Friday, 16th May: Sunny and bright, becoming warm with high pressure and a light ESE 2 in mid-May. Not the sort of day then to be indisposed due to a tummy bug... but that's the situation I find myself in! With a forecast of generally south/east based winds over the next few days, conventional wisdom would say that if there is to be another movement of Pom Skuas (the so-called 'second wave theory' championed by Chris Janman), then this should be the period. Let's hope so, but time will tell; don't forget that Poms will often appear when nothing else is moving.....meanwhile I'm fretting whilst confined to barracks (OM)
Selsey Bill: 0535-1100: (CS,CRJ,DF,JD,DS/Brian Smith) Bright and sunny, light breeze
Great Northern Diver - 7os
Great-crested Grebe - 1E
Gannet - 5E, 1W
Fulmar - 1W
Common Scoter - 202E, 3W, 44 os
Eider - 4os
Whimbrel - 16E
Greenshank - 1N
Grey Plover - 2obs
Sanderling - 8E,12W
Herring Gull - 900 os (per JA)
Black-headed Gull - 9E, 5W
Common Tern - 63os, 7E
Little Tern - 10os, 2E

Church Norton: Quiet this morning - just a few Whitethroats and Blackcaps singing, and 2 or 3 Whimbrel and 30+ Dunlin in the harbour.
Late this afternoon there were 2 Common Sandpipers on Tern Island, at least 6 Sanderling amongst 200+ Dunlin and 2 Sandwich Terns, 10 Little Terns and 8 Common Terns in the harbour.(AH)

North Wall: Went to check out the report of a Marsh Warbler singing on the Breach Pool, but sadly only a showy, if somewhat washed out & grey-toned, Reed Warbler was singing where it had been reported. Unfortunately the bird heard over the last couple of days has not been seen, so Sedge Warbler remains a possibility, and this individual did no mimicry whatsoever. Otherwise quiet - a few other Reed & Sedge Warblers about, plus a single Wheatear seen, and the spit was even quieter, though 3-4 Whimbrel and up to 5 Little Terns were noted. Also quite a few Peacock & Comma butterflies about. (AH) 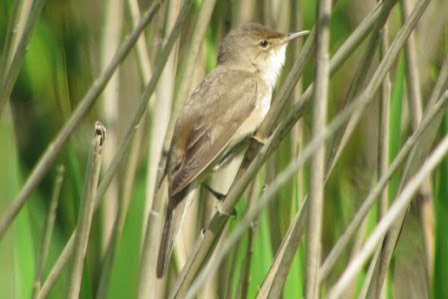 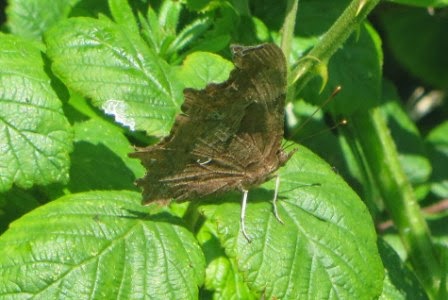 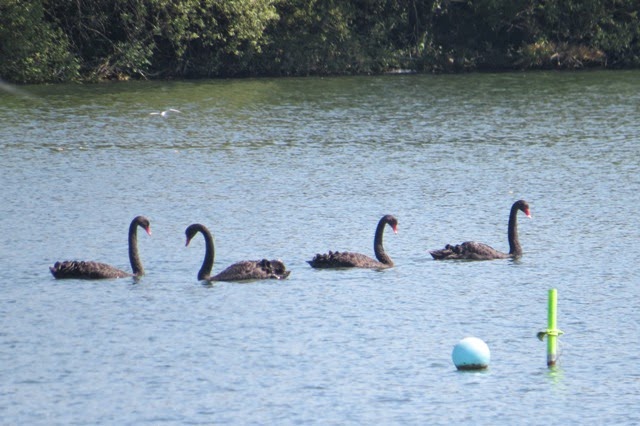 Black Swans on Ivy Lake (B. Ives)
Thursday, 15th May: Finally a turn to the east for the wind, and seemingly a big clear-out of yesterday's birds. However there was a major consolaton in the form of a Hooded Crow at the Bill this morning...... it only stayed about an hour on the shingle bar (with other crows), but was eventually forced off by the rising tide covering the bar - when it then flew off high to the NE. Whether this is a one-off, or it will return with the other crows at low tide, remains to be seen but there must be a reasonable chance it will re-appear on the Peninsula. The news was put out but please understand there was plenty of phone difficulty; our apologies to anyone we overlooked (CRJ/OM/AH). 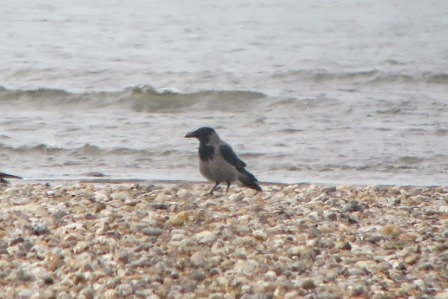 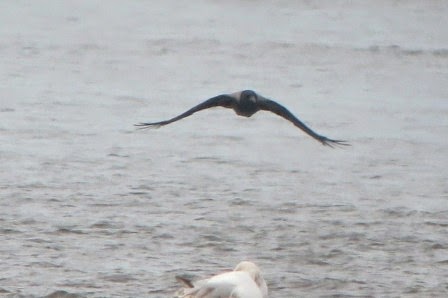 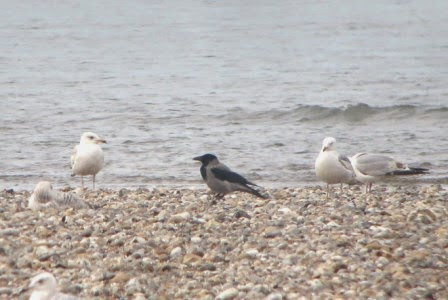 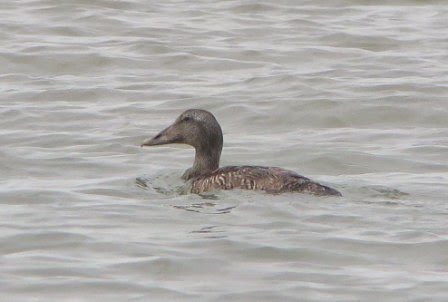 No sign of the Hooded Crow this evening off Hillfield Road, but a huge flock of up to 200 Common Terns feeding just offshore, plus at least a dozen Little Terns amongst them. (AH/SH) 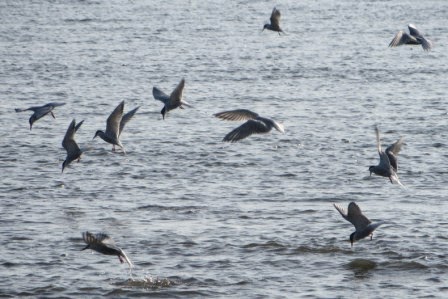 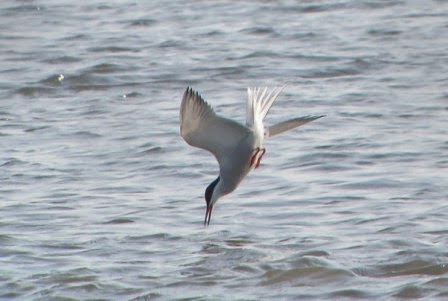 
Medmerry: Around the Breach area and pools - a Yellow Wagtail over, a Wheatear, 2-3 Little Terns offshore, 12 Sanderling on the beach, 5 Black-tailed Godwits and 9 Whimbrel. (PH) Just a stunning drake Mandarin on the pools at 8:30 this morning to add to PH's report ! (PS).


Church Norton: Very quiet this morning - seemingly all of yesterday's migrants hve moved on and even the resident Whitethroats and Sedge Warblers were quiet. In the harbour there were 9 Knot, 5 Whimbrel, 25 Grey Plover and 50+ Dunlin. (AH) 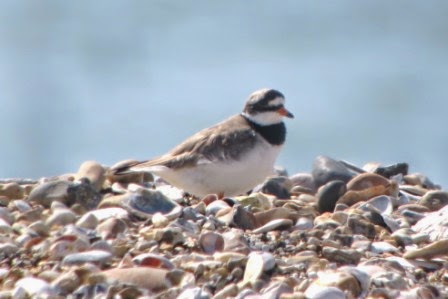 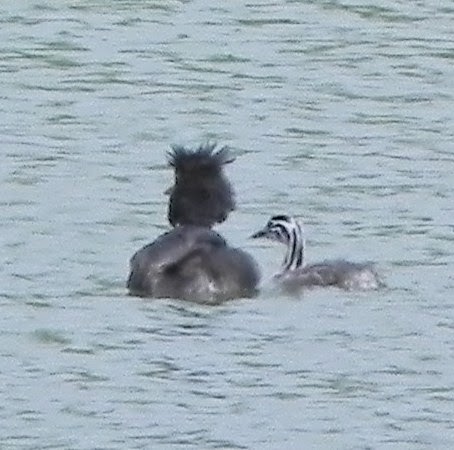 Ivy Lake: Four (!) Black Swans today on the water, plus a dozen or so Common Terns (PC/BC) 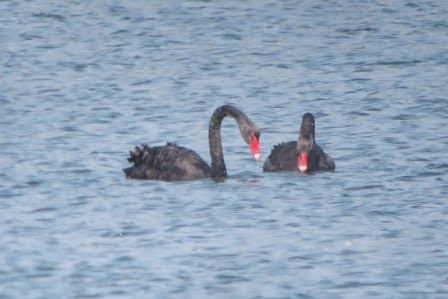 Wednesday, 14th May: Another  bright morning but with a subtle shift in the wind from west to light north-westerly - and not for the first time this unpromising wind direction managed to produce a few migrants, including quite a few Spotted Flycatchers and Whinchats. There was only a single record of the latter species for the whole of last spring on the peninsula; this year there have certainly been in excess of forty records already! 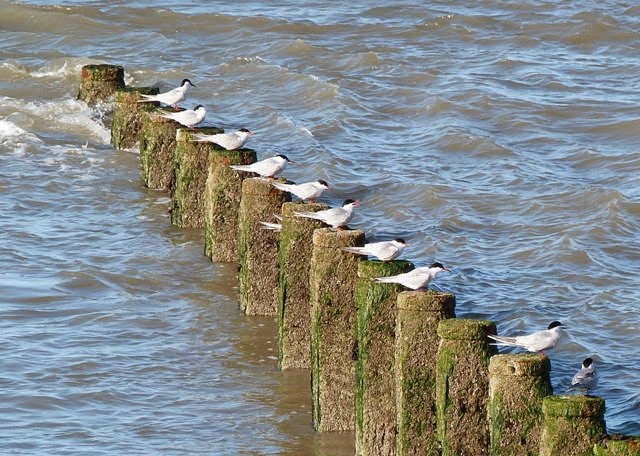 Line-up of resting Common Terns at the Bill (OM) 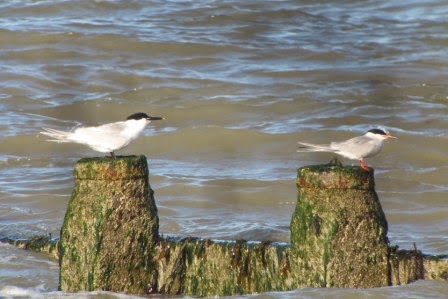 Sandwich & Common Tern (above) & Wheatear at the Bill (AH) 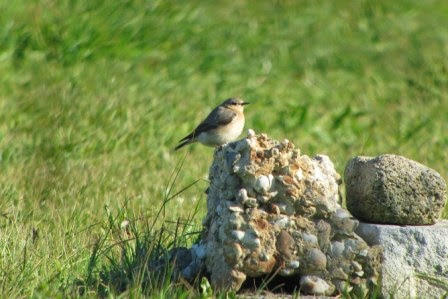 Selsey: After  twice checking the gardens around the Bill, I decided to pay attention to other potential migrant spots in and around the village, even re-visiting some old haunts I've not looked at in a good while. Nothing special, but a number of migrants located....(OM).
Northcommon Farm: At least 4 Spotted Flycatchers located, plus a Cuckoo, several Whitethroats and 2 Buzzards.
Warner Lane paddocks: Just 2 Red-legged Partridges, a Sparrowhawk and a couple of Whitethroats today were the best I could do.
Crablands Meadow (Drift Lane): A Spotted Flycatcher, 2 Reed Warblers, several Whitethroats, a Willow Warbler and Garden Warbler were all present in or around the clump of sallows; the latter warbler was showing well over several minutes but managed to evade my best photographic efforts by hiding behind vegetation at the wrong times! (OM)
Later, a Wheatear in the Warner Lane paddocks, 2 Spotted Flycatchers in the large marshy area along Drift Lane.  Across Mill Lane in the field I call Coastguard Field were 2 Whinchats, 1 Wheatear and a Swallow perched on the fence near the stables. At Northcommon Farm it was hard to keep track of the Spotted Flycatchers as they hunted from both sides of the hedge and frequently disappeared amongst the blossom; I counted 3 for certain but there were probably 4 (SR). 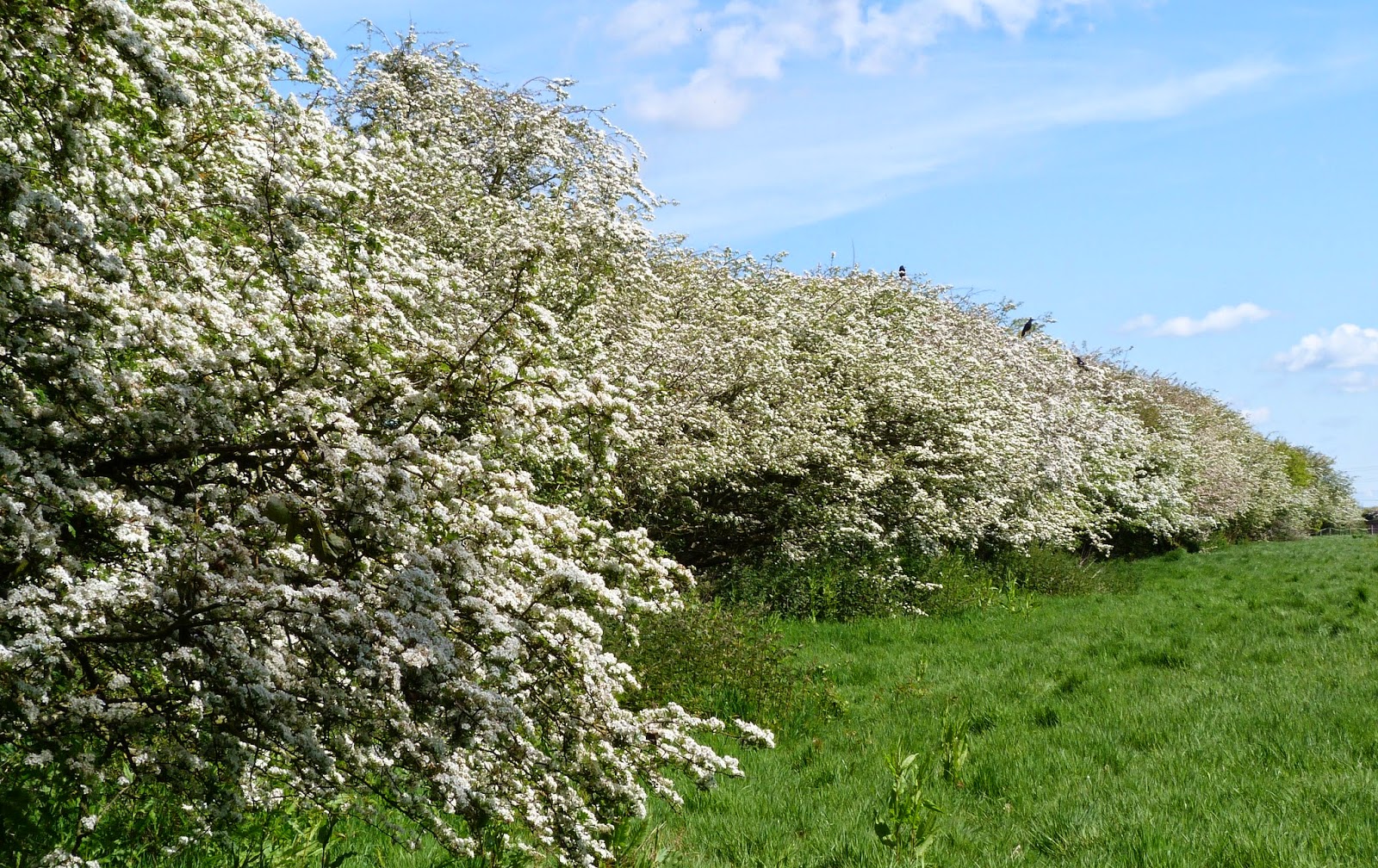 Northcommon Farm in bloom: the hawthorns and hedgerows in their full spectacular glory (OM)
Ferry Pool: A Common Sandpiper, 3 pairs of Tufted Duck, 6 Gadwall and 80 Black-tailed Godwits this morning. (AH)


Church Norton: A few migrants this morning including a fine pair of Garganey on the second Several, up to 4 Whinchats along the first Several, a Spotted Flycatcher by the concrete wall, a female Redstart in the churchyard, several Sedge Warblers singing from unlikely bushes, and up to 10 Wheatears on the beach. There was also a juvenile Peregrine, which settled by the concrete slabs late morning. Given that our local Peregrines have barely hatched their eggs yet, it is likely this is a young bird dispersing from some way south of us. (AH)
The pair of Garganey still present this evening, plus a minimum of eight Whinchats along the front of the horse's field. (S&SaH) 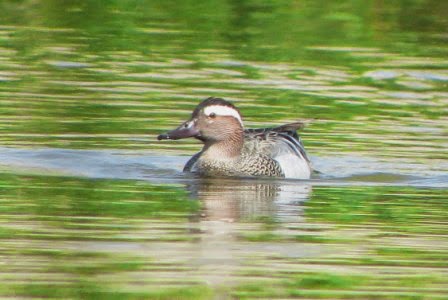 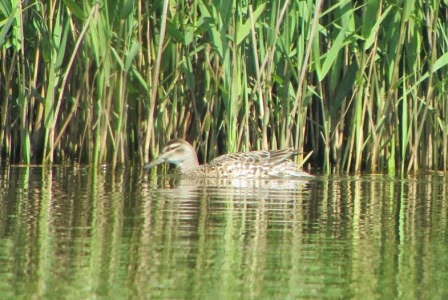 Pair of Garganey (above) & Whitethroat at Church Norton (AH) 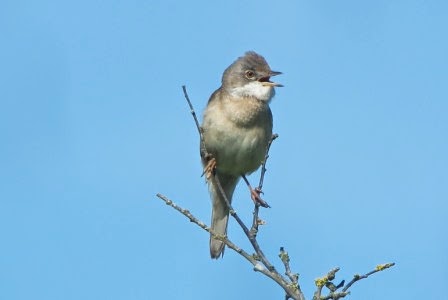 North Wall: At least 6 Spotted Flycatchers at Welbourne. My favourite flooded field contained just 1 Shelduck. Apart from 2 Little Egrets the Breech Pool had the same cast as yesterday. Over the fields a Peregrine was giving a Common Buzzard a hard time. White's Creek has become Swan Lake with some 20 Mute Swans loafing around the sluice area. Cuckoo calling north of Honer  (JW). 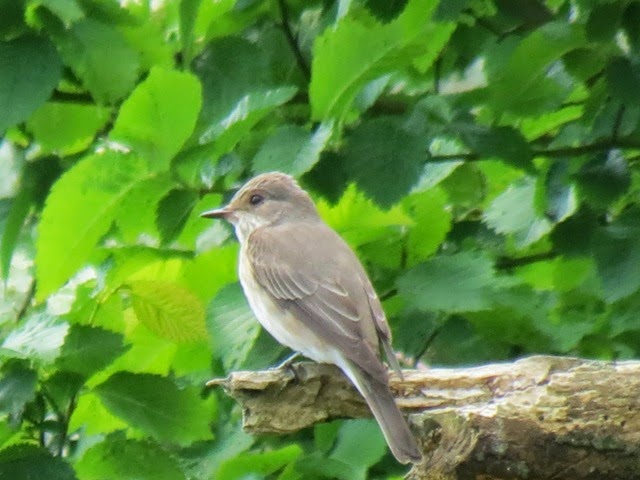