Friday, 9th May: Another blustery day with the wind from the south-west, but despite that a few birds were to be seen by those prepared to brave the elements.... with the surprise reward of a Pom. There was also another surprise, in the form of a couple of amendments to the noticeboard (near the bench), which appeared overnight having been added by ......some unknown wag, draw your own conclusions! (OM). 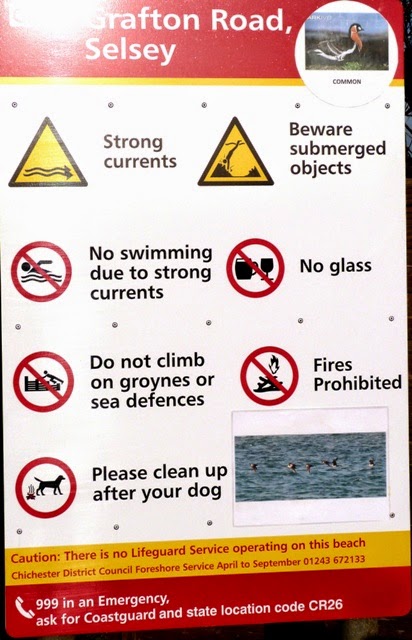 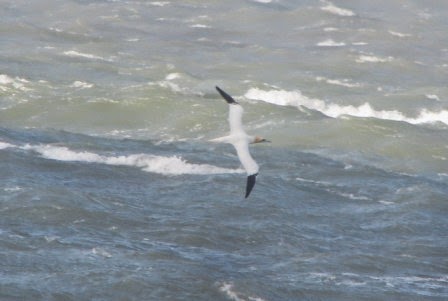 Gannet past Selsey Bill (AH)
Church Norton: Highlight was an Osprey over the harbour at 9.15, that worked its way slowly towards the Ferry. Otherwise it was more of the same, really; 6+ Sanderling, 8 Knot, a big flock (4-500 birds) of Dunlin, a dozen or more Whimbrel and Bar-tailed Godwit, and at least 6 Little Terns. (AH) 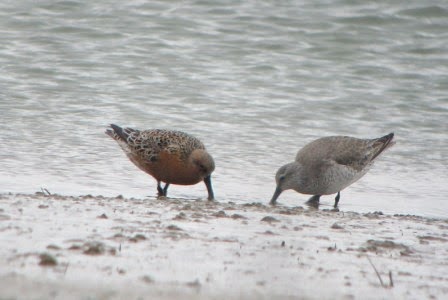 Knot (above) & Sanderling with Dunlin at Church Norton (AH) 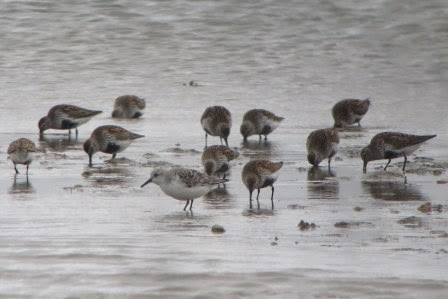 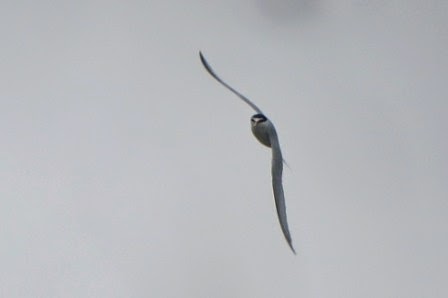 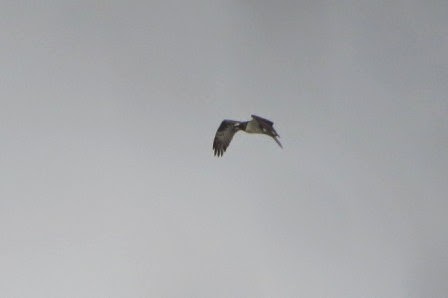 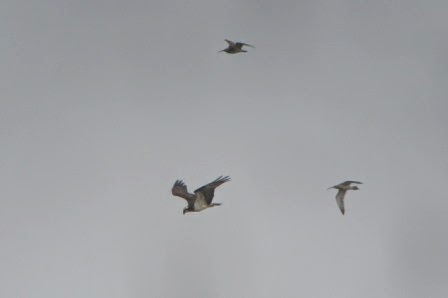 North Wall: Seemed that everything was keeping a low profile in a brisk SW breeze. The field north of the stables held 52 Black-tailed Godwits, 2 Whimbrel, 4 Lapwing, 4 Shelduck and 4 Greylag Geese. No sign of the LRP. A flock of 90 mixed Gulls there, mainly Herring Gulls. On the Breech Pool 10 Tufted Ducks, 2 Gadwall and I Great Crested Grebe (the other one, hopefully, is sitting on eggs). To date I have seen no Moorhen, Coot or Mallard young on the Pool (JW).
Ferry Pool: At least 50 Swifts and 20 Swallows feeding over the pool this evening. (AH) 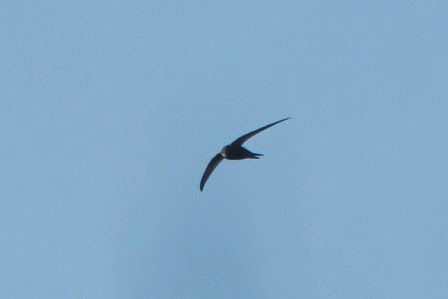 Swift over Ferry Pool (AH)
Thursday, 8th May: A wet and windy morning, with a brisk WSW wind and a forecast of heavy rain for a good part of the day. It is worthy of mention that there have been a number of colour-ringed birds reported on the Peninsula this year, notably Sanderlings and Black-tailed Godwits, many of which have originally been ringed just over the border in Hants. The latest report concerns the latter species, with a bird ringed at Farlington Marshes (Langstone Hbr) on 15th Oct 2013 and seen by SR on the Ferry Pool on 25th Apr 2014, presumably on the start of its migration. Whilst not everyone agrees with ringing, such records do provide interesting information so it's always worth reporting such sightings. (SR has asked if colour-ringed Godwit sightings could be noted and sent to the following: pmpotts@tiscali.co.uk )
Selsey Bill: Closed this morning! One Gannet west in 25 minutes in terrible visibility. (AH)

Church Norton: Not much to report beyond the mudflats, but quite a few waders on the falling tide; approximate totals as follows - 8 Knot, 8 Sanderling, 80 Black-tailed Godwit, 20 Bar-tailed Godwit, 12 Whimbrel, 8 Curlew, 400+ Dunlin, 4 Sandwich Tern and 6 Common Tern. BFF and DS found a Little Stint amongst the Dunlin after I departed. (AH)
This evening I couldn't find the Little Stint amongst several hundred Dunlin, but there were 18-20 Sanderling amongst them and a first-summer Little Gull flew up through the harbour. (AH) 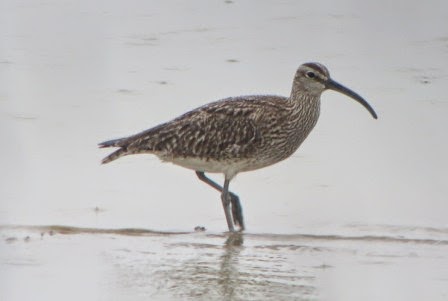 Whimbrel (above) & Knot in the rain at Church Norton (AH) 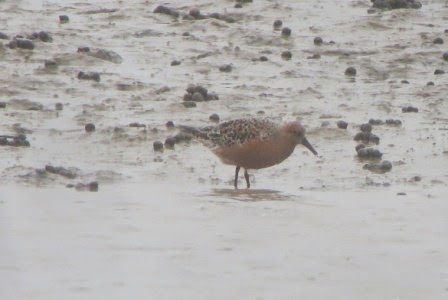 Ferry Pool: 4 Dunlin at the back, plus a Common Tern and 20 Swallows this morning. (AH)

Chichester Gravel Pits - On Westhampnett Pit up to 40 Common Terns feeding over the water plus a few hirundines (AH). A further visit early afternoon found the terns still present but also lots more hirundines; 200+ House Martins. 100+ Swifts and lesser numbers of Swallows with a few Sand Martins (OM). Around the Ivy Lake complex, a female Red-crested Pochard (presumably this is the one present during the winter, but where does it disappear to for weeks at a time?) on the small pit at the eastern end, along with 200+ Swifts, 100+ Swallows and half a dozen Common Terns. (AH) 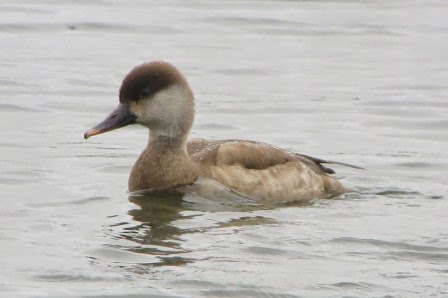 Red-crested Pochard on Ivy Lake complex (AH)
Wednesday, 7th May: A date formerly known as 'National Pom Day' by those involved in the Pom King challenge due to its consistency in producing that species, though with a fresh to strong west-south-westerly today the odds may be against it this year. On the subject of Poms, for those interested a full breakdown of Monday's spectacular has been added, showing times, flock sizes and even spoon-sizes! Prepared by JA, it now appears on the 'Selsey Bill Migration data' page - just click the link on the title bar.
Meanwhile, back to today, and not a Pom to be seen in the brisk WSW..... 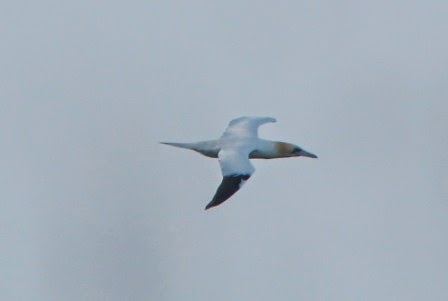 Gannet (above), Fulmar & Little Tern at the Bill (AH) 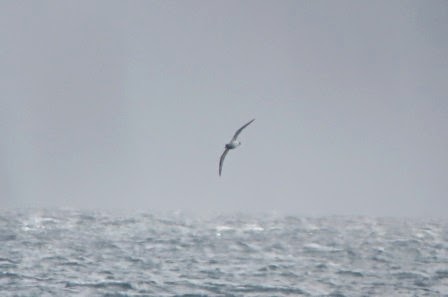 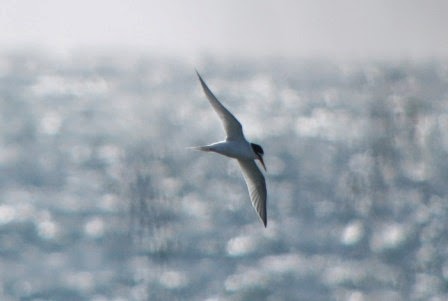 Church Norton: A big mixed flock of waders out in the centre of the harbour, consisting of approximately 500 Dunlin, 40 Ringed Plover, 25 Grey Plover, 20 Bar-tailed Godwit, 2 Sanderling, and 4 Knot, and there were still at least a dozen Whimbrel scattered around the mudflats. Very little to report from the bushes in the windy conditions except a delightful family of ten or so freshly fledged Long-tailed Tits by the hide. (AH) 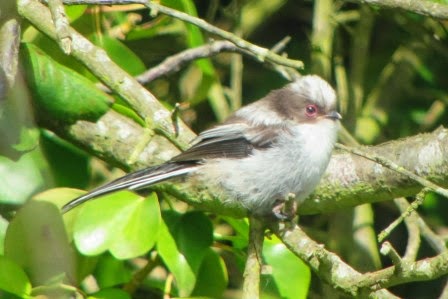 Long-tailed Tits fresh from the nest at Church Norton (AH) 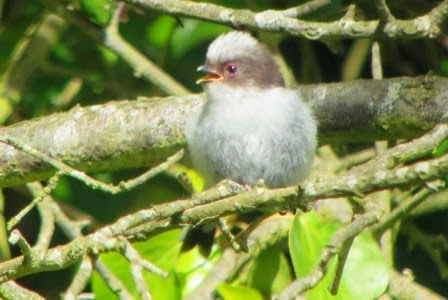 Late this afternoon in the harbour, there were similar numbers of waders (though there were 5 Knot), but also 8 Sandwich Terns, some of which were getting a bit flirtatious, plus 10 Common Terns and 4 Little Terns. (AH) 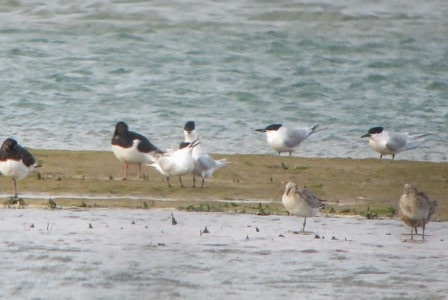 Sandwich Terns (above) & a mixed flock of Knot, Dunlin & Bar-tailed Godwit on the falling tide (AH) 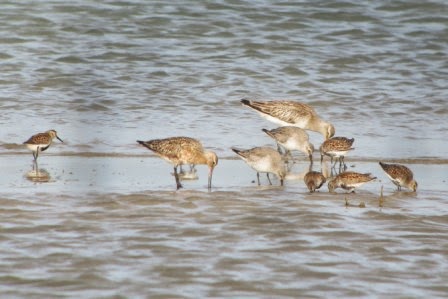 Peninsula round-up: Today a Little Gull off Church Norton, Cuckoo and displaying Lapwing south of Fisher Farm, a pair of Garganey at Ferry Pool, whilst this afternoon at Chichester Pits 100s of Swifts, many Common Terns (20+?), a Hairy Dragonfly and a female Red-crested Pochard. (Yesterday at 1510 a Red Kite over South Mundham). (Alan Payne)
Posted by Birderowen at 08:55