Sunday, 25th May: Bright and sunny with scattered cloud and a fresh breeze, SSW 4. The following info has been released by the RSPB so can now be repeated here, but what a fantastic start for Medmerry:

Medmerry: The pair of Black-winged Stilts is still attempting to nest on the Earnley Flood Storage Pool, and a 24-hour RSPB watch is now in place. If you would like to volunteer to help, we are organising a rota of 4-hour shifts (6am-10, 10-2, 2-6 and 6-10) and would welcome more help. We have a great welfare unit for volunteers courtesy of the Environment Agency's contractors, Team Van Oord, with cover and toilets. We also have the opportunity for paid night cover (10pm-6am, 3-5 nights/week). If you are interested in either day volunteering or night work and would like to know more or be allocated a spot on the rota, please contact me or the Medmerry and Pagham Harbour team at this email address (adrian.thomas@rspb.org.uk) or via RSPB Pagham Harbour 01243 641 508.
If you are just visiting to see the birds, the best parking is just south of Earnley Concourse on the hardstanding opposite where the new RSPB car park will be, but please do not block the gates either side. It is then a 30 minute walk - go down the track opposite to the new floodbank and then turn right and walk down to the beach. Sorry, we do not have permission to allow any visitors to enter the welfare unit or toilets. Please note that the road beyond the new Earnley car park is STRICTLY private for vehicle access - please do not abuse that and upset our neighbours. Many thanks. Adrian Thomas, RSPB.
Selsey Bill 0610-1000hrs: Mainly sunny, wind SSW 5-6. (Obs: JA/AH/SR et al) Five Arctic Skuas going east was the highlight, with the latter 3 all joining together. Otherwise small numbers of Gannets, Common Scoters and Terns, some apparently moving about rather than through. Full log below...
Great Northern Diver - 3 os
Fulmar - 1W
Gannet - 10E, 24W
Eider - 5 os slowly drifted W
Shelduck - 1E
Common Scoter - 50E, 35 os
Sanderling - 2W
Turnstone - 6 ob
Arctic Skua - 5E
Common Tern - 4E, 8 os
C/A Tern - 7E
Sandwich Tern - 13E, 6 os
Kittiwake - 4W
Auk sp - 1E
Ferry Pool: Two Avocets this morning, along with 40 Black-tailed Godwits, 6 Gadwall and 4 Redshank, plus a few Swifts over. (AH)

Church Norton: Not much change from yesterday. A few Curlew and Shelduck viewable on the high tide and two Sandwich Terns along with half a dozen Common Terns around Tern Island was it for the harbour. Along the west side, 2 different calling Cuckoos, 4 Reed Buntings, 20+ Linnets, plenty of Whitethroats, and a bit of song from the Reed and Sedge Warblers in the Long Pool. (AH) Also a Hobby at the Severals late morning (SH) and two 1st-summer Little Gulls reported from 'Pagham Harbour' on Birdguides. 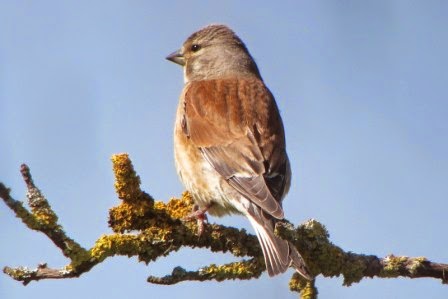 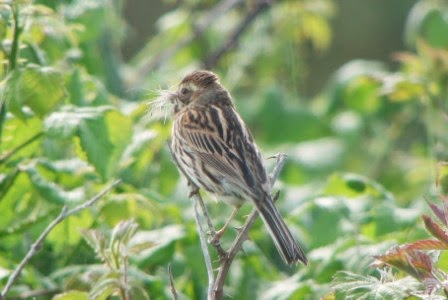 Medmerry (0600-1000hrs): Three Sanderling, 2 Dunlin, 4 Little Ringed Plovers, 7 Avocet chicks, a Hobby, 2 Wheatears and 2 Corn Buntings (SH)
Chi GPs: Drayton Pits: Nothing unusual when I visited, the most obvious birds being Swifts, with c.50 present. Three pairs of Canada Geese had 20 young between them, and a further 12+ Canadas and 4 Greylags were loafing about on the opposite bank and partly obscured from view by vegetation; doubtless there will be additional young in due course. Other wildfowl included 9 Pochard (four pairs and a female) and 18 Tufted Ducks, plus a pair of Mute Swans with 7 cygnets. Additional sightings included a Buzzard, 2 Stock Doves, a Green Woodpecker, 2 Grey Herons and 2 Little Egrets, whilst at least 7 Reed Warblers, 2 Cetti's Warblers and several Whitethroats were all in song. At Westhampnett no hirundines bar a couple of Swallows, but 5 Common Terns and a sixth bird which I'm sure was an Arctic, with its translucent wing panel, clean pencil line to the primary edges and long tail; trouble was it remained at the distant west end most of the time due to the watersports activity before deciding to drift off high over the A27 (presumably towards the private pits opposite) (OM). 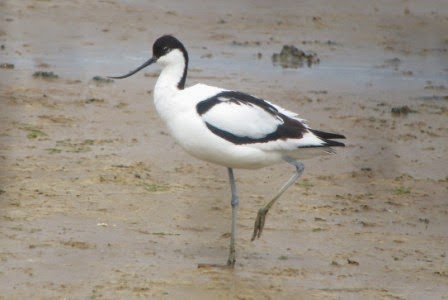 Avocet on the Ferry (AH)
Medmerry: A Hobby flew over low, along with 3 Dunlin, 6 Turnstones and 2 new Avocet chicks. (S&SaH) An Arctic Skua chased a Sandwich Tern over the beach before moving off E this afternoon (OM).

Fishbourne Creek: A few birds along the harbour this morning, but not a single wader amongst them. There was a loose group of 8 Brent Geese at the top end, 12 Great Crested Grebes, 150+ Mute Swans and a Black Swan with them, 8 Shelduck and 7-8 Lesser Black-backed Gulls. Along the path there was a Reed Bunting, a Cuckoo, a pair of Linnets, a Blackcap, 5+ Whitethroats and a calling Cetti's Warbler, and around the riding school up to 5 Yellowhammers in with a couple of Linnets and 20+ each of young Goldfinches and Greenfinches, plus numerous Swallows and one House Martin. (AH) 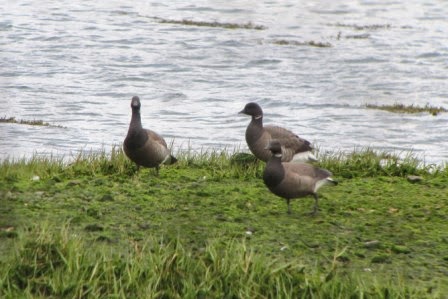 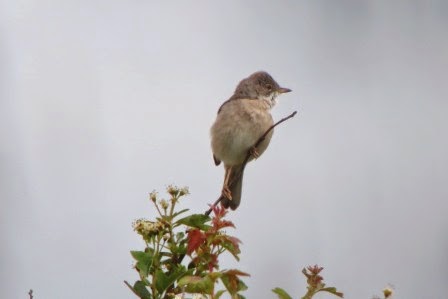 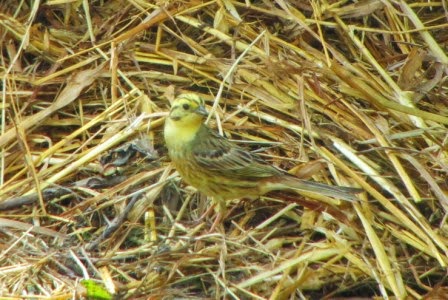 Church Norton: Early evening there was still a Whimbrel in the harbour, along with 20+ Curlew, whilst 4 Little Terns and 10 Common Terns were feeding near Tern island. Also a Cuckoo and 2 Linnets present. (AH) 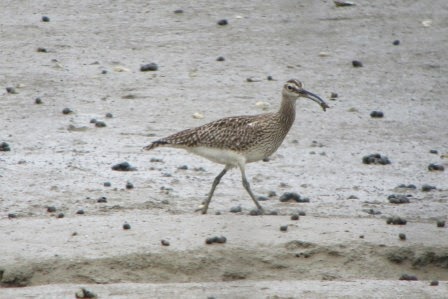 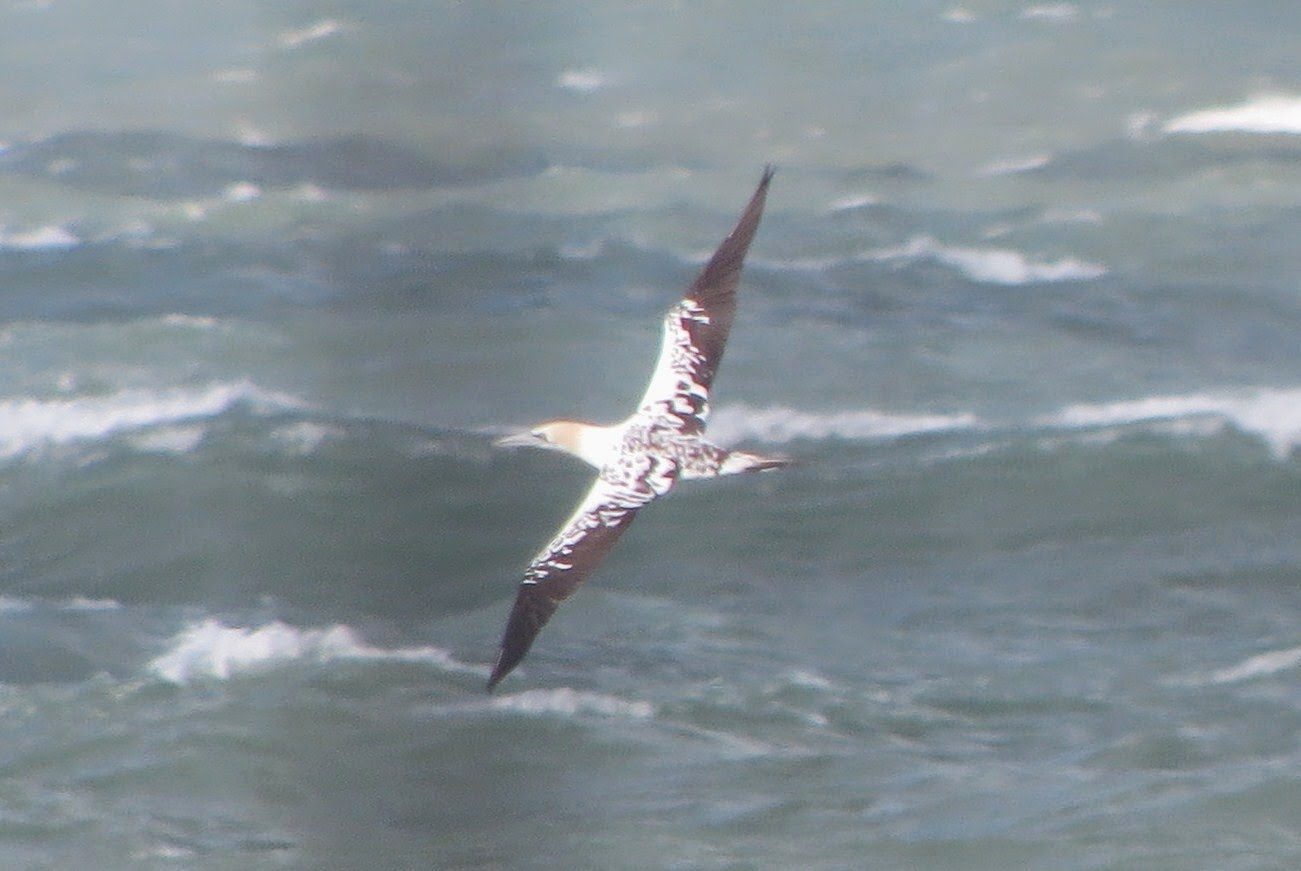 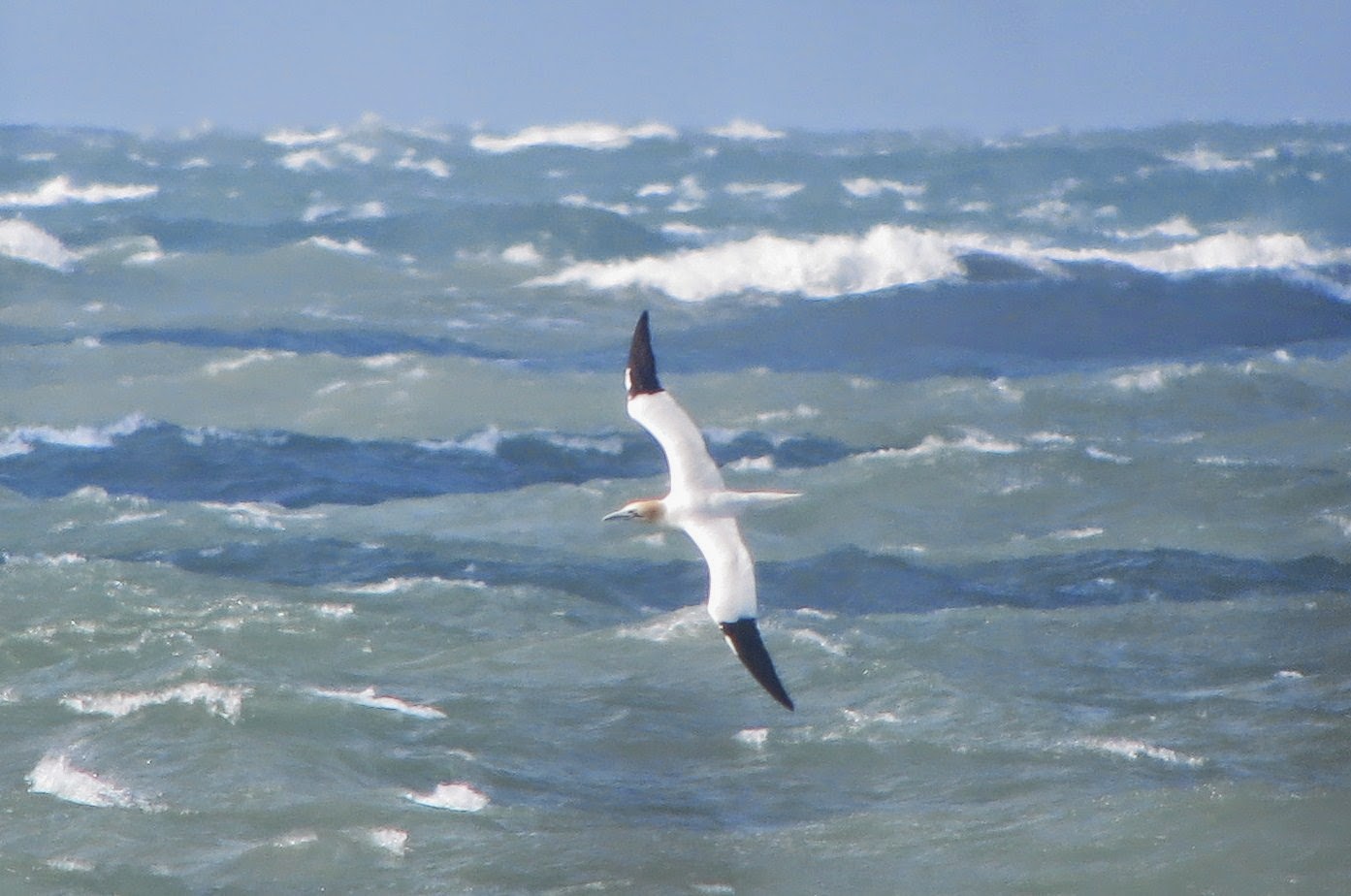 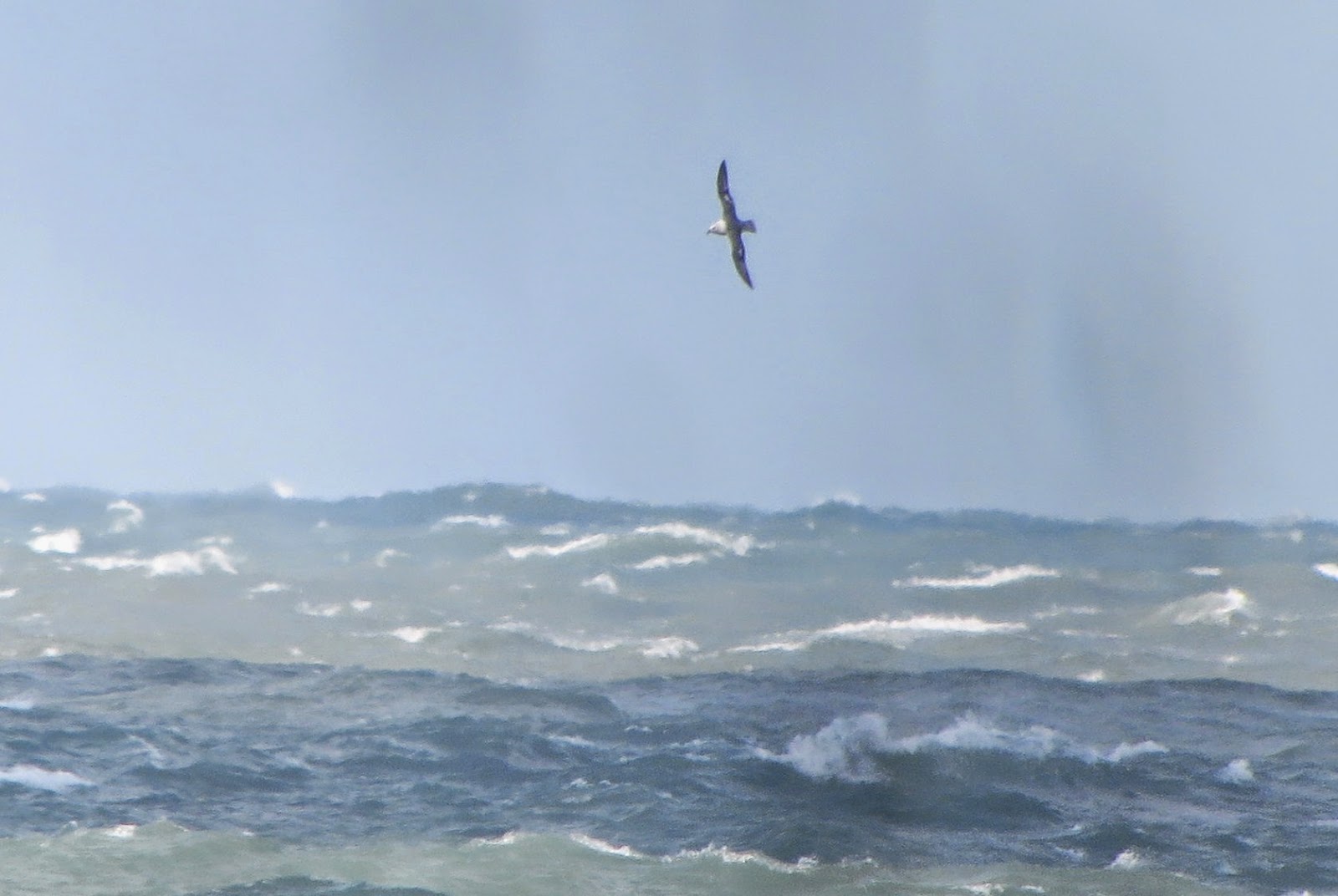 Ferry Pool: Two Avocets again this morning, plus the usual Black-tailed Godwit flock and half a dozen Gadwall. (AH)

Church Norton: The strong wind was keeping birds low, though A&YF heard a Willow Warbler early on, and there was a Cuckoo near the Mound and two more along the west side, along with a Reed Bunting and several Linnets. A single Whimbrel and a half dozen Curlews was about all the harbour could offer. (AH) 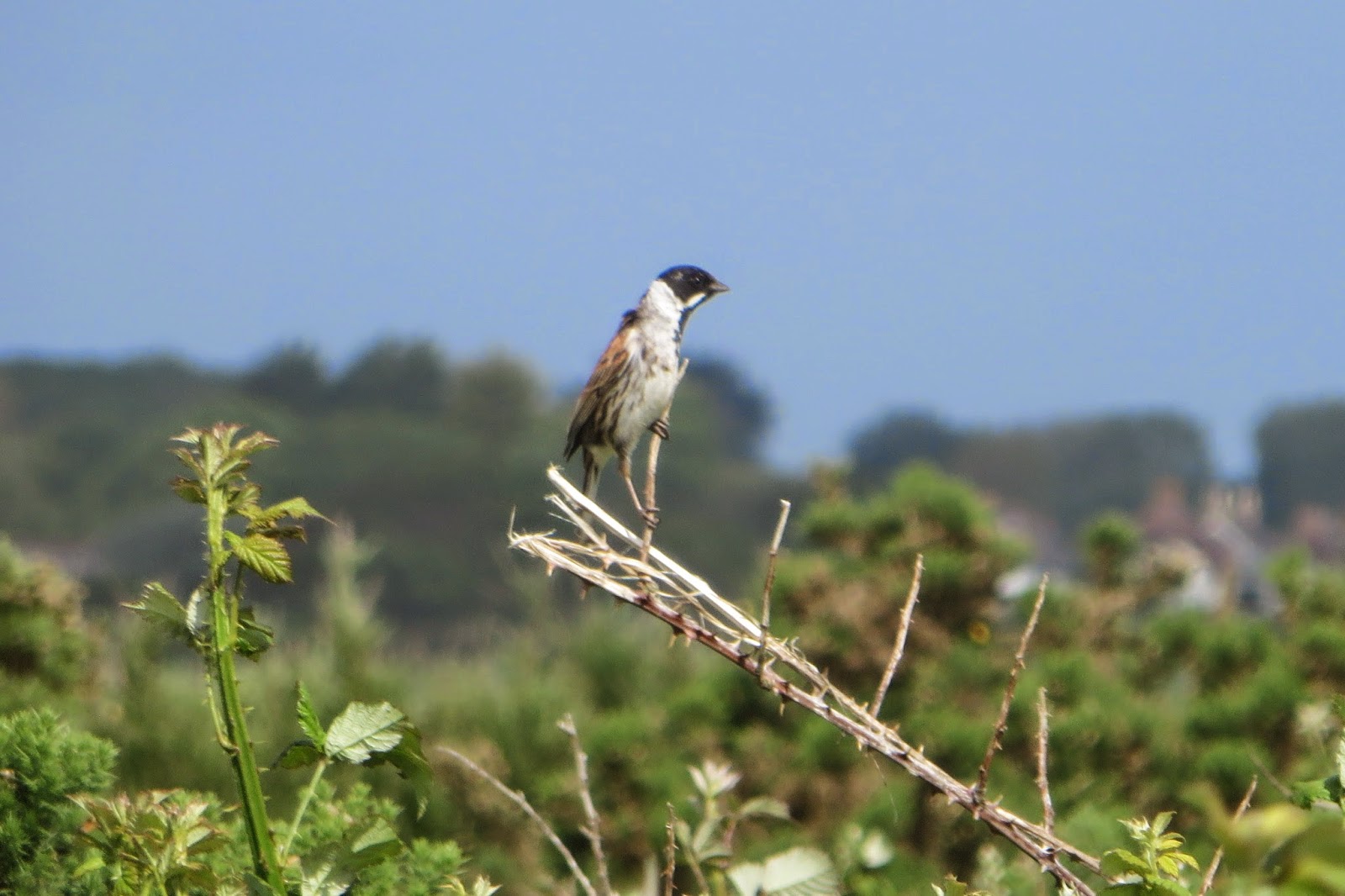 Reed Bunting at Church Norton (AH)
Posted by Birderowen at 10:16