Sunday, 21st September: More of the same weather wise - see yesterday's weather headline - though if anything the wind is more definitely NE today and a tad stronger. The North / East coasts of the UK continue to groan under the weight of rarities whilst the South / West can only look on enviously. Our day will come however, so let's just hope it is soon. 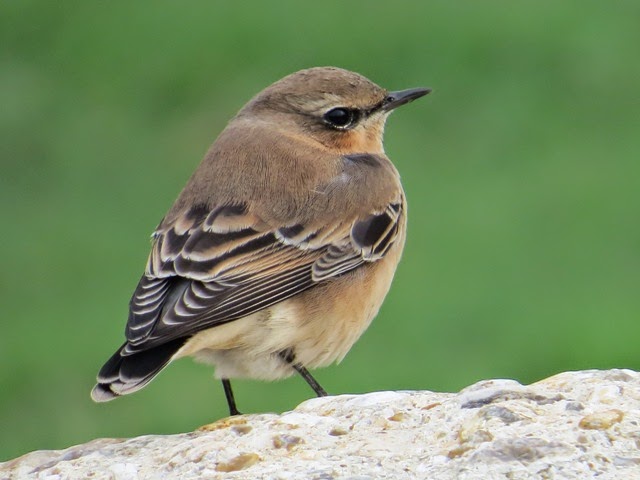 Wheatear at Selsey Bill (SH)
Selsey: Northcommon Farm: Rather too breezy for any small birds with the brisk NE rasping through the trees and keeping everything low. All I could find were 2 Goldcrests, 4 Chiffchaffs, 2 Buzzards and 2 Sparrowhawks. It was a little better at Warners Lane.  I covered the horse paddocks and Chainbridge fields and initially little was apparent, but eventually a few migrants were located in the sheltered spots... a reluctant Redstart, 2 Spotted Flycatchers, a Yellow Wagtail, a Whitethroat, a Wheatear (possibly a Greenland), a dozen Chiffchaffs and 20 Meadow Pipits. A small stream of Swallows and some House Martins passed overhead and local birds included a Great Spotted Woodpecker, 3 Buzzards, 2 Sparrowhawks and 2 Kestrels - one of the latter catching a large rodent which it immediately took to the top of an electricity pole and devoured (OM). 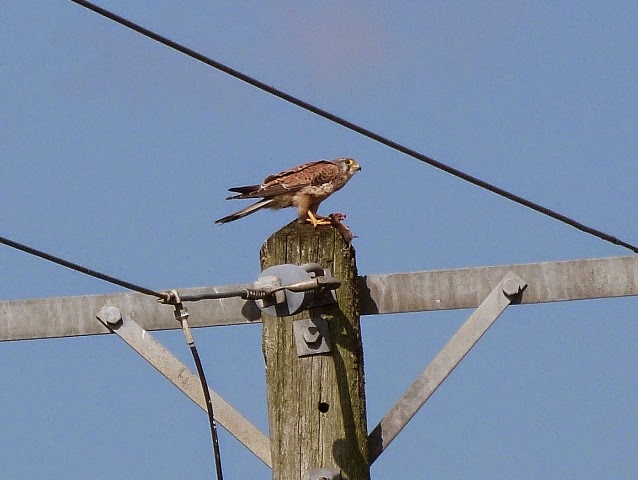 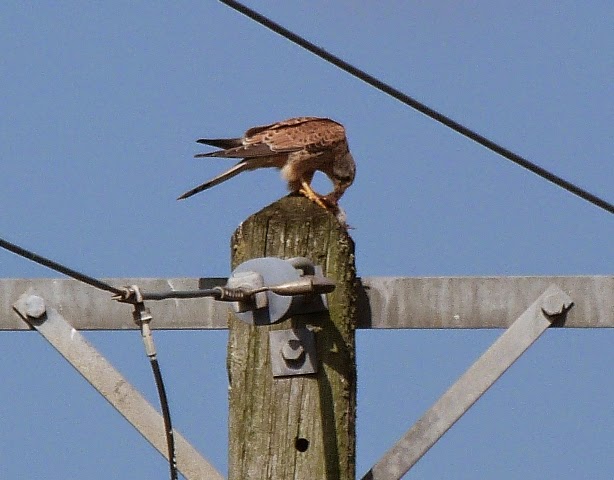 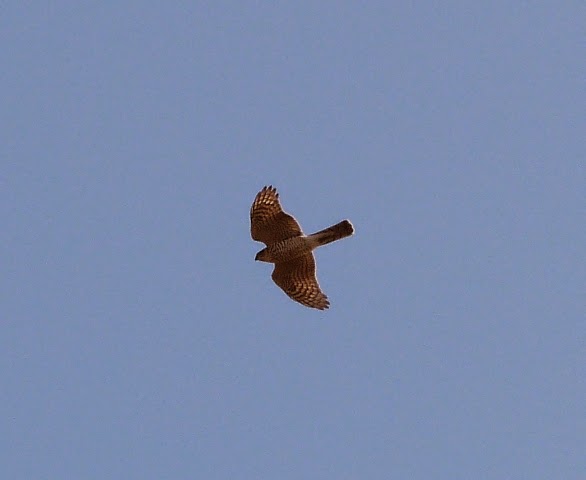 Sparrowhawk (above) and distant Redstart (well it was the best I could do!), Warner Lane (OM) 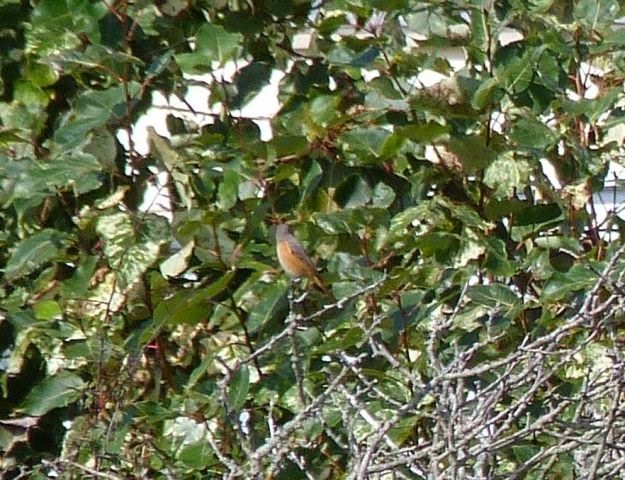 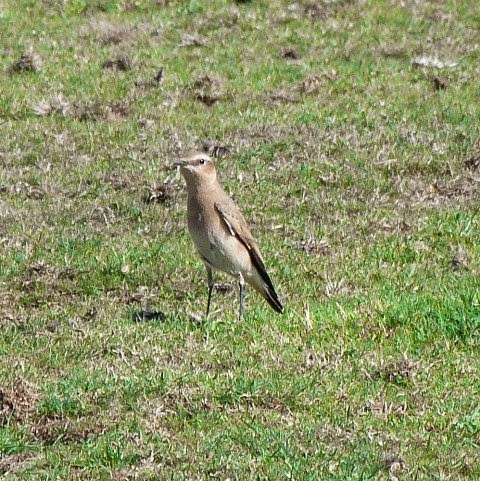 Wheatear at Warner Lane (OM). This bird was interesting, but appears paler in the photo than it actually did in the field so any hopes of something rarer were soon dismissed. It was however quite long-legged, upright and bold-looking with a prominent supercilium and fairly extensive colouration, so is perhaps a good candidate for a Greenland-race bird?

Ferry Pool: Six Avocets present this morning but otherwise much the same; 16 Black-tailed Godwits, 1 Snipe, 2 Green Sandpipers and 45 Teal. At least 4 Wheatears were present at the back of the pool in Ferry field (OM). 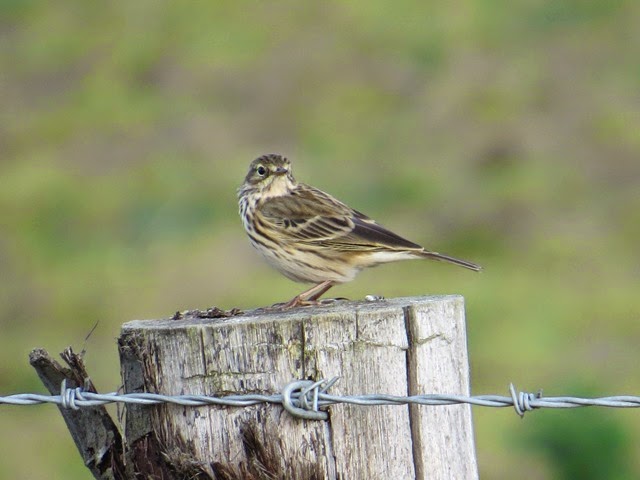 Saturday, 20th September: No great change in the weather prospects at the moment; unseasonably warm with light E/NE winds, generally dry conditions with perhaps the odd thundery shower, high cloud and periods of sunshine. Birding in the South can be a frustratingly quiet affair at this time of year in these conditions..... needless to say though the North and East coasts of the country are reaping the rewards, with multiple arrivals of such avian delights as Red-breasted Flycatcher and Greenish Warbler. However in due course some of these goodies may yet filter down our way in days to come, so keep on checking those sheltered spots - and do let us all know if you strike gold! First news today comes from Pagham North Wall where a Great White Egret was flushed from Pagham Rife... not gold perhaps, but still scarce enough to be considered a rarity.

North Wall: The highlight this morning was a Great White Egret flushed from alongside Pagham Rife near the pumping station. As soon as I came into its view it took off and flew NNE and out of my view. At the sluice gates there were 40 or so Swallows feeding and moving eastwards later they were replaced by almost the same number of House Martins. On White's Creek were a pair of Great Crested Grebes. On the Breach Pool - 2 Kingfishers, 1 Water Rail, 83 Teal, 2 Tufted Duck, 2 Common Snipe, 3 Reed Warblers and 1 Sedge Warbler. At Marsh Farm 1 Spotted Flycatcher and 1 Chiffchaff. Honer Reservoir held a Coot, 1 Tufted Duck and 2 Little Grebes. In the nearby hedgerow came a large mixed tit flock, numbering at least 30 birds and which contained 18 Long-tailed Tits, 4 Willow/Chiffs and a Blackcap, with 4 Jays in the same area  (JDW). 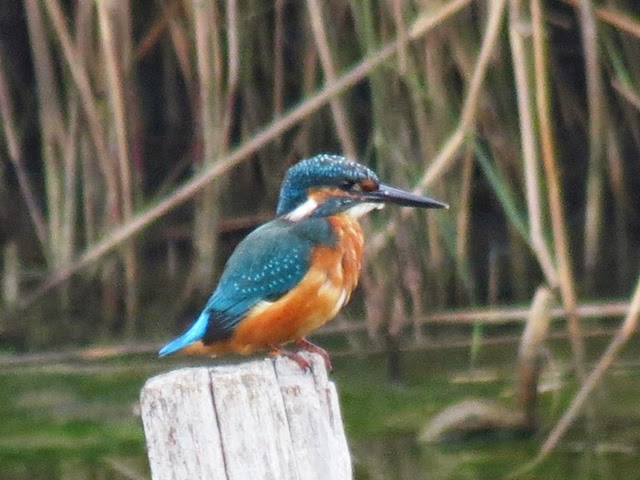 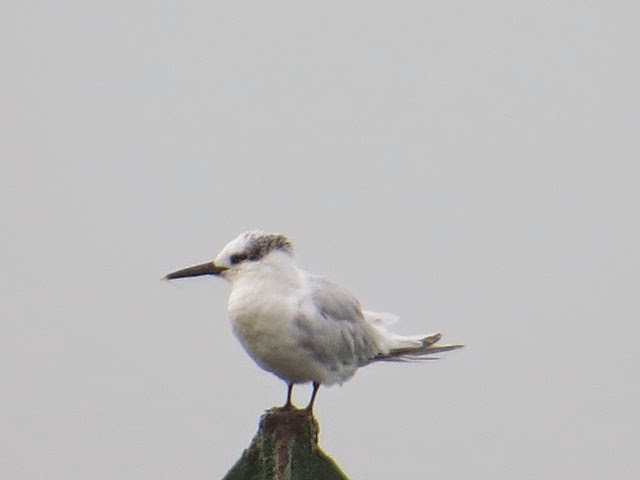 Sandwich Tern at the Bill (SH)

Church Norton: (walk from east Selsey):
Brent Goose - 1
Pochard - 1 on second Severals (fairly uncommon here)
Sandwich Tern - 6
Also: 1 Stonechat, 2 Wheatears, 50+ Meadow Pipits, 20+ Chiffchaffs, 1 Willow Warbler,
50+ Swallows, 10 House Martins and 20+ Long-tailed Tits (S&SaH).
In addition to the above, an early morning walk produced one large wave of about 75 Swallows heading north up the peninsula, plus a couple of Whitethroats in the bushes opposite the first Several and a Redstart in Park Lane. There were also 7 Brent Geese flying through the harbour, a Jay by the first Several and a number of Siskin (c.40?) moving north in small flocks - the latter being the first such report of the autumn (IP). 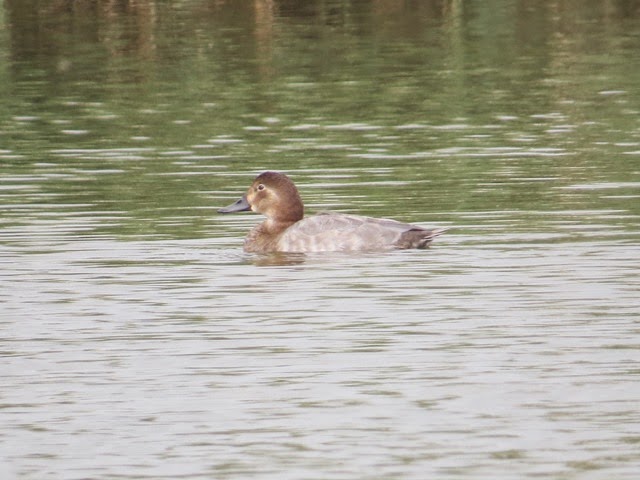 Pochard and Stonechat at the Severals, Church Norton (SH). 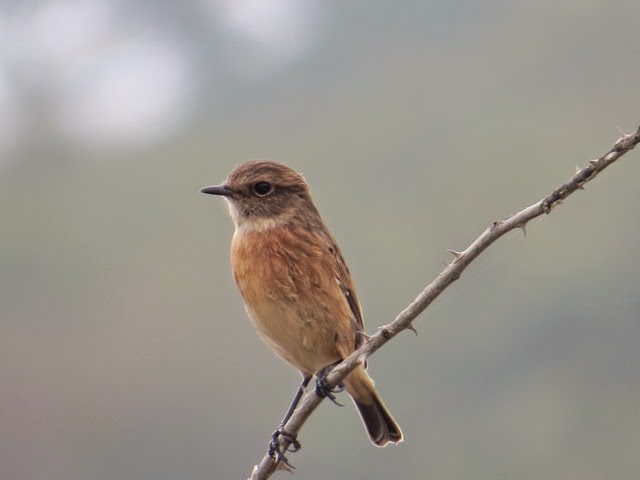 West side: an evening walk produced a Whinchat, a Stonechat, 450+ Wigeon that flew into the harbour, a Hobby, several Grey Partridges and 6 Roe Deer (S&SaH)

Friday, 19th September: Some welcome rain overnight gave way to a dull, misty and drizzly start, the day gradually improving to give a warm and sunny afternoon, though with a few lingering misty patches in some places. There was also less wind today, with a fairly gently E/NE2 throughout. It was also the day that the old 'Sunday club' reconvened, with Mervyn Jones (from Wales) and Eric Soden (from Surrey) linking up with Chris Janman and yours truly for a pleasant day's birding around the Peninsula, although it was not exactly heaving with avian excitement! (OM).
Selsey Bill (0640-1000hrs) Murky, ENE2, gradually brightening (Obs: JA/GH et al). Fairly routine today, the best being a Hobby that departed out to sea.
Gannet - 9E
Brent Goose - 9W
Little Egret - 1E
Turnstone - 12 ob
Kestrel - 1E
Hobby - 1S
Common Tern - 14E
Sandwich Tern - 4E, 6 os
Med Gull - 12 os
Pied Wagtail - 2E, 1W
Yellow Wagtail - 1E
Meadow Pipit - 163E
Linnet - 84E
Swallow - 13E
Chiffchaff - 3 gardens
Selsey - Northcommon Farm: We made a short visit but drew a blank here, although later BI logged 2 Spotted Flycatchers there. At nearby Warner Lane / Chainbridge field there were 2 Spotted Flycatchers and a Cetti's Warbler (OM/CRJ/ES/MJ).

Ferry Pool: Three Green Sandpipers this morning, plus a tight group of 4 Spotted Redshanks which soon flew off together heading towards the harbour. Otherwise much the same as the last week or more, with 16 Black-tailed Godwits, a Dunlin, 4 Avocets, 40 Lapwing and 30 Teal (OM/CRJ/ES/MJ).

North Wall: Disappointingly few waders on display here today. An early afternoon visit to catch the falling tide failed to produce any Curlew Sandpipers in White's Creek and little more than a handful of Dunlin, 30 Ringed Plovers, c.50 Black-tailed Godwits, singles of Greenshank and Spotted Redshank, 100 Wigeon and 12 Pintail along the east side. The Breach Pool held just a handful of Black-tailed Godwits and 5 Snipe,  with 2 Whinchats on fence posts at the back of the pool, a Reed Warbler, a Yellow Wagtail over and a Wheatear along the path (OM/CRJ/ES/MJ/DS). 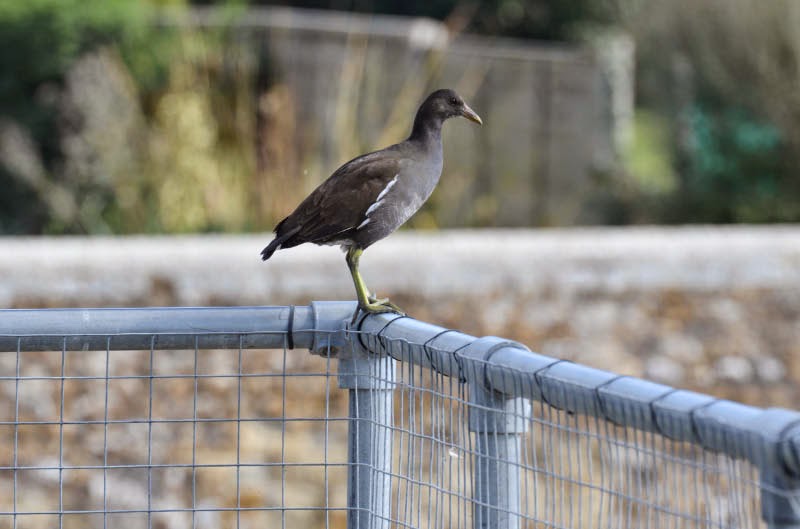 Wot... no waders! This bold Moorhen on the sluice fence accompanied us as we scanned White's Creek with little success! (CRJ).
Church Norton: At least 10 Spotted Flycatchers along the path and at the back of the hide (BI). An evening walk to Norton produced 2 Brent Geese W, a Sandwich Tern, a Grey Wagtail, 3 Wheatears, 4 Chiffchaffs and 50+ Swallows (some going out to sea 1830hrs) (SH).


Medmerry:  Breach - Viewpoint: It was very pleasant for the elderly gentlefolk of the Sunday club to be sat in the sunshine whilst birding from the new benches, scanning the pools and the area beyond. In between a lunch break and the periods of pleasant banter some watching was achieved and we logged 7 Bar-tailed Godwits, 5 Dunlin, 10 Knot, 6 Ringed Plovers and a single Curlew on the mudflats in front of us, whilst a single adult Yellow-legged Gull and 3 Sandwich Terns were amongst the roosting gull flock there. There were 15 Common Terns, another Sandwich Tern and 6+ Med Gulls offshore at the mouth of the Breach and a single Sanderling on the beach there. On the rough ground and area around the rubble piles were 5 Wheatears, 5 Yellow Wagtails, c.15 Meadow Pipits and two large flocks of Linnets totalling c. 500 birds (OM/CRJ/ES/MJ). 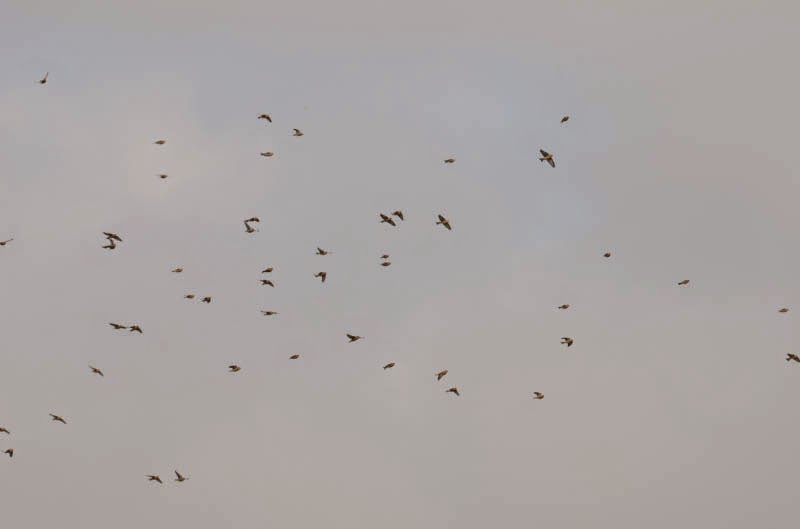 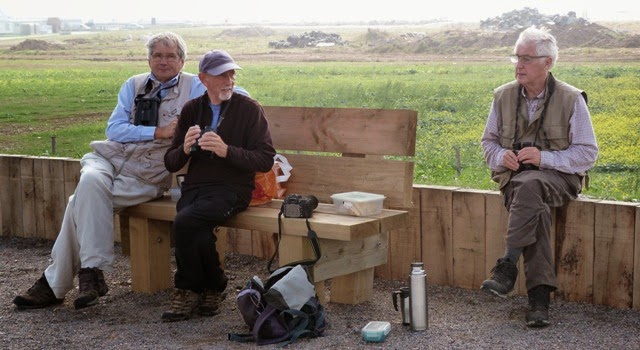 l-to-r Messrs Jones, Janman and Soden take lunch at the new viewpoint and discuss the issues of the day (OM) 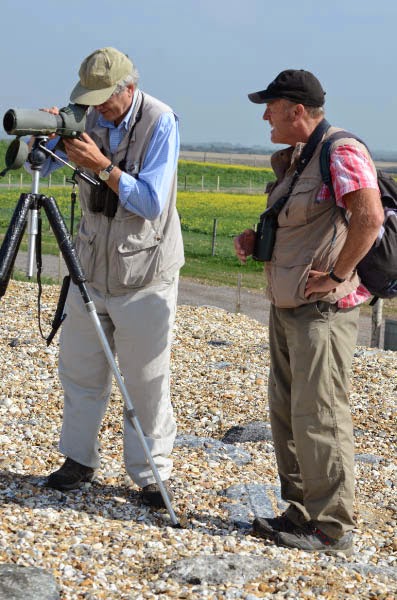 Mr Jones commandeers OM's scope to view the waders just after the latter had made a hasty duff call and realised it wasn't a Curlew Sand but a Knot! (CRJ)
Posted by Birderowen at 18:06