Tuesday, 30th September: The month ends with another pleasant day, after a gloomy start, with even a drop or two of rain....


North Wall: The Cattle Egret was still present at 6.30pm yesterday evening, behind the Breach Pool, along with a calling Tawny Owl in Owl Copse, but was not there early this morning. (JW)
Early pm, on the flow tide six Spotted Redshank, four of which were on the Breach Pool awhile, two Curlew sandpipers, two Greenshank, 34 pintail and all four resident raptor species. In the gull roost ca. 40 Mediterranean Gulls, several adults of which were colour-ringed, green predominating. Also 6 Brent Geese in the harbour and 50+ little Grebes on the Lagoon (ARK per SOS)
Ferry Pool: Quite a bit of activity this morning, the highlight being a very obliging Water Rail in the reeds by the road. A Common Sandpiper was nearby, and the Little Stint was back in residence. Also there were 4 Green Sandpipers, 5 Dunlin, 5 Avocets, 12 Black-taiiled Godwits and 75 Lapwings present, with similar of the latter on the nearby ploughed field, and 3 or 4 Jays along the hedges. (AH) 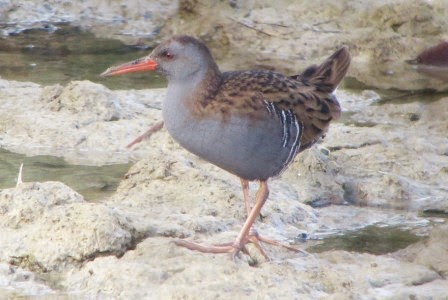 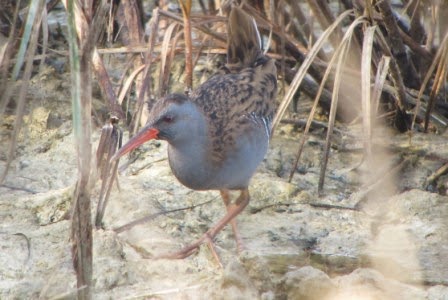 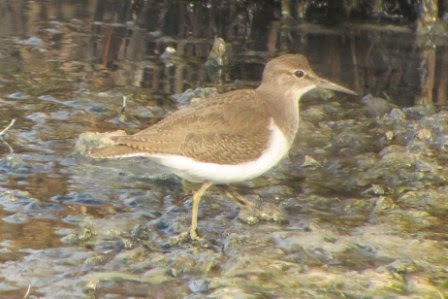 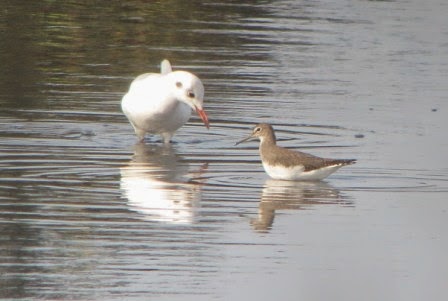 Long Pool/West Side: There were still a few migrants this morning, including 4 Wheatears, 5+ Stonechats, 8+ Blackcaps, 5+ Chiffchaffs and 2 Swallows over. There were also about 10 Reed Buntings present, half a dozen Goldcrests in the big mixed flock, 50+ Meadow Pipits and 8 Skylarks in the fields, a Grey Wagtail flew over, a Buzzard and a Sparrowhawk seen, and a Grey Plover, a Black-tailed Godwit, 40 Redshank and 100+ Teal in Ferry Channel. (AH) 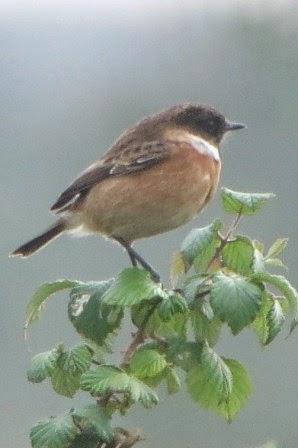 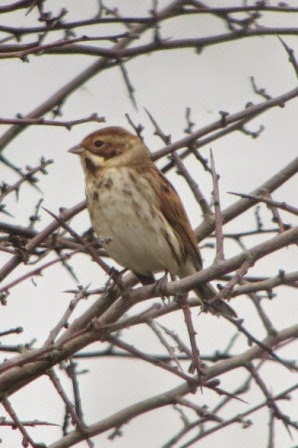 Stonechat & Reed Bunting along the west side of the harbour (AH)

Monday, 29th September: A very grey, gloomy start with some heavy drizzle, before brightening up a little.... And there was another Turtle Dove!

Park Farm, Selsey: Amazingly, after waiting all summer for a Turtle Dove on the peninsula, another juvenile appeared this evening, on wires at Park Farm. (S&SaH) 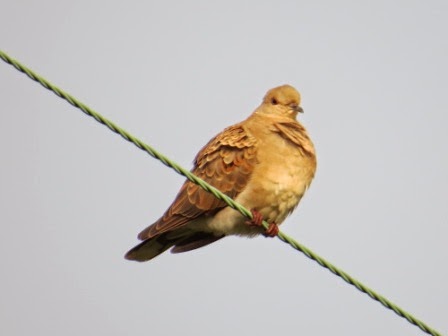 Medmerry: Ham Farm area - the Turtle Dove was reported  this morning near Greenwood Farm, but had not been relocated by late morning.
Sadly there was no sign of the Turtle Dove at Ham this afternoon.. A party of 4 Stonechats was the highlight, also seen were 5 Yellowhammers, c40 Swallows, 2 Kestrels, 27 Stock Doves, 17 Med Gulls. (SR)

West Sands/breach area - There were 3 Wheatears this morning, plus 50 Meadow Pipits and several hundred Linnets, in the pools there were a single Knot with 80 Dunlin and 30 Ringed Plover, and on the beach about 80 Mediterranean Gulls. (AH) 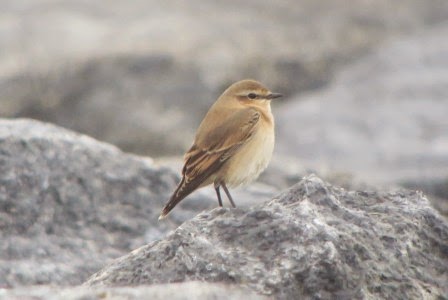 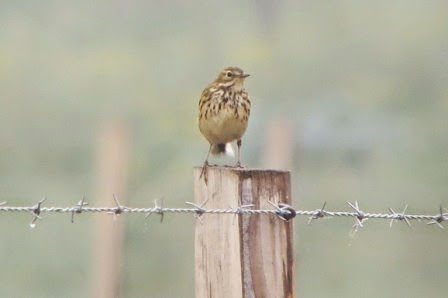 Church Norton: Quiet in the drizzle, with about 5 Blackcaps, 10 Chiffchaffs, 5 Meadow Pipits, 5 Jays and a Great Spotted Woodpecker being the only birds noted. (AH)
This evening there were a Peregrine, a Sparrowhawk, a Wheatear, a Blackcap, 10+ Chiffchaffs, 20 Swallows and around 60 Magpies (possibly inward migrants?) (S&SaH) 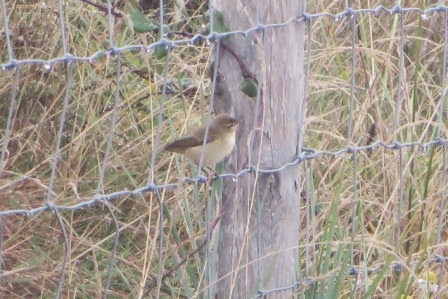 Chiffchaff at Church Norton (AH)
Ferry Pool: No Little Stint or any Avocets this morning, though there were still 2 Green Sandpipers, a Common Sandpiper, 2 Snipe, 4 Black-tailed Godwits, 6 Dunlin and 30 Lapwing present, along with 22 Teal and a Grey Heron.
This evening 4 Avocets were back on the pool and 2 Kingfishers were in Ferry Channel. (AH) 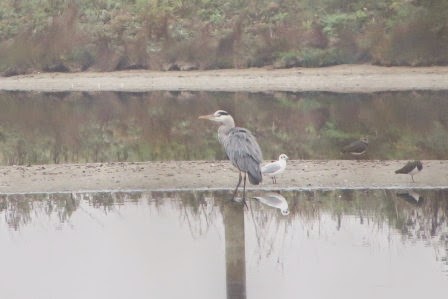 Grey Heron on the Ferry (AH)


North Wall: The SOS site has had reports of a  Cattle Egret in the fields north of the North Wall with cattle over the last couple of days, but no reports as yet from our regular observers.... (AH)
After the rain there were lots of birds about, but no newcomers. Not a single wader on White's Creek. On the Breach Pool were 12 Common Snipe, 109 Black Tailed Godwits and 2 Spotted Redshanks. A Little Egret there was feeding on the carcass of a Black-headed Gull. Very few migrants - just a handful of Chiffchaffs and a single Sedge Warbler, whilst several Cetti's Warblers were in good voice. A few Swallows were still moving through eastwards, in the back fields there were 300 Rooks and close to a hundred Jackdaws, and there were 5 Jays about. (JW) 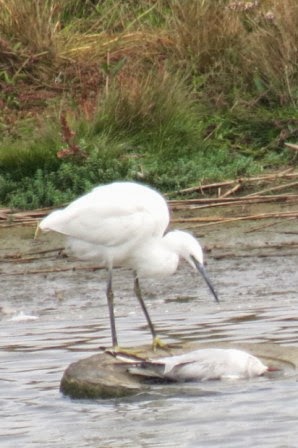 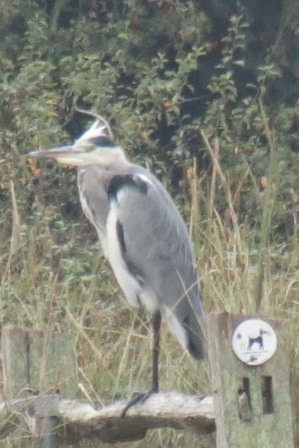 Jay 1 in gardens
Linnet - 63E
Chaffinch - 20E
Clouded Yellow - 1 present
Medmerry: Ham Farm - A big surprise this evening in the form of my first (and sadly, probably my only) Turtle Dove on the peninsula this year. Initially it was skulking in the hedgerow very near the farm buildings, but then sat out on the wires with a few Linnets and Chaffinches. It appeared to be a juvenile.
Not much else to report - a single Whitethroat in the bushes, and 3 Sandwich Terns and 30 Dunlin seen distantly at the breach. (AH) 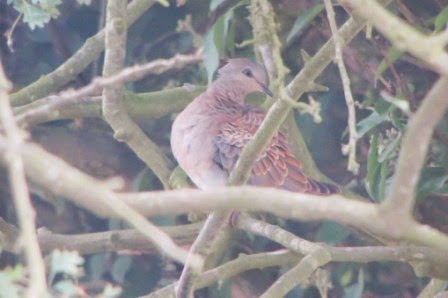 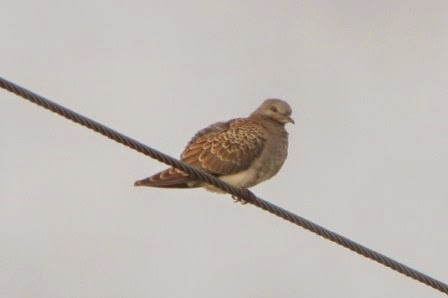 A walk along from the Earnley Concourse car-park produced a hunting female Marsh Harrier, a Little Stint on the Stilt pool, a Whinchat, 6 Wheatears and a couple of Stonechats. (A&YF/RJS)

Ferry Pool: The Little Stint was still present with 5 Dunlins, and there were also still 2 Green Sandpipers, 1 Snipe, 6 Avocets, 4 Black-tailed Godwits and 45 Lapwing. A group of 3 Shoveler were new in, and several of the Teal are coming out of eclipse plumage. (AH) 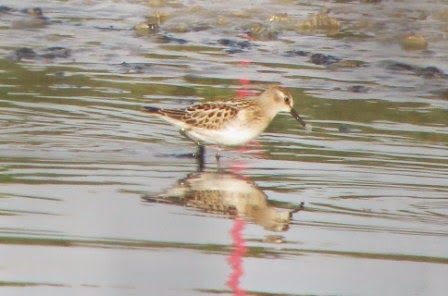 Little Stint (above) & with Dunlin, Shovelers & Teal on the Ferry (AH) 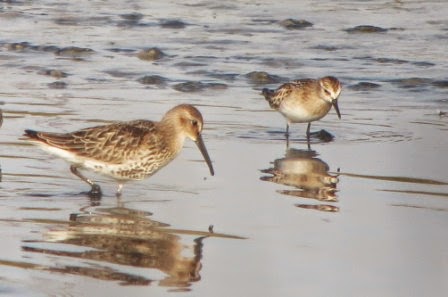 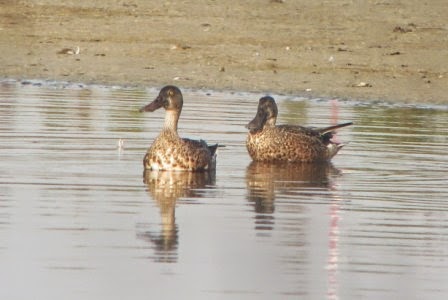 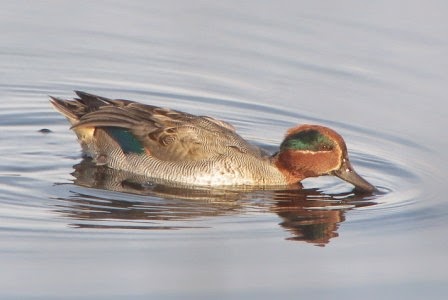 Church Norton: Very quiet on the migrant front - just a Whitethroat and two or three Blackcaps in the bushes to be found. There was a steady movement of Meadow Pipits (200+) east, along with c20 Pied Wagtails and c30 Linnets, a Yellow Wagtail headed south-west, and there were 4 Sand Martins amongst 100+ Swallows and 20+ House Martins overhead, plus a couple of Sparrowhawks. In the harbour there were a pair of Brent Geese and the Whimbrel, along with single Knot and Black-tailed Godwit and 30+ Grey Plovers. (AH/IP) 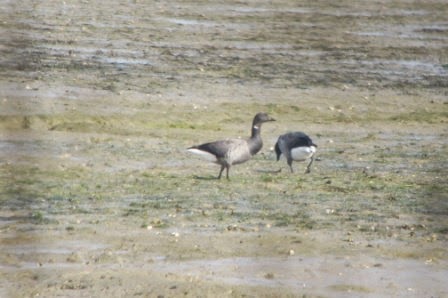 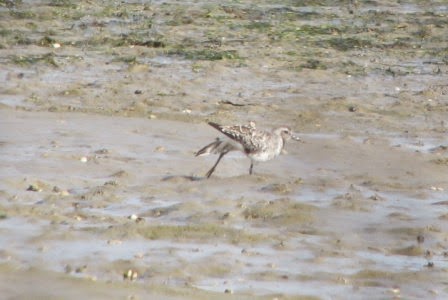