Wednesday, 24th September: A little rain overnight giving way to a bright but cool morning with cloud and hazy sunshine and a light W/NW breeze. As we birders approach the eagerly anticipated month of October, now it the time for a bit of advance notice. Some of us (me included) will very soon feel the urge to visit places afar in search of rarities, thus there will be fewer regulars on the patch, but more importantly the daily collation of information for the blog will also be under strain, with much of the burden (as ever) falling on AH's shoulders. Trying to output news on a daily basis is a demanding task and both of us have commitments, so it may be that some  reports will need to be abbreviated for a while..... we haven't yet missed a daily report and will do our best to avoid it, but it's bound to happen sometime. If this should occur please be understanding and things should return to normal once the silly (Scilly?) season is over! (OM)
Ferry Pool: The Little Stint present again this morning, along with 2 Green Sandpipers, the Snipe, 7 Avocets, 6 Black-tailed Godwits and 30 Lapwing. (AH) 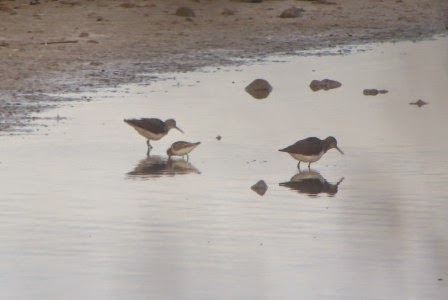 Little Stint and Green Sandpipers on the Ferry (AH)


Church Norton: Still a few migrants about, though mostly keeping low in the wind. There was a Spotted Flycatcher by the concrete wall, and between there and the along the west side at least 20 Blackcaps, a dozen Chiffchaffs and 2-3 Whitethroats.
Also A&YF reported a Merlin over the churchyard and a Redstart by the horse's field.
Other less obvious, but likely, migrants included up to 5 Jays, a couple Song Thrushes and 10+ Blackcaps around the hide/churchyard area. Five Brent Geese flew into the harbour from offshore and there was still a Whimbrel, plus a couple of Bar-tailed Godwits in the harbour, and a couple of hundred each of House Martin and Swallow constantly overhead.
There were also 2 Clouded Yellow butterflies on the beach by the first Several. (AH) 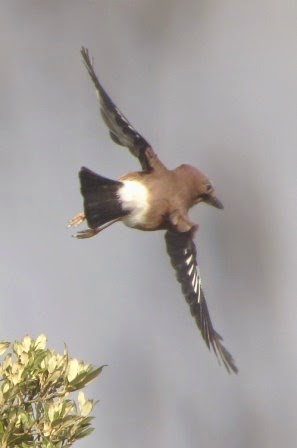 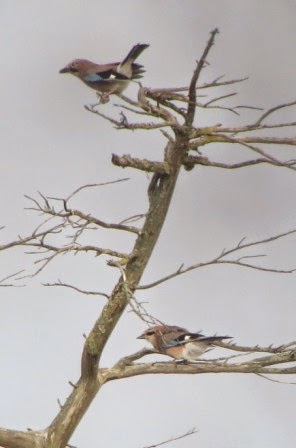 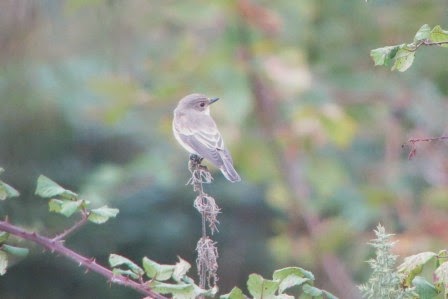 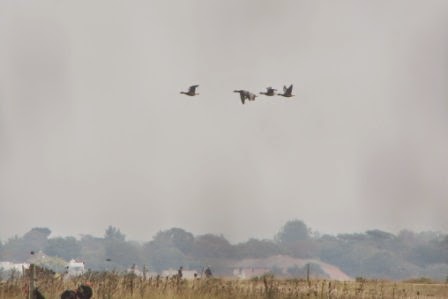 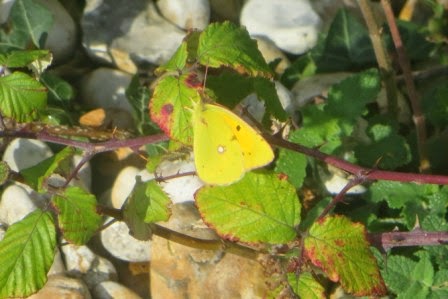 This evening there was 1 Wheatear, 2 Stonechat on the Severals  (and 1 on waste ground by the Ocean Air factory in Selsey), 20+ Chiffchaff, 10+ Yellow Wagtail going into roost on the roosting first Several, 30+ Meadow Pipit, 300+ Swallow, 300+ House Martin plus many more hirundines too high up to identify, and 30+ Mediterranean Gulls offshore. (S&SaH)


Tuesday, 23rd September: Another fairly still day, a bit misty and murky at times but mainly sunny and pleasant after a cold start. Virtually no wind at first, gradually picking up to gentle breeze W/SW 2-3 by early afternoon - the first from that direction in quite some while.

Ferry Pool: A bit of variety this morning, including a Little Stint, a Common Sandpiper and a total of 9 Avocets, plus the usual Snipe and Green Sandpiper and 10 Black-tailed Godwits (AH). 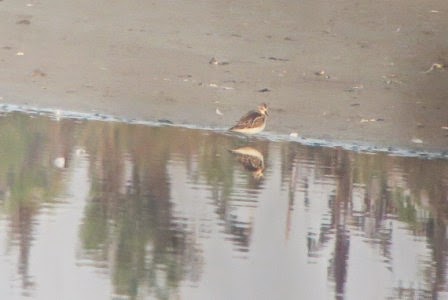 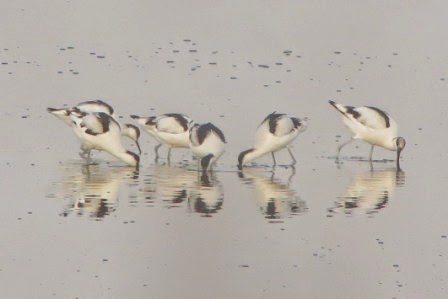 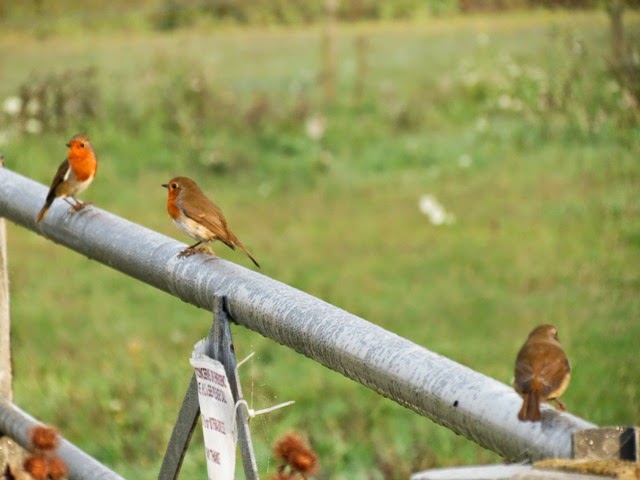 Robin-fest at the North Fields (JDW)


North Wall area: Sadly no sign of the Wryneck up to late morning along the North Wall, despite plenty of lookers. There were, though, quite a few migrants, including 2 Whinchats, a Wheatear, several Reed Warblers and Chiffchaffs and a dozen or more Blackcaps, plus a steady flow of Swallows and the odd Meadow Pipit over. On the Breach Pool there were a pair of Knot in with the 30+ Black-tailed Godwit, and at least 3 Snipe in the edges of the reeds (AH). Around the fields I encountered another 7 Blackcaps and 3 Common Whitethroat. Robins are everywhere; 3 were sitting on the same gate together which showed an uncommon tolerance for this species (JDW). 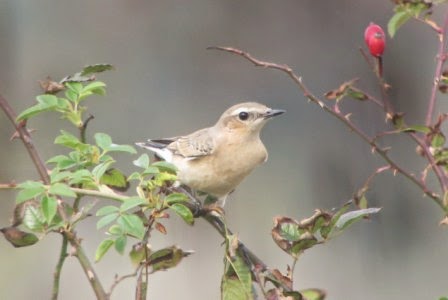 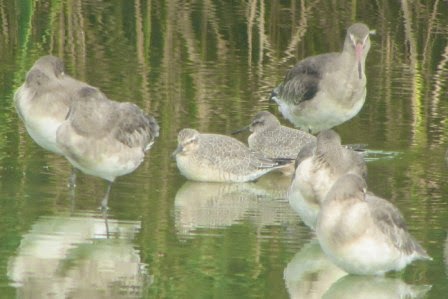 Along White's Creek and into the harbour there were plenty of waders on the rising tide, including 7 Curlew Sandpipers, a juvenile Sanderling, 5 Greenshank, 2 Spotted Redshank, 30 or so Golden Plovers and 50+ Lapwing. Also there were a couple of Kingfishers, 5 Yellow-legged Gulls, 18 Brent Geese and 100+ Wigeon about. (AH/JW/BFF/DIS/TG et al) 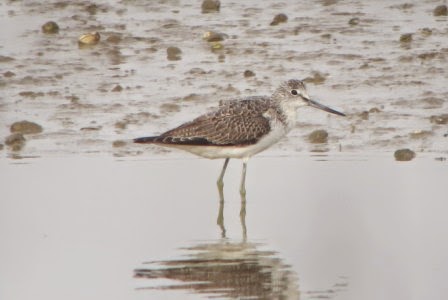 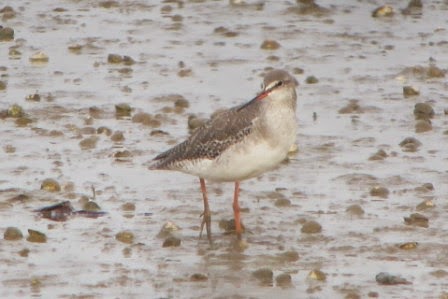 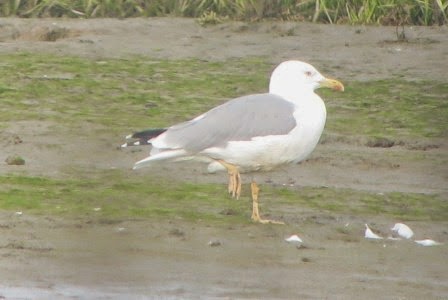 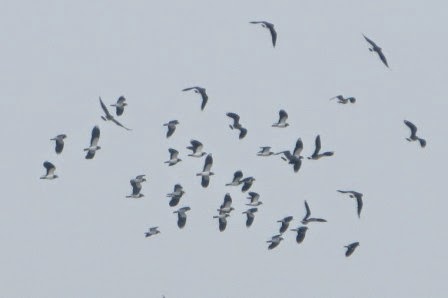 Selsey Bill (0810-0950hrs): Bright and sunny with some high cloud. Calm. (Obs: OM/GH)
I arrived to a flat calm sea and sunny morning at the Bill, where GH was already in place dutifully counting the overhead viz mig* (*someone is bound to ask = visible migration). It was obviously not going to be a sea-watching day although just a few Brent and Sandwich Terns appeared, so it was a matter of checking the gardens and area for migrants. The most obvious birds were Chiffchaffs, plus the first Stonechat of the autumn here. My log...
Brent Goose - 1E, 8W
Common Scoter - 5E, settled os
Sandwich Tern - 6E, 2W
Grey Wagtail - 2E
Stonechat - 1 Gardens
Wheatear - 1 ob
Chiffchaff - 17 gardens
(Meadow Pipits/Skylarks/hirundines also moving E though no count from me! OM)
Selsey area: A check of the  Northcommon Farm / Warner Lane areas was not overly productive, combined totals being 2 Skylarks E, 20+ Meadow Pipits, 5 Blackcaps, 2 Whitethroats, 12 Chiffchaffs, 4 Goldcrests and 2 Great Spotted Woodpeckers (OM).

Brent Geese moving west, and Stonechat in the gardens at the Bill (OM) 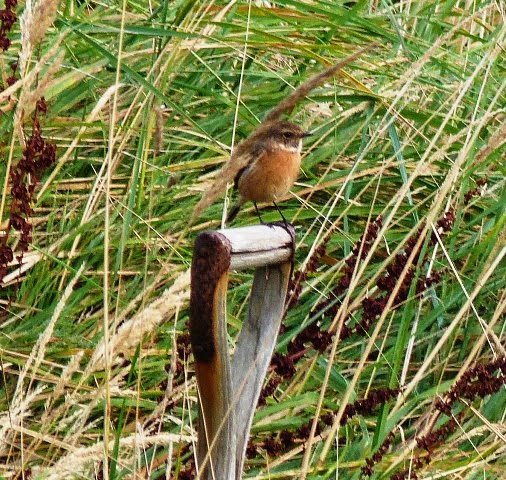 Medmerry: Breach - Viewpoint: A midday visit at high tide, with the waders roosting. Totals were 1 Little Stint, 14 Dunlin, 1 Bar-tailed Godwit, 8 Ringed Plovers and 1 Common Sandpiper. At least 20 Med Gulls and 6 Sandwich Terns were loafing on the islands, a flock of 5 Brent Geese flew W and a Kingfisher appeared, perching up for a short while (OM/BFF/DIS et al).

Monday, 22nd September: A bright and lovely early autumn morning.... but decidedly chilly at first after a clear night, with a subtle shift in the wind to N or NNW.


North Wall area: A Wryneck along the lower path (just north of Breach Pool) was the highlight (JDW). UPDATE: Still present mid-afternoon, showing well on and off.
White's Creek was alive with waders again this morning after seemingly being devoid of them a few days ago... including at least 4 Curlew Sandpipers, 6+ Spotted Redshanks, 10 Greenshank, 24 Golden Plover, 20 Grey Plover and 50 Black-tailed Godwits amongst the many Redshanks and Wigeon and 6 Brent  Geese. Additionally there were 2 Kingfishers, 2 Grey Wagtails, 64 Great Black-backed Gulls, 1 Lesser Black-backed and 1 Yellow-legged Gull, 18 Chiffchaffs, 3 Blackcaps, 2 Cetti's Warblers and a steady stream of hirundines, mostly Swallows, moving east (OM).
On the Breach Pool a Water Rail showed and a second bird called; also 67 Black-tailed Godwits and 6 Common Snipe there. In the field at the back of Owl Copse were around 80 Meadow Pipits with 3 Yellow Wagtails amongst them. Macracarpa Copse, true to form, was quiet with 3 Chiffchaffs together with 2 Buzzards and a Great Spotted Woodpecker. At 1130 there were some 300 Swallows over the Harbour. (JDW/OM) 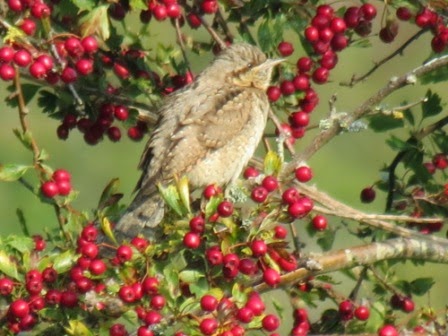 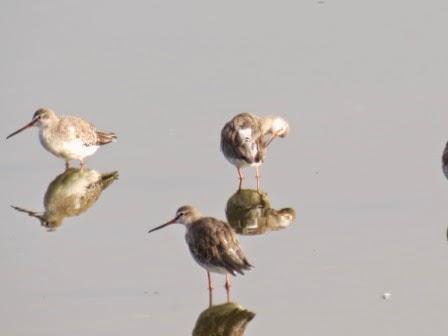 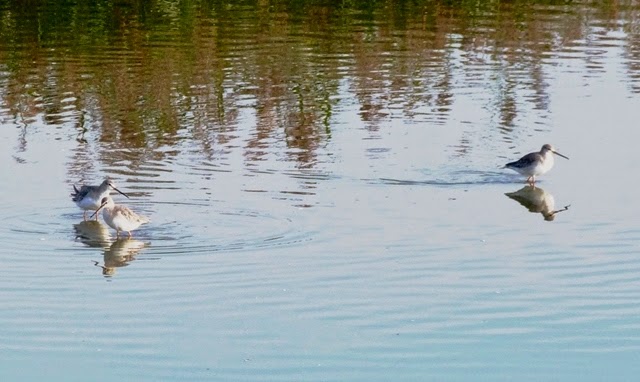 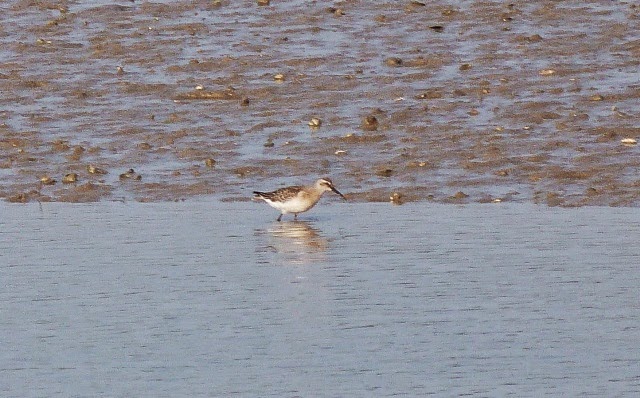 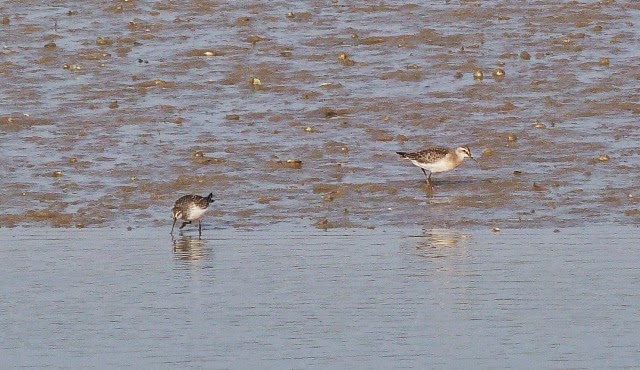 (Below) Further images of the Wryneck, and the Kingfisher at White's Creek (TG). 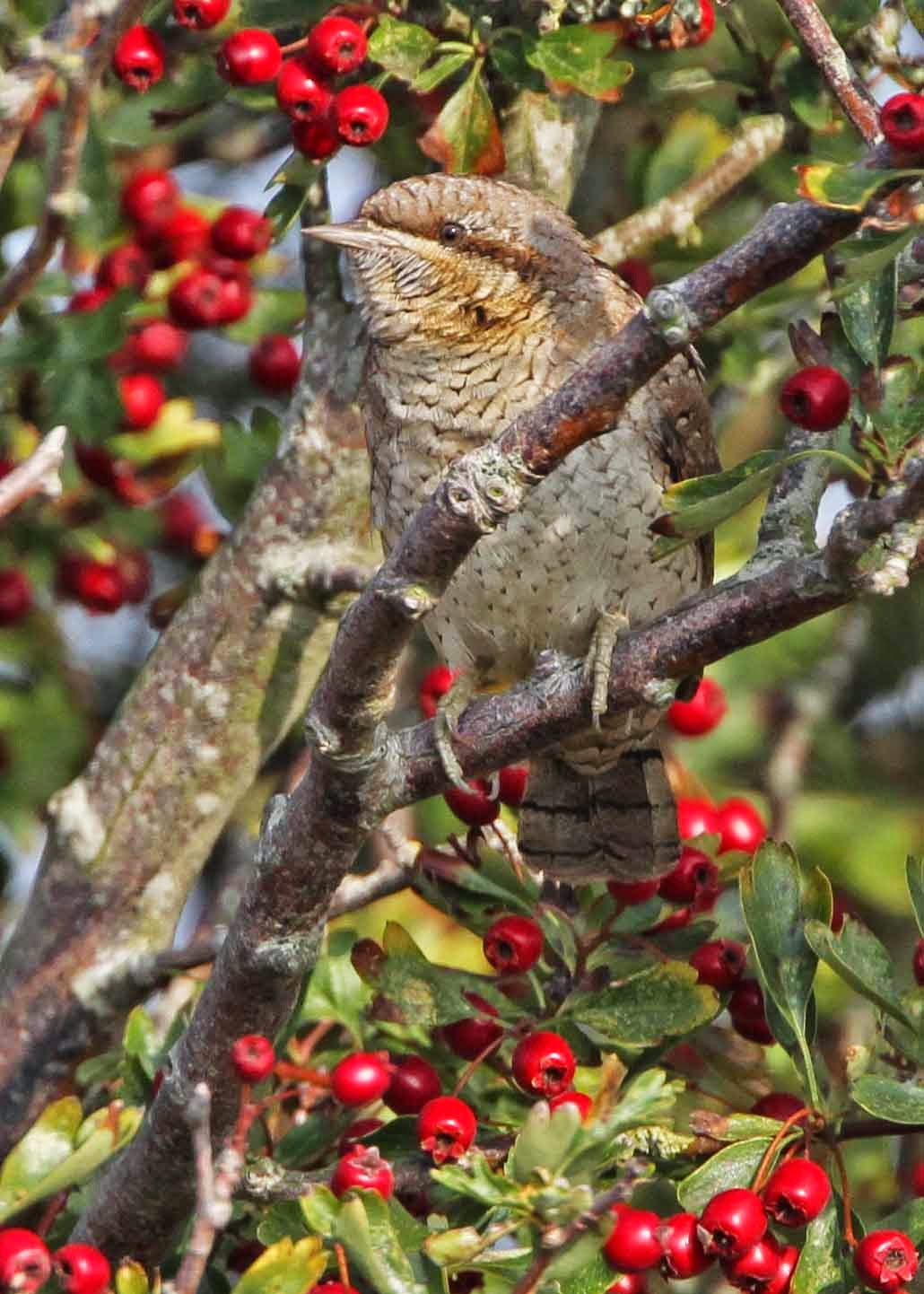 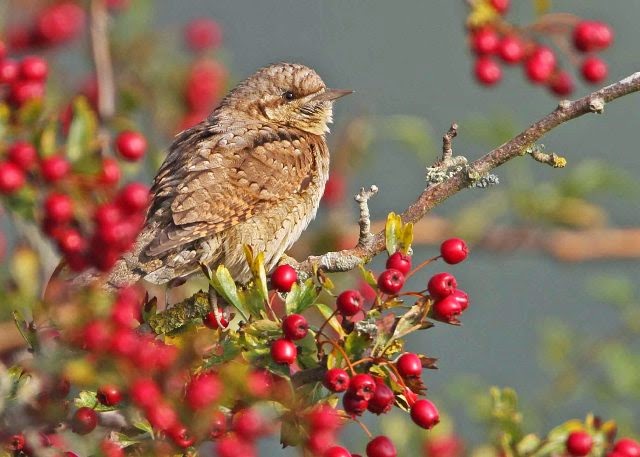 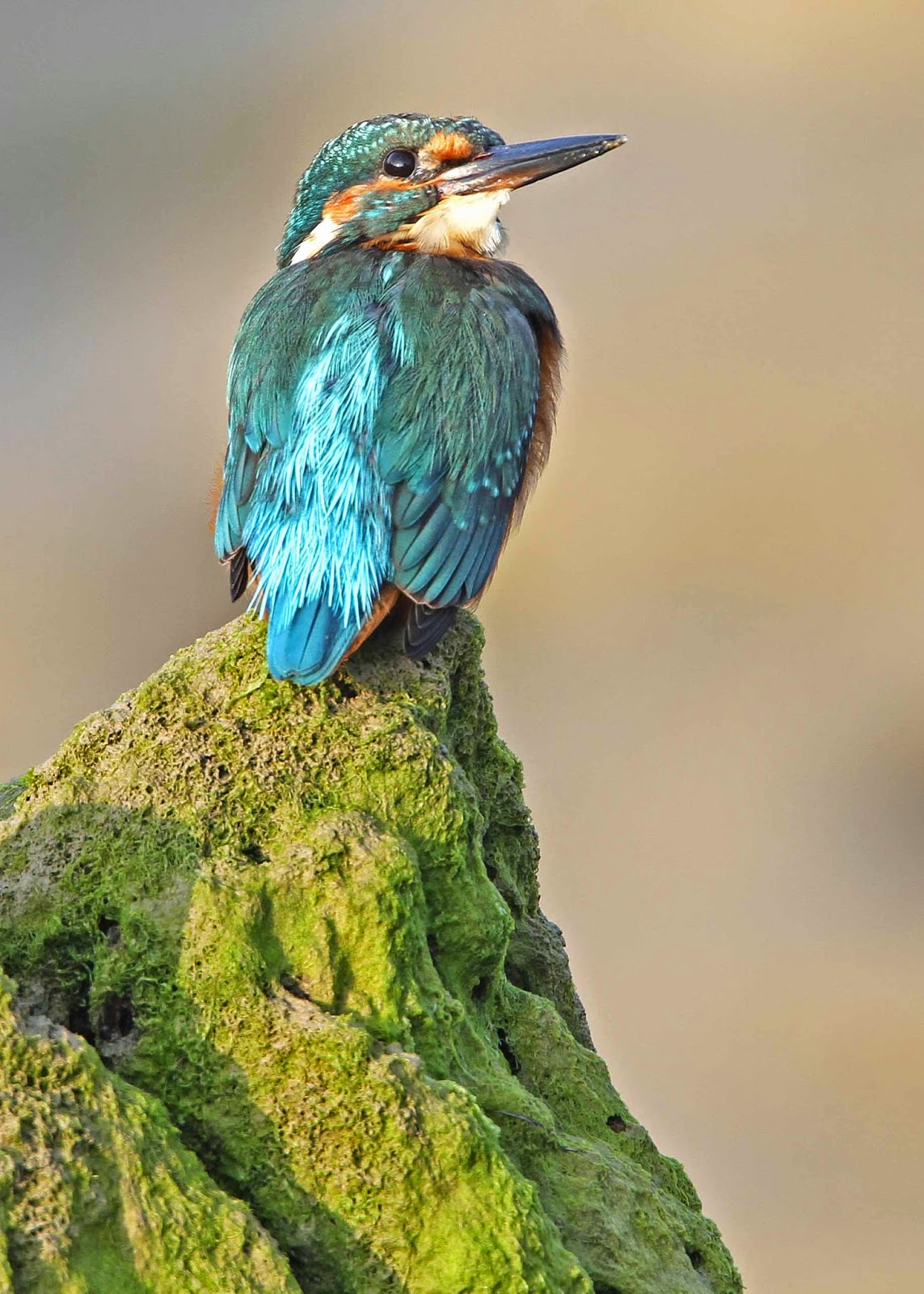 East Beach Pond, Selsey: Habitat-wise it was looking very good (see pic), but the only migrants I could turn up were Chiffchaffs, at least 9 of them amongst the willows. Nearby on the green were 3 Wheatears, 26 Swallows heading east, and 37 Turnstones on the beach. (SR) 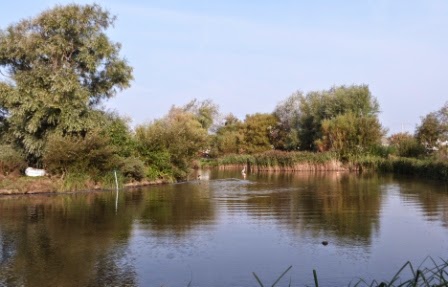 Ferry Pool: Same as usual - a Green Sandpiper, a Common Sandpiper, a Snipe, 4 Avocets and a few Black-tailed Godwits, Lapwings and Teal. (AH/CRJ)

Ferry Channel/Long Pool: Along Ferry Channel there were 1 Kingfisher..14 Dunlin..1 Little Stint..1 Whimbrel (CRJ).
Around the Long Pool there were 2 Cettis Warbler.. 1 Reed Warbler.. 1 Whitethroat.. 10 Blackcap.. 20 Chiffchaff.. 10 Meadow Pipit.. 3 Stonechat.. 8 Reed Bunting.. 2 Yellowhammer.. 5 Greenfinch.. 2 Chaffinch.. 2 Buzzard.. 4 Grey Partridge with a further 8 Avocets in the Harbour (CRJ).
This evening a Spotted Redshank was in Ferry Channel, and along the Long Pool approximately 20 Blackcaps, 10 Chiffchaffs and 10 Reed Warblers amongst a big roving mixed flock looking to go to roost in the reeds or bushes. (AH) 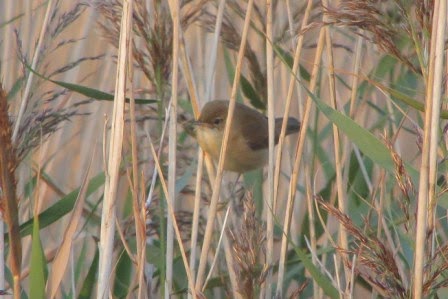 Church Norton: A few birds around, including a couple of Wheatears on the beach, a Spotted Flycatcher, a dozen Blackcaps and a few Chiffchaffs in the churchyard area, 200+ Swallows with 4 Sand Martins, 20+ Meadow Pipits, 2 Grey Wagtails and 6 Pied Wagtails all going east, a couple of Whitethroats on the Severals and a Whimbrel and 8 Brent Geese in the harbour. (AH/CRJ)
Highlights this evening included 5 Wheatears at Park Farm, 3 Stonechats in the horse field, a Water Rail flying low over the first Several before dropping into the reed beds, a Greenshank and 10 Mediterranean gulls. (S&SaH)
Posted by Andrew House at 12:13