Christmas Day, Friday 25th December: First of all, we would like to wish all our readers and contributors a very happy Christmas.
However the weather is anything but seasonal, mild and blustery and drizzly again...... 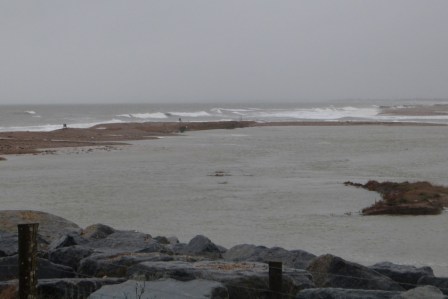 The Breach at high tide (SR) 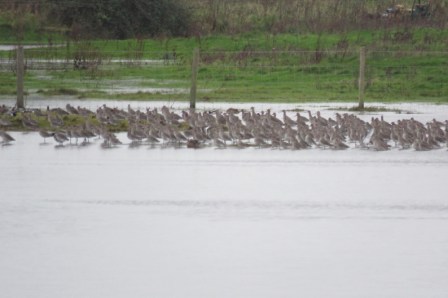 Black-tailed Godwits (above), Brent Geese, Gadwall and Wigeon and Wigeon, Shoveler and Curlew on the Ferry (AH) 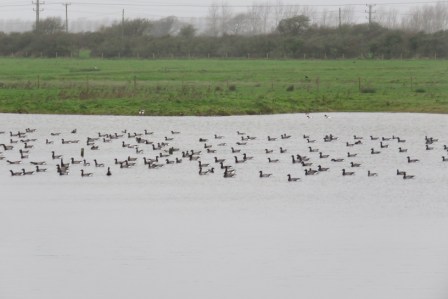 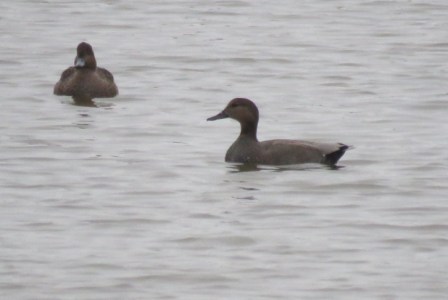 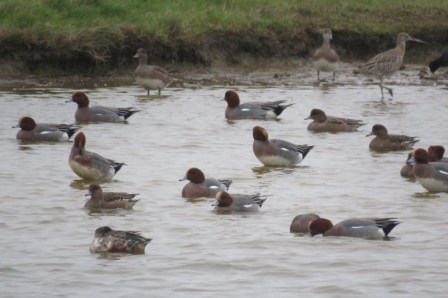 Long Pool to Church Norton: Again nothing unusual, but a lot of birds moving about on the high tide - including 22 Avocet and 20+ Snipe at the end of Ferry Channel, numerous Redshank, Curlrew, Grey Plover and Dunlin, at least 500 Brent Geese, 1000 Lapwing and 80 Golden Plover up over the North Wall and many Wgeon, Teal and Shelduck. Along the west side there were a few Meadow Pipits and half a dozen Stock Doves, whilst at Norton there were a Chiffchaff and a couple of Goldcrests. (AH)
Late this morning there was a Grey Wagtail at Park Farm, Selsey, 12 Red-breasted Mergansers offshore/in the harbour and a Jay was in the first Several. (S&SaH) 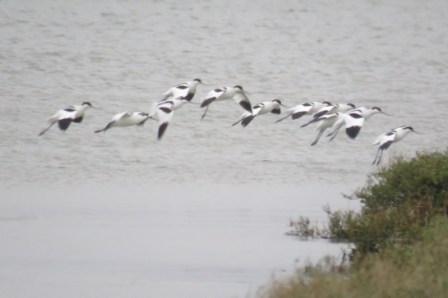 Avocets (above) Curlew and Snipe from the Long Pool (AH) 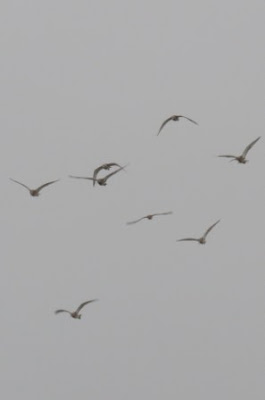 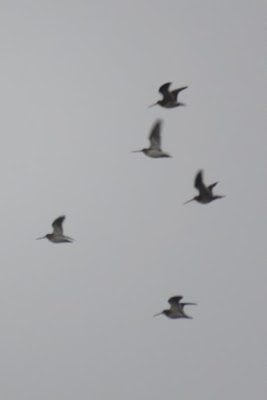 Thursday, 24th December: As expected, a return to the blustery, cloudy and changeable but mild conditions, with periods of rain and a strong to gale force south-westerly....

Ferry Pool: (8.30am) The water level was very high;  nothing out of the ordinary but the sheer numbers of birds and their constant activity was impressive.  A minimum of 150 Brent Geese were on the water with small flocks flying in to join them at regular intervals; also c250 Wigeon, c100 Teal and the same of Shoveler, 12 Canada Geese, c150 Lapwing, with others flying in, and a large flock of c100 Black-tailed Godwits at the back of the pool, plus a Tufted Duck, a Snipe and a Kingfisher that dashed across the pool. (SR)
Not much to add later on, though six Golden Plovers flew over and back, but didn't settle. (AH) 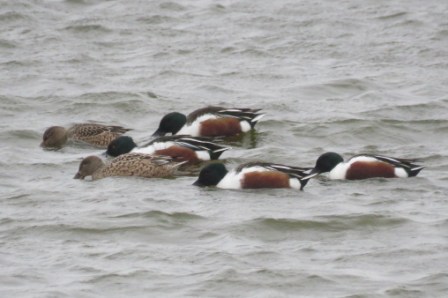 Shovelers (above) & Shelduck on the Ferry (AH) 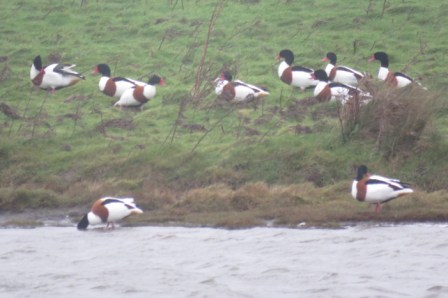 Birdham Pool: The two pairs of Mandarin were under their usual trees this morning, with possibly a third female present as well. (SH/BI) Also a surprise drake Red-crested Pochard present later, consorting with the dozen Tufted Ducks. Also a few Little Grebes & Cormorants, a Kingfisher, a Great Black-backed Gull and a few Black-headed Gulls.
At Saltern's Way, two Little Gulls again, but no sign of the Black Brant with the Brent Geese.(BI) 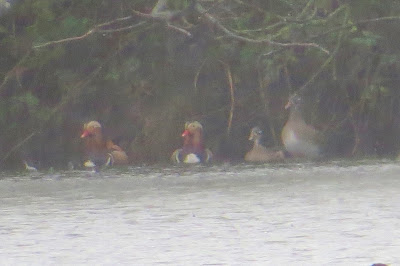 Mandarins in the gloom (top two) and Red-crested Pochard at Birdham Pool, and Little Gull off Salterns Way (BI) 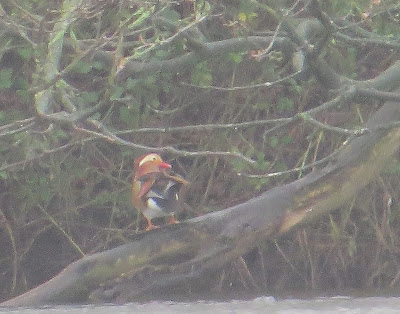 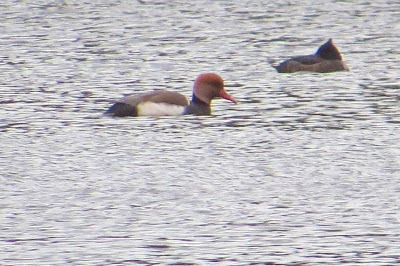 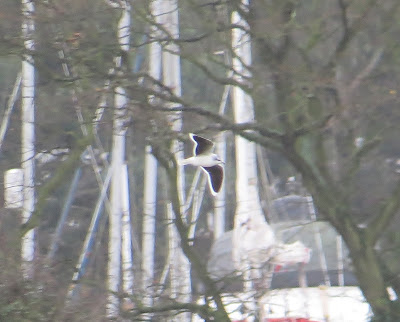 Apuldram: fifty Yellowhammers and two Stonechats around the dung heap.(BI) 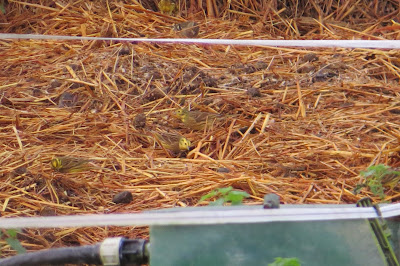 Yellowhammers at Apuldram dung-heap (BI)
Church Norton: Nothing much out of the ordinary in the dire conditions and with a big tide, though there were a couple of Mediterranean Gulls offshore, a few Turnstone and 40 Greenfinch on the beach, and plenty of Grey Plover, Knot, Dunlin, Redshank and Curlew getting moved about the harbour by the rising water. (AH) 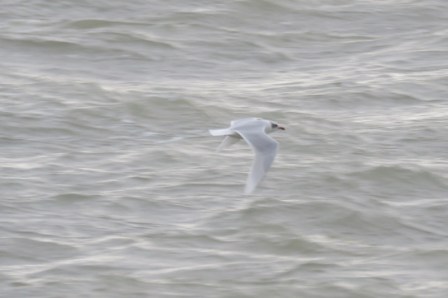 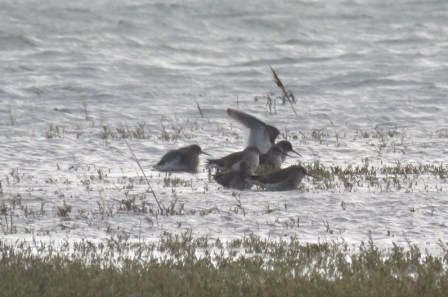 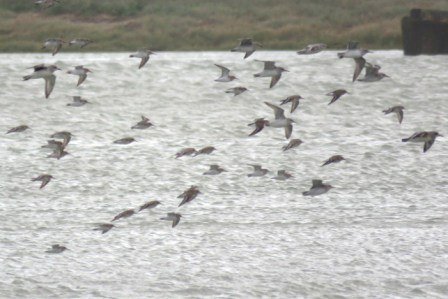 Wednesday, 23rd December: At last a bit of welcome sunshine, with drier conditions and a clear bright morning sky, though gradually becoming cloudier as the day progressed. Still generally mild, despite a fresh to strong WSW wind, but this brief respite is not set to last as a return to changeable weather with rain and strong winds is due by tomorrow and through the Christmas period..... not exactly what we all asked Santa for!

At the Bill this morning: Early morning sun and clear skies - with so little of this on offer recently it was worth recording! Below - Mediterranean Gull and Black-headed Gulls feeding over a rough sea (OM) 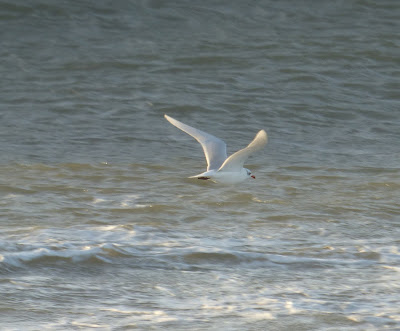 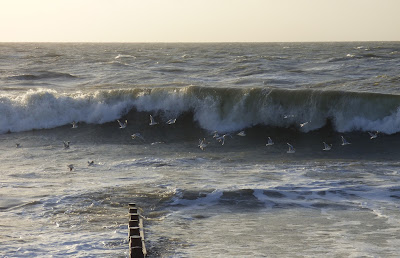 Selsey (West): Warner Lane/Crablands - On the flooded fields there were 23 Snipe and 62 Curlew plus 2 Stonechats (OM). 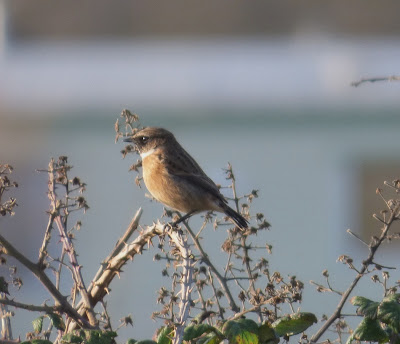 Stonechat and flock of Curlew at Warner Lane/Crablands (OM) 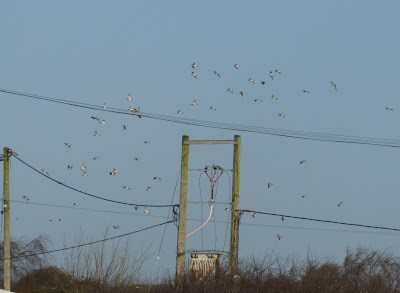 North Wall: Watched a tremendous Peregrine hunt at 08.25 this morning. I was watching from the tramway next to the Ferry channel and 2 (possibly 3) Peregrines were hunting the waders over White’s creek/Pagham side, repeatedly stooping as the waders headed for safety of the Breech pool or cleared out across the harbour. Anyone on the North Wall would have had a spectacular view of the action, which went on for 5 minutes or so. Needless to say, a few flocks of waders (mostly Godwits) headed over my head onto the Ferry pool whilst the Peregrines were in the air, though I didn’t see a kill. (PH)

Ferry Pool: There were 100+ Black-tailed Godwits, 50+ Curlew and about 400 Lapwing on the field today, along with 40 Canada Geese and 200 Wigeon, with the usual numbers of Shoveler and Teal, plus 25 Shelduck on the Pool. (AH) 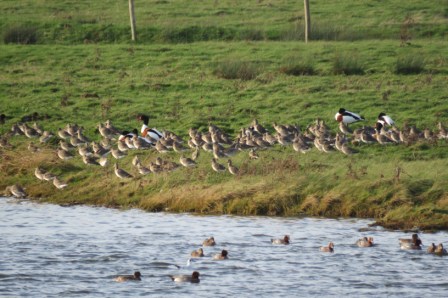 Black-tailed Godwits, Curlews, Shelduck and Wigeon on the Ferry (AH)

Long Pool: A Spotted Redshank was in the channel this morning, along with 22 Avocets and 12 Snipe, but the Long Pool itself was completely birdless. (AH).﻿ 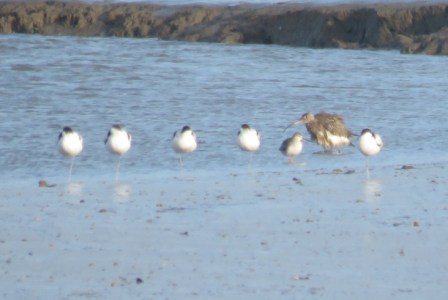 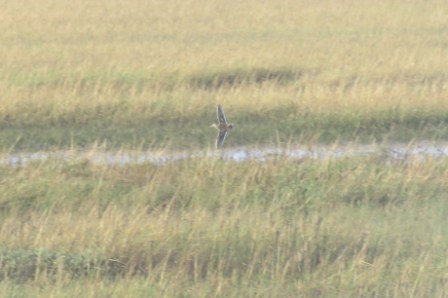 Chichester GPs: Not much to report around the Ivy Lake complex today - a few Pochard and Gadwall and 30 or so Shovelers on New Lake with 50 or so Tufted Duck, whilst on Runcton Lake there was not much other than 100 or so Coots. There were 32 Greylag Geese on Copse Lake and just a few Pochard and Tufted Duck on Ivy Lake. (AH) 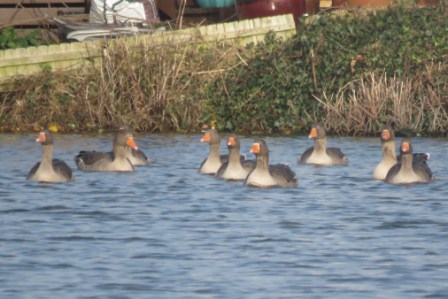