Sunday, 6th December: Cloudy and dull again, with a strong SW wind gusting to near gale-force and rain at times, though still mild for the time of year....

Selsey Bill: A Grey Phalarope was among the gulls off Hillfield Road from 10.15 to around 11.30am, when it flew off east and has not been relocated since. Apologies to any I couldn't contact, but Vodafone seem to have given up providing a network on the peninsula today (to me at least!). (AH/SR/RJS)
Earlier at the Bill there were still a few Kittiwakes, Gannets and auks going west, plus two Great Northern Divers and the first winter Eider offshore. (Full log below) (JA/SH/IP/SR/RJS)
(0730-0930hrs)
Great Northern Diver - 2os
Red-throated Diver - 1W
Great Crested Grebe - 1E, 1W
Gannet 15w
Brent Goose - 2W
Common Scoter - 5W, 1os
Eider - 1os
Red-breasted Merganser - 2E, 2W, 3os
Common gull - 2W
Mediterranean Gull - 2os
Kittiwake - 44W
Razorbill - 1W
Guillemot - 1W
Scoter 5w 1os
auk sp - 4W 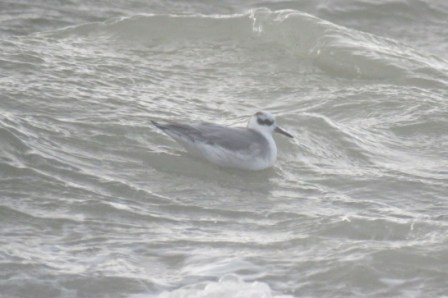 Grey Phalarope off the Bill (AH) 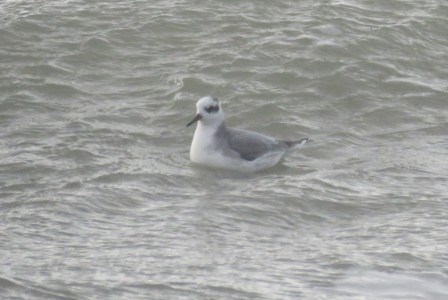 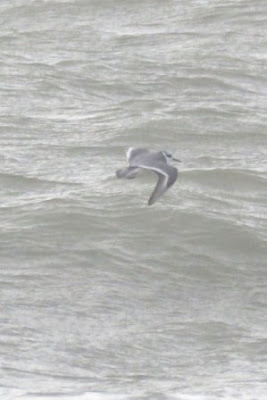 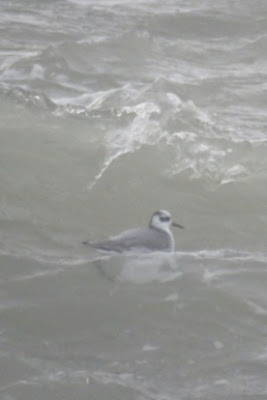 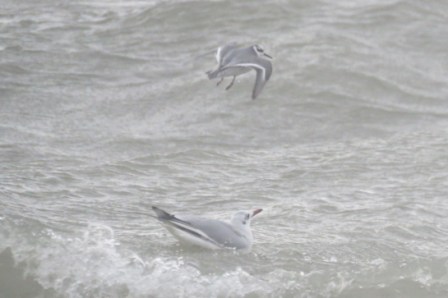 Selsey: East Beach Pond - Two Chiffchaffs were  around the pond, but no sign of the Grey Phalarope offshore in a search from the end of Church Norton round to the Lifeboat Station and the Bill late morning. (SH/SR)

Church Norton: A Great Northern Diver was inside the harbour and a long  way down the main channel this morning when the tide was falling. (RJS)
Otherwise, a Grey Wagtail was at ParkFarm and there were three Goldeneye, six Red-breasted Mergansers, three Little and two Great Crested Grebes in the harbour, a few Skylarks on the spit, and plenty of waders, including 200 Knot and 20 Black-tailed Godwits on the mud as the tide fell. (S&SaH/AH) 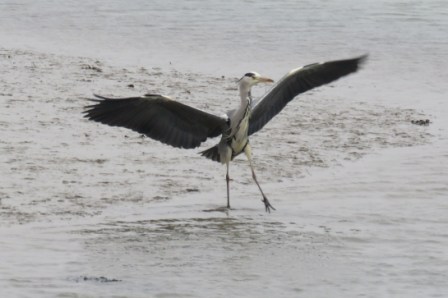 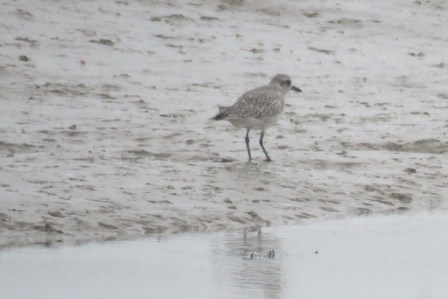 Pagham Lagoon/Spit: A Goldeneye was on Pagham Lagoon with twenty Tufted Ducks, Great Crested Grebe and ten Little Grebes. The dark mystery gull was also present. On the little lagoon, there were four more Goldeneye and a few Teal. In the harbour there were Ringed Plover, Grey Plover, three more Goldeneye, plenty of Wigeon and a few Pintail. (BI) 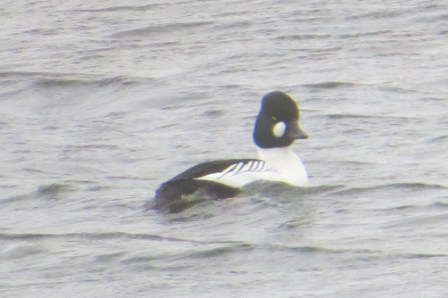 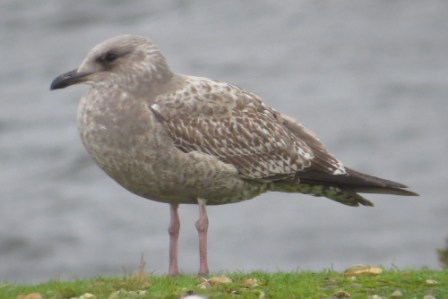 North Wall: On the Breech Pool there were two Black-tailed Godwits, plus a few Mallard and Teal, whilst a Goldcrest and a flock of Long-tailed Tits were by the car parking in church lane. (BI)

Ferry Pool: There were 12 Avocets on the pool late this morning, along with 6 Mediterranean Gulls, 36 Shelduck, c60 Shoveler and c40 Teal, but just a few dozen Lapwing. (AH) 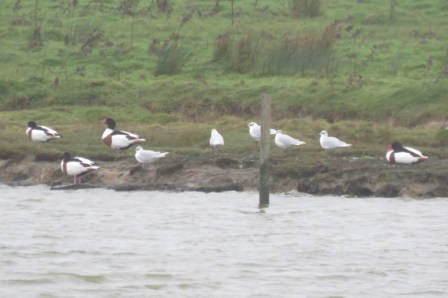 Mediterranean Gulls and Shelducks on the Ferry (AH)


Saturday, 5th December: As expected it was back to unsettled conditions again; dull and cloudy, with strong to gale force SW winds, though mainly dry today....

Church Norton: In the blustery conditions there were 59 Knot, 300 Dunlin and 3 Red-breasted Mergansers. (CRJ)
West Wittering: East Head-Snowhill: Eight brave SOS members and their barmy outing leader assembled in the car park at East Head this morning in what can only be described as dreadful conditions, with the wind howling from the south-south west it was difficult to stand up and the sea was a boiling maelstrom! The only place it was possible to venture was inside the dunes were the wind was a little less strong. We found a few Meadow Pipits, Skylarks and Reed Buntings seeking shelter in the vegetation, then walking through we flushed a Short eared Owl, which soon dropped down into cover. On the northern end of the Head we managed to seek a little respite; feeding along the tide wrack was a decent flock of 20+ Greenfinches, mainly all males. Scoping the rough sea we found a few  Red-breasted Mergansers and Great Crested Grebes just offshore with a single Common Seal. Surprisingly a Sandwich Tern then flew past battling the gale! On the mud flats off Ellanore were stacks of feeding Dunlin with a few Grey Plover and Brent Geese. The walk back was real punishment with sand blowing everywhere, even inside your ears! Early lunch was taken and afterwards we walked to Snowhill Marsh where we found plenty of Teal and Wigeon plus a  few Redshank and Black-tailed Godwits, then nearby we found 2 Common Snipe and a single Jack Snipe and had brief views of a skulking Water Rail. On the greensward perhaps 1500 Brent Geese were grazing in several flocks, but the wind made it nigh on impossible to carefully scrutinise them. We returned around 1330hrs earlier than normal, and despite the horrible conditions had still managed to find a few good birds. If you don't go out you won't see anything was our motto, plus it got one or two of us out of Xmas shopping! (BFF et al)


Friday, 4th December: Heavy overnight rain giving way to a sparkling winter's morning; cool, bright and sunny with clear skies and a fresh WSW wind force 4-5 along the coast. Sadly it's not set to last though, with more wind, rain and gales predicted for the coming week-end....

Medmerry: Easton Lane to the Stilt Pool - Fairly quiet in the brisk wind, though there were plenty of small birds along the banks and hedges. There were up to 40 Yellowhammers in various groups, maybe half that of Reed Bunting and Linnet, with 50+ Meadow Pipits and Pied Wagtails spread around the area, along with three pairs of Stonechats. A Green Sandpiper opposite Marsh Barn and a Black-tailed Godwit and 20 Lapwing on the Stilt Pool were the only waders seen, though there were plenty of Wigeon and Teal, plus half a dozen Gadwall and a few Tufted Ducks scattered about. (AH) 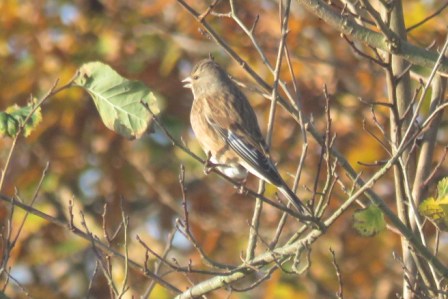 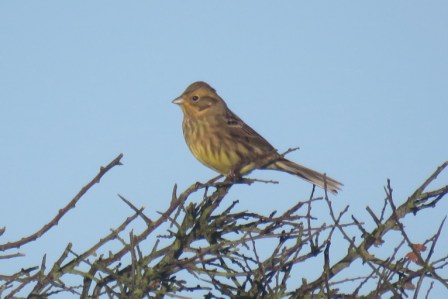 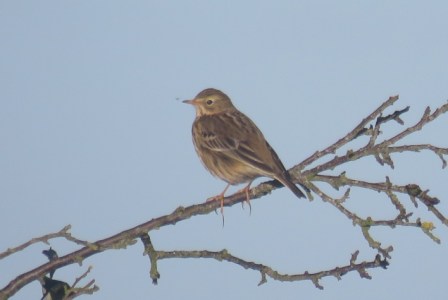 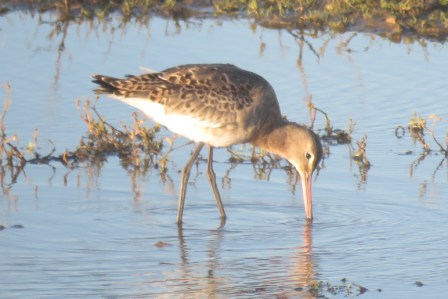 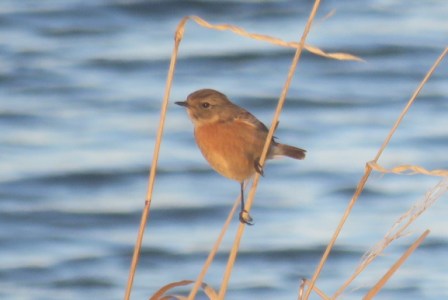 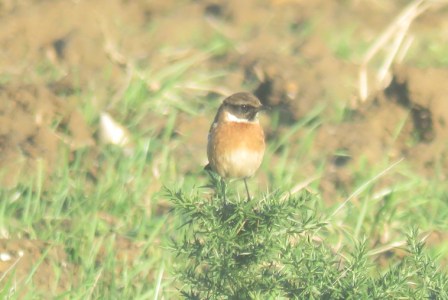 Ferry Pool: Just an Avocet on the pool, though there were several hundred Lapwing on the field,  200+ Wigeon, 100+ Teal, 40+ Shoveler and 35 Shelduck around the edges, and around 30 Brent Geese dropped onto the field. (AH)

Church Norton: A Swift sp was reported late afternoon....."unlikely to say the least, but today I twice saw at c.16.00hrs, for a few seconds each time, a Swift (presumed Common) quite low over car park at Church Norton.  Scimitar winged, all dark, no time to use binoculars; unnecessary anyway. Definitely not a Swallow, Martin or bat.  Record can be verified by my (non-birdwatching) partner!" (per Simon Allday)

North Wall: A very mild but bright morning along the Wall; 44 Black-tailed Godwits and a Snipe on the Breech Pool along with a Water Rail and a few Mallard and Teal. In the field behind the Pool were 70 Curlew and 50 Wigeon. A Cetti's Warbler was calling at the western end of the Pool. In Honer field were 1400 Brent Geese, 120 Black-tailed Godwits and 36 Curlew, whilst on Bremere Rife were 16 Canada Geese and a Greylag. (JDW)

Chichester marina: I had a look for the two Black Brants but unfortunately the birdscarers kept putting the flock up so no luck. In the channel, there were eight Red-breasted Mergansers, two Goldeneye, ten Little Grebes and a similar number of Great Crested Grebes. Waders included Dunlin, Redshanks, Curlews and Grey Plovers. (BI)
Posted by Birderowen at 08:52