Wednesday, 26th June:  My last report for a week; once again Andy will be running the blog in my absence so all reports to him please. Only news so far is that the female Scaup is still present on Pagham Lagoon with it's drake Tufted chum! (CRJ).

PENINSULA: AH reports" I went back for another look and to get a better photo of the Scaup on Pagham Lagoon this morning. It may not be a hybrid, but it certainly looks like it is planning future generations with one of the Tufties! Not much else to report - usual suspects on the Ferry Pool; 1 Green Sandpiper, 18 Avocets, 25 Black-tailed Godwits & 40+ Redshank." 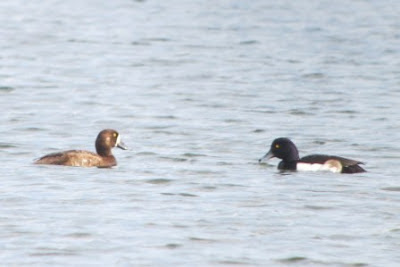 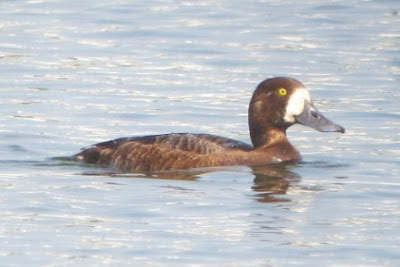 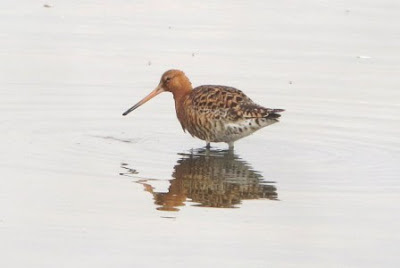 
SR reports " took a pleasant walk along the North Wall and surrounding fields this morning.  Very little of note in the harbour, some Lapwings, Shelduck, Little Egrets, Redshank but it was generally quiet as one would expect for June.  Warblers were very much in evidence and a pleasure to watch and listen to.  One Sedge Warbler (see photo) remained in the same hawthorn bush singing away for a good 20 minutes, totally unconcerned by my presence, I had good views of 3 but many more were singing.  Reed Warblers were still singing too, I spotted 8 of these and also heard a quick burst of Cetti's Warbler but couldn't locate the bird.  Also seen Jay, Linnet feeding young, 4 Reed Buntings, 8 Swifts, 1 House Martin, 5 Whitethroats, 2 Skylarks. Breech Pool - Shelduck with her 4 ducklings, Mute Swans with their 4 cygnets, 4 Tufted Ducks, 2 Swallows, 1 Redshank, Reed Bunting, Common Tern." 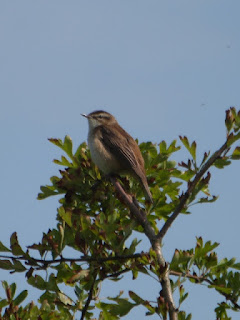 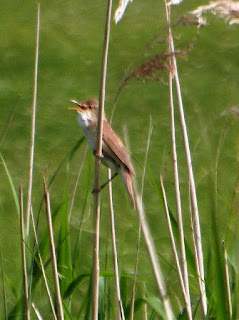 Church Norton: Lazily watching from the bench as the tide slowly came in we enjoyed a great deal of tern activity, with at least three pairs of Little Terns, and perhaps 12 pairs of Common Terns possibly breeding on the main island and 40 Sandwich Terns feeding around the island. Fifty-nine Med Gulls around the island - mainly adults with nine 2nd year birds. Six Grey Plover plus few pairs of Ringed Plover, plenty of Oystercatchers and a single Brent Goose. (Bernie Forbes, Dave Smith & Dorian Mason).