Sunday, 9th June: Dry again but the nagging north-easterly force 4-5 persists.
Apologies in advance as this is my first attempt at stepping into Mr Mitchell's shoes.......

PENINSULA: At Medmerry this morning, a total of 11 Avocets, 1 Bar-tailed Godwit, 1 Sanderling, 1 Redshank & 6 Ringed Plovers on the diggings. Nearby a singing Corn Bunting, half a dozen singing Skylarks & Meadow Pipits and a distant Cuckoo.
On the RSPB reserve 3 or 4 pairs of Lapwing, 20 Shelduck and 4 Gadwall, and along the beach 3 Dunlin with a flighty flock of about 20 Sanderling.
At the Ferry there was another Avocet and 10 Black-tailed Godwit. (AH)

7 of the 11 Avocets present on Medmerry site (AH) 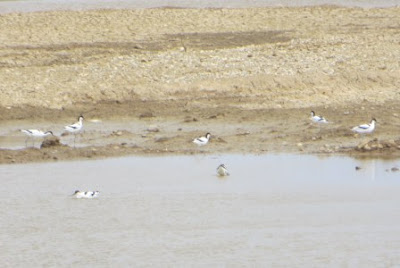 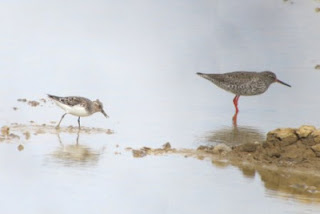 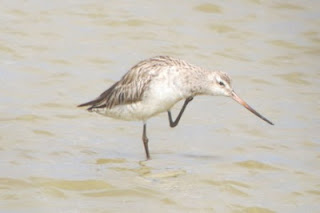 Saturday, 8th June: Another bright, sunny and dry day with an annoyingly brisk NE wind, force 4-5. I headed to the Bill first thing, where I was in for an unpleasant surprise; an encampment of (gypsy-type) travellers had set up their caravans, vans and cars all over the Oval field! Now I wouldn't like to disrespect their human rights so I best be careful what I say, but doubtless we can look forward to a (hopefully short) period of inconvenience and disturbance to wildlife et al, quite probably with a good deal of rubbish to be cleared at public expense in due course. And I do base that on previous experience. No other comment, but be careful in the area....
Right, moving on to birding news, as anticipated it was slow going at the Bill this morning. and I only stayed for two hours. The only slightly unusual thing was a gathering of 100+ gulls along the shoreline. Most were immature Herring Gulls with a couple of Black-headed Gulls and two Great Black-backed Gulls amongst them, and one of the latter, a sub-adult, was a ringed bird. It bore a metal ring on its right leg and a blue plastic ring on its left, bearing a number in pinkish/red lettering which I read as 33D (doesn't show up that well in the photos). I fired off a few quick record shots before the inevitable posse of dog-walkers appeared to drive away all the gulls. One of the Herring Gulls that settled quite distantly also appeared to have a red marker/flag on its left leg - at least that's what I think it is - but I'm not totally sure and didn't notice any numbering on it. (OM) 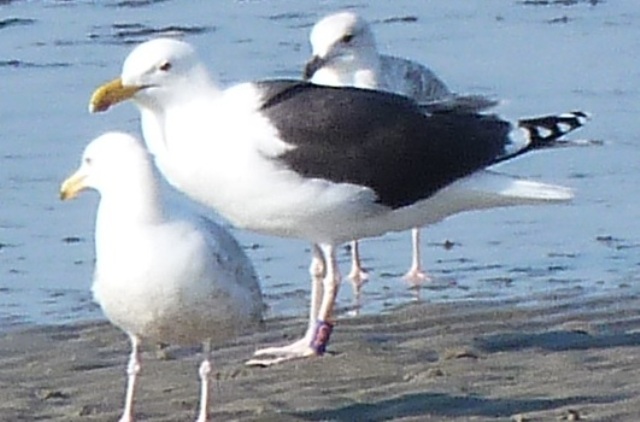 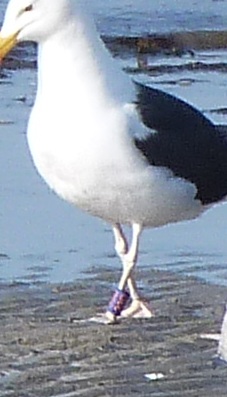 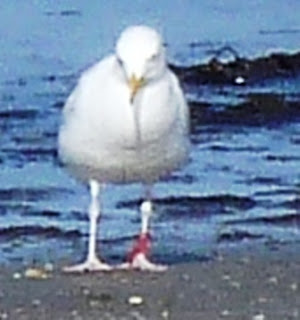 Friday, 7th June: Hi to all readers and users of this blogsite, which I hope you have found useful, and judging by the number of daily page views, the site does seem to be serving its purpose so far. I have tried to keep the information as current as possible, but with evening and holiday commitments looming at this time of year it was apparent there could well be gaps or delays in getting the news out. I've therefore been looking for someone to help out on such occasions and I'm pleased to announce that Andy House has agreed to step up to the mark. As a regular contributor I'm sure he'll be an asset, so please be patient if things go a little astray for a short while but I'm sure Andy will soon be putting my efforts to shame and it will be business as usual.
OK, news for today shown below:-
At Selsey Bill this morning sunny bright conditions with a brisk NE wind, but generally quiet; AH reports c. 80 Sandwich and 50 Common Terns still feeding & flirting along the beach and a couple of Gannets offshore. GH had a flock of 15 Common Scoter E. 4 Kittiwakes and 3 Fulmars but little else, apart from the spectacle of some amazing forked lightning over the sea. 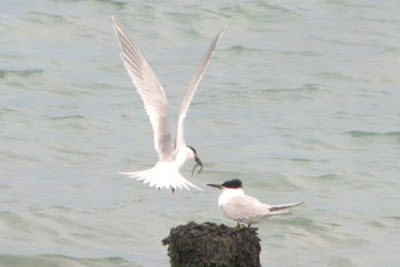 Pairs of Sandwich (above) and Common Terns at the Bill (photos: Andy House) 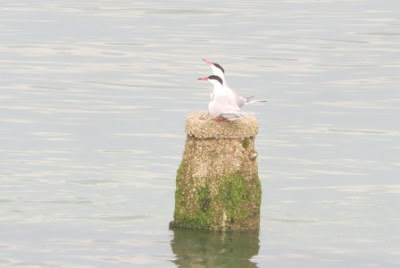 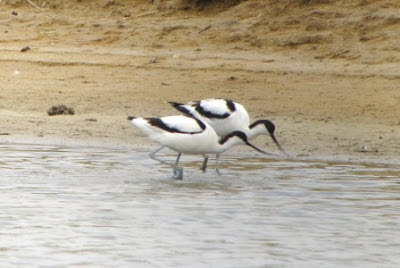 At Church Norton, about 40 each of Sandwich & Common Terns in the vicinity of Tern Island, and a pair of Mediterranean Gulls in the nesting area. Also 1 Whimbrel, 2 Bar-tailed Godwits & 15 Ringed Plover present. In the field being cultivated along the west side 8 Lapwing, 1 Common Gull, and at least 20 Med Gulls amongst about 200 Black-headed Gulls. (AH)
Posted by Andrew House at 12:30