Thursday, 22nd August: Rain overnight, clearing fairly quickly this morning to become sunny; sounds like promising conditions for a migrant fall, but it didn't quite work out that way and it was more of the same really...
Pagham Hbr : Church Norton: A quick look round this morning produced much the same as yesterday; 2 Tree Pipits chasing each other around, at least 4 Spotted Flycatchers, 1 Redstart and 5+ Garden Warblers and Lesser Whitethroats. Also a juv Curlew Sandpiper and 2 Whimbrel in the harbour (AH). Sidlesham Ferry: There were 4 Wheatears and 15 Yellow Wagtails in the field behind the Ferry pool, but still just 2 Common Sandpipers and a Black-tailed Godwit actually on it (JD/DS). Also, JW reports 32 Swifts and 70 Sand Martins east over Pagham this lunchtime (a bit of a session Jim?)
Further report late afternoon from Church Norton churchyard of at least one Pied Flycatcher, in the SW corner, best viewed from Hide. Also 3 Peregrines in the Harbour. (P.James/SOS) 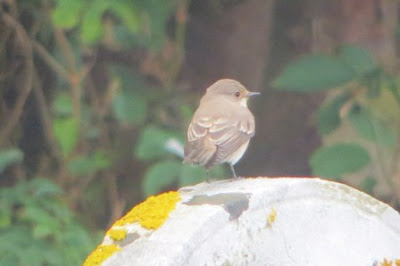 
________________________________________________
Wednesday, 21st August: Another warm and sunny day, with fairly similar results to yesterday bird-wise. A good deal of the birding attention was again focussed on Church Norton, where the churchyard was much to the fore, at least early on. That is until the persistent tidying team arrived to ensure their weekly disturbance to wildlife and removal of anything scrubby continued. I'm afraid I had a serious sense of humour failure there today; there were five in the p.t.t. having a loud lunch near the chapel when I walked in to have mine, so I opted for the shade on the opposite side. How nice the bench looked I thought - then I realised - they'd just treated it with wood stain, no signs, no verbal warning from the p.t.t. who looked on. I moved - onto a stone step - which I found too late was covered in the same paint. Long story short - it was all over my clothes and when I gently advised the p.t.t. - they laughed and suggested I'd spoilt their paintwork. A two-word discussion followed!! I'm not sure if this occurred before or after the following incident from Sarah Russell though I suspect it was actually after Sarah had spoken to them, " The unfit looking man doing the gardening said they do this every week which seems the same routine Manhood Wildlife & Heritage have.  I told him about the birds various people had seen there this morning, explained about migration, and said for the benefit of the wildlife work like that was better carried out toward the end of autumn but like all volunteers he was adamant the work had to be done regardless; I've seen him there before and he never says hello yet the elderly couple who used to look after the chapel were lovely and keen to encourage visitors.  Gardening and wildlife should and easily can go hand in hand but his attitude was very anti, even as he walked in he was making loud anti-birding comments to his mate so I suppose it's just a matter of going elsewhere on Wednesdays." Just what is going on with this lot I wonder? Anyone got any contacts with the Vicar at the main parish church in Selsey?  Ok enough of all that, on with birding news...

Pagham Hbr: A bit of a gathering of the locals this morning at Church Norton  and also a good few visitors, whilst most of the bird activity was concentrated in the churchyard and the hedge viewable from the back of the Hide. I did actually do a circuit along the beach to the Severals and back through Greenlease but it was not very productive. It is hard to give exact numbers and there could be some duplication, but minimum joint totals were:-
Whitethroat - 12
Lesser Whitethroat - 3
Blackcap - 3
Garden Warbler - 6 (possibly up to 8 or 9)
Willow Warbler - 12
Chiffchaff - 1
Redstart - 2 (probably 3)
Tree Pipit - 1 (possibly 2)
Spotted Flycatcher - 4
Wheatear - 1
Sand Martin - 20W 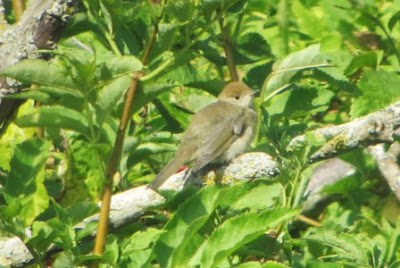 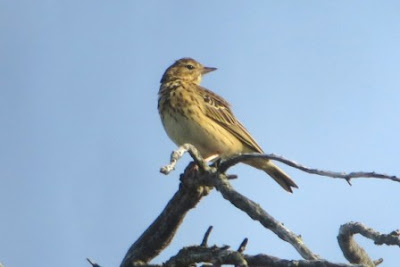 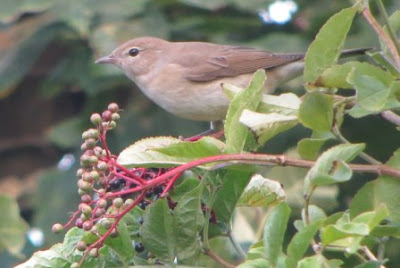 from the top, fem Blackcap, Tree Pipit and Garden Warbler, Church Norton (photos: Andy House)
North Wall area: In White's Creek 33 Redshank and 1 Spotted Redshank; on Breech Pool 43 Black-tailed Godwits and in the fields a Lesser and several Common Whitethroats, 9 Yellow Wagtails and 3 Roe Deer (JW). This evening, on Honer reservoir , the adult pair of Tufted Duck and 6 well-grown young, also a Little Grebe and a Common Sandpiper. Along the North Wall lot of Reed Warblers and 10 Sand Martins (CRJ).

Medmerry: I made a visit around midday, although it was very busy with heavy trucks back and forth throughout. Even so, I managed to view one of the large pools and also the creek (from the beach). Numbers had fallen at the latter and the totals were: 3 Yellow-legged Gulls, 2 Lesser Black-backed Gulls, 15 Med Gulls, 1 Sandwich Tern, 25 Dunlin, 3 Ringed Plover, 2 Little Ringed Plovers, 2 Common Sands and 1 Greenshank, plus 3 Wheatears and a fem Kestrel (OM). 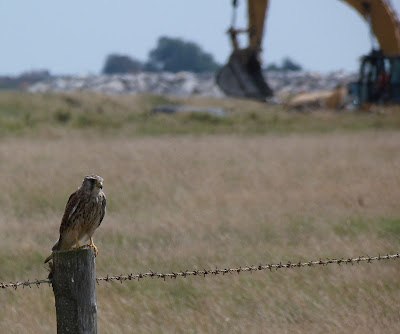 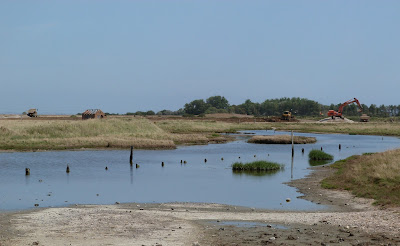 For anyone that hasn't been to the site or visited Medmerry recently, these two views give some idea of the scale of the changes. Above is the creek as viewed from the beach, whilst below the channel near the old concrete blockhouse, where the breach will occur. 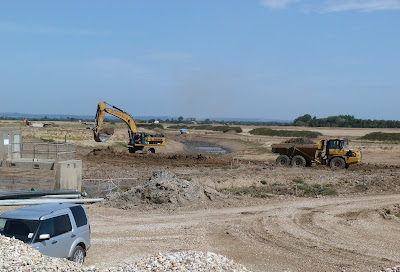 
Also, a late call from AH advising of 3 Whinchats along the West side this evening (pic). 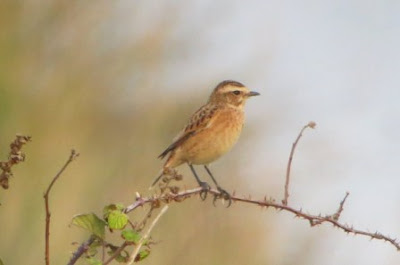 Tuesday, 20th August: Fine, sunny and dry with a calm sea. At last some migrants on the move... with Pagham Harbour receiving virtually all of the attention today. Thanks to all contributors.


Pagham Hbr: Ferry Pool: 2 Common Sandpipers and 4 Black-tailed Godwits were the only feeding waders, along with 40 roosting Lapwings and 200 Black-headed Gulls.
Church Norton: Some migrant activity at last - 2 or 3 Redstarts, at least 6 Spotted Flycatchers, a Garden Warbler, 3 Lesser Whitethroat (per A&YF), 5+ Blackcaps and numerous Whitethroats and Willow/Chiffs. Also 10+ Sand Martins, 30+ Swallows and 20+ Mediterranean Gulls amongst the Black-headed Gulls feeding overhead.
North Wall (per Terry Rawlings): A Whinchat & the Spotted Redshank present there this morning (AH). On the Breech Pool, 39 Black-tailed Godwits, 12 Lapwings and a Kingfisher,  whilst the North Fields held 4 Lesser Whitethroats, 3 Yellow Wagtails, a Wheatear and a Spotted Flycatcher; 470 Rooks at Marsh Farm and 25 Little Egrets in the harbour (JW). 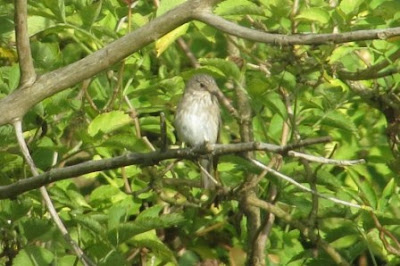 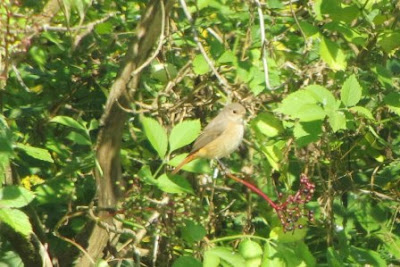 Spotted Flycatcher and Redstart, Church Norton (photo: Andy House)
A brief visit to the coastguard station end of Medmerry (7am)  turned up 5 Wheatears in the field, around 75 Swallows and 50 House Martins were gathered around the fun fair rides, then a Sparrowhawk swooped in and great clouds of birds took to the air giving a great swirling display including Linnets, Starlings and House Sparrows as well as the hirundines (SR). 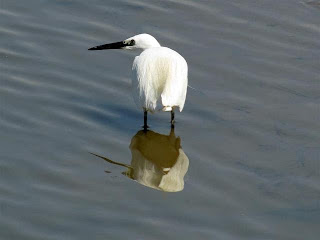 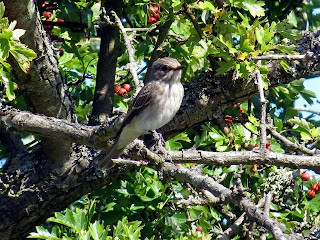 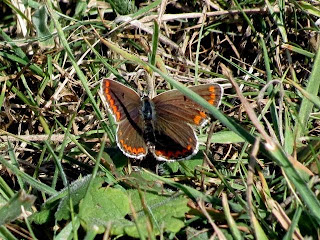 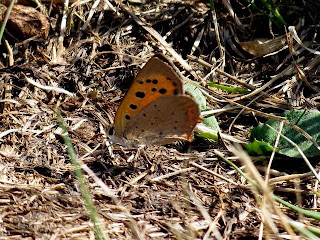 
A return visit to Church Norton this evening produced a Tree Pipit in the churchyard, along with the Spotted Flycatchers and Redstarts seen earlier, though no sign of the Pied Flycatcher reported on Birdguides. There were 3 Wheatears along the West side, a Knot, 4 Whimbrel and 5 Grey Plovers in the harbour (AH). 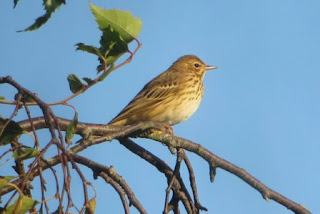