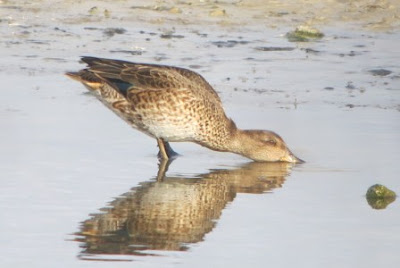 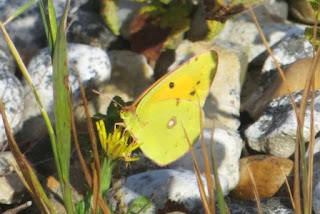 Teal on Ferry Pool and Clouded Yellow at Church Norton (photos: A. House) 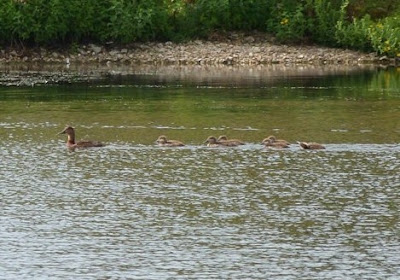 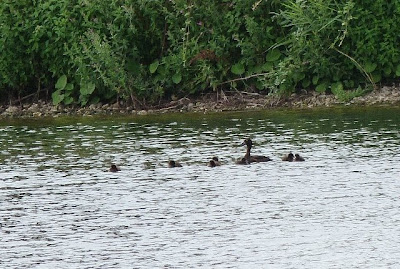 Chi GPs - Drayton pits: Shoveler - 2, Tufted Duck - 75, plus 2 females with broods of 12 and 4.
Pochard - 3 females with broods of 7,6 and 3 respectively, Great Crested Grebe - 3 pairs, one with a juvenile, Little Grebe - at least 4 pairs with young, Green Woodpecker - 2, Kestrel - 1 at possible nest-site, Common Buzzard - 1.
___________________________________________
﻿
Friday, 9th August: Sunny again with cloud but still warm. The only news so far is that the Curlew Sandpiper was again present in White's creek this morning...also a couple of LRP's on the Breech Pool.  Update:- 2130hrs: definitely a slow news day...can only add that 3 Peregrines were in the harbour today, and that Alan Kitson reckons the Curlew Sand is a female, as follows: "Using BWP it seems to me that the adult summer-plumaged Curlew Sandpiper at Pagham Harbour is female since it is quite big, is long-legged and long-billed and its red coloration is less than mahogany and is dappled with white."  Well I'm not quite sure I fully agree but it is clearly now well into moult, so it will be interesting to see how things progress.

_____________________________
Thursday, 8th August: A fine sunny day with some periods of cloud. The Curlew Sandpiper was joined by a moulting Spotted Redshank in White's Creek, resulting in a bit of a mini-twitch early on. Apologies to JW for omitting his reports of a Turtle Dove near Honer Farm in recent days; there was no sign of it though by late morning in a brief search. 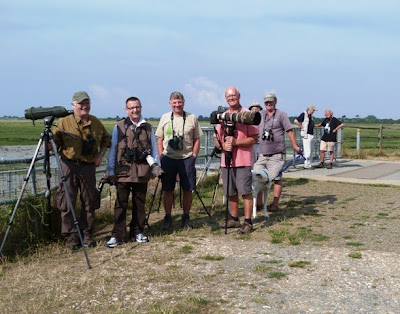 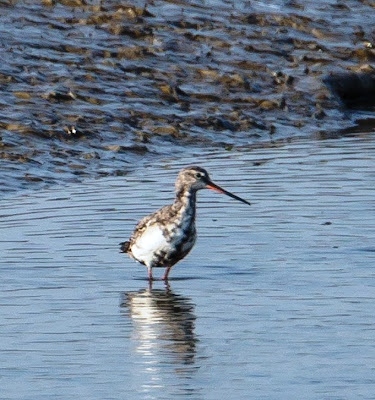 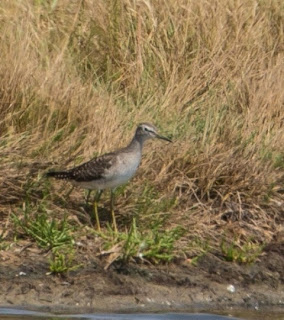 Wood Sandpiper, Medmerry (photo: D. Mason)
Selsey Bill: Sunny, some cloud, wind light SW. Predictably few reports today in the calm conditions, but there was some coverage from about 0900-1000hrs, the highlights being: Gannets - 55 os,  Common Scoter - 59E, Little Tern - 2 os amongst a flock of Sandwich and Common Terns, and small numbers of Sand Martins and Swallows. (G Trew/AAS).

Wednesday, 7th August: Decidedly cooler and cloudy with a few spots of rain early this morning when I arrived at Pagham Hbr, though it eventually became brighter and sunnier. The moulting (but still colourful) ad Curlew Sandpiper was again in White's Creek (viewable from the North wall sluice) but eventually made its way further south into the creek, remaining out of view for some time. On my arrival only Peter 'Palace' Callis was present; it was nice to see the bird but of course I took a good deal of stick following The Seagulls' dismal performance against lowly Newport in the League cup last night! After checking the Breech pool I fortunately had to leave in order to meet up with three Selsey stalwarts - Chris Janman, Eric Soden and Mervyn Jones (the latter on a short visit from Wales) - as we were leaving the Peninsula and heading inland for a butterfly trip. 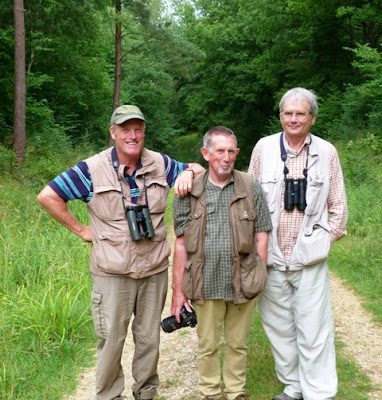 Last of the summer wine? No, (l-to-r) yours truly with Messrs Janman and Jones on a trip away from the  Peninsula to look for butterflies (photo: Eric Soden).

Today's bird news...
Pagham Hbr: North Wall/Breech Pool: Curlew Sandpiper still present, also 30 Dunlin, 20 Black-tailed Godwits, 32 Teal and the Black Swan still around. At least 6 Yellow-legged Gulls on the mudflats and 10 Sand Martins flew over S. (PC,OM,JW et al). Also a juv Little Ringed Plover. From the tip of Pagham Spit at high tide 3 Peregrines literally tearing into their lunch on the east side of Tern Island, mum and two young 'uns. On Pagham Lagoon a flock of 8 Little Grebes, just one juv and seven summer-plumaged adults.  (A.Kitson/SOS)
Ferry Pool: 2 Common Sandpipers, 38 Lapwing, 34 Teal & the family of Shelducks (AH). Church Norton: Plenty of raptors, not much else. A Marsh Harrier over the west side, 2 juvenile Peregrines and 2 juvenile Buzzards around Norton and a female Sparrowhawk scaring the Swallows. A couple of Whimbrel in the harbour but almost no passerines, not helped by the presence of a chain-saw, a lawn-mower and a strimmer all going in the churchyard! (AH) 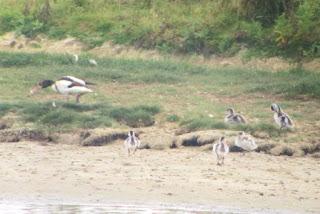