Saturday, 31st August: Another blast from the past today when former Pagham Hbr warden and Selsey regular Bob Lord appeared at the Bill with Jim Weston. The usual pleasantries were exchanged, before Bob reminded me of a few highlights from his notebook of the early eighties; 1981 saw a Honey Buzzard arrive (10/5), A Red-backed Shrike (exactly 32 years ago on 31/8), and a Little Auk (29/11) not to mention a sighting of Patrick Moore E along the beach that spring. In 1982 highlights included a Glaucous Gull (8/4), a Hooded Crow (12/5) and another Red-backed Shrike (10/10) whilst in 1983 sightings included a Pied Flycatcher in Bill house garden (17/4) and a juv Woodchat Shrike which caught a bumble-bee (7/9). After saying good-bye there was time for a quick photo before Bob and Jim were off to view Medmerry, with Bob sending his regards to all that know him. The clear highlight of the morning though was a movement of c.70 BALEARIC SHEARWATERS, perhaps a Bill record. Sam Hill began the watch early, being joined later by GH and AH - they fortunately called me and even I managed to log about 25 before things went quiet. Most birds were moving east in flocks at various ranges - more details later... 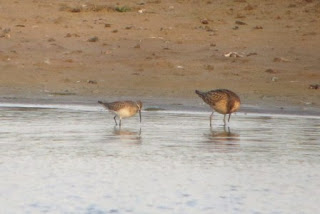 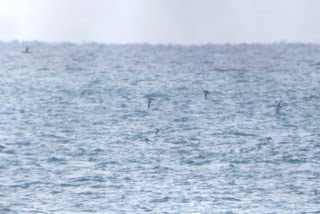 (top) Ruff and Curlew Sandpiper at the Ferry Pool


(above) just discernible, a flock of Balearic Shearwaters off Selsey Bill (photos: AH)

Friday, 30th August: Sunny, dry and quite warm again.
Pagham Hbr: Ferry Pool: Curlew Sandpiper, Common Sandpiper, 2 Green Sandpipers, 12 Redshank, 6 Black-tailed Godwit and 40 Lapwings this morning. Also 15 juvenile Shelduck and 40 Teal.
North Wall: Up to 5 Curlew Sandpipers in White's Creek, including one moulting adult. Spotted Redshank, Common Sandpiper, 3 Snipe, 30 Black-tailed Godwit and 4 Pintail on the Breech Pool. Also 3 Whinchat along the far fence-line and about 20 Yellow Wagtails in with the cattle, and a Peregrine over (AH). 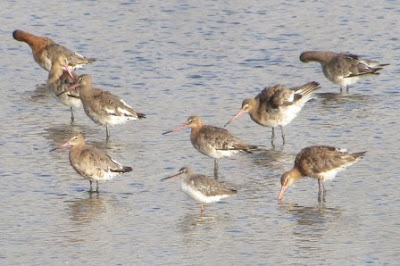 Thursday, 29th August: As it seems that yours truly is about the only active Sussex birder not to have seen a Pied Fly in a good autumn for the species, I spent time today trying to correct that - and failed again. I checked out the whole area around and beyond the Visitor centre and managed to dig out four Spotted Fly's - but Pied Fly was there none! There were plenty of common migrants about earlier in the morning but it rapidly died down as it got warmer and sunnier. Whilst about to check the Ferry Pool with Andy House, a couple of powered hang-gliders appeared and one of the idiot pilots deliberately swooped down to less than 50ft over the pool, scattering birds in all directions, though fortunately they returned when peace was re-established. Most of the observer activity was again at Pagham harbour and
although there were plenty of birds on the move there was nothing unusual; meanwhile it seems little or no attention has been paid to sea-watching at the Bill for some while during this warm spell, so hopefully the sea will deliver something soon.
Pagham Hbr: Visitor centre area/Discovery area: Spotted Flycatcher - 4, Blackcap - 6, Whitethroat - 6, Willow Warbler - c.10, Yellow Wagtail - 10 over,  Sand Martin c.50.
Sidlesham Ferry Pool: Curlew Sandpiper - 1 juv, Green Sandpiper - 2, Lapwing - 25, Black-tailed Godwit - 4, Shelduck - 20 (mostly juv's) (OM/AH). 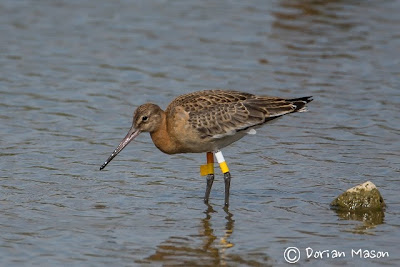 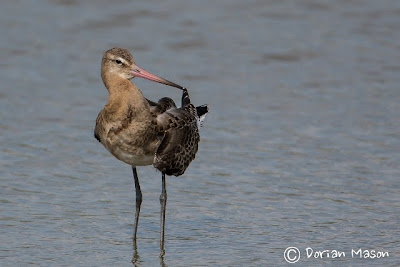 above: Black-tailed Godwits on Breech pool and
below: Spotted Redshank at same location (photos: DM) 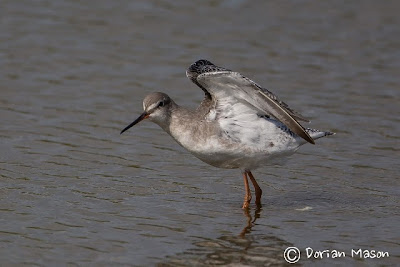 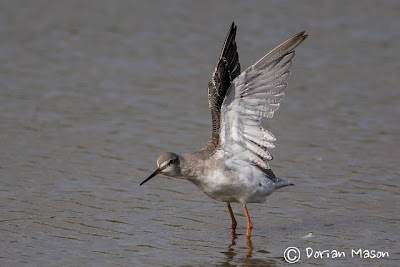