Four Egyptian Geese flew over Jim Weston this morning on Pagham rife but then dropped down into an inaccessible area of farmland near the agricultural reservoir. The only other news received thus far concerns the Medmerry Snow Buntings; four together were seen on the rough grassland (SR/BJ) whilst the fifth was seen by other observers, apparently not now associating with the flock...... Further updates now received from Bernie Forbes & Dave Smith who saw them still together.....

What a lovely cold bright sunny day with plenty of quality birds, spending the entire day on the peninsula. Our first birding stop was at Medmerry where the five obliging Snow Buntings were feeding just south of the car park in the rough ground.
Onto Selsey Bill, spending an hour or two watching the sea which was very calm although the low sun was making any observation to the east extremely difficult! We noted 3 Great Northern Divers and 4 Red-throated Divers moving back and forth. The flock of 40 Common Scoter comprising of all females was feeding just offshore with 2 Slavonian Grebes and 3 auk sp plus a Razorbill.
Church Norton: 2 Firecrests around the bushes near the double seats/hide. At least 350 Knot in the harbour. Offshore from the Norton spit the highlights were 4 female Velvet Scoters, 14 Eider and 20 Slavonian Grebes (BFF/DIS).

An even more empty Breech Pool held 11 Black-tailed Godwits, 1 Bar-tailed Godwit, 5 Common Snipe and 140 Teal. Further along the North Wall were 103 Canada Geese with 46 Wigeon and 17 Curlew. Whilst walking up Pagham Rife I watched a flyover by 4 Egyptian Geese that appeared to land on the new reservoir to the north of Church Lane. (I have no access to this place). The Honer reservoir was quiet with just 3 Pied Wagtails, 1 Little Grebe and 1 Green Sandpiper. Behind Honer Farm Cottages were 270 Brent Geese and 33 Lapwing. In the fields between Honer and Marsh Farms were 730 Wigeon. Most of the fields that held Brent Geese over the weekend are now occupied by bird-scarers, which have achieved their objectives (Jim Weston).

Selsey Bill - additional 0800-0930hrs: NW3 - Bright sun
Paul Matson covered the Bill prior to BFF/DIS visiting and logged much the same, but additional of note were: Little Gull - 1E, Sandwich Tern - 1E, Redshank - 2W and Sanderling - 1 ob. He also enjoyed a fine sunrise (see pic's below - all 3 by PM) : 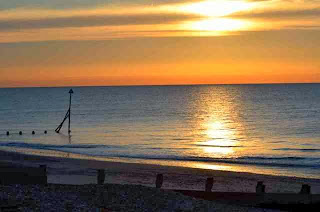 Sunrise at the Bill at 8am (or without the giveaway Green Triangle it could be any island in the Indian Ocean !) 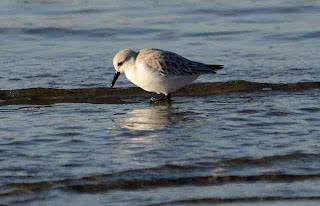 Sanderling on the beach at the Bill 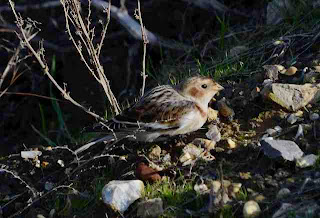 Quite an interesting morning on the Peninsula really, with several surprises given the wind direction and late-November date. Andy House turned up 4 Long-tailed Ducks off Church Norton, then I went to check out the flock of Snow Buntings at Medmerry to find there are now 5 birds. Meanwhile a Black-necked Grebe was also located in the harbour mouth at Pagham Hbr, having apparently been present a day or two. Fuller details follow...

Pagham Hbr: Church Norton: Big surprise this morning, finding four Long-tailed Ducks asleep on the sea offshore on the low tide. Fairly quickly they woke up and inevitably spent most of their time after that underwater! Not entirely sure of age/sex but they all had a lot of white on the head but no 'long' tails. Also at least 10 Slavonian Grebes, 8 Great Crested Grebes and 20 Red-breasted Mergansers offshore, too, and 6 Common Scoter flew east (AH).  update: At least 3 of the 4 still present offshore early afternoon; also c.12 Slavonian Grebes, c.80 Wigeon and 30 Teal also present. Nearby a Chiffchaff and a Firecrest along the path from the car park (OM). Also, news today of a Black-necked Grebe seen and photographed at the harbour mouth at Pagham; it has apparently been present a day or two (Ivan Lang /per T. Guy) 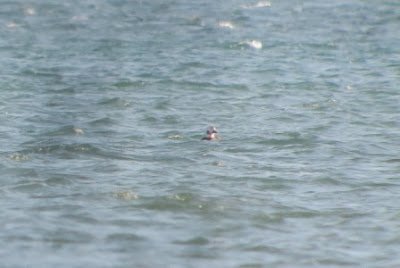 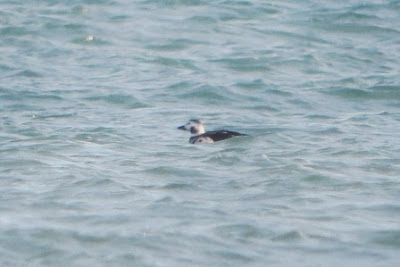 Long-tailed Ducks off Church Norton (A. House)
Medmerry: a late morning visit to check out the flock of 4 Snow Buntings produced a surprise when I found the flock now contained 5 birds! I thought I'd better try and obtain a snap to silence any of the disbelieving locals who would question my eyesight or numeracy skills, and eventually managed to obtain the below pic (look hard - they are all there!) Also c.250 Brent Geese flew in to feed in the back fields (OM). 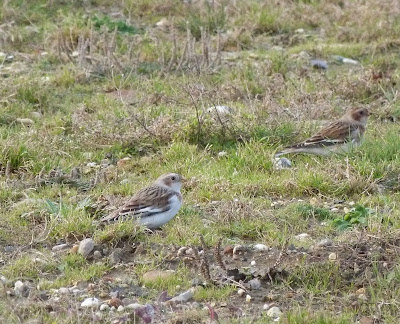 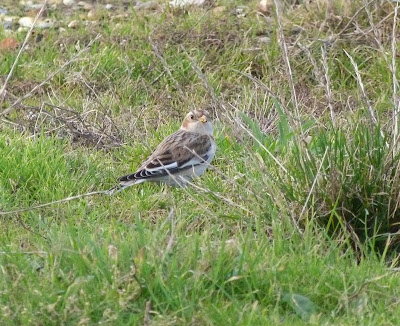 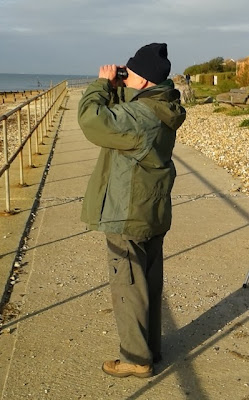 Doctor Who? Well almost - actually it's Peter Davis, a (retired) GP, scanning the scoter flock at the Bill!
I took a short walk along Medmerry Beach late this afternoon.  A pair of Stonechats, 9 Pied Wagtails, a Kestrel perched on the rocks, 2 Little Egrets, and looking out toward Sidlesham at dusk, the fabulous sight and sound of many thousands of Brent Geese flying in to roost (SR).


I did a bike session from Runcton, N Wall,  Ferry and back through Marsh & Fisher Farms hoping to find Peter Callis’s Whoopers today but no luck:-
Honer Lane ; 1 Buzzard, 1 Stonechat , 160 Lapwing and a large flock of Brent trying to put down on winter wheat north of the reservoir, but were discouraged by the local shotgun merchant.
Weedy Field; a mixed flock of c60 finches. A single Green Sandpiper over the rifes, seen from the North Wall:  On the Breech Pool an obliging Water Rail and 5 Snipe.
At Owl Copse a single Chiffchaff; Halseys Farm 80 Canada Geese and 2 Buzzard.
Ferry Pool, 16 Shoveler; Marsh Farm 60 Golden Plover,8 Pied Wagtail, 4 Robin and 2 Yellowhammer.
Fisher Farm: 1 Little Egret,6 Pied Wagtail,15 House Sparrow,6 Yellowhammer and a strange looking Buzzard with white underparts, a lot of white on the head , white underwings and much white on the upperwing coverts (CRJ).
Posted by Birderowen at 17:21