Sunday, 3rd November: Mainly bright and clear this morning with a strong to gale force westerly blowing. Little reported by early afternoon and with rain forecast for later it may stay that way - but you never know!
At Selsey Bill an uninspiring watch included a few Brent Geese, 2 Wigeon, several Great Crested Grebes,  5 Stock Doves and a few finches moving (JA). After visiting Church Norton I did 45 mins at Selsey Bill (11.15-12.00), 4 Med Gulls on the sea, (no Grey Phal's unfortunately!) but a distant Arctic Skua os  viewed for one second before it disappeared into the troughs (CRJ).
At Pagham Hbr, the Red-backed Shrike was still present (per CRJ), whilst AH comments "Not much to report at a very windy Church Norton today - a couple of Peregrines hunting, a dozen Shelduck and a few Great Crested Grebes in the harbour, and three Skylarks over." 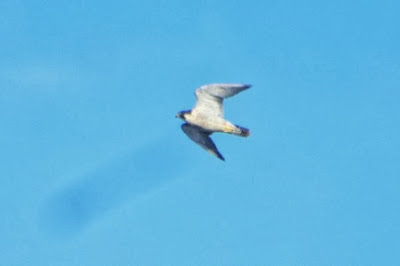 On the way home I called in at Halsey’s Farm to see the Red-backed Shrike again, which performed brilliantly on it’s usual hedgerow on the sunny side of the hedge until I left at 1255 (CRJ). The Spoonbill flew from second Severals in the direction of Medmerry 3pm (SH). 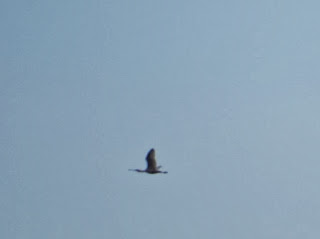 Record shot of the Spoonbill in flight (photo: Sam Hill) 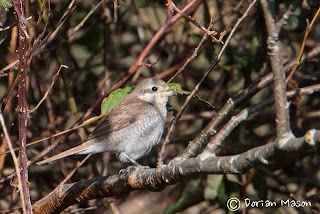 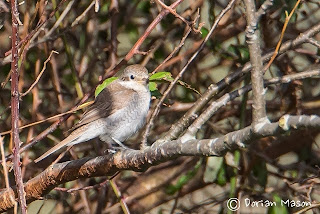 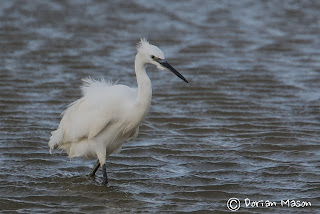 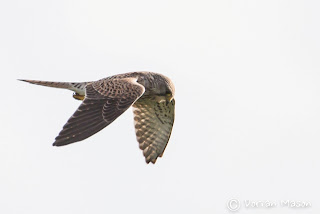 Little Egret and Kestrel, North Wall (photos: Dorian Mason)
Eight Shoreham District OS members gathered in Church Lane this morning for a walk around the North Wall. Weather conditions were far from perfect with the threat of
rain in the air and a very blustery SW west wind. Venturing out along the
wall we took the lower path past the Breech Pool having two fly by views of
a dashing Kingfisher and couple of Reed Buntings trying to compete with the
gusting wind! On the pools a large flock of calling Black -tailed Godwits
were nervously feeding, finding a couple of Common Snipe around the edge of
the marsh. We headed for Halsey's farm checking out the hedgerows for
yesterday's shrike although one returning birder reported that he could not
find it! Staking out the surrounding fields and seeking a little shelter in
the lee of one of the hedgerows we enjoyed a couple of Stonechat feeding
along a fence line as well as a few Meadow Pipit .Delightful male Peregrine
made a close fly past and we counted around 130 Golden Plover wheeling
around out in the harbour. Perseverance paid off when Dave Smith located the
Red-backed Shrike in a nearby hedgerow. We enjoyed cracking views of this
late migrant as it continuously fed catching wasps on the sunny side of the
shelter belt of trees, the crescentic markings on its breast showing well in
the scope. Later on we tried to walk around Owl Point although forced back
by the high tide, the light on the ducks and waders in the harbour from this
angle was just superb. Compensation in the way of 6 roosting Avocets amongst
a group of Curlew. Returning by the shrike we had further close views and
along the North Wall 3 Rock Pipits being buffeted by the wind. After lunch
we took a windy stroll down the east side to the lagoon. In the hedgerow
alongside the Slipe field we could hear calling Chiffchaff (at least 3
birds) with Long-tailed Tit and Goldcrest. On the lagoon 11 Med Gulls were
loafing with the Little Grebe (at least 30) and 3 Great-crested Grebe. At
this point we ventured back as there was no shelter from the increasing
wind. Despite the strong gale force wind we all enjoyed the walk and for
some a new bird and new location (Bernie Forbes+Dave Smith).
﻿
_________________________________________________________
Saturday, 2nd November: A day that began brightly but turned increasingly wet and windy. Coverage of Pagham Harbour and the Bill was quite good, the best birds reported being the Red-backed Shrike and a ringtail Hen Harrier at the former (Halsey's farm area) and an adult Little Gull and 2 Great Northern Divers off the latter. A Black Redstart was also seen at Sea lane, Pagham. A full sea-watch log appears below, but I start with news from the harbour, and thanks to all for keeping the news coming... 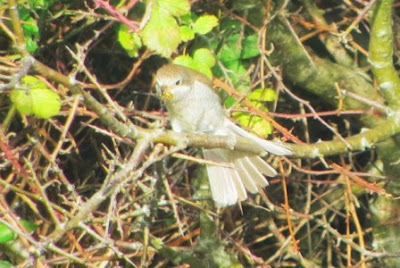 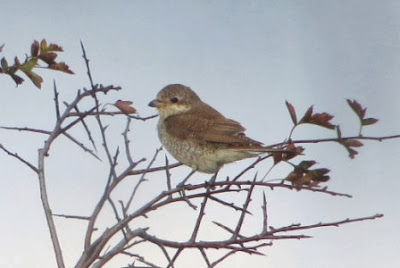 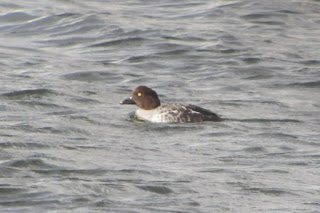 juv Red-backed Shrike at Halsey's Farm, and fem Goldeneye on the Lagoon (photos: A. House)
Pagham Hbr: North Wall: The juvenile Red-Backed Shrike was showing well in the hedgeline east of Halsey's Farm this morning. It caught at least half a dozen wasps while I was watching it, bashing the sting out on a branch before devouring them. Not a lot else in high winds and a big tide - a flock of Snipe that grew to about 20 went round and round over the Breech Pool, along with about 60 Golden Plover and a couple of hundred Lapwing, and at least a dozen Reed Buntings were about. Pagham Lagoon: One Goldeneye, 4 Wigeon, 60 Mediterranean Gulls and 40 Little Grebes was about it (AH). JW also added a few Tufted Ducks and 2 Great Crested Grebes, then just off the reserve, a Black Redstart in the central trees along Sea Lane, Pagham.
S&SaH report that the shrike was still present at 1330hrs and a ring-tailed Hen Harrier was also patrolling the area.
Selsey Bill (0640-1040hrs): Dry and sunny, some cloud. Wind WSW 3-4  (Obs: JA/OM et al)
Gannet - 4E, 6W
Brent Goose - 20W
Common Scoter - 6E, 3W
R/b Merganser - 4E, 1W
Great Crested Grebe - 3E, 6W, 3 os
Great Northern Diver - 2 os
Little Gull - 1 ad W
Med Gull - 3 os
Meadow Pipit - 18W
Pied Wagtail - 1E, 7W
Goldfinch - 205W
Linnet - 14W
Greenfinch - 94W
Chaffinch - 9W
Additional: 1215-1400hrs:  (Obs: OM) Overcast, heavy showers, wind increased to SW7-8
Gannet - 224W
Brent Goose - 43W
Red-throated Diver - 1W
Great Crested Grebe - 2W
Razorbill - 1W
Kittiwake - 3W 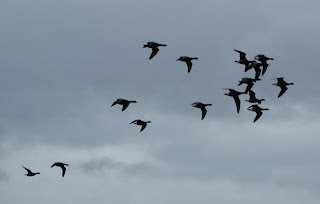 Friday, 1st November: Well that's it then, October is over - but the early part of this month can also be exciting with some unexpected surprises so let's hope it delivers. Not a promising start today though, being dull and overcast with frequent showers, and the brisk SW wind produced surprisingly little offshore except the first Great Northern Divers of the autumn/winter. Late news of a juv Red-backed Shrike at Pagham Hbr, around the wire fence at the entrance to Halsey's Farm (from North Wall); it's worth checking this out as it's a late date for the species (2 reports per SOS website).