A bright and breezy autumn day, with the recent activity at Church norton attracting plenty of bird-watchers.

Church Norton: Another morning spent predominately along the beach/spit, produced the following offshore - still at least 4 Long-tailed Ducks, 7-8 Common Scoter, 8-10 Eider, 12+ Slavonian Grebes, a Red-throated Diver and a Goldeneye (with another 5 in the harbour). A big flock of Knot were in the harbour and a few Black-tailed and Bar-tailed Godwits present also, plus a Firecrest was seen in the churchyard.
A further look this afternoon on the low tide didn't add anything, but a female-type Marsh Harrier was hunting over the 1st Several. (AH) 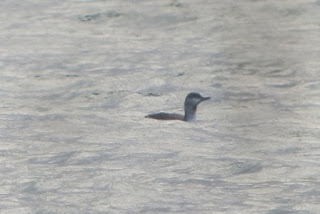 Red-throated Diver off Church Norton 30/11/13 (AH)
Sidlesham: A Reed Bunting on our bird table this morning, only the second one I have seen here.(AH) 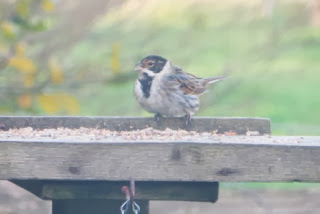