I arrived at the Bill this morning to find AH and JA already in situ. There was a bit of movement going on, albeit fairly standard fare  - Gannets, auks and Kittiwakes - but at least we had chance to discuss such things as previous records and plans for the future. Further updates will follow... 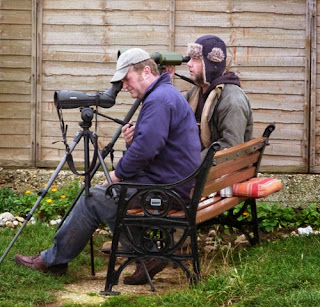 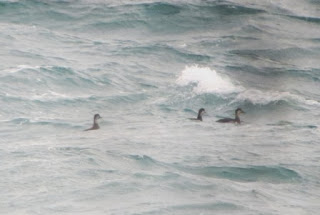 Common Scoters on a rough sea at the Bill (A. House)
Pagham Hbr: I paid a quick visit to Church Norton this morning, meeting Bob Turner near the car-park. Two Ravens came out of the wood cronking and went down on the shingle spit. At first offshore I could only find 3 fem Long-tailed Ducks, but later all five were feeding together, and later still I had very good views of the 2 males feeding off of the 2nd Several breakwater. There were also c30 Brent and a fem Shoveler offshore, but I didn’t see any scoters or strangely any  Slavonian Grebes, perhaps because the tide was falling (CRJ).
The North Wall area held 102 Canada Geese and 2 Water Rails (Breech Pool), c.400 Golden Plover, c. 1000 Lapwings, 25 Black-tailed Godwits, and a single Spotted Redshank - the whole lot taking to the air with other wildfowl when shooting began on adjacent farmland (an increasingly common situation). A check of Pagham Lagoon failed to provide any excitement; a single Goldeneye and a Pochard were the only noteworthy additions to the usual cast of Coots, a handful of Tufted Ducks and around 40 Little Grebes (OM)

Selsey: I took a walk around East Beach Pond in the hope against all hope of seeing something different.  In a way my wish came true but not quite in the way I'd hoped, as I found myself mobbed by 7 Muscovy Ducks, so presumably Swanbourne Lake at Arundel is missing a few!!  Much as I like seeing something other than Mallard, Coot and Moorhen, I would like something WILD next time (SR). 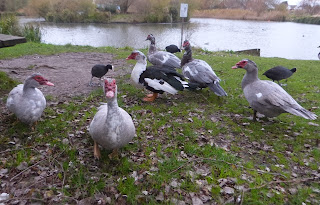 Andy House was again at Church Norton beach this morning where the sea was flat calm; the group of 5 Long-tailed Ducks was still present, together with 5 Velvet Scoters and a Goldeneye. Whilst on the subject of Andy, he will be running the blog this weekend so all details to him please for those days; meanwhile it seems he saved the day again blog-wise, with no other reports received.


Pagham Hbr: Back to Church Norton beach again to make the most of the still conditions. The five Long-tailed Ducks were still offshore and now five Velvet Scoters as well. Also offshore were the dozen Eider, a single Common Scoter, a minimum of 24 Slavonian Grebes, 17 Great Crested Grebes, 32 Red-breasted Mergansers and a Goldeneye (with another in the harbour mouth). A single Sanderling was on the beach and the Peregrine was upsetting everything in the harbour (AH). 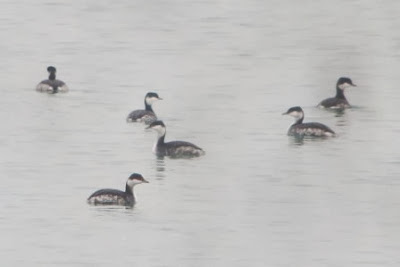 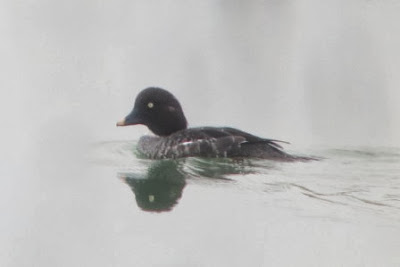 Wednesday, 27th November: A dull, damp, grey and dreary day with frequent light drizzle and light wind. The only report received so far is from Andy House who had a productive morning at Norton beach...


Pagham Hbr:  Church Norton: Spent the morning on the beach and the spit looking offshore. The light was awful, but the flat-calm sea allowed me to see just how much activity there was. There are now FIVE Long-tailed Ducks, staying as a two and a three, offshore (I think 2 x 1st winter males, 2 x 1st-winter females and a juvenile type). Also, I made a conservative count of 26 Slavonian Grebes, plus 16 Great Crested Grebes, 4 Velvet Scoter, 11 or 12 Eider, 2 Red-throated Divers and 32 Red-breasted Mergansers. Also, the regular female Merlin was on the spit (AH). 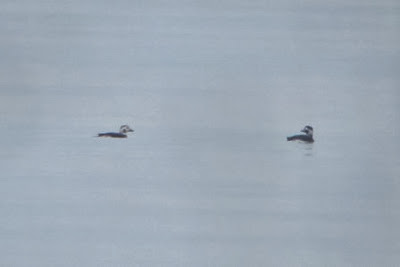 above and below: groups of two and three Long-tailed Ducks off Church Norton (A. House) 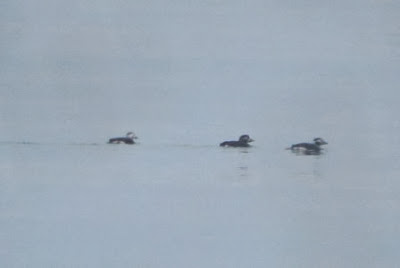 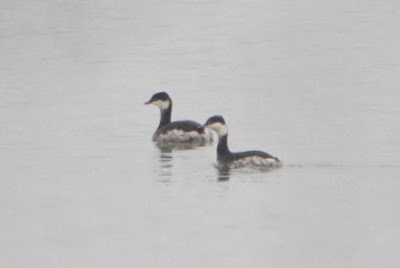 Slavonian Grebes and Merlin at Church Norton (A. House) 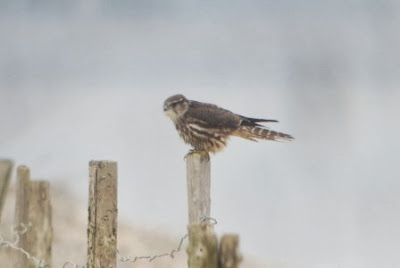