Wednesday, 12th February: Here we go again with another storm due to batter us from late morning onwards. Not living on the peninsula, I must admit I was put off today from making the slow journey down to the Bill by the weather forecast, as only the briefest of dry interludes was predicted. Well it's still dry at 1100hrs as I write this, but it seems I didn't miss too much anyway, as the below hour's seawatch by AH/CRJ indicates! (OM). 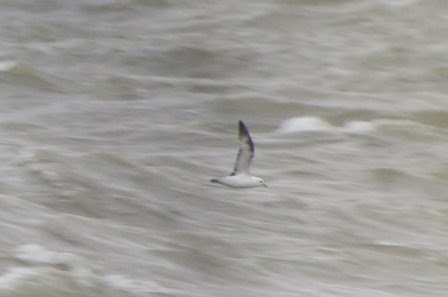 Fulmar (above) and Kittiwake off Selsey Bill (AH) 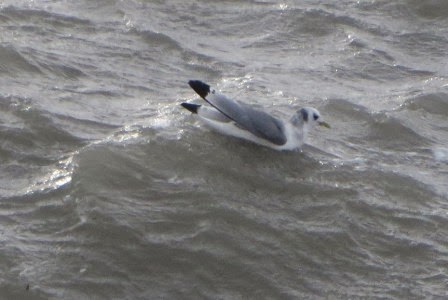 Following on from yesterday's comments by AH on the subject of Badgers in the Selsey/Norton area, the following input from Steve Hooper may be of interest:-
I hope I can update you on the presence of Badgers in the Selsey area. In late April or early May about 25 years ago (I know it was around "Pom" time in the late 'eighties, but I can't remember exactly which year) I was doing some work for a farming contractor on what were then fields on the left hand side of the road when heading south into Selsey village, just past the roundabout after the turning into Church Norton.
Although I never actually saw a live Badger, there were the unmistakeable signs of Badger activity (territorial marking, etc) alongside one of the hedgerows that was grubbed out when the new estate was built a few years ago. I mentioned this to the contractor at the time, but I was asked not to tell anyone else - they had been there since he was a boy, and he didn't want them to be disturbed, but I guess It's o.k. to mention this now as he's been dead for many years. Hope this is of some use. (SH)
Tuesday, 11th February: Back to another period of rain and gales sweeping in from the Atlantic. There still seems to be no end in sight as gale follows gale, with the odd day of respite in between. Today's report starts with two items of belated news gleaned from the SOS website; one reports the Long-tailed Ducks still off Church Norton, whilst the other is a report from a birding Selsey fisherman who saw some Bonxies off the Bill ....

10th February: (1) An afternoon visit to Pagham produced three Long-tailed Ducks off shore adjacent to The Severals. Also two Bar-tailed Godwits on the adjacent spit amongst a flock of approximately 40 Grey Plovers. Two Velvet Scoters flew E to W, landing on the sea close to the 'basket' marker. Three Red-breasted Mergansers offshore and a Peregrine causing usual havoc over the harbour...! (Chris Newton, per SOS).

(2) From Chris Wilson (Selsey fisherman): We had a breezy but interesting day offshore. First half of day there were about 10 Great Skuas and numerous gulls, then when we headed off west where we had a pod of between 10-20 dolphins around us. Then midday there were two skuas, an adult and young Gannet feeding alongside boat, less gulls pm, and all day plenty of Razorbills & Guillemots but no Puffins. A typically good show of birds on a breezy day! (per SOS).

One further bit of news for yesterday was of a dead Badger seen by the roadside just north of the Ferry, which SH & I agreed was the first either of us have seen on the peninsula. Not entirely sure their arrival on the peninsula is a good thing with the number of ground-nesting birds increasing both at Pagham & Medmerry.

Church Norton: Almost birdless in the harbour, but half a dozen Goldcrests and Long-tailed Tits were feeding along the path. (AH)

East Head: Not much to report, despite the nice weather - 1 Great Northern Diver, 6 Red-breasted Mergansers and 5 Great Crested Grebes off the northern end, many hundreds of Brent Geese all over the place, but few other wildfowl save a handful of Wigeon and Teal, and wader numbers seemed low, too - a few Redshank, Dunlin and Grey Plover and 100+ Lapwing being the sum. Also at least 50 Skylarks and 20 Meadow Pipits about. (AH) 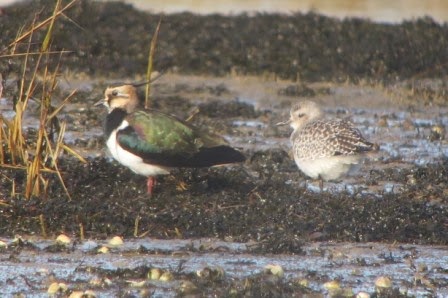 Lapwing & Grey Plover (above) and Dunlins off East Head (AH) 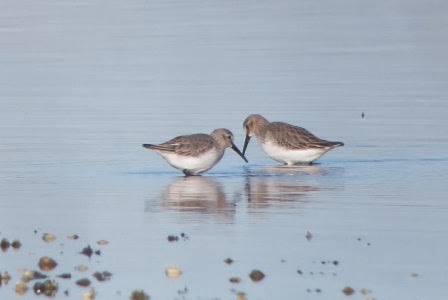