Please note: It is quite possible my email has recently been hacked; I'm not sure of the scale of this and have taken steps to prevent further problems, but for security please no not open any unexpected emails or attachments purporting to be from OM for the time being.

Church Norton: Not much better here, best being about 300 Black-tailed Godwits in two flocks, 2 Bar-tailed Godwits, 100+ Knot & Dunlin, a Mediterranean Gull and a few Common Gulls in the harbour, and 2 Jays in the churchyard.(AH) 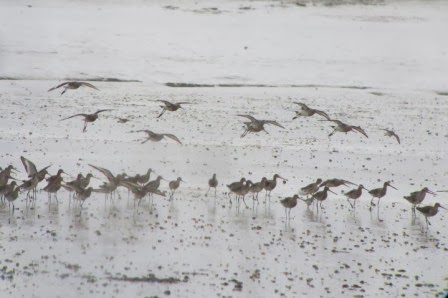 Black-tailed Godwits in the harbour (AH)


Wednesday, 19th February: A pleasant morning starting with light cloud and a calm sea, although the wind increased considerably to a WSW 4 with thicker cloud as the day progressed.

East Head: Great minds thinking alike - OM and I turned up for another potentially futile search for the Snow Bunting, but today in nice early spring weather we were in luck - and there he was, tucked in on the shingle at the northern tip, untroubled by the many dogs and walkers! Also seen out in the harbour were 3 Great Northern Divers, 3 Long-tailed Ducks and around 15 Slavonian Grebes, along with about half a dozen Great Crested Grebes and at least 20 Red-breasted Mergansers, and there were at least 700 Brent Geese on the grass.(AH) Snowhill Marsh held nothing out of the ordinary; plenty of Teal and just singles of Greenshank and Spotted Redshank being about the best (OM). 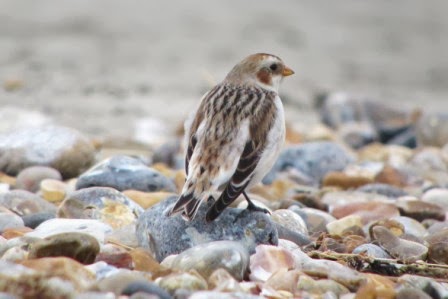 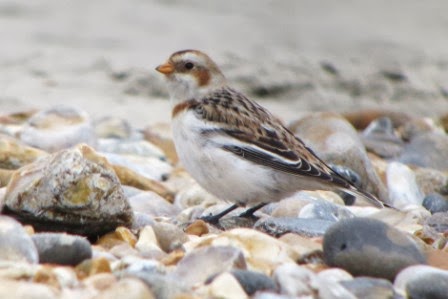 Pagham Hbr: North wall: A pair of Great Crested Grebes have arrived on the Breech Pool hopefully 3rd year lucky. There was a lot of activity at Owl Copse where Grey Herons are busy nest renovating, there were 10 Herons circling the Copse at one point. The highlight however was a Marsh Harrier coming across the Harbour and zooming off in a north westerly direction. On the Lagoon was a Little Gull which later flew off onto the Harbour. Other birds included 26 mewing Med Gulls, many coming into breeding plumage, 9 Goldeneye, 2 Red Breasted Mergansers, 16 Tufted Duck, 3 species of Grebe - 1 Slavonian, 1 Great Crested and 22 Little. (JW). 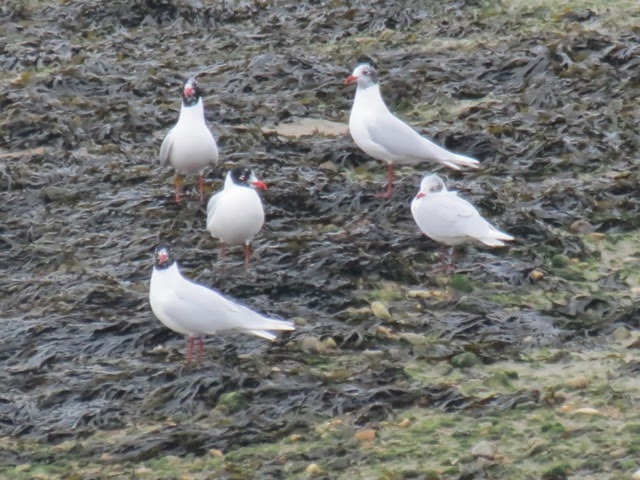 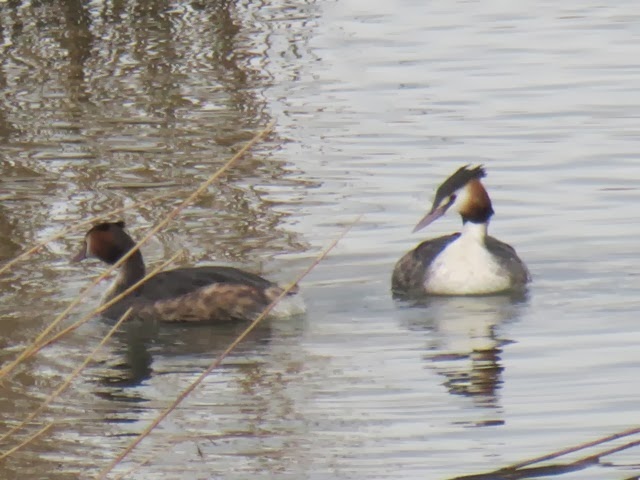 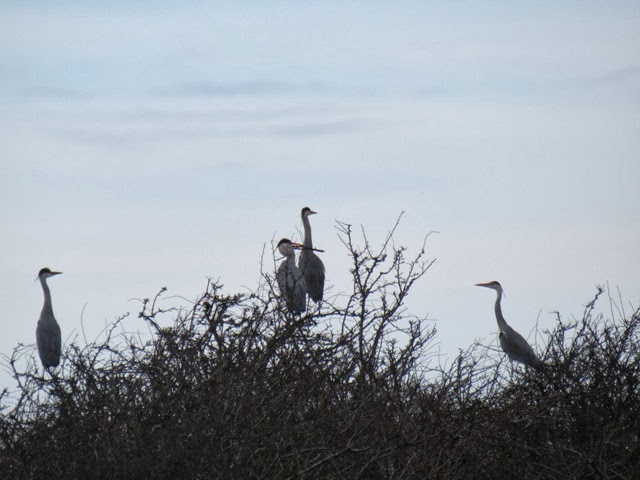 
This morning I rode down to Honer Farm, just a single Buzzard and 6 Roe Deer on the way. On the fields north of the North Wall were 3 Buzzards, 11 Magpies and 30 Curlew. As these flooded fields and the North Wall to Halsey’s Farm are impassable on the bike I returned to South Mundham and rode to Marsh Farm via Fisher. Very few birds about on the fields today but I did see a flock of 30 Fieldfare, 12 Reed Buntings, some in summer plumage and a spanking male Yellowhammer. (CRJ).
Selsey Bill (1015-1215hrs): Wind light WSW   (Obs: C & M Eames)
Red-throated Diver - 1E
Great Northern Diver - 2E, 3os
Slavonian Grebe - 1 os
Shelduck - 9W
Common Scoter - 27 os
R/B Merganser - 4E, 10 os
Razorbill - 1 os off E, 1W
Arctic Skua -  1E reported  (Apparently an imm pale-phase bird, but an exceptionally early date for a migrant, so notes may be required. Observers confident of ID).
Kittiwake  - 1 os
Fishbourne Creek: An excellent morning's birding here today. There were at least 30 Yellowhammers feeding in the field next to the church and a pair of Great Spotted Woodpeckers in the trees. Out in the Creek we found two Greenshanks and a Spotted Redshank along with well over 60 Redshanks, 50+ Dunlins and 15 Grey Plovers. There was a large number of Wigeon, five Goldeneyes, three Red-breasted Mergansers, three Lesser Black-backed Gulls plus about 80 Black-tailed Godwits. In the fields we found a Grey Wagtail, 8+ Meadow Pipits, a single Rock Pipit, two male Reed Buntings and a single Linnet. Our last birds of the day were a single Green Woodpecker and a pair of Jays. (Dave and Jean Killick, per SOS website).


Tuesday, 18th February: I begin today with a short editorial. This blog began life in early March last year, so as we approach the first anniversary it's time for a brief review. Initially the focus was on Selsey Bill, but it soon became apparent that contributors and readers also considered news from the rest of the Peninsula to be of equal importance, so this aspect was quickly adopted. Other changes or improvements (depending on your point of view) have also gradually evolved; the use of different coloured text for different areas of the Peninsula, the inclusion of plenty of photo's (even if record shots), a variety of pages covering different aspects ranging from the archives to a yearly summary, but probably most importantly of all the adoption of Andy House as joint editor. So far the blog has managed to carry at least some news on every day since its inception and this would have been impossible without Andy's valuable assistance; no doubt there will be a time when we are both away and things slip a little, but c'est la vie! Basically, the blog has exceeded my hopes and expectations, and judging by the hit rate of anywhere between 200 to 400 page views daily it seems to have been well received by readers, perhaps because the news is always current. So why do I tell you this? Well, complacency will lead to stagnation, so Andy and I are currently looking at ways in which things might be improved - not change for change's sake and if it ain't broke we won't fix it - but subtle changes to keep it consistent, current and relevant. Such things could include a change in the blog title, the formal adoption of a colour-code for specific sites (e.g. blue for the Bill, green for Pagham Hbr etc), and a change in the blog layout. If you have any ideas please contact Andy or I, but do also make allowance for our older-generation lack of technical expertise, and the vagaries of the Blogger system itself! (OM). That's enough, on with today's news....

East Head: The long-staying but very elusive Snow Bunting was at the northern end again today, as follows: Went over to East Head where I lucked into the male Snow Bunting in the NW corner - very confiding until disturbed by another ignorant dog-walker. A single Slavonian Grebe was fishing with a male R/B Merganser inside the Head itself. A Black Brant was with the Brent flock by the car-park and a very confiding - and vocal - Med Gull was strutting its stuff there too. No sign of the Dartford or any Sandwich Terns unfortunately (Ads Bowley). 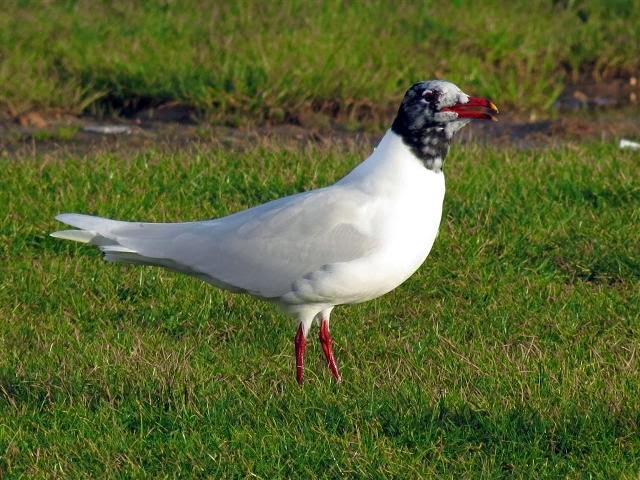 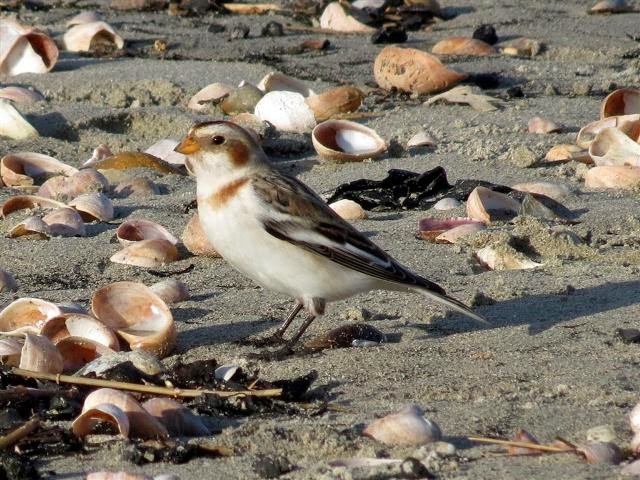 South Mundham Floods: No sign of the Whooper Swans today, but 20 Mute Swan, 16 Shelduck, 50+ Meadow Pipits, 2 Reed Buntings and 2 Stonechats present. (AH)
Pagham Lagoon: The Slavonian Grebe was still in residence, along with 8 Goldeneye (including 3 drakes), 3 Red-breasted Mergansers, 30+ Little Grebes and 120 Mediterranean Gulls. Also up to a dozen Linnets flitting about and singing along the gorse. (AH) 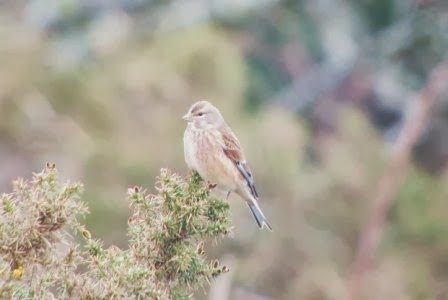 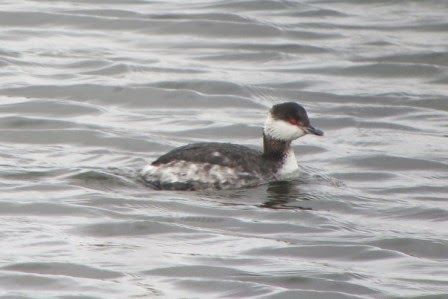 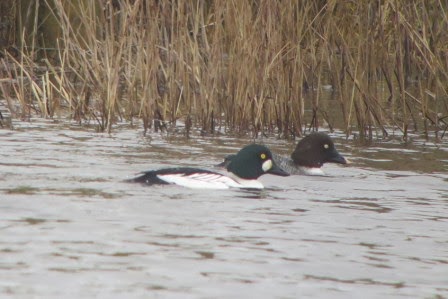 Pagham Harbour: There are still plenty of Brent Geese about, and there were about 20 Pintail amongst the Wigeon and a couple of hundred Golden Plover in with the Lapwings. There were also 8 Lesser Black-backed Gulls in the gull flock - the first I have seen in the harbour this winter. (AH) 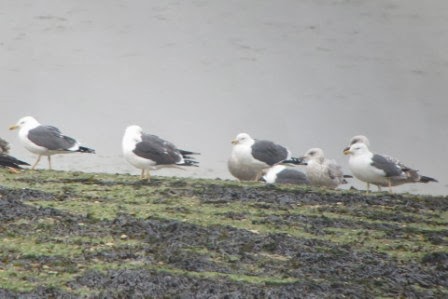 
North Wall: The flood waters have gone down considerably; I was able to do a circuit going up Pagham Rife but only with wellies.  Behind the Wall were 180 Curlew and I noted a further 140 along the Rife, my first count of over 300 this winter, also 700 Lapwing and 660 Brent Geese in muddy fields alongside the Rife. I only recorded 12 Black-tailed Godwits, 4 of which were beginning to show summer plumage. Otherwise it was very quiet, there was not a single bird on the Honer Reservoir. The Grey Herons are busy, and noisily, nest building in Owl Copse. A fly past by 3 Common Buzzards caused havoc amongst the Lapwings. (JW).

Went to Church Norton this afternoon where the highlights were an ad Little Gull feeding along the beach and 1 Firecrest at the bottom of the main path. Good numbers of waders present squeezing on to the rapidly sinking land - mostly Grey Plover, Knot and Dunlin but c40 Bar-wits on Tern Island itself. As the tide came in further c2500 Lapwing appeared from seemingly nowhere! Offshore, the only birds other than gulls were c.8 Common Scoter on the roiling sea. No sign of the Peregrine or the Glaucous reported yesterday. Twelve Ringed Plovers were in the field behind the churchyard with c200 Brents also (AB).