Monday, 17th February: Mainly dry and cloudy with a fresh southerly blowing. This was my first visit to the Bill since the big storm on Friday night, and although Sam Hill's update on Saturday morning (15th) had partly prepared me, I was truly shocked at the scale of the damage. Masses of shingle strewn into flooded gardens, fences smashed, walls collapsed, buildings damaged, windows smashed, even a couple of the 'green triangle' markers bent - and worst of all to us, the back wall of the 'gateway' in the Wall removed by the sea - now that will make the steps more uncomfortable during a sea watch. I cannot remember a worse storm at the Bill and don't recall even the famous 'Selsey hurricane' doing this much overall damage to the sea-front (OM). 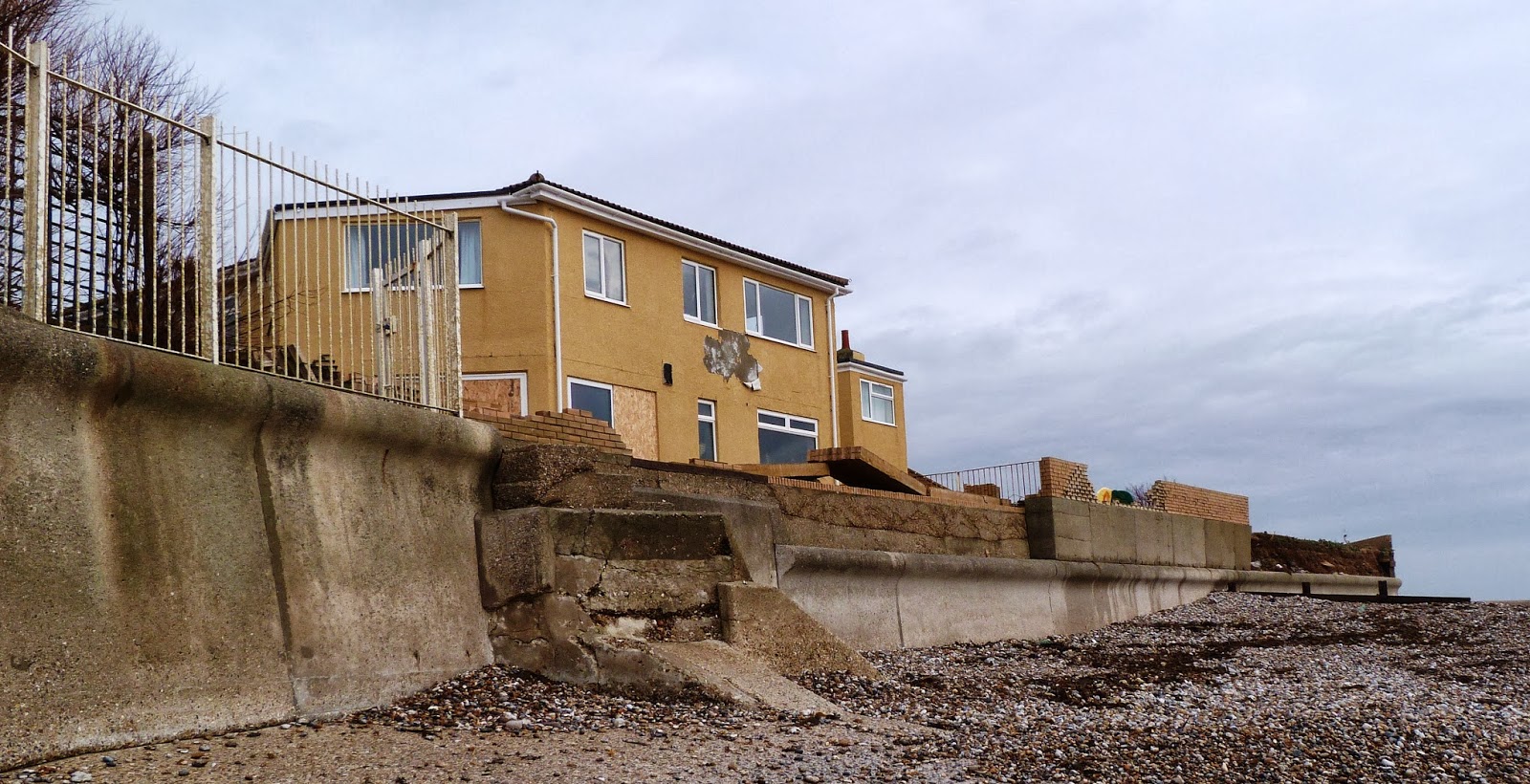 Collapsed walls, boarded up windows, and even the 'green triangles' couldn't stand it (OM). 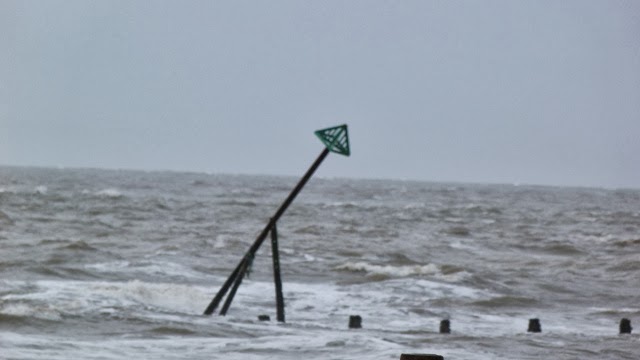 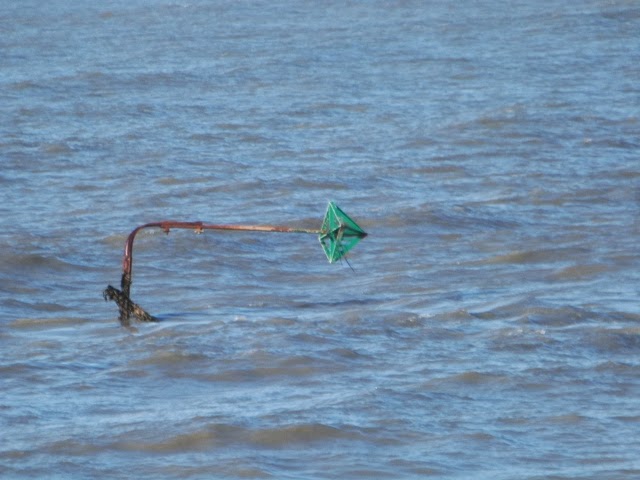 ....And another damaged triangle (S. Russell)
Selsey Bill: 0820-1120hrs: Overcast, wind S 4-5.  (Obs: OM/AH).
AH joined OM at the Bill this morning, but little was moving - 33 Brent Geese heading purposefully east and 9 Red-breasted Mergansers west with 5 offshore - though the main interest was the adult Little Gull and at least 6 Kittiwakes lingering along the strandline with the Black-headed Gull flock. It's not often we get to see Kitti's at such close quarters. Also 4 Common Scoter on the sea, a single auk sp W, and a Rock Pipit  still on the beach (OM/AH). 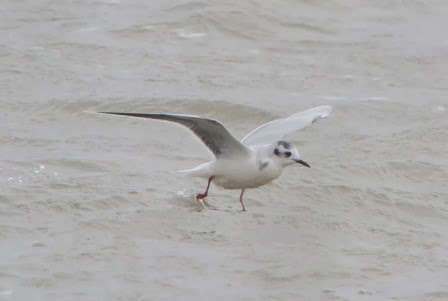 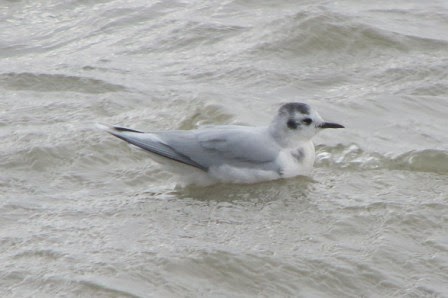 Little Gull (above) and Kittiwake off Selsey Bill (AH) 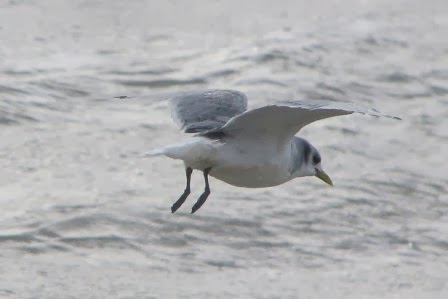 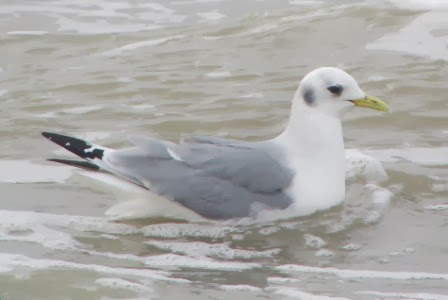 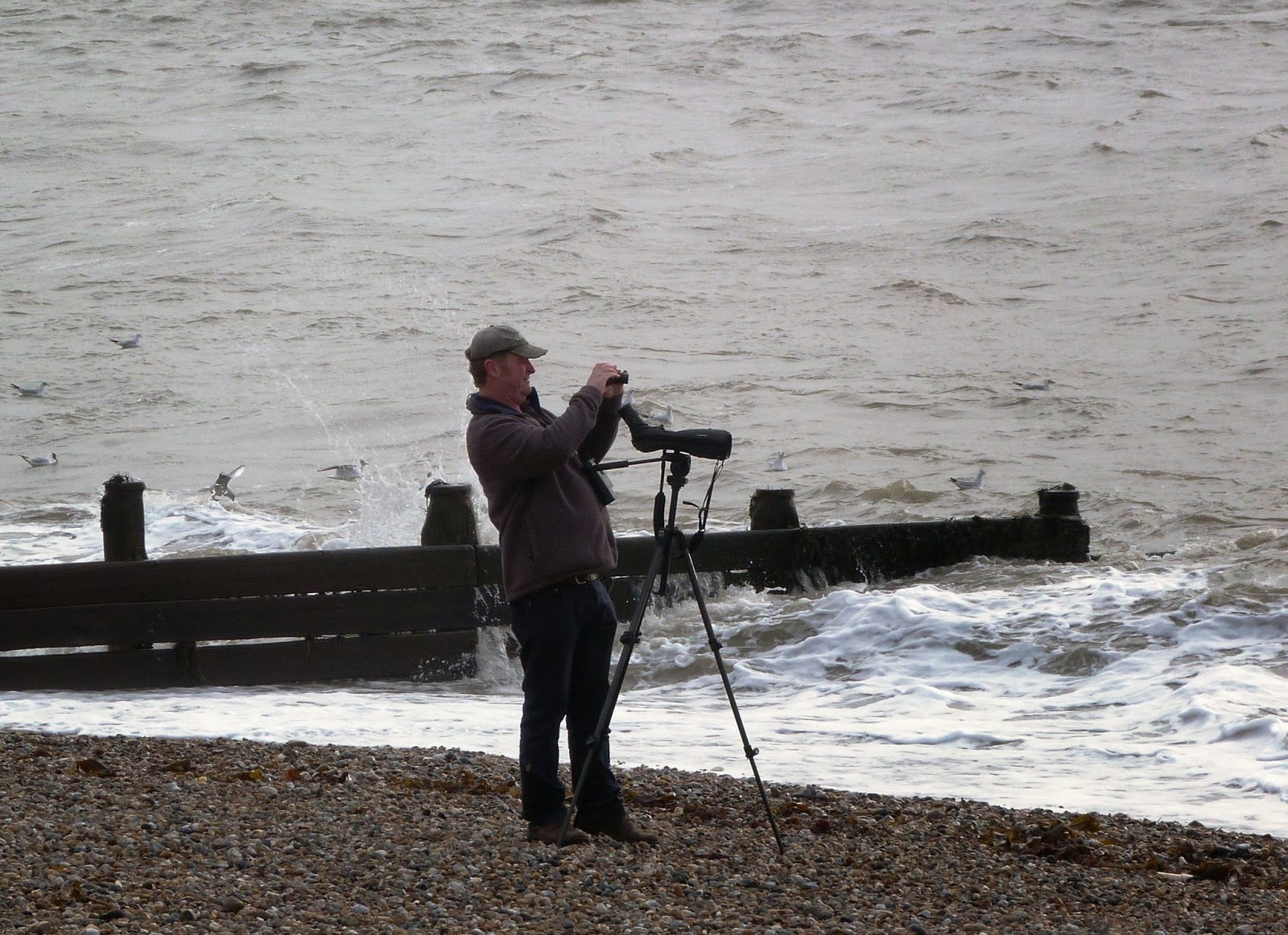 Andy House in action, repeatedly trying to get a shot of a Kittiwake! (OM). 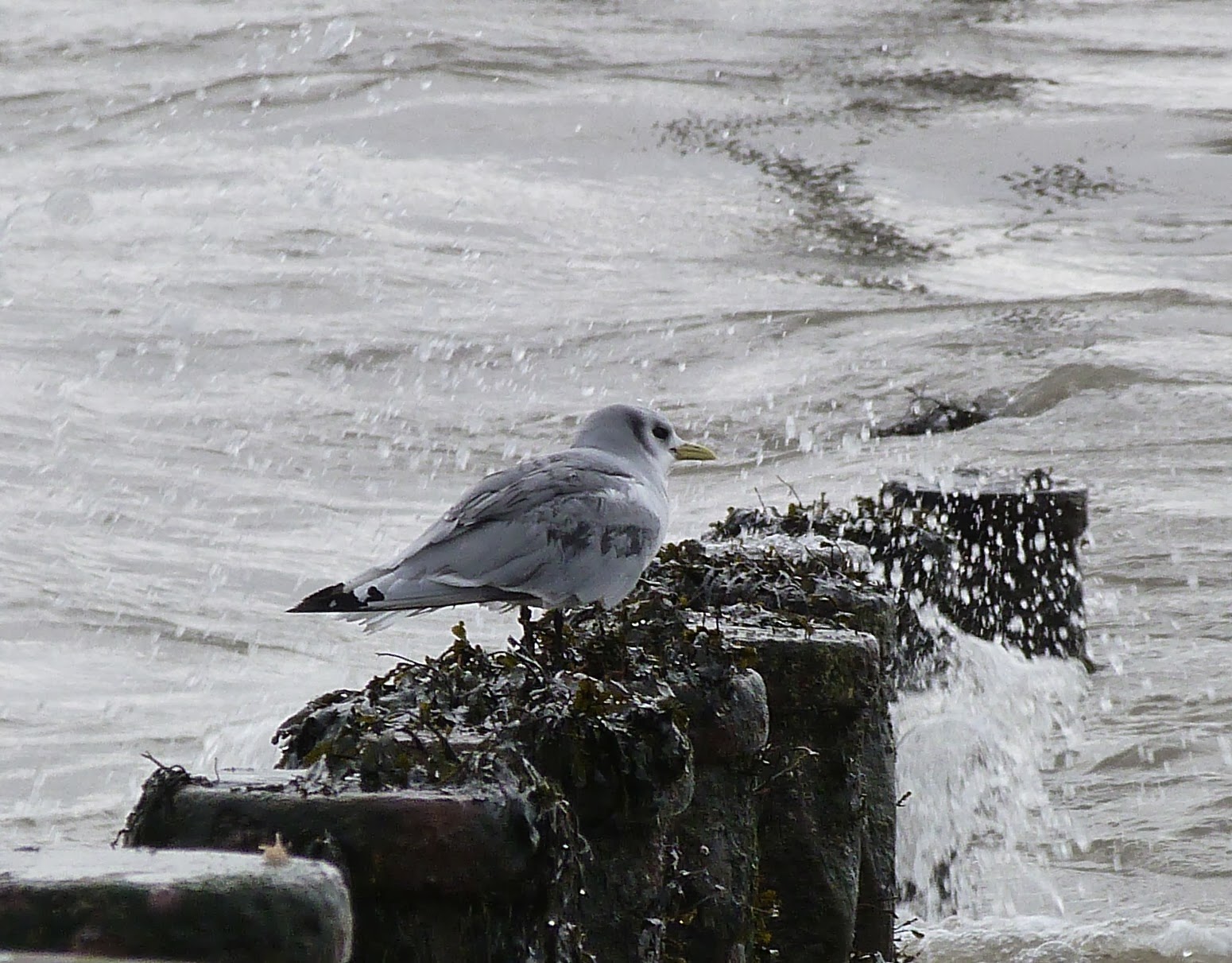 Kittiwakes at the Bill (OM) 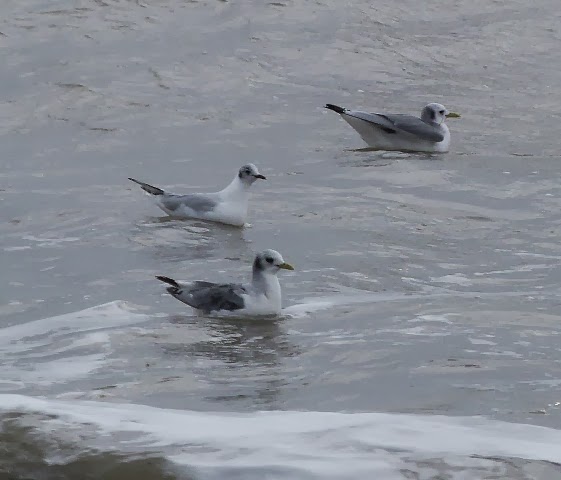 Pagham Harbour: Still quiet at Church Norton this morning - highlight was a line of seven Grey Herons sheltering from the wind in the horse's field. Also there was a flock of 40 Redshank feeding together in the harbour, and a big swirling mass of Black-tailed Godwit, Golden Plover & Lapwing up over the North Wall, though I couldn't find the cause. (AH)
An adult Glaucous Gull seen roosting on the top of New Island in Pagham Harbour this afternoon. A Water Rail was squealing deep in Reedy Marsh and ca.33 Snipe were also flushed in one flock from the harbour just beyond the end of the Long Pool. (Trevor Gibson-Poole per SOS)

Sunday, 16th February: At last, a very welcome dry, bright and sunny morning with hardly a cloud in the sky and only a light wind. A sunny Sunday after so many storms was just the sort of day for the world and his wife to be out and about, but also a great day to do long-overdue clear-up and garden jobs, so OM went for the latter option in order to cover the working week ahead.


A walk from Selsey-Church Norton this morning produced 57 species for SH/IP, including singles of Peregrine, Buzzard, Sparrowhawk and Kestrel, and 4 Yellowhammers at Park farm, beside a straw heap.


Pagham Hbr: A WeBS count on the North wall/ North Fields produced the following...
Mute Swan 15, Shelduck 28, Teal 87, Tufted 16, Shoveler 26, Wigeon 32 (where have they all gone?), Mallard 6, Lapwing 2100, Curlew 194, Golden Plover 86, Common Snipe 31 (in field north of the horse field at Welbourne), Black-tailed Godwit 160, Brent Geese 260, Coot 45, Moorhen 17, Little Grebe 1, Grey Heron 4 (nest material being taken to Owl Copse). Supporting cast 3 calling Cetti's Warblers and 2 Brown Hares. Nice to be out in sunshine for a change. (JW).
Ferry Pool: A huge flock of Brent Geese on the Ferry at lunchtime, circa 1500 birds, before they all took off to head back onto the arable fields. Also 35 Curlews there. (AH) 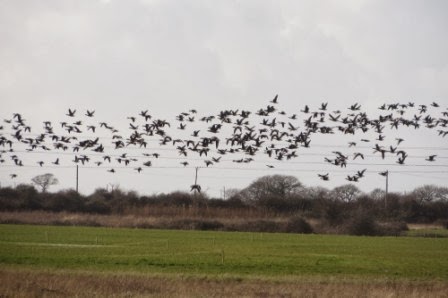 Medmerry: Highlights of a walk from Easton Lane, Earnley to the beach at Bracklesham this afternoon were an adult Little Gull, a Green Sandpiper, a Little Owl back at a formerly regular site, 35 Common Scoter heading east offshore, 7 Gadwall, 10 Tufted Duck, 20 Teal and Shelduck, 70 Stock Dove, a Stonechat and a Reed Bunting, 3 or 4 Skylarks and 3 Little Egrets. Also seen were a Fox and up to 20 Roe Deer, and sadly a dead Razorbill on the beach. (AH, S&SaH)
The Hill's also had another Little Owl fly across the road in Easton Lane on the way home. 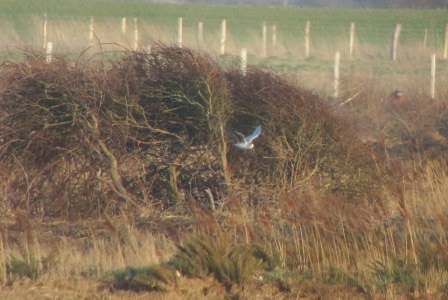 A rather distant Little Gull at Medmerry (AH


Sidlesham: A Raven flew south over my garden on the west of the village at 3.15pm (AH)
Posted by Birderowen at 13:33