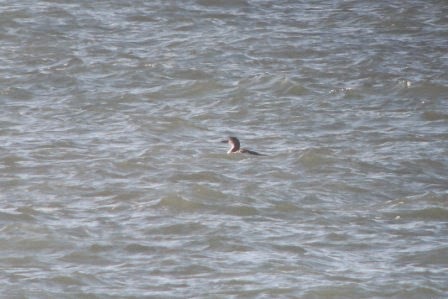 
Selsey Town: A Chiffchaff in the garden this afternoon. (S&SaH)

Church Norton: There was also a modest passage of Meadow Pipits over the beach this morning - at least 100 in off the sea in small flocks, and one of the Spoonbills flew into roost on Tern Island, a Red-breasted Merganser was in the harbour, with a further two and a Great Crested Grebe offshore, where otherwise it was quiet in the sharp wind. However, a Short-eared Owl flew west over the harbour, and other raptors were well represented with 3 Sparrowhawks, 3 Kestrels, 4 Buzzards and a Peregrine which flew to its island.(AH/SH/SaH/PB) 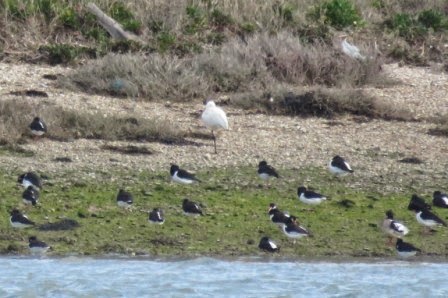 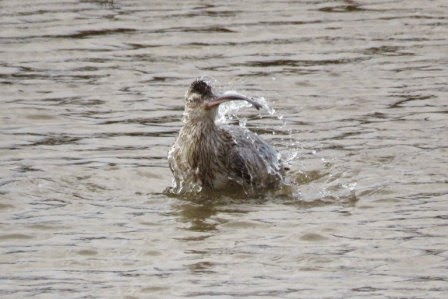 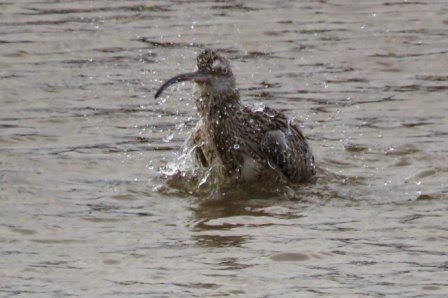 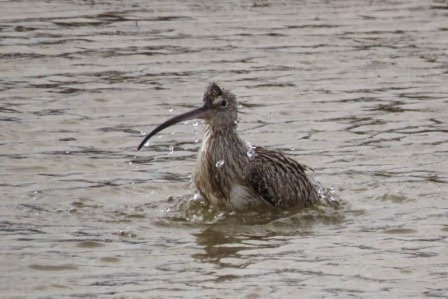 This afternoon a Short-eared Owl flew over the fields behind Park Farm before disappearing south towards Selsey, there were also two Lapwings out on the fields and in the field nearest to the sea were a pair of Grey Partridges. In five years this is only the second time I have seen this species on my regular walk from the village to Church Norton.
The Harbour was very full of water and there was no sign of this morning's Spoonbill, however a male Wheatear on the shingle spit opposite the metalwork was my first of the year. (IP) 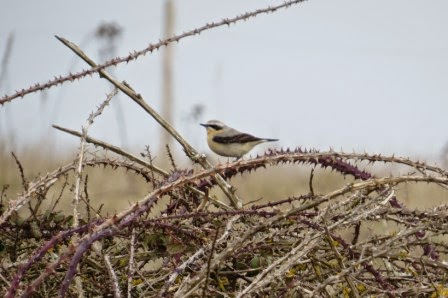 Ferry Pool: Fourteen Avocets were on the pool, and they, the dozen or so Redshank and the Lapwings were all displaying and competing around the water's edge. Otherwise, there was still a big flock of Wigeon on the field and the usual Shovelers and Shelduck. (AH) 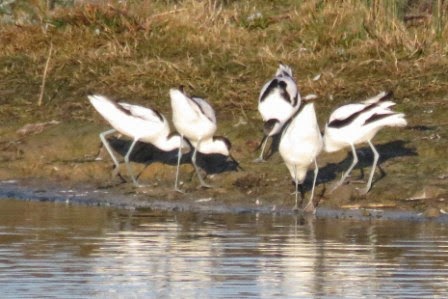 Avocets (above) & Shelduck at the Ferry (AH) 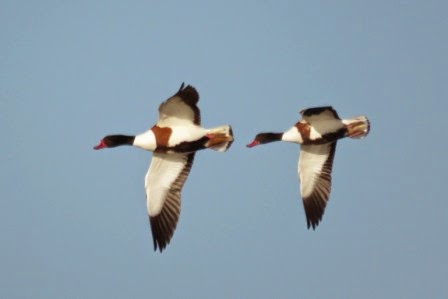 Chichester GPs: Drayton Pits - Bird of the morning here was a Red Kite which soared over, to the annoyance of the local gulls. The only obvious migrants located were 6 Chiffchaffs, but winter lingerers still present included 75 Shoveler, 38 Pochard, 64 Tufted Duck, 20 Gadwall and 5 Snipe. Also logged were 4 pairs of Great Crested Grebe,  a Kestrel, 2 Buzzards, 31 Canada Geese, 18 Greylags. a Bar-headed Goose and a couple of Reed Buntings (OM).
Westhampnett Pit held the usual Tufted Ducks, a pair of Great Crested Grebes, but no hirundines! (OM) 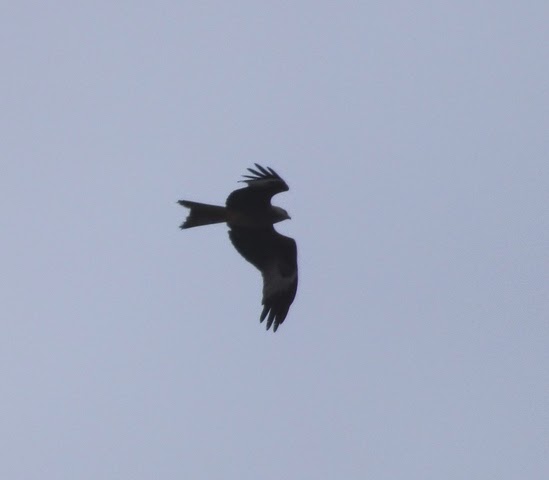 Red Kite over Chi GPs (Drayton) - and spookily just after I'd put down my scope to grab a photo, the sun must have peeped through the clouds to light it up, just as if it were filming me! 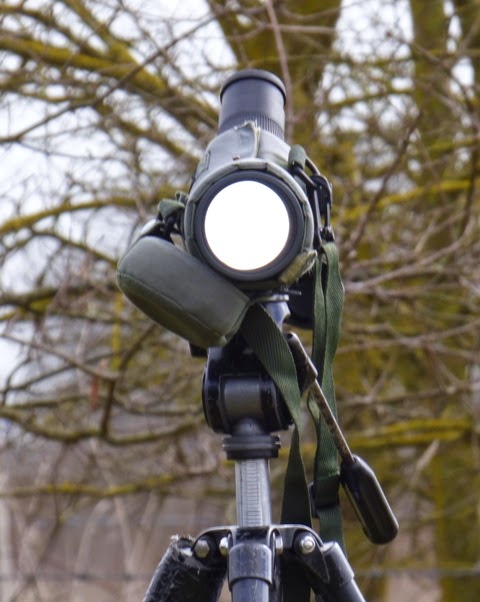 Medmerry: Easton Lane to Stilt pool - this afternoon there were 13 Yellowhammers, 7 Reed Buntings, a Skylark, 20+ Meadow Pipits, 6 Little Egrets, 2 Buzzards and 3 Kestrels along the path, and on the Stilt pool there were 7 Avocets, 12 Gadwall, 20+ Tufted Ducks, 20+ Linnets and 10 Pied Wagtails. (S&SaH)


Friday, 20th March: A dry but cloudy morning with a sunnier afternoon in prospect, and the cool NNE wind still persisting. Sadly the cloud  will probably mean anyone birding on our patch will miss the solar eclipse due at roughly 0930; never mind, it is the spring equinox today and also a perigee new moon (if like me you hadn't heard that word before, well it's basically when the moon at it closest to the earth so it looks bigger!) (OM)

Selsey Bill: Offshore, between 07.15 and 07.45hrs,  there were two Great Northern Divers, two Common Scoter, the Eider, six Brent Geese (which flew off east) and three Red-breasted Mergansers (which flew off west), and a Red-throated Diver also flew west, plus a Sanderling on the beach. (AH/GH). Later, from 0830 - 0930, the Great Northern Diver count had risen to three and the Merganser count to eight, plus a single Great Crested Grebe (JA). 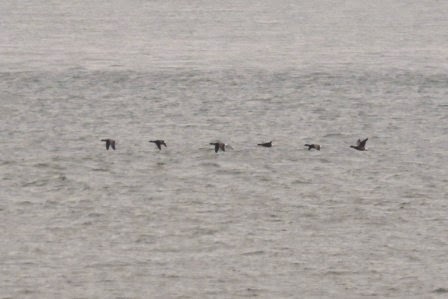 Brent Geese past the Bill (AH)

Selsey Town: A male Blackcap in the garden briefly this evening. (S&SaH)

Ferry Pool: There were eight Avocets this morning, along with 12 Redshank, 40 Lapwing, 70 Shoveler and at least 400 Wigeon. (AH) 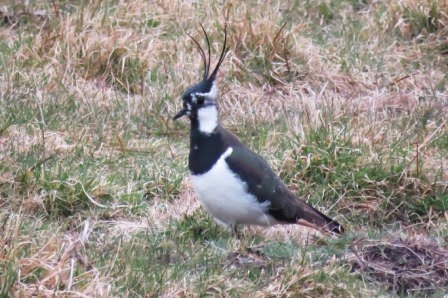 Medmerry: Easton Lane to the Stilt Pool - Amazingly, the solar eclipse was visible this morning - for barely a minute the clouds parted enough to see the crescent of the sun behind the moon before the clouds returned and it was all over for another ninety years! 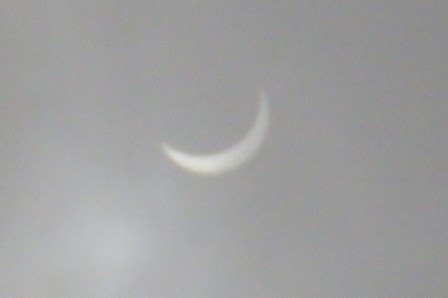 The solar eclipse, briefly viewed through a parting of the clouds at Medmerry (AH) 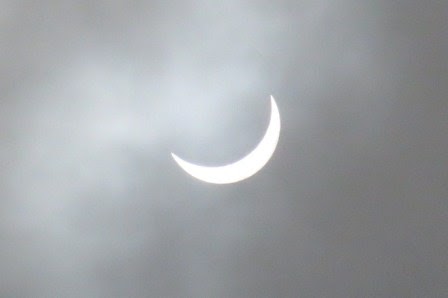 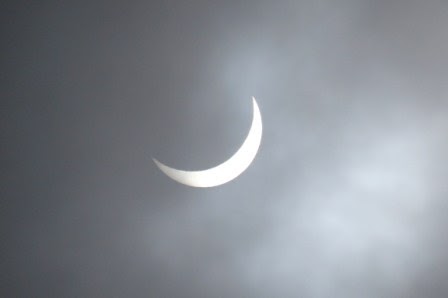 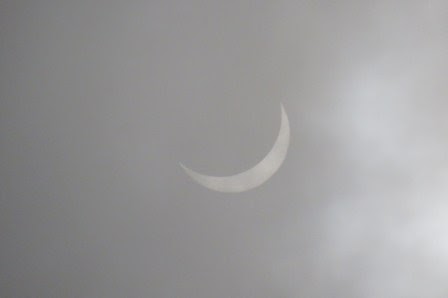 Most interesting thing bird-wise was a big gathering of Redwings in the poplars early on, that departed north in smaller groups, totalling around 50 birds. Other sightings included at least 10 Snipe around the area, two Spoonbills snoozing out on the reserve, six pairs of Avocets on the Stilt Pool, 40 Golden Plover which came up from the middle and a mobile flock of 30 Curlew. There were also a pair of Pintail, three Shoveler, c20 Gadwall and c100 Teal around the pools, about 30 Linnets were around the sea-defence rocks and Yellowhammers, Meadow Pipits and Skylarks were present all round the bank. (AH) Also there were two Great Crested Grebes offshore and ten Brent Geese went east. (BI) 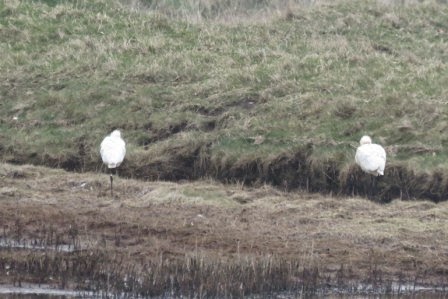 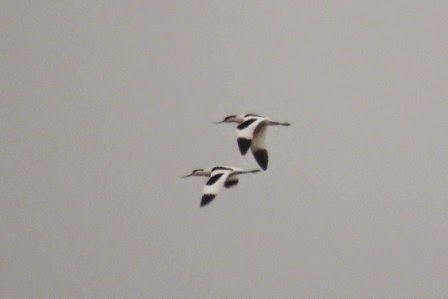 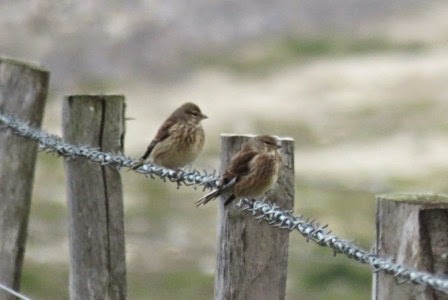 Chainbridge to Ham - One Short-eared Owl was out along the banks this evening, and a flock of c120 Golden Plovers (presumably the ones that have been on the Ferry) were on the newly ploughed field on the reserve. Very few passerines about - just a couple of Skylarks and about 30 Meadow Pipits which dropped into the field - though at least five Grey Herons were in the vicinity. (AH) 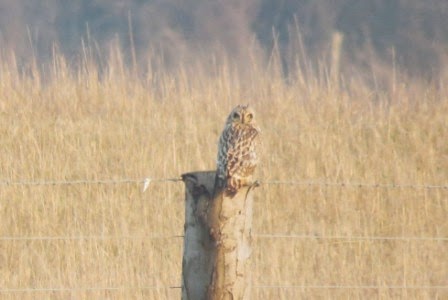 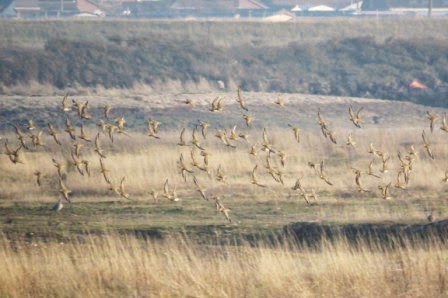 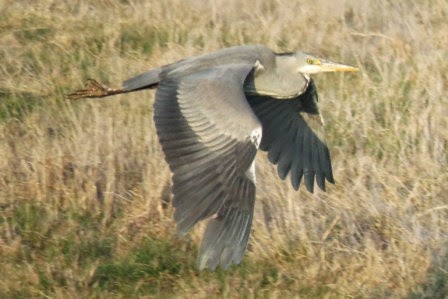 Thursday, 19th March: Mainly cloudy though dry, but with a fresh NE wind and the prospect of cooler temperatures again for the next few days...so it was back to gloves and full winter clothing again!

Pagham Spit/Lagoon: Best bird was a Merlin which shot up over Church Norton spit and disappeared at high speed across the harbour. Otherwise, there was a bright male Wheatear at the far end of the spit, and there were a dozen or more Linnets back in residence along the gorse. A Reed Bunting dropped in, and there were a few Skylarks and Meadow Pipits about, plus a single Chiffchaff. There was nothing other than the usual birds in the harbour. 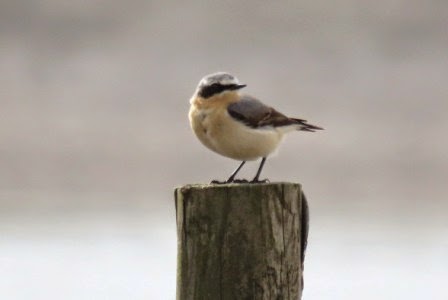 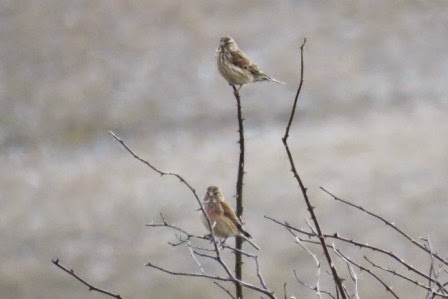 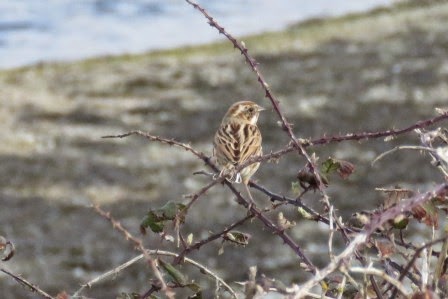 Not much of note on the Lagoon - there was a Pochard in with a dozen Tufted Ducks and similar of Little Grebes, whilst around 100 Brent Geese, 30 Wigeon and a few Teal dropped in and departed again. (AH) North Wall: Surprisingly, given the high tide, the only waders on the Breech Pool were about eight Snipe, in the company of a pair of Gadwall and c50 Teal. Brent Geese were coming and going all the time and there were a pair of Shoveler and eight Pintail in the harbour, but otherwise it was very quiet. (AH) 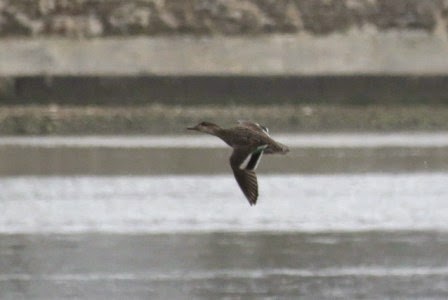 Teal from the North Wall (AH)

Ferry Pool: A Spoonbill went over the Visitor Centre at around 8am, heading for the harbour. (PH)
On the pool itself there were a total of 11 Avocets present this morning, along with a couple of Snipe and the usual Lapwings, Wigeon and Shoveler, plus 30 or so Shelduck. (AH) 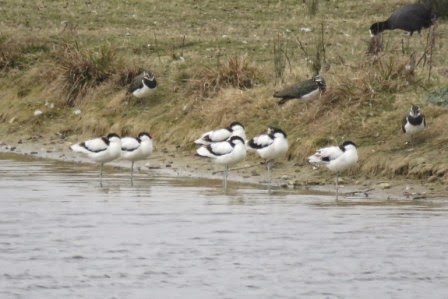 Avocets on the Ferry (AH)

Church Norton: The cold wind here made viewing conditions less than comfortable and we didn't linger too long, but there were 5 Slavonian and a couple of Great Crested Grebes offshore (OM/BFF).
Late this afternoon there was a Grey Wagtail at Park Farm reservoir, the elusive Grey Partridge was near by and a Cetti's Warbler was calling from the Second Several. Best bird was a single Fieldfare at the northern end of Selsey.(S&SaH)

Chichester Marina: A fairly brief late-morning visit; little on the marsh except 20 Curlew, 2 Snipe, several Teal and a Buzzard, though from the reed-bed a Cetti's Warbler was singing occasionally and 3 Water Rails squealed at each other in competition. Fifty or so Brent Geese were in the channel on the high tide with a selection of common waders and wildfowl in small numbers (OM/BFF).

Birdham Pool: A quick look for yesterday's Mandarins drew a blank and there was little on offer except for 4 Little Grebes and 6 Cormorants. (OM/BFF).

Fishbourne Creek: At least 25 Yellowhammers were feeding on and around the dung heap in the horse paddock. In the creek there were still plenty of birds, although numbers are dropping; there was nothing special but totals included 25 Pintail, 200+ Common Gulls, 60 Black-tailed Godwits and 2 Greenshank (OM/BFF).

Medmerry: Breach viewpoint - The lagoons were nearly empty of birdlife, though c.200 Brent Geese were spread out across the area beyond. The sea held what interest there was, with three Great Northern Divers, three Red-breasted Mergansers and an Eider (possibly the Selsey regular?) offshore (OM/BFF).