Church Norton: There were six Bar–tailed Godwit in the harbour, 6 Slavonian Grebes offshore, a Sandwich Tern went east offshore, five Meadow Pipits went over north and a Buzzard was along the west side. (CRJ) Also, there were 20 Avocets in the harbour. (A&YF)

Fishbourne Creek: There were a total of 24 Red-Breasted Mergansers off Dell Quay, but not a single Goldeneye - they always seem to slip away unnoticed at this time of year. Among the roosting waders there were a Greenshank, two Spotted Redshank, the Whimbrel in its usual haunt and c150 Black-tailed Godwits, and along the edge were a Stonechat and a couple of skittish Rock Pipits. There were still plenty of Wigeon around, plus a huge flock - c1500 - of Brent Geese on the water towards the Marina, whilst the Yellowhammer flock near the riding stables numbered between 30 and 40 birds, mostly feeding on the adjacent arable field. (AH)  We called in early afternoon, on our way back after a trip to Hants, and in the wet field south of the R. Lavant a Black Brant was consorting with the  Brents. In the creek were 42 Pintail and 13 Gadwall. (BFF/DM). 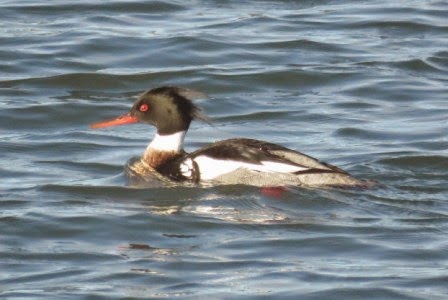 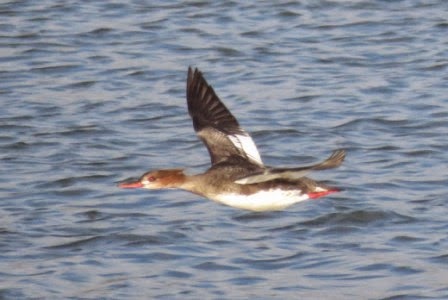 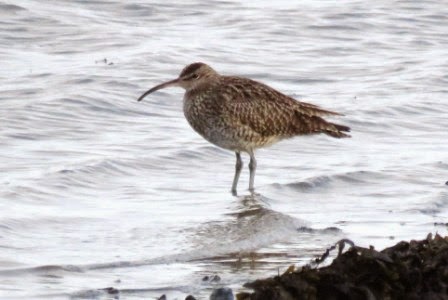 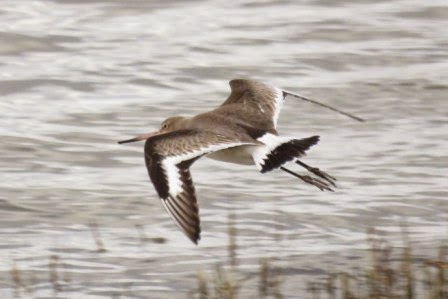 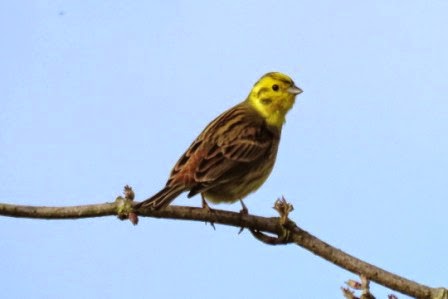 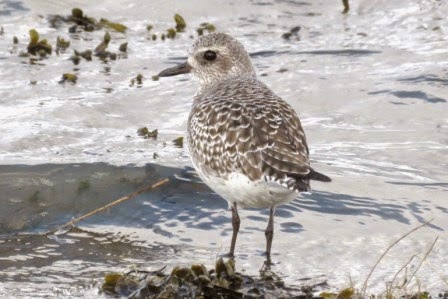 Ferry Pool: Still two Avocets and c200 Black-tailed Godwits on the field, but barely 50 Lapwing and 30 Brent Geese this morning. (AH) Also, there was a singing Chiffchaff along the path towards the sewage farm. (A&YF)

Long Pool/Ferry Channel: Still 30-40 Avocets, which briefly came into view, at the end of the channel, and 50+ Teal were within it, but otherwise quiet on the high tide. Half a dozen Reed Buntings were along the Long Pool, the two Great Crested Grebes were still present upon it and there were a few singing Skylarks over the west side. (AH) 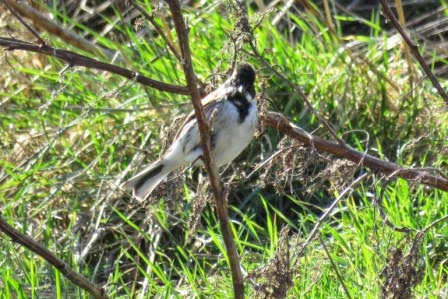 Reed Bunting (above) & Mallard from the Long Pool (AH) 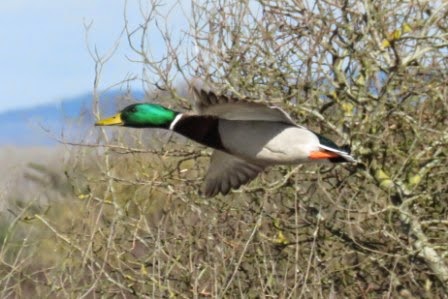 Monday, 2nd March: Another cold and bright, but very windy day, with a gusty westerly making it feel chilly .... which was one reason I managed to put in a 4-hr shift at the Bill, staying in the sun whilst sheltering from the blasting wind! (OM).
Selsey Town: Three Spoonbills were seen heading east over the East Beach Pond area this morning at around 8,30am. (Presumably they had emanated from Medmerry and were the same three seen later at Church Norton - see below.) (GH) 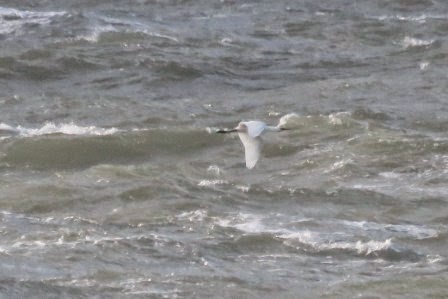 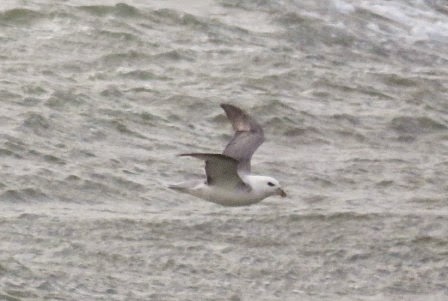 Church Norton: Three Spoonbills were seen coming in to land in the harbour from the west this morning (see above). (A&YF)
Two Slavonian Grebes and two Great Crested Grebes were offshore and a single Red-breasted Merganser was in the harbour, along with 500+ Brent Geese, 200 Wigeon and 50 Teal, plus the usual waders. (AH) 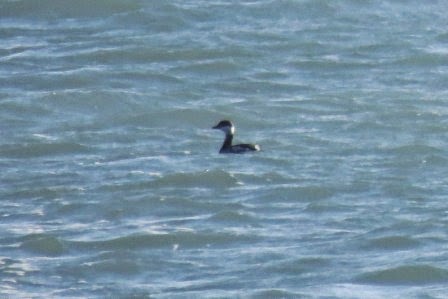 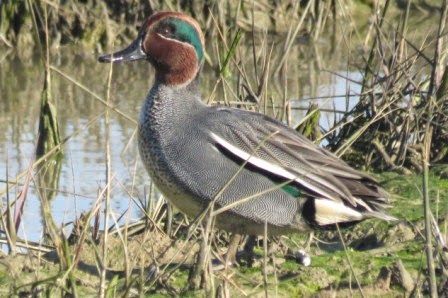 Ferry Pool: There were still in excess of 200 Black-tailed Godwits on the fields this morning, and a dozen Curlew, though barely 100 Lapwings. A pair of Gadwall were amongst the many Shoveler and Wigeon and the two Avocets were still present. (AH) 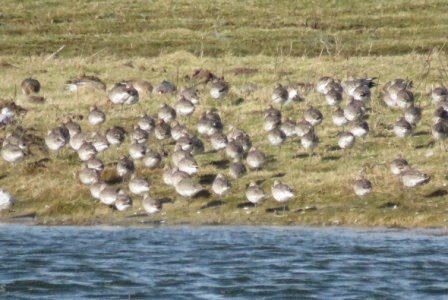 Black-tailed Godwits on the Ferry (AH)

Long Pool/Ferry Channel: There were still at least 40 Avocets at the far end of the channel, and a Spotted Redshank flew towards the Ferry. A pair of Great Crested Grebes were on the Long Pool and there were half a dozen Reed Buntings and Skylarks in the viicinity. (AH) 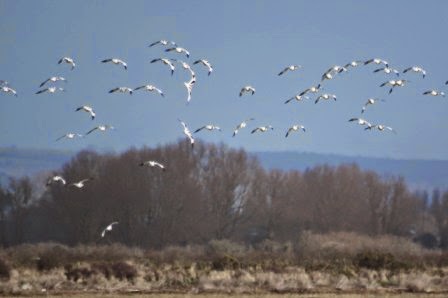 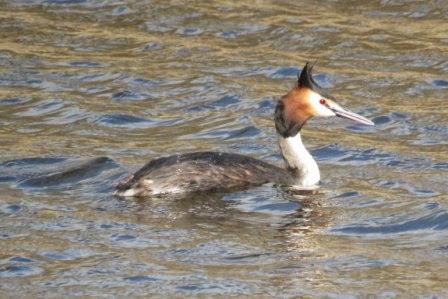 North Wall: A bracing morning along the Wall this morning. Very few ducks on the Breach Pool, but there was a steady procession of Brent Geese coming in for a wash and brush up before settling in Honer 3 field. Small parties of Curlews were at several locations totalling 170 in all, with a few Black-tailed Godwits amongst them. There were seven Pintail at the Owl Copse end of the Wall and a pair of Little Grebes were whinnying at that location. A Weasel was along the lower wall path. (JDW) 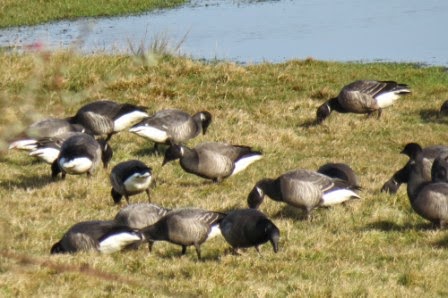 Brent Geese (above) & Curlews from the North Wall (JDW) 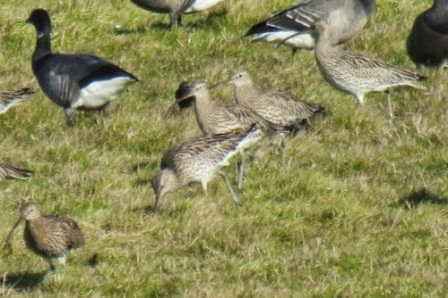 Chichester Marina: Quiet again today with that end-of-winter feel; the marsh held just 50 Curlew, a dozen Brent Geese and a calling Water Rail, whilst the usual 10 or so Tufted Ducks were on the old canal. In and around the channel there were 6 Red-breasted Mergansers, a couple of Great Crested Grebes, perhaps 10 Little Grebes, 100 Brent Geese, 50+ Dunlin, 30 Shelduck and another 50 Curlew (OM). 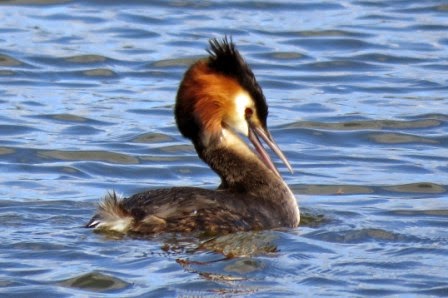 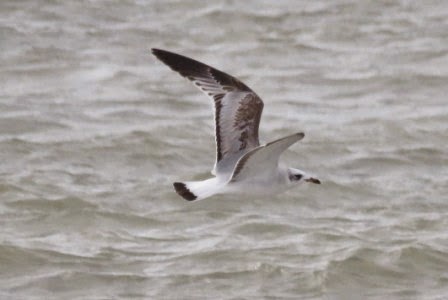 Church Norton: A Spoonbill was in the harbour again this morning, and there was also a Short-eared Owl present. (A&YF/RJS)
There were also two Red-breasted Mergansers offshore, four Bar-tailed Godwits flew into the harbour and a Water Rail flew over low and dropped into the first Several. Also the Green Sandpiper and two Chiffchaffs were at Park Farm, Selsey. (S&SaH)


Ferry Pool: Around 200 Black-tailed Godwits were on the pool this morning, along with the pair of Avocets, but there were only 2-300 Lapwing present. At least 500 Brent Geese and Wigeon were on the fields, and about 60 Shovelers and six Tufted Duck were on the water. (AH) 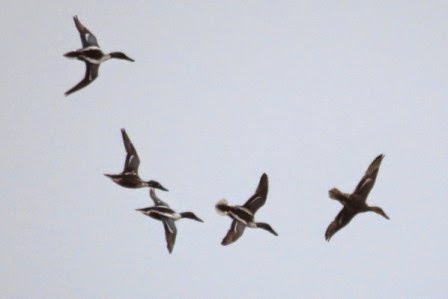 Shoveler over the Ferry (AH)


Pagham Lagoon/Spit: There was just one Goldeneye on the Lagoon this morning, along with four Pochard, 20+ Tufted Duck, 100+ Wigeon and 80 Brent Goose, and there were a handful of Mediterranean and Common Gulls present, too. Also a Stonechat was in the gorse.


It was very quiet on the spit - with just a few Skylarks and Greenfinches being present, and not much in the harbour beyond the regular species. (AH) 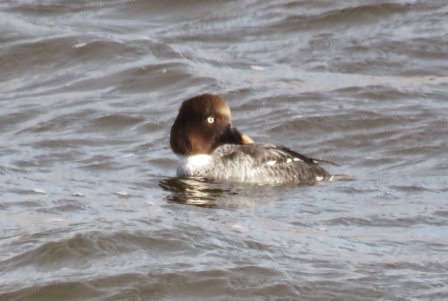 Goldeneye (above), Stonechat, and a selection of Gulls - Black-headed, Common, Herring and Mediterranean - on the Lagoon (AH) 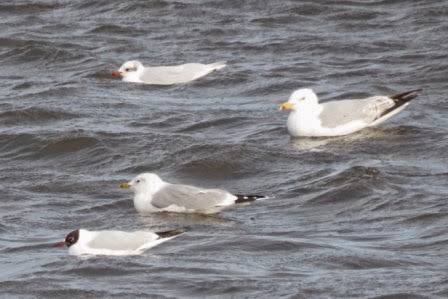 North Wall: The west wind had emptied White's Creek of birds - with just a handful of Black-tailed Godwits and Redshank being the only waders present.


The Breach Pool was not much better - with just 75 Wigeon and  25 Teal on the water, plus 200 on the grass, a Snipe which flew into the harbour and a calling Cetti's Warbler, though there was a constant movement of Brent Geese heading inland. (AH) 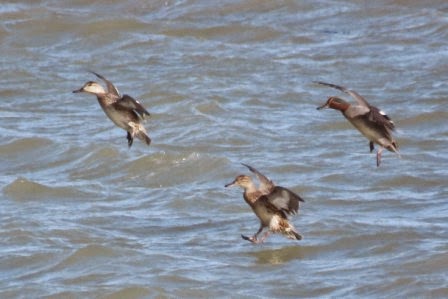 Teal (above), Wigeon & Brent Geese from the North Wall (AH) 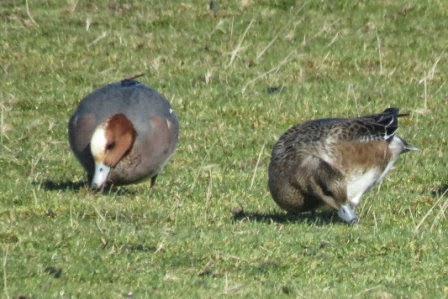 'South Mundham Flood:' First time I have visited this site (just north of Sefter Farm) this winter, and there wasn't much of a flood, or many birds, though half a dozen Shelduck were on what little water there was, and a Grey Wagtail, a dozen Meadow Pipits and 40+ Skylark were also present. (AH) 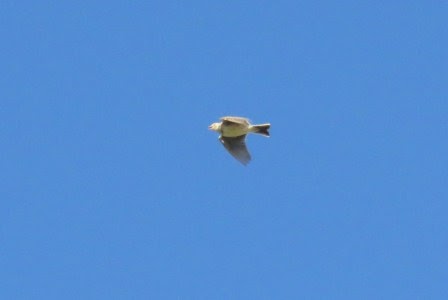 
Medmerry: Easton Lane west - There were four Spoonbills present on the reserve this morning. (A&YF/RJS)


There were still two this afternoon, on the Stilt Pool, along with a single Dunlin, four Gadwall, 30 Teal and 60 Wigeon. here were four Sanderling on the beach, and three Green Sandpipers shot noisily out of the creek opposite the flint barn, but the only other wader seen was a single Curlew. there were three Stonechats together by the flint barn, but passerines were scarce in the strong wind, with just a few Skylarks and Meadow Pipits noted. (AH) 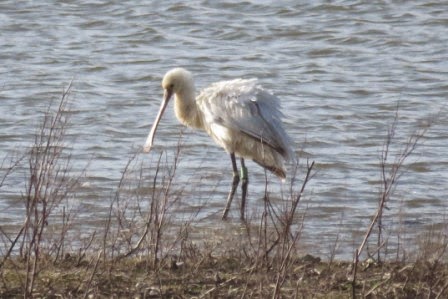 Spoonbill (above) & Stonechat at Medmerry (AH) 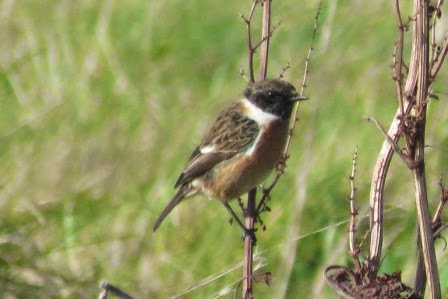