Tuesday, 24th March: Cloudy and  cool after a little overnight rain, with some sunny periods and the probability of showers later. The wind remains a moderate north-westerly - never very promising for sea passage on the south coast - but yesterday delivered far more than anticipated, so we will see what today brings..... 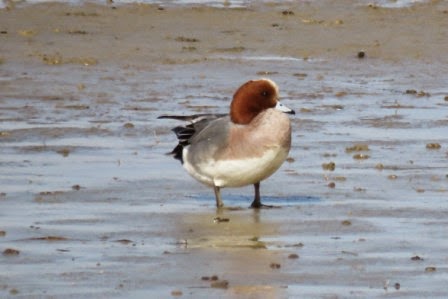 Wigeon on the Ferry (AH)

Long Pool: A Spotted Redshank and six Avocets were at the far end of Ferry Channel, and there were at least a dozen Chiffchaffs along the hedges, plus a few Linnets and Reed Buntings. (AH) 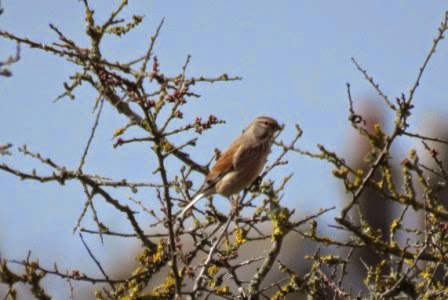 Linnet along the Long Pool (AH)

North Wall: Along White's Creek were 140 Black-tailed Godwits, the ever present Spotted Redshank and 38 Wigeon. The thrashings of a stranded Carp attracted a Great Black-backed Gull to the Breech Pool. The Gull tried to drag the struggling fish to the bank but dropped it in deeper water and, inadvertently, possibly saved its life.
Very little along the Wall or back fields but there were several singing Chiffchaffs. The fields behind Honer were being ploughed and had attracted many gulls - there were probably close to 600 and the vast majority were Black-headed but there were at least 8 Mediterranean Gulls amongst them. (JDW) 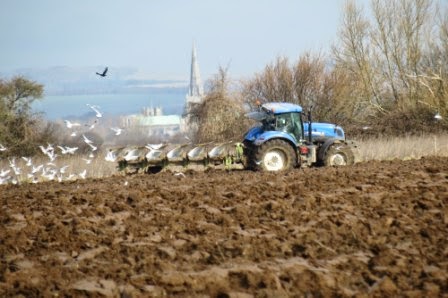 
Medmerry: Chainbridge-Ham - There were up to four singing Corn Buntings in the rough ground between Ham and the Breach, and numerous Skylarks displaying overhead. The odd Reed Bunting and Meadow Pipit was about, but the only evidence of migration was half a dozen scattered Chiffchaffs. On the reserve the flock of c120 Golden Plovers were on the ploughed field, at least a dozen pairs of Lapwing were displaying right across the area, and three Mediterranean Gulls were among the Black-headed Gulls. (AH)
Early afternoon a Marsh Harrier went over the bank near Ham. (PH) 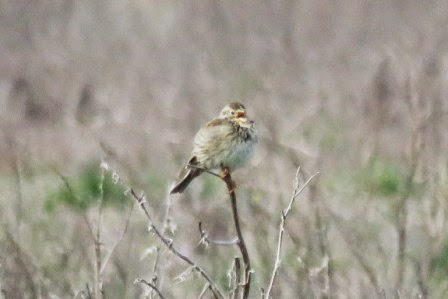 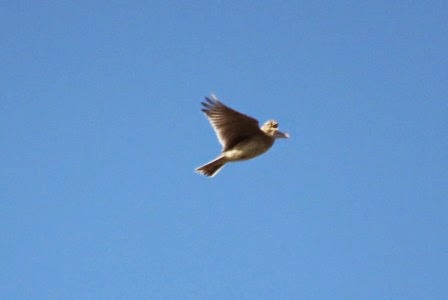 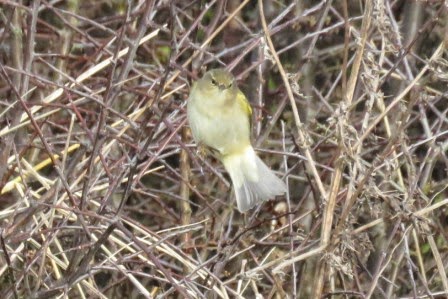 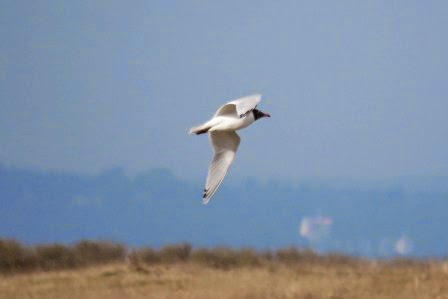 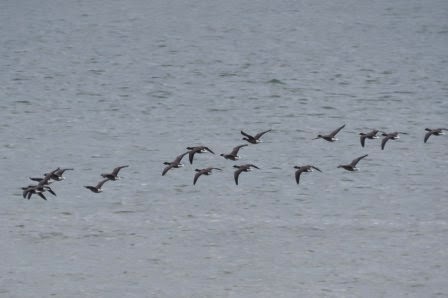 Brent Geese (above) & Red-breasted Mergansers past the Bill (AH) 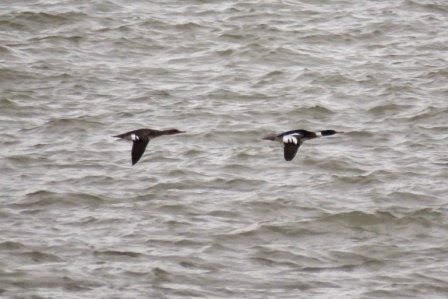 Wrong way fellas...turn around when possible! These two Brent spoiled the Log by insisting on going west when all the others knew better and headed east (OM) 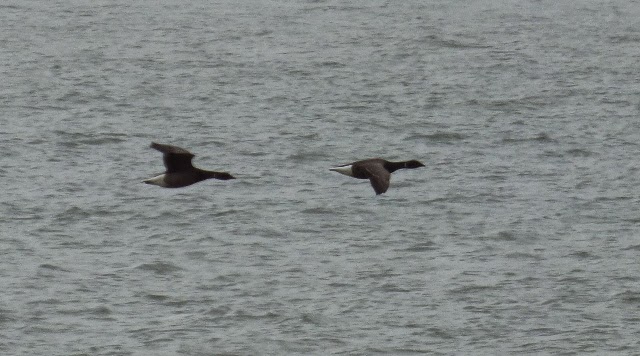 Selsey (West): The regular sites held nothing of note, the lowly best being at Northcommon Farm where there were 2 Goldcrests, 2 Chiffchaffs and a Great Spotted Woodpecker (OM).


Medmerry: Breach: Nothing really doing this morning - a pair of Pintail on the pools, along with 20 Shelduck, six Grey Plover and two Curlew was about it, and just a handful of Linnets and Meadow Pipits on the banks. (AH) 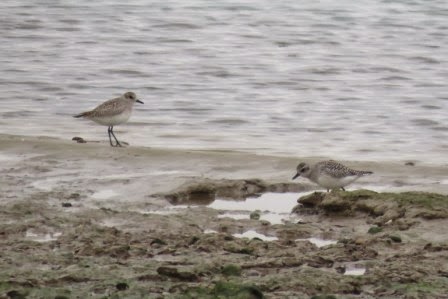 
Easton Lane / Stilt pool: I took a walk along the beach from the Earnley end in search of Wheatears but had no luck.  Three Spoonbills were feeding in the pools, one was bare legged, one had a green ring and the third seemed to be sporting a bright green flag with a paler green ring above.  Possibly a new bird?  Also  Peregrine, a Buzzard, a flock of c250 Golden Plover, displaying Lapwings, 2 Pintail ducks, 100 Brent Geese, 23 Yellowhammers and small flocks of Linnets and Skylarks. The stilt pool held very little; 4 Avocets, 4 Gadwall, a handful of Tufted Ducks, Teal and Wigeon (SR).

Church Norton: Very quiet - c80 Brent Geese were still in the harbour, as were c30 Black-tailed Godwits, eight Red-breasted Mergansers and a Great Crested Grebe were offshore and a couple of Meadow Pipits and Reed Buntings were around the horse field. (AH) 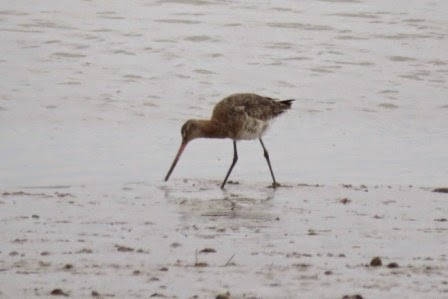 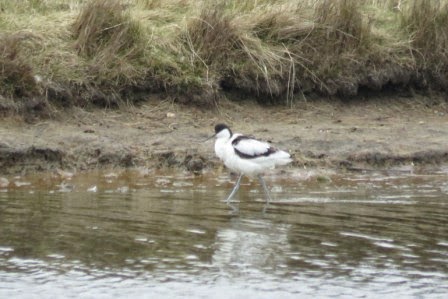 Avocet on the Ferry (AH)
Sidlesham: Twenty or so Fieldfare briefly appeared in the trees at the back of our garden late this morning, apparently disturbed from the recently drilled field behind, and a pair of noisy Mediterranean Gulls went over. (AH)

Chichester Marina: Just a brief look at the marsh, where a Sparrowhawk flushed 15 Snipe and 6 Teal, plus 6 Lapwings that had been displaying and looking settled. Two rival Cetti's Warblers gave occasional bursts of song from the reed-bed area (OM).
Sunday, 22nd March: Another cold day, with the sharp NNE wind persisting and only occasional sunny intervals....
however, both AH and I were originally harbouring plans to head east this morning, but as Chris Seaton so ably put it in his message to me.."The premature demise of the Newhaven Richard's Pipit yesterday rather changed my plans for this morning!" Ditto Chris! (In case you didn't know a Sparrowhawk snaffled it yesterday afternoon) (OM). 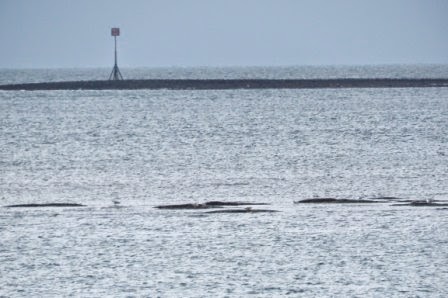 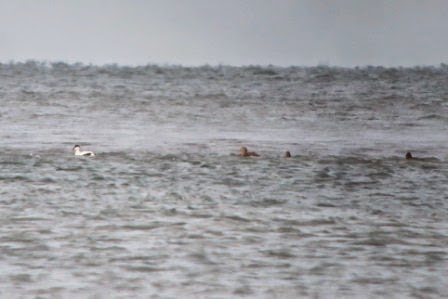 Eiders (above) & Red-breasted Merganser off the Bill (AH) 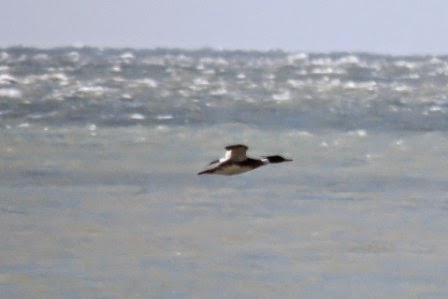 Selsey (West): Little indeed in a search for migrants at the regular sites; the only birds worth a mention were several Chiffchaffs at Northcommon Farm and a pair of Red-legged Partridges at Warner Lane paddocks (OM). 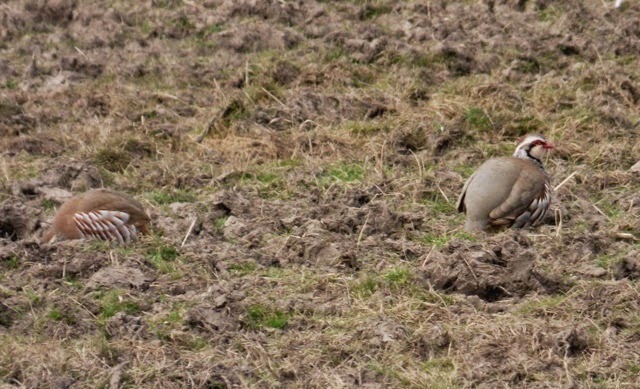 
Church Norton: The 2 Grey Partridge were in field behind new orchard, there were plenty of raptors about again, including 7 Buzzards, 3 Kestrels and 2 Sparrowhawks, there were 4 Red-breasted Mergansers and 3 Great Crested Grebes offshore and 21 Black-tailed Godwits in the harbour. (S&SaH/IP) Also a single Slavonian Grebe offshore (PJ/BJ). 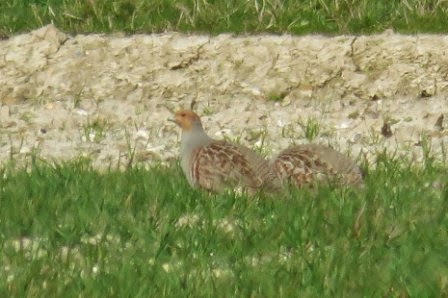 Ferry Pool: Only new birds here were a couple of Snipe and a pair of Mediterranean Gulls in amongst several hundred Black-headed Gulls. There were also four Black-tailed Godwits, ten Avocets and the usual counts of Shoveler, Wigeon and Lapwing. (AH/PJ) Also, a Raven went over at midday. (RJS) 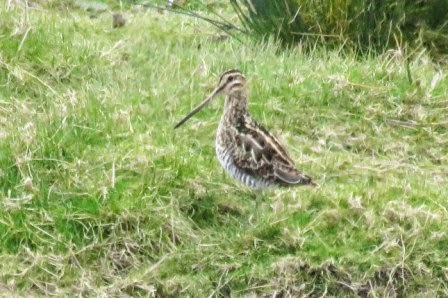 Snipe (above) & Mediterranean Gulls on the Ferry (AH) 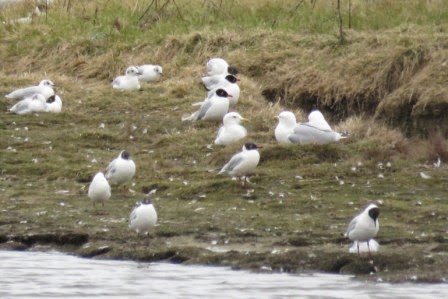 North Wall: A very parky North Wall held few migrants, with a few Chiffchaffs calling more than they were singing.  Highlights was the splendid Spotted Redshank on White's Creek and a nice surprise was a Jack Snipe rising from the reeds towards Owl Copse, flying low over the wall close to me and dropping into the harbour (CS).

Pagham Spit: It was pretty quiet today, with just a flock of Linnets on the shingle of note, though there were two Pintail in the harbour. (BI)


Medmerry: Porthole Farm to Easton Lane - Most of the interest was around Porthole Farm, with at least 30 Reed Buntings and a dozen Chiffchaffs along the hedges, plus a calling Cetti's Warbler, and there were 100+ Meadow Pipits and a few Skylarks in the fields. There were also a dozen or more Stock Doves about and three Buzzards over, but not a single Pied Wagtail around the settling tanks. The walk to Easton Lane and back was more or less birdless, bar a few more Meadow Pipits and Stock Doves. (AH) 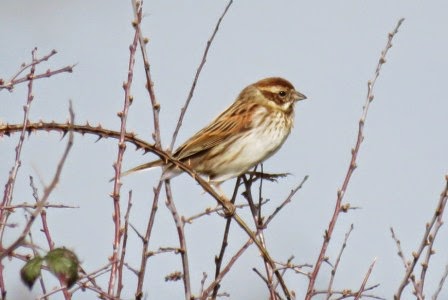 Reed Bunting (above), Chiffchaff, Meadow Pipit and a huge hatch of flies at Porthole Farm (AH) 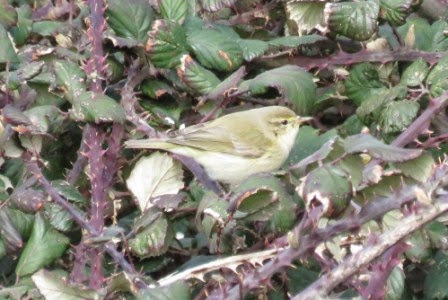 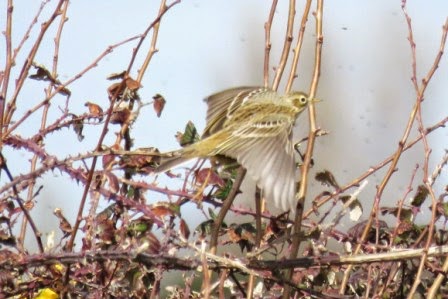 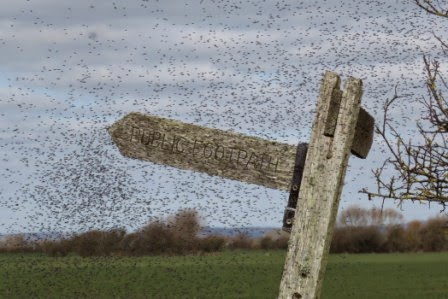 Easton lane to the Stilt pools - A Grey Heron, a Little Egret, two Shelduck and a few Teal around the first sluice pool, along with a few Reed Buntings. Two Buzzards went over, but not much on the way down except a Meadow Pipit and a Curlew, whilst a Snipe flew over. At the pools there were four Avocets, a large flock of Linnets and Goldfinches and there were at least 25 Pied Wagtails here, along with eight Tufted Ducks and two Mute Swans.
In the middle of the reserve there were several Oystercatchers, two more Avocets and a few Lapwings, whilst a few Reed Buntings and Skylarks were along the fence-lines. Also, there were four Teal offshore. (BI) 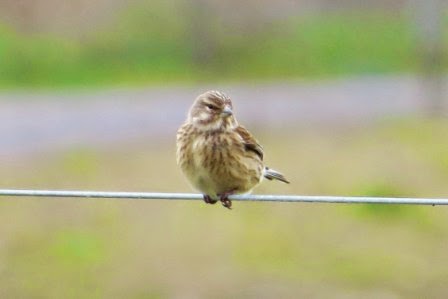 Linnet at Medmerry (BI)
Ham-Chainbridge - A Short-eared Owl came up over the bank by Ham Farm and kept on going, gaining in height as it disappeared beyond the sewage farm. Not much else of note, though there were plenty of displaying Lapwings, a few Curlew and Teal on the reserve and about 20 scattered Stock Doves. (AH) 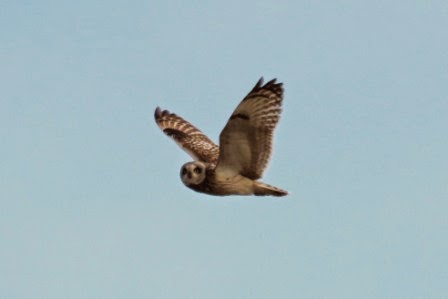 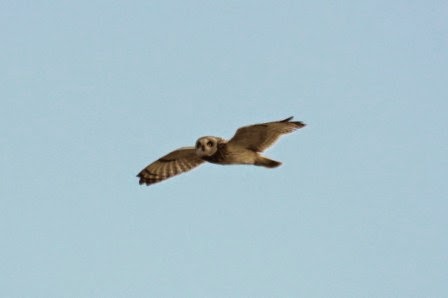 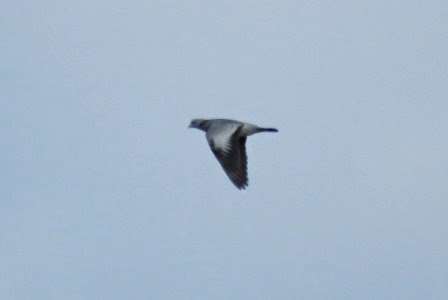 Chichester Marina: A Green Sandpiper was on the marsh this morning, with 2 Snipe, 45 Curlew, 4 Teal and pair of Gadwall. A Cetti's Warbler and a Water Rail were calling from the reed-bed, where a pair of Mediterranean Gulls flew over calling (OM).

Birdham Pool: No sign again of the Mandarins in a short visit, but a pair of Shelduck and a Great Crested Grebe were new, whilst regular birds included a dozen roosting Cormorants and 4 Little Grebes (OM). 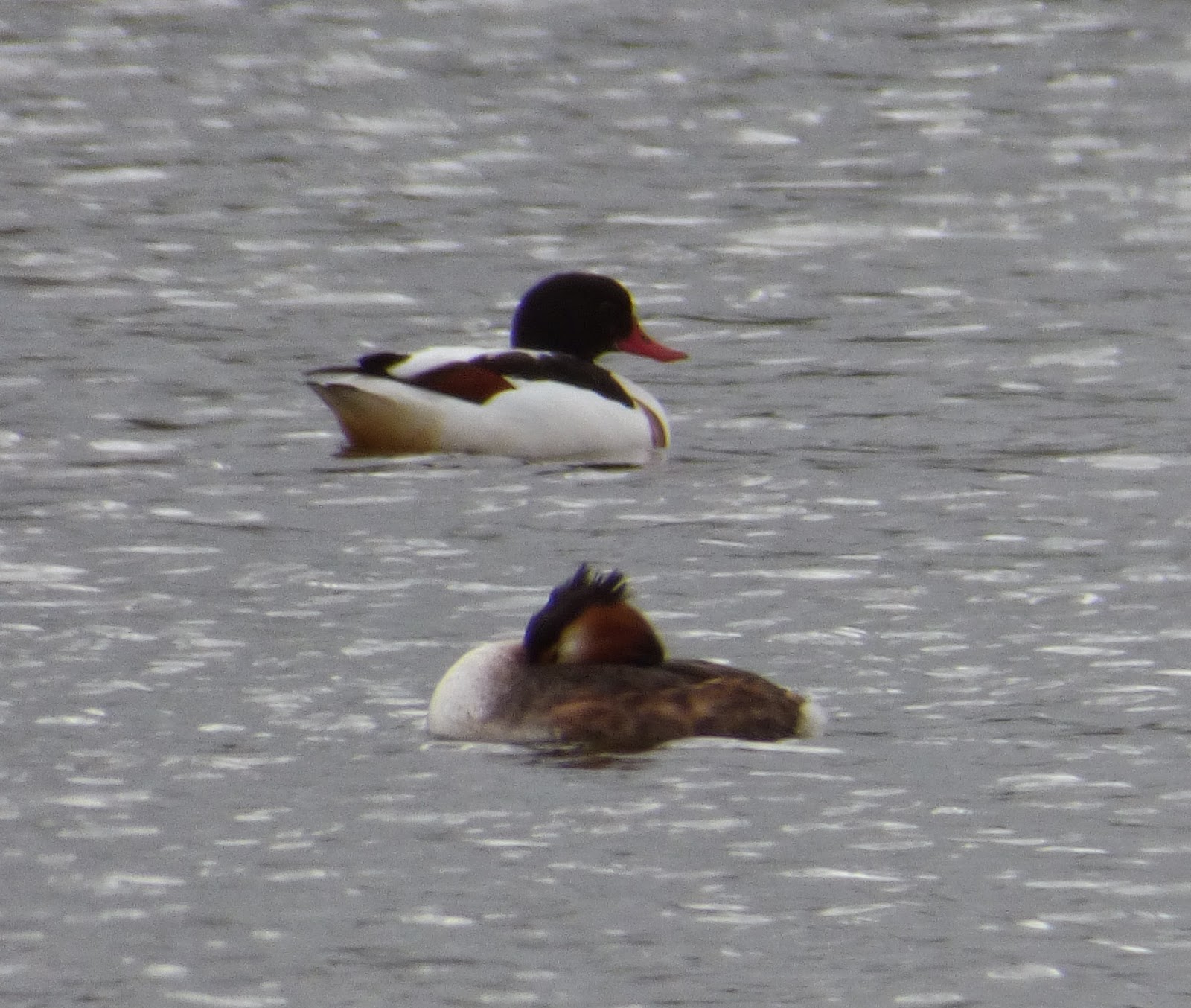 Shelduck and Great Crested Grebe, and pair of Shelducks on Birdham Pool (OM)