Thursday, 31st October: A wet and fairly windy day bringing us to the end of the month - a day which finds granddad committed yet again - this time on Halloween duties. I'm itching to get out on the Peninsula as I haven't been birding for several days, but at least I'm avoiding the worst of the weather. Today's news is fairly slow but includes the Spoonbill still present at Church Norton and a couple of Arctic Skuas off the Bill.

Pagham Hbr: Church Norton: Spoonbill (1st-winter) out in the very middle of the harbour and a 1st-winter type Marsh Harrier hunting over the harbour at around 11.15 were the highlights. About a dozen Blackbirds and 3 or 4 Song Thrushes around the concrete wall looked like new arrivals, but not much evidence of anything else (AH).  Bernie Forbes and Dave Smith added a Firecrest and 4 Chiffchaffs to the list, but failed to find a small flock of 8 Avocets reported from Sidlesham. 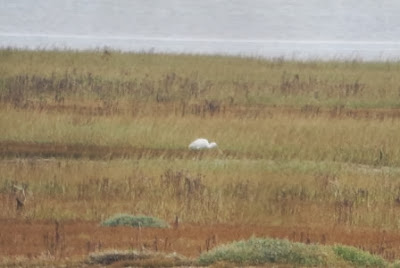 A just-about-identifiable shot of the Spoonbill in the centre of the harbour (photo: Andy House)

Mid morning I visited East Head in the vague hope of a Semi P Plover, but the waders were miles away on Pilsey Sands; in the dunes I flushed a Common Snipe, 6 Meadow Pipit and a few Skylarks. Also present were a pair of Stonechats and a stonking male Wheatear in full breeding garb. I walked a little way down to Snowhill Marsh but could not see a Spoonbill, I guess it’s probably the individual now at Pagham. On the way out I checked the sallows around the entrance drive, but not knowing about yesterday’s Yellow-browed didn’t go as far as the sailing club car park, damn. (CRJ).
Wednesday, 30th October: Much cooler today; sunny and bright this morning with just a light N breeze, becoming cloudy and windier with showers later. A Spoonbill was reported from Church Norton (per RBA) then a Great Grey Shrike there at 0930hrs, by the broken concrete slabs near the beach.  It was seen again by the posts along the beach, then disappeared from view and was not relocated (Terry Rawlings/SOS; also thanks to Trevor Gibson-Poole).

Pagham Hbr: North Wall: Pretty quiet - the Barnacle Goose of somewhat dubious origin was with the Brent & Canada Geese in the fields, 1 Rock Pipit, 2 Stonechat, 2 Chiffchaff & 10+ Reed Buntings along the wall, and a Lapwing, 5 Pied Wagtails, including one apparent White Wagtail and 3 Meadow Pipits in the paddocks, plus all the usual wildfowl & waders (AH). 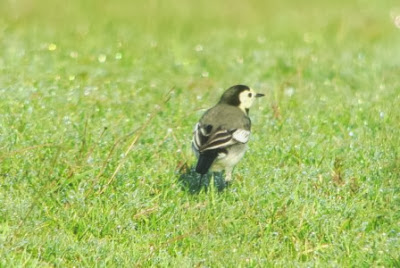 On the North wall today - (above) apparent White Wagtail (though perhaps flanks rather extensively grey?)   (centre) Lapwing and (below) Barnacle Goose with Canada Geese 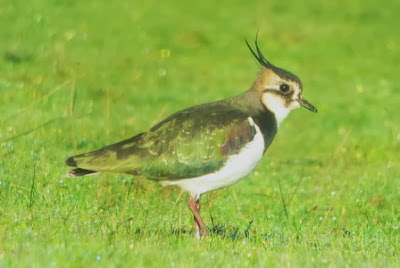 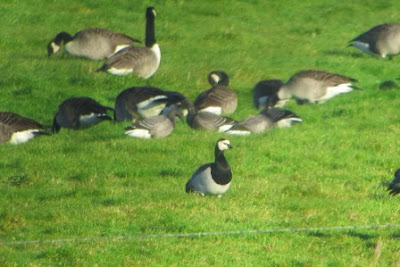