At Pagham Hbr yet another interesting morning on Church Norton beach started with a group of 3 redhead Goosanders close inshore, initially feeding in the surf then settling a little further out. At least 3 Long-tailed Ducks were still present, along with 3 Velvet Scoter, up to 5 Eider, 1 Goldeneye, 3 Razorbills, up to 20 Slavonian Grebes, similar numbers of Red-breasted Mergansers and a dozen Great Crested Grebes. Also flocks of 7 and 4 Common Scoter, 1 Great Northern Diver and 2 Red-throated Divers flew E and 20+ Gannets were lingering far offshore. The Merlin sped along the spit and there were also a dozen Skylarks and Linnets upon it. In the harbour there were a further 4 Goldeneye (including a drake) and the Peregrine was causing chaos as it left its 'home' island. (AH). 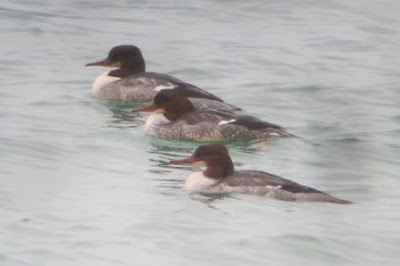 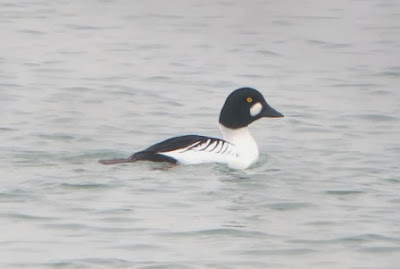 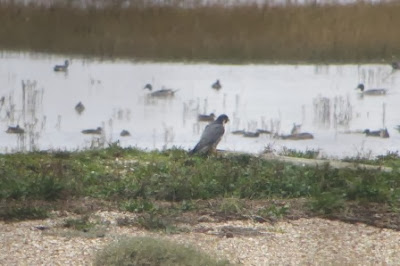 Redhead Goosanders, drake Goldeneye and Peregrine on the look-out, Church Norton (A. House)
Two Egyptian Geese flew from the Harbour at 1010, circled the fields behind the Breech Pool and then set off NW, possibly towards the gravel pits, but it was otherwise  very quiet on the Pool - just 100 plus Teal and a handful of Mallard and Wigeon. Not much happening on the wader front - 2 Redshank and 1 Common Snipe. An obliging Water Rail out in the open. Along the Wall 102 Canada Geese with 270 Wigeon. 23 Coot along Pagham Rife where there was also a pair of Green Woodpeckers. Honer Reservoir held just 2 Mute Swans and 2 Little Grebe. 5 Yellowhammers in that vicinity plus a very active Weasel. 2 Greater Spotted Woodpeckers at Honer Farm cottages. In a grassy field NW of the cottages were 1900 Brent Geese. No sooner than I had counted them when they all took off and came down on the new reservoir north of Church Lane. Although nearly a mile away I could hear the sounds of a communal bath taking place. About 40 minutes later the geese returned to the same field where a great deal of wing flapping and preening took place (Jim Weston).

Sunday, 1st December: Cloudy and dry with some brightness. Cold, wind NE3.
I start with an update on the situation at Medmerry, from the RSPB's Adrian Thomas:

"I have now had confirmation from the Environment Agency of the latest access situation at Medmerry. The beach is now open as far as the new breach in either direction. There is also a short section of footpath open (from Chainbridge Sluice to Ham). However, October's wet weather means that the EA's contractors will not be able to complete the other access routes this winter; they will return next April or May. The site will transfer into RSPB management once fully complete, although we will have a warden on site from February. The EA is hopeful that some of the other paths will be opened to pedestrians this winter in an unfinished state, but cannot confirm this yet. The car parks remain closed. I help the Agency pull together a regular e-update with the latest news - if you would like to receive it, please email medmerry@environment-agency.gov.uk and ask to be included."
Highlights today included 5 Snow Buntings at East Head (probably the birds from Medmerry?) and the gathering of Slavonian Grebes, Goosanders and Long-tailed Ducks off Church Norton.
Bernie Forbes led a Shoreham D.O.S. outing as follows" Fourteen members gathered in the car park at East Head this morning for a stroll around the head and Snowhill Marsh on a very dull overcast morning with a light northerly breeze and temperatures around 7C. Looking offshore we found little except for a small flock of Sanderling moving east out of the harbour. Continuing our walk north along the tide line we found to our surprise 3 female Goosanders feeding close inshore and a delightful flock of 70 Sanderling busy feeding along the receding tide line - always great fun to watch, we enjoyed their antics as they rushed around completely oblivious to our presence. Near the end of the dunes a superb flock of 5 Snow Buntings dropped in spending sometime as they flitted along in front of us. As normal they more or less ignored the hordes of people and their dogs out walking continuing to feed along the edge of the dunes. Marvellous! Birding from the northern tip of the Head we scoped the open water and to our delight found a Long-tailed Duck on the water and nearby a pair of Red-breasted Merganser and few Great-crested Grebe. On the inner salt marsh on the walk back we found a flock of mixed waders roosting including Dunlin, Turnstone, Grey Plover and a single Knot. In the dunes single Meadow Pipit, 2 Reed Bunting and pair of Stonechat. After lunch we had an adult Med Gull hanging around the car park and 4 Common Snipe feeding out on the greensward. From the seawall overlooking Snowhill we found plenty of Teal and Black-tailed Godwits with 2 sleeping Spotted Redshanks. A skulking Water Rail was only briefly seen by a couple of the group. In the lane by the marsh a raucous Great Spotted Woodpecker was very evident, and nearby we heard a squealing Water Rail. Following the entrance road back to the cars we scrutinised the large flock of Brent Geese for any interlopers without finding any, but compensated by finding 60 Golden Plover feeding amongst the geese. Thanks to all of you that came on the walk for making it a very enjoyable experience and helping out with finding and identifying the birds." (BFF). 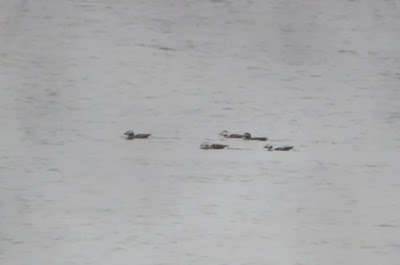 5 Long-tailed Ducks and Slavonian Grebe off Church Norton (A. House) 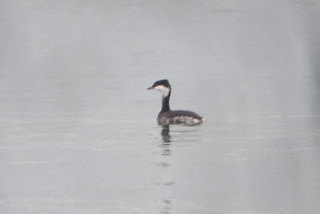 On Pagham Lagoon seven Goldeneyes including a full male and two more in the Harbour.  Also on the Lagoon was a Kingfisher and Cetti's Warbler and at the Little Lagoon we watched Turnstones so close and the air so still we could hear the stones being turned. (A. Kitson/M. Helps, per SOS).