Sunday, 28th July: Cloudy and windier this morning after yesterday's heavy rain. Today finds me forcing myself to stay in and deal with a large backload of birding admin that I need to clear, whilst hoping I'm not missing anything yet being prepared to dash out! And surely there has to be a Balearic or two lurking around somewhere, although an early sea-watch by Sam Hill failed to find one. Keep looking... 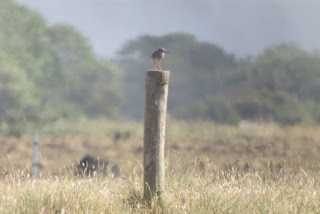 Saturday, 27th July: The forecast of torrential thundery rain overnight and all morning seems to be way off the mark as by mid-morning it is still warm, dry and sultry as I write this...!  Afternoon update: Thundery rain arrived mid-afternoon. Still quiet bird-wise with news at a premium.

The only report so far is from the ever-reliable AH who visited Pagham Hbr this morning:- North Wall: The Spotted Redshank was still in White's Creek with about 50 Redshank and a fleeting Common Sandpiper, and about 25 Yellow-legged Gulls and 6 Mediterranean Gulls in the harbour. Along the Breech Pool, the Ruff was still present, with 19 Black-tailed Godwits, 13 Dunlin & 40 Lapwing. A Pochard was in with 24 Tufted Duck, and 2 Sand Martins and a few Swallows were overhead. The Turtle Dove at Honer Farm called and showed briefly, and another one was calling unseen from the gardens at the east end of the North Wall. 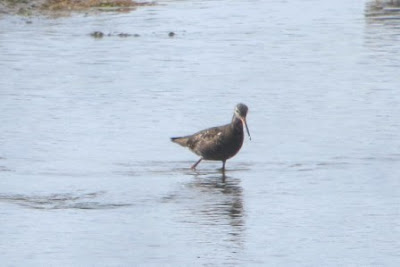 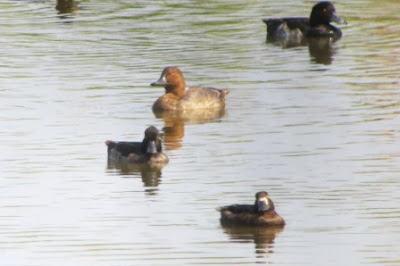 Friday, 26th July: Well I'm back from holiday again (non-birding) and ready to resume blog duties, but first I must thank Andy House yet again for his sterling efforts in keeping things going in my absence. It was great to be able to follow what was happening locally whilst sunning myself abroad, and for once it seems I didn't miss too much locally whilst I was away! The list of national rarities however was a different story with some real mega birds on offer - I thought July was meant to be a quiet time - and it just shows what can turn up at any time of year. That brings me neatly on to sea-watching with a gentle reminder that despite the hot (scorching) weather the sea can still produce the odd surprise at this time of year so it's always worth a quick look if you get the chance. Inevitably though, most of the effort is concentrated around the peninsula and Pagham Harbour at this time of year, so let's hope we get a good wader soon. I would like to congratulate Dorian and Bernie for completing the work on the steps at Church Norton (even without my supervision!) - I'm sure we and many others will have cause to appreciate their efforts in times ahead. On a different note, the Pom Trophy has not yet been presented to this year's winner George Heath, so I need to get on with arranging that. But before I close this mini-editorial, I would just like to say that being away for a while gave me a little time to reflect on a number of things - yes, even including the blog! It's only been up and running for about five months now (although it somehow seems longer), but it seems to be meeting a need and has been generally well received. I've had some good feedback and a number of compliments; great as that is, I view it not so much as my blog but our blog, for I couldn't do it without all you regulars providing information and I guess it's just a natural progression of the Selsey atmosphere that has fortunately always prevailed (OM).
Ok, enough of my waffle; on with the birding news:

PENINSULA: (Pagham Hbr) Ferry Pool: 24 Lapwing, 4 Teal, 2 Stock Doves and the family of 2 adult and 8 young Shelduck was about it. North Wall: Still plenty of birds here this morning - a Ruff, 17 Black-tailed Godwits, 9 Dunlin and 20 Lapwings on the Breech Pool and a Green Sandpiper over, and still a bit of song from the Reed and Sedge Warblers. The Turtle Dove was still at Honer Farm and another reported at Halsey's Farm, the summer-plumage Spotted Redshank was still in White's Creek, and 2 Whimbrel and 25 Yellow-legged Gulls in the harbour (AH). Mid-afternoon update from JW: North Wall. Turtle dove still at Grey Barn at end of Church Lane.  1 Yellow Wagtail Breech Pool - also Black Swan, 9 Dunlin, 7 Black-tailed Godwits, 23 Lapwing, 2 Common Sandpipers and the Ruff. Behind the pool - 17 Canada Geese and 62 Curlew, and 25 Little Egrets at roost. Honer reservoir - Tufted Duck with 7 young, 2 Common Sandpipers. 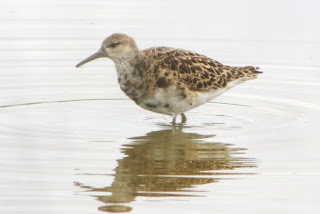 Ruff at Breech Pool (photo: Andy House)
A visit to the rubbish tip this morning gave me the opportunity of a couple of hours birding at the Chi GPs, starting at Westhampnett North (windsurf) pit. I didn't linger too long here as a speedboat was towing a water-skier around, but it did produce 4 Great Crested Grebes, a Gadwall, 3 Common Terns and a Grey Wagtail. I moved on to concentrate my efforts on the two Drayton Pits where I counted no less than 68 Tufted Ducks in various stages of eclipse, plus an additional female with a brood of 8 smallish ducklings. There were also 2 drake and 4 duck Pochard, 3 of the latter nervously guarding separate broods of 6, 6 and 4 ducklings respectively. Other counts included 8+ Gadwall, 17 Mute Swans (of which one pair had 7 cygnets), just 7 Canada Geese (the breeding groups having now dispersed), 6+ pairs of Little Grebe (of which 3 had juveniles in attendance), 6 Great Crested Grebes, 14 Lapwings and a single Common Sandpiper (OM).