Pagham Spit/North Wall: Chris Janman reports that the Spoonbill first seen on Monday is still in the harbour, near the North Wall. Also a Peregrine in the harbour & lots of Swifts about the spit.

Church Norton: Very quiet. A few Gannets offshore and a few Sandwich & Common Terns in the harbour.
Little to add this evening - 35 Curlews, including the leucistic one, 15 Little Egrets and a very young Ringed Plover with its parents on the mud. 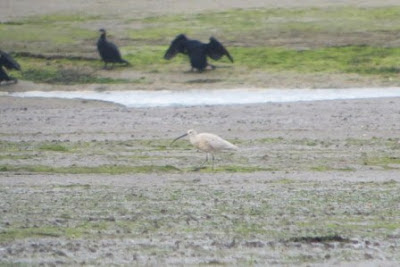 Ferry Pool: Totals from Chris Janman this morning - 1 Green Sandpiper, 2 Little Ringed Plover, 3 Dunlin, 5 Lapwing, 26 each of Avocet & Black-Tailed Godwit and 74 Redshank. Also he heard what might just have been a Quail calling from the field in a lull in the traffic noise, but further investigation this evening is probably needed. Pagham Spit: No sign of the Spoonbill this morning, though half a dozen Little Terns ferrying food to the nest was a welcome sight. Also 10+ Sandwich Terns and 20+ Common Terns about, but few waders bar half a dozen Curlew. A Peregrine flew in from the east and settled in the harbour before CJ watched it fly high and away to the south. 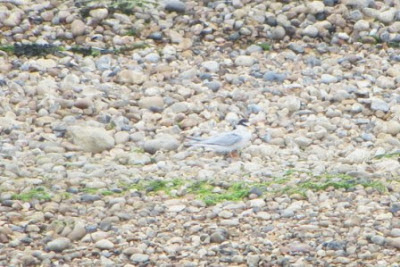 Pagham Lagoon:The duck Scaup and drake Pochard were still on the lagoon, with 20 Tufted Ducks and 5 Great Crested Grebes, and there were approximately 200 Swifts feeding overhead. 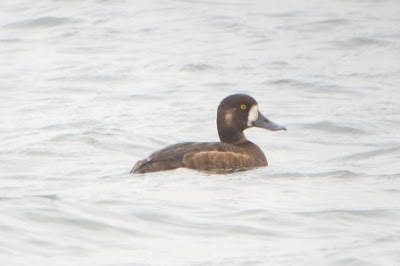 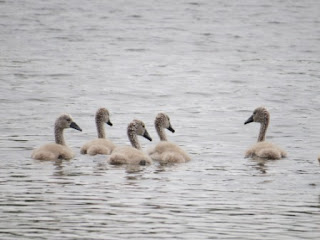 Selsey Bill: SR did a seawatch between 0715 - 9000 WSW F4 - dry and clear turning to overcast -
Gannet 6E 5W, Common Scoter 25E 3W,Oystercatcher 1 obs, Sandwich Tern 1E 7W, Common Tern 1E 14W 17 o/s, Swift 5 feeding o/s, Swallow 6 feeding o/s
Peninsula
Church Norton: I inadvertantly flushed a Spoonbill, along with a Grey Heron and a Little Egret from the small creek in the harbour on the way to the beach. The other two dropped down about 50 feet away but the Spoonbill kept going right across the harbour before dropping down. Fortunately it was sat out and still showing at 10am. Otherwise a fleeting Cuckoo was seen & heard and about 10 Curlews were in the harbour.

The Spoonbill was still in the harbour at 7pm, roosting with the big gulls near the harbour mouth. As I hope can be seen from the distant photo, it had a thick yellow ring on its left upper leg and two narrower yellow rings on its upper right (the lower of which looked like tag). Also, though not obvious in the pic, it appears to be an adult. The leucistic Curlew that has wintered in the harbour in recent years was back, too, on Tern Island. 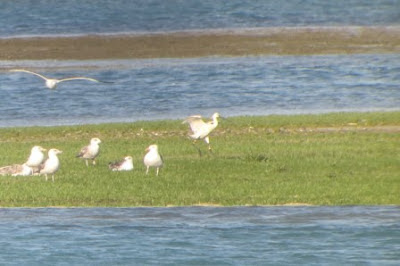 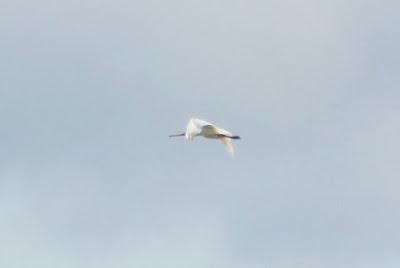 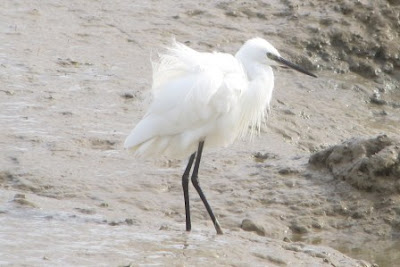 Pagham Visitor Centre: Sarah Russell had an unexpected encounter this afternoon - she takes up the story.......
Quite a surprise today. I came across a long-eared owl perched out in the open on the bare branch of an oak tree in the meadow to the left of the visitor centre, back toward the tramway. I'd been watching a butterfly when I looked up and there he was just a few yards ahead. Both taken by surprise we looked at each other for a few moments, he stretched himself up making out he was a lot bigger than he was, then took off, initially landing in the next tree, then changing his mind and making off across the meadow to the opposite hedge. The hedge he landed in is the same one we saw the other LEO sitting comfortably in back in April, the foliage is so dense now he'd be impossible to spot.