Wednesday, 31st July: Cloudy again today with a promise of further rain, though mainly dry at dawn. An early visit to the Ferry by SR found few birds, although it seems Sarah got a little more than she bargained for..! Despite various observers putting in some effort through the day, it remained very slow with only fairly mundane reports received.

Another empty day on Ferry Pool 6.45am:  Kestrel, 2 Shelduck with 5 ducklings, 4 Lapwings, 8 Black-headed Gulls, 4 Teal, 1 Buzzard, and c50 hirundines in the distance.  The juv Cuckoo was seen fleetingly then later heard near the car park.  Also in the car park the usual foreign registered camper van and a small car with a surprised man standing beside it in garish shorts, he was in the process of getting changed! (SR).

A belated report from yesterday from my old mate Bernie and the Worthing boys... sounds like they had a great time:- What a dreadful day with plenty of rain and a strong south/west wind. Seeking shelter at the Bill in the lee of the east side, sea watching was pretty dire; with 20 Gannets mainly moving W and two Sandwich Terns, we soon aborted to Church Norton. With steady rain all morning, we spent all the time in the hide sheltering from the elements. Finding birds in the gloom was not easy - we counted 100 Dunlin, 5 Whimbrel, a single Grey Plover and around 25 Ringed Plover. Three Sandwich and two Common Terns loafing and only three Med Gulls. A few hirundines moving south with at least 12 Sand Martins and 10 Swallows. (Bernie Forbes, Dave Smith & Dorian Mason).

At the Breech Pool/North Wall all very quiet this morning; JW reports just 3 Black-tailed Godwits, 27 Redshank and 32 Canada Geese. AH adds"Can't really lift the sense of birdless despair out there today...30 minutes at the Bill for 2 Black-headed Gulls west! Church Norton only marginally better - 3 Whimbrel, 30 Curlew & 60 Dunlin in the harbour, 15 Swifts south over the car-park, and about 50 Sand Martins feeding over the field by Compton's Farm Shop." Earlier, C&ME also had 3 Peregrines, plus 3 Common Terns, the Dunlin flock and 25 Ringed Plovers at Norton. Then CRJ arrived to find the family party of 5 Peregrines, and a Whimbrel. He also visited Honer Lane late afternoon where there were 2 male Kestrels, 3 male Yellowhammers singing, plus on the reservoir 3 Common Sandpiper and the usual fem Tufted with 7 growing young.


Tuesday, 30th July: A wet and windy morning, giving me a good excuse to stay in and finish off yet more birding admin and proof-reading. I trust not all of the locals will have an excuse though, and that some birding news will filter in today.... ! Meanwhile, a couple of items of more general interest:- Firstly, the Pom trophy (or to give it it's full title The Barry Carter Memorial Pom King Trophy) has now been duly received and amended to show the new Pom King for 2013 - George Heath. George becomes the 11th different title holder and arrangements will be made for the presentation in the near future. Secondly, I received a letter out of the blue yesterday from none other than Tony Marr. All older regulars will be very familiar with Tony's name, but for anyone unaware he was a founder member of the Selsey Bill observatory from 1959 onwards and also a driving force in the SOS,  influencing many birders of my generation and ultimately becoming a key member of the BOURC. Anyway the letter he sent me was actually a copy of a letter I'd sent him, way back on 2/2/1987, following an excellent talk he'd recently given at the SOS conference. I'd long since forgotten all about the letter, in which I commended him on his presentation, adding "when you retire you should consider a second career as a lecturer as you seem very professional now, " and I also added a postscript saying "I trust you won't produce this letter 25 years later!" Tony's short reply (on the copy of my letter) was as follows: "Owen, sorry I'm one and a half years late!  It was a much-appreciated letter at the time and quite a prediction. I did take up a second career lecturing, on expedition cruise ships! Your psychic powers worked well - are they as accurate in predicting Poms?!" Of course they are Tony -  I've got this theory, just ask any of the regulars!

Bonus points to SR for being out and about - she reports that the young Cuckoo was again in the cycle track area behind the Visitor centre early this morning, but as she prepared her camera the bird flew off and heavy rain set in and that was that! 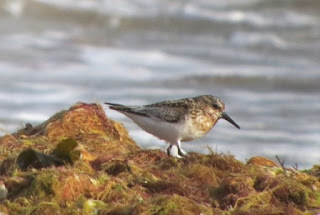 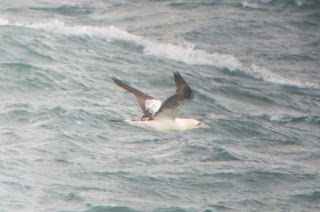 Monday, 29th July: A cloudy and cooler morning with a brisk SW wind lured me to the Bill in hopes of shearwaters and the like, but regrettably in two hours there was rather little on offer save for a couple of dozen Gannets passing through. I didn't do much better at Pagham Hbr either, though Sarah Russell reports on finding a juv Cuckoo being fed by its Dunnock hosts near the Visitor Centre...
Selsey Bill (0935-1135hrs): Dry with heavy cloud, wind brisk SW5-6. (Obs: OM)
Gannet - 4E, 20W
Turnstone - 4 ob
Med Gull - 2W
Common Tern - 3W plus 4 os moving to and fro
Sandwich Tern - 5 os, to and fro
Evening sea-watch 1710-1830hrs. Wind SW5 (Obs: SH)
Gannet - 18E, 32W
Sanderling - 1 ob, 2W
Turnstone - 6 ob
Sand Martin - 25SW
Common Tern - 1W
Sandwich Tern - 8W
Pagham Hbr: At Church Norton all I could find were a Whimbrel, 30 Dunlin and 20 Ringed Plovers, with very little sign of activity around Tern Island. A couple of calling phylloscs were probably Willow Warblers but refused to show themselves, whilst Sidlesham Ferry pool was just about birdless when I looked, except for the pair of Shelduck with young (see SR's report). I did try out the new steps at Norton for the first time - well done again to those involved.
An interesting round-up report from Sarah Russell.. "In the area behind the Visitor Centre I finally discovered what had been making the strange loud noise I'd been hearing from a hedge for the last couple of weeks, it mystified me as I could only see a Dunnock flying in and out.  It was of course a Cuckoo and the youngster was flying about early this morning (6.30am), the Dunnock having to work hard to keep up, the youngster still very vocal.  I managed a hasty photo but it isn't very good.  Also about were 5 Whitethroats, 2 Blackcaps, 4 Swallows and a Chiffchaff but it soon rained and went quiet.... Ferry Pool 7am:  Two Shelducks and their 5 ducklings, 13 Black-headed gulls, 1 Oystercatcher and a Buzzard was all I could find.  Once the buzzard arrived the ducklings hid under mother. Church Norton: With the wind force 5-6 there was very little activity;  1 Common Tern, 5 Little Egrets, 17 Curlews including the leucistic, 11 Dunlin, 3 Great Crested Grebes, 7 Swallows." 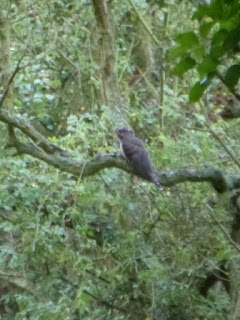 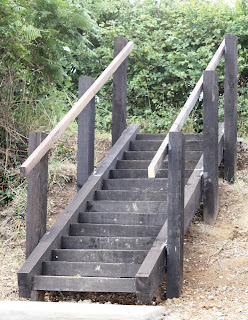 In case you haven't seem them yet, these are the new steps at Church Norton - and they certainly look sturdier than the old ones they replaced!
Posted by Birderowen at 18:04