Pagham Hbr: North Wall and East side: Plenty of Teal, 4 Snipe and 45 Black-tailed Godwits on the Breech Pool this morning, though I could not locate the Ruff, then a flock of 30 Swallows suddenly appeared over the pool in a brief feeding frenzy before moving off south. A Grey Heron found and eventually swallowed an enormous carp; also 2-3 Cetti's Warblers, 8 Chiffchaffs and 6 Reed Buntings in the area. Along White's Creek/East side a Kingfisher was active and lots of Wigeon were present, whilst waders included a further 30 Black-tailed Godwits and 1 Bar-tailed, 2 Greenshank, a Spotted Redshank and c.70 Golden Plover (OM). 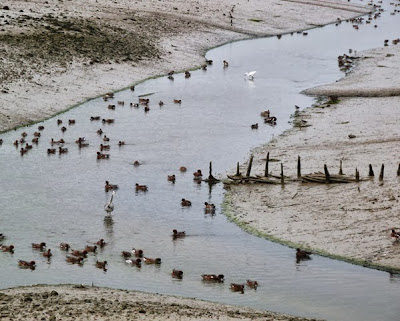 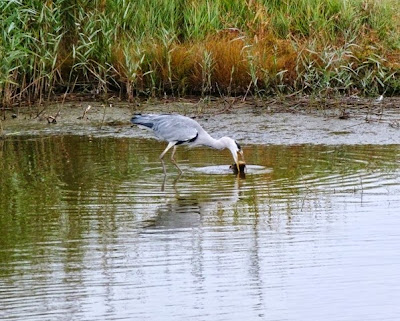 Above and below - Grey Heron breakfast - catch your carp in the Breech Pool, wait a while then swallow! 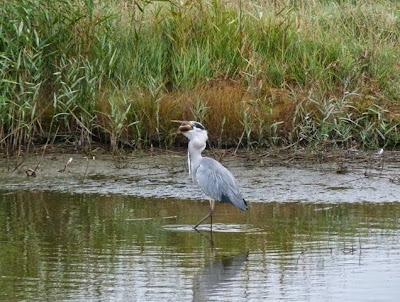 Thursday, 17th October: Mainly dry and bright with a fresh breeze W4, and a few brief showers early on.

At Pagham Hbr, the first report of the day is from CRJ who found things predictably quiet, " I was on the North Wall where it was very quiet at high tide, just 2 Snipe and c30 Black-tailed Godwit on the Breech Pool. On and around Honer Reservoir were 700 Black-headed Gulls, 10 Med Gulls, a Green Sandpiper, 9 Tufted Duck and 2 Mallard. Later on Marsh Farm were 5 Swallow and 8 House Martins, and on Bramber Farm just a couple of Buzzards, 2 Yellowhammers and 2 Chiffs."
Lovely enough at Pagham Harbour in the sunshine, bags of waders and ducks, dragonflies (migrant hawkers) and butterflies (including two clouded yellows) and topped with an Osprey hovering up the north end for some ten minutes before drifting off NE at 13.16, seen from the Pagham Spit hide and thus pretty distant. Near the hide some 100 Brent Geese and on the Lagoon I counted 52 Little Grebes (A.Kitson/SOS).


Fishbourne Creek: Very pleasant out in the sun this morning, if fairly quiet with a high tide - highlights were the Whimbrel back in its regular wintering spot, 2 or 3 Greenshank flying about, 5 Rock Pipits moving about together and a few Meadow Pipits, 2 Reed Buntings, 20 Black-tailed Godwits, about 500 Wigeon, many of which are now attaining winter-plumage, plus the Black Swan (AH). 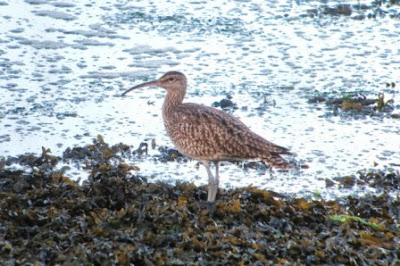 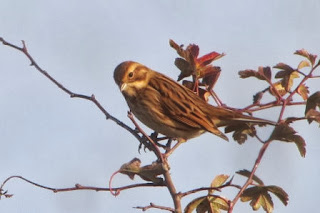 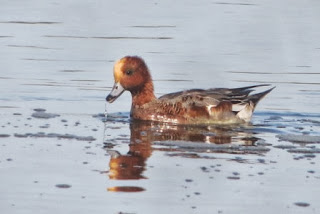 At Selsey Bill this morning, a report of a Merlin which came in off the sea and settled on Bill House fence close to the observers (GH/PC).

Wednesday, 16th October: Windy and rather gloomy with rain imminent.... sure enough it arrived giving a wet day until mid-afternoon when it brightened. Anticipating a lack of observer coverage and a slow news day, we start with items of interest from preceding days..

Late news from yesterday.....A lovely warm sunny day down at West Wittering gave us a good variety of waders with 2 Bar-tailed Godwits and 25+ Black-tailed Godwits, 200+ Dunlin, a handful of Ringed Plovers, 43 Golden Plovers and at least 30 Grey Plovers. We only noted one Knot, 1 Greenshank and 1 Snipe along with a single Wheatear on the dunes. However the highlight was the juvenile Spoonbill which we hadn't realised was still there on Snowhill Marsh. (per Dave & Jean Killick/SOS website)

Canada Geese, Barnacle Goose and hybrid offspring, Breech Pool, 8th October (photo: A. Kitson)
Finally, one for all you mammal buffs - below are interesting shots of a Black-headed Gull take-away at Church Norton on 3rd July - can you  shrewdly voleunteer to identify the rodent with no mousetakes! (Photos: Dorian Mason). 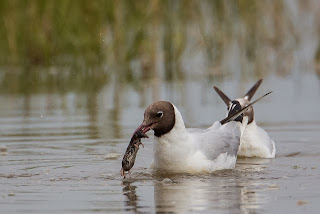 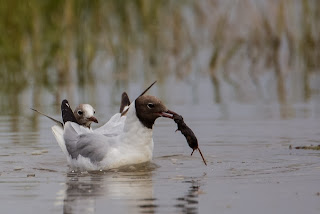 Today's news:- Selsey Bill: 40 minutes from 8.20am produced 6 Gannets E & 2W, a single Wigeon and 2 Teal E, and that was it! (AH).
Pagham Hbr: Church Norton: Lots of Goldcrests calling in the churchyard, also a Blackcap and a couple of Chiffchaffs about, plus 2 Jays and a Green Woodpecker (AH).