Monday, 21st October: Not for the first time this autumn the apocalyptic weather forecast of prolonged semi-monsoon rains and severe gales was a good way wide of the mark. Granted it was fairly wet early on, but most of the day it was actually just blustery and fairly dry; my plans to deal with domestic chores today thus left me feeling I'd wasted a good birding opportunity. It is apparent that most of the regulars had similar ideas and birding activity seems to have been at a premium today on the Peninsula! Thanks to Jim Weston for being the first (and only?) with any news! Weather prospects look decidedly similar for the next few days - but come on folks it's out there waiting to be found...and the sea must be a good bet.


Sunday, 20th October: Showers and cloudy then brighter, but quite blustery with a fresh/strong SSW wind. My instincts told me to head to the Bill, but with the prospect of a new bird for Sussex in the offing, it was instead time to make the long walk down the east side of Thorney Island to Pilsey. There I joined a small gallery of hardened Sussex listers awaiting the appearance of the Semi-P Sand but alas no sign of it in the difficult conditions, although at time of writing it is currently back just over the border at Hayling Island. It is tantalisingly close to the Peninsula and the game is not over yet...! Meanwhile,  the sea-watch at the Bill was rather disappointing given the conditions; further news awaited. Frequent heavy showers in the afternoon obviously dampened the enthusiasm of many observers.

Saturday, 19th October: Much better sea-watching conditions today with a good deal more activity, producing some interesting birds including a Balearic Shearwater, a Red-necked Grebe and several Shags. A Long-tailed Duck passing Church Norton was also a surprise. (Major news just off the peninsula with the discovery of a 1st-w Semi-palmated Plover found at Hayling Island, Hants and which has now visited Thorney Island (Pilsey) to sneak onto the Sussex list (well done Barry and Margaret Collins). This is literally just across the water from West Wittering/East Head - so keep your eyes open as it could visit us soon!)

Ian Pitts reports "I have a natural dislike for new technology, which became my undoing this morning and eventually my form of deliverance...it took me 90 minutes to download an app for my iphone - do not ask why but it was a comedy of errors which resulted in me leaving for a late walk at 10am, it also resulted in me getting soaked in the final half hour of the walk. Anyway why tell this story, well if I was not so late I would not have been looking out to sea at 11.45am when a male Long-tailed Duck flew south at about quarter mile range from Bluebell Wood (Nr Church Norton). In addition, 6 Swallows in one flock south at 10.20am, a flock of 12 Common Scoter south, plus a Guillemot along the shoreline and a Jay behind the horse paddocks, of interest also two flocks of Skylarks on the move totalling 10 birds" (IP).

Pagham Hbr: Church Norton: A Greenshank, 2 Bar-tailed and 20 Black-tailed Godwits in the harbour, and a few Brent Geese that looked like they were passing through. Offshore, 12 Common Scoter and a Guillemot went west quite close in, and Ian Pitts had a drake Long-tailed Duck west around 11.30 (annoyingly just after I had left). Also a steady stream of Gannets west, 30+ Mediterranean Gulls and 6 Great Crested Grebes offshore. 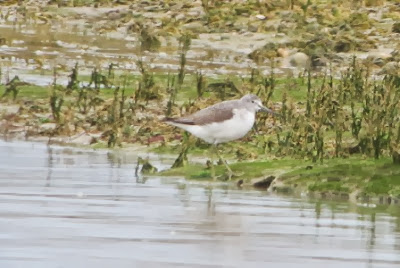 (above) Greenshank at Church Norton and (below) two Bar-tailed Godwits (left) with a Black-tailed preening  (photos: Andy House) 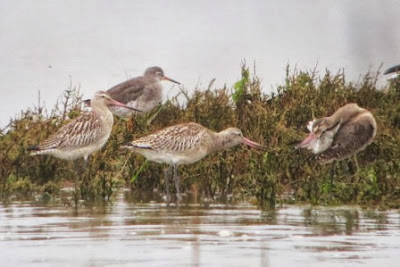 Afternoon walk to C/Norton cut short, emergency visit to Brent Lodge. Found this Great Crested Grebe in the ploughed field between the Severals, think it had broken its leg, lucky to spot it and hopefully it will make a good recovery (S&SaH). 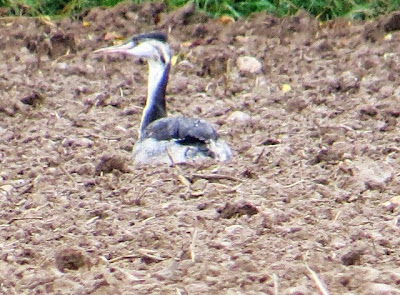