Sunday, 27th October: With the autumn storm season well upon us, sea-watching is probably going to be the only option for the next couple of days, and a severe storm is forecast for tonight. Jim Weston was out early this morning though (did you forget to put your clock back Jim?) but by mid-morning the wind was already strong-gale force SSW.  The Bill was covered this morning and again in the afternoon, producing a Red-necked Grebe, a Merlin and an Arctic Tern but little else of note.

Pagham Hbr: North Wall: (Early am, wet and windy). A pair of Stonechats in the stable field. White's Creek was busy - 210 Lapwing, 70 Black-tailed Godwits, 23 Redshank, 1 Spotted Redshank, 7 Grey Plover and 130 Wigeon. Breech Pool - 180 Teal and 2 Snipe. 1 Wheatear along the Wall. Highlight - 38 Stock Doves in the field at the top of the footpath that runs behind the stables (JW).

Not much to report at Church Norton - a Black Redstart on the concrete slabs being about the only bird of note (AH).


Saturday, 26th October: Wild and windy conditions today with the forecast of a very stormy couple of days ahead. First reports indicate that there was not a great deal on offer this morning at Pagham Hbr, whilst sea-watching at the Bill was disappointingly slow with nothing like yesterday's variety....reports awaited.

Pagham Hbr: Church Norton: Not much out of the ordinary - 3 Knot, the leucistic Curlew, 10+ Black-tailed and a few Bar-tailed Godwits in the harbour, a few Skylarks over, 4 Mediterranean Gulls on the beach and about a dozen Gannets offshore. Sidlesham: A Raven cruised low over our garden southwards at 2pm, being ushered through by the local Jackdaws and Rooks (AH).


Friday, 25th October: After several days of dire sea-watching it's good to have a nice variety of species to report today. JA and AH claimed the spoils, which included a Slavonian and a Red-necked Grebe, a Balearic Shearwater, the first proper autumn movement of R/b Mergansers and a Long-tailed Duck.


Pagham Hbr: Church Norton: The juvenile/female Black Redstart (reported by C & J Moore and C & M Eames on 12th Oct) is still at Greenlease Farm; it was flitting in and out of the barn next to the clock tower late this afternoon.  Great little bird!  (pic. attached) (SR). 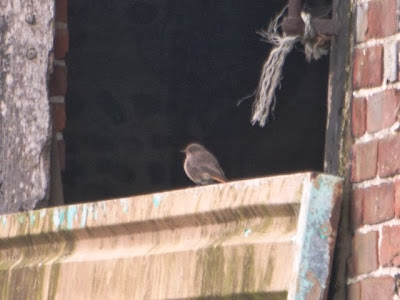