Thursday, 24th October: Much better weather-wise and bird of the day was undoubtedly the Glossy Ibis that dropped in at the Breech Pool, though unfortunately it decided to move on all too quickly. A Jack Snipe at Fishbourne Creek was also noteworthy.
A visit this morning to Apuldram Church and then out onto Fishbourne Creek. Huge concentration of Wigeon in the main channel with a late count of 6 Greenshank, 4 Rock Pipit and 2 Grey Wagtail. Single Common and Jack Snipe with a dashing Kingfisher. In the bushes 2 Chiffchaff, 3 Goldcrest and Stonechat (BFF/DIS/DS)
Pagham Hbr: North Wall: I had just reached the gate, at about 9.45am, when I saw what I thought was a Cormorant circling in towards the Breech Pool - but it had a long bill and feet! At long last a Glossy Ibis on the peninsula this year. It settled in the channel at the back of the pool for about fifteen minutes, allowing about half a dozen of us to see it, then it went up and away to the north-east, though given their form it is quite likely to return. Also the Ruff and a few Black-tailed Godwits on the Pool, and a few Reed Buntings and calling Cetti's Warbler and Water Rail about. Nothing much on the Lagoon bar plenty of Little Grebes and a few Wigeon and Tufted Duck (AH) Also a  Kingfisher at White's Creek along with 160 Wigeon, 120 Lapwing and 18 Redshank. Following disturbance by 2 dogs Breech Pool was very deserted apart from a pair of Swans and 4 cygnets. Then the Glossy Ibis dropped in! (JW). 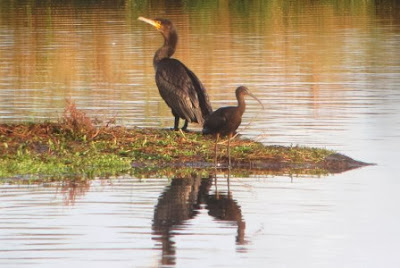 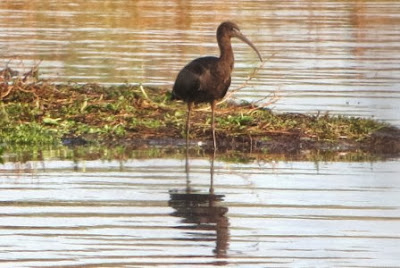 Glossy Ibis (with Cormorant for comparison!), Breech Pool (photos: Andy House)
Wednesday, 23rd October: Changeable weather and a strong/gale south-westerly drew me to the Bill this morning with my old pal Bernie Forbes. We arrived full of anticipation, hoping for a good down-Channel seabird movement, but alas it was quite the opposite with little moving as we struggled to notch up 20 Gannets in 2 hours! Our next stop at Church Norton was also fairly dire, not helped by a shooting party on farmland immediately adjacent to the West side of the harbour. C'est la vie! 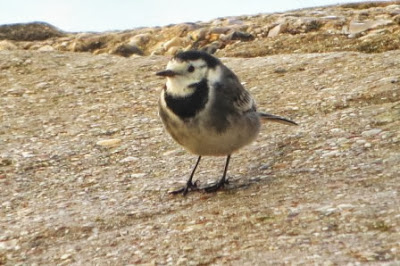 A forlorn Pied Wagtail on the sea-wall at the Bill-tip (photo: Andy House) and below, a less forlorn-looking Grey Wagtail at East Beach pool, Selsey (photo: Sarah Russell). 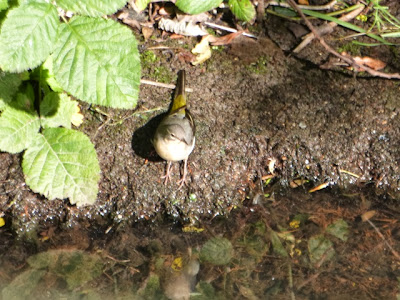 This morning I tried for the Yellow-browed Warbler at Sidlesham but needless to say conditions weren't right, being so windy.  Then I went along to the Bill and sat in the sun for a while which was pleasant but nothing was happening.  After that I went out to post a letter, a Grey Wagtail passed by and I caught up with it at East Beach Pond, a modest pond tick.  On the way home a Wheatear along East beach (SR)

Pagham Hbr: Church Norton: Predictably quiet again in the blustery conditions. There was hardly a bird to be seen in the churchyard, whilst the harbour seemed to hold very few waders until the shooting started  on the adjacent farmland. Small flocks of Grey and Golden Plovers soon took to the air, closely followed by Dunlin and other waders and wildfowl. The best we could find were 2 Wheatears on the old concrete harbour (BFF/OM)

Tuesday, 22nd October: I had plans for a sea-watch at the Bill this morning with Bernie and Dave Smith, but the thought of facing a stiff southerly driving persistent rain at us all morning was too much to consider and we took the sensible option; perhaps tomorrow! It wasn't until early afternoon that the rain subsided, and soon after I got a call from Ivan Lang (RSPB warden) reporting a Yellow-browed Warbler calling from the trees behind the Visitor Centre at Sidlesham - though it apparently didn't show. That apart, things were fairly quiet again bird-wise, with just a few reports received....
Another slow morning with not much to report. Half an hour at the Bill produced 4 Gannets west, and Church Norton was not much better. Highlights were a very dark juvenile Peregrine and a few Bar-tailed & Black-tailed Godwits in the harbour, a couple of Chiffchaffs and Goldcrests around the car-park and 3 Swallows over, and a few Mediterranean Gulls on the beach (AH).


SR reports" You didn't miss anything by not going to the Bill today, I went along for a while this afternoon but nothing much was happening as you can see:"
Selsey Bill: 1330-1515hrs: High tide with mist, wind strong S 5 (couldn't see much beyond the mile basket).  Sunshine as I was packing up, that's when a Kestrel appeared, it was hunting in front of the Oval field but got chased away by a crow (SR).
Gannet - 8E, 12W
Great Crested Grebe - 1 os 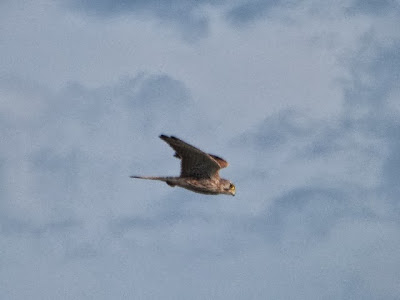