Friday, 13th December: Dry but cloudy all morning, with a cool, brisk S/SSW wind 4-5. Rainy, overcast and gloomy all afternoon. I firstly headed for Pagham North Wall to try and catch up with the Ruddy Shelducks, but misjudged things and found it was high tide and they were not on view. I spent a while chatting to Peter 'Palace' Callis about football and The Ashes, then it was time to move on. A visit to the Bill produced a few bits and pieces but nothing unusual, then with the tide now receding, I returned to the North Wall to scan the mudflats for the Ruddies. Luck was against me however, for shortly before I arrived, driving rain set in and it was nigh-on impossible to watch with rain and wind streaming into my face. Time to abandon and go home, but not before the final pleasure of stepping in a giant pile of dog's mess by the Salthouse. Some days you win......!


(During my watch, perched up on the south-east corner wall, I kept hearing this clicking noise which I couldn't place, until eventually I twigged it was Turnstones, which had been out of my view but flicking over stones on the shingle below me! Common, but what smart birds they are). 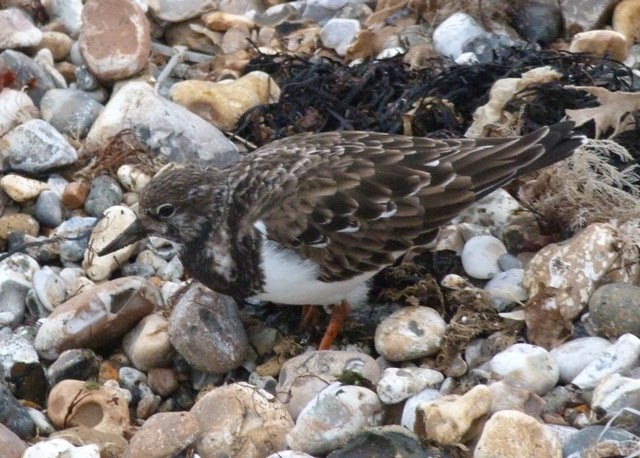 Pagham Hbr: North Wall; Around 1500 Brent Geese, 300 Golden Plover and  1000 Lapwings whirling around this morning, and a Spotted Redshank  in White's Creek this afternoon (OM).

Church Norton: Quiet - Up to a dozen Red-breasted Mergansers offshore, in the harbour most of the usual waders and wildfowl, including a few each of Black- and Bar-tailed Godwit and several hundred Knot (AH). 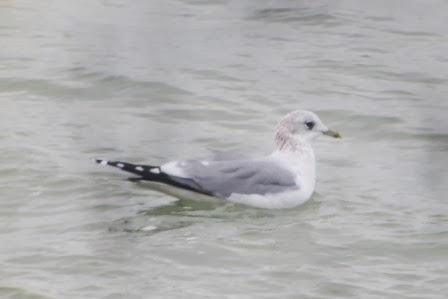 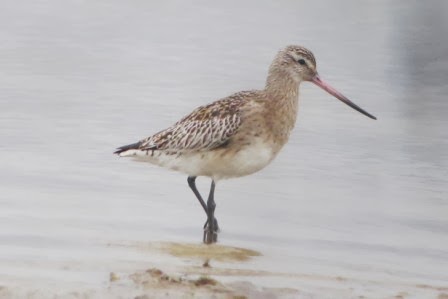 Common Gull at Selsey Bill, and Bar-tailed Godwit at Pagham Hbr (A. House)
The Ruddy Shelducks were out there this morning but I only saw them from a distance, they were out in the middle of the harbour close to a large flock of Great Black-backed Gulls, their distinctive colour and good size made them quite visible even though they were so far away (SR).
I don't know the current status of Ruddy Shelduck neither nationally nor in our own county, but surely the two at Pagham are good contenders for wild ones! This afternoon I went to twitch them, walked down from the Salthouse, found them below the Old Jetty and as soon as we made eye-contact, at some 200m, they took fright (thereby proving their pedigree) and flew a further 200m onto the Central Plateau where they fed constantly, heads going side to side, their bills sieving the surface slurry. I wanted them to be male and female and they may be but were the same size and the same colours, lovely birds and what long legs! (A.K. per SOS)
(Well Alan and Sarah, I saw the gulls; guess I should have gone to Specsavers!!) (OM)


Thursday, 12th December: Dry and cool, with some cloud and sunshine after a misty start. Wind light ESE2. The Ruddy Shelducks were still present but otherwise little out of the ordinary was to be found...
Pagham Hbr: East side: Had a walk along the east side of the harbour this morning, the highlight of which was the two Ruddy Shelducks still out on the mud. Not much else out of the ordinary, though around 300 Golden Plover was a good total, and up to 1000 Brent Geese coming and going was a spectacular sight and sound. Also a couple of Yellowhammers and 20+ Reed Buntings were in the trees by the gate into the Slipe Field  (AH). 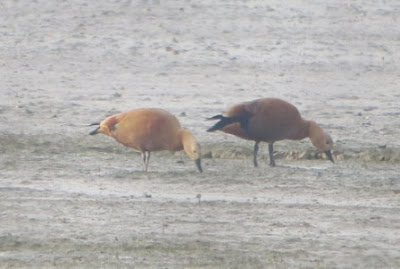 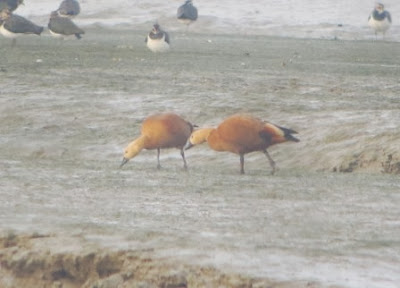 Wednesday, 11th December: Bright and sunny after early morning frost and mist. Wind light E/SE 2-3. Still a varied selection of species to be found on the peninsula, with a couple of Ruddy Shelduck now featuring.


I took a walk from Selsey East Beach along to Church Norton in the sunshine this morning.  East Beach: 32 Turnstones on the beach, 3 Red-breasted Mergansers close to the shore, 3 Great Crested Grebes, 2 Meadow Pipits E, 4 Pied Wagtails E, and a late bumble bee.  I looked in on the pond where the self-proclaimed 'bramble bashers' (Manhood Wildlife & Heritage Group) had been at work removing small areas of habitat.  The Muscovy Ducks were still there along with the usual Grey Heron but I failed to find anything of note.  Further along toward Church Norton I found the 5 Long-tailed Ducks in a tight group off the first sandbank, it was low tide and walking out along the bank I had a good view, they were almost in East Beach territory but paddled off in the wrong direction, I'd like them as an East Beach tick.  On the smaller sandbanks were c500 roosting Grey Plover, Redshank and Dunlin with 18 Bar-tailed Godwits. Could only find 3 Slavonian Grebes, 3 Great Crested Grebes and 2 distant Divers thought to be Black-throated.  Notable on the spit were an RSPB work party, the 2 Peregrines on their island next to tern island, and a female Goosander in the harbour entrance (Sarah Russell). 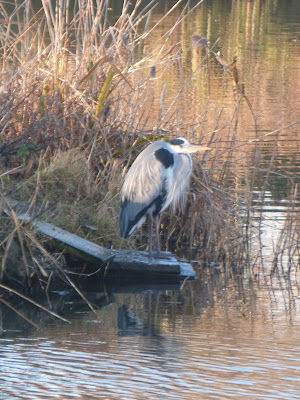 Grey Heron at East Beach pool, Selsey (S. Russell)
Jim Weston visited Pagham North Wall and fields and reports as follows: Another lovely day. Two Ruddy Shelduck  in White's Creek. Two Common Snipe were the only waders visible on Breech Pool, also there 80 Teal and a handful of Wigeon and Mallard. Along Pagham Rife a noisy Cetti's Warbler, 2 Little Grebes and 2 Green Woodpeckers. Honer Reservoir was completely devoid of birds. Towards Fisher there were 103 Curlew and 76 Wigeon. These were the only Wigeon I encountered in the Fields whereas I had over a 1000 on Sunday's WEBS count. Seven Fieldfare near Marsh Farm. The Brent were initially behind Honer Farm Cottages but were apparently disturbed and most flew out to the Harbour the others landed on the new reservoir north of Church Lane. Later they regrouped on the fields behind the Breech Pool, I estimated 1100 birds (JW).
Posted by Birderowen at 18:32