Monday,16th December: A wet and windy winter's day, with sea-watching clearly being the best option. AH recorded a big movement of auks this morning - nearly all Guillemots - in a strong and rainy south-westerly, though little else was moving. 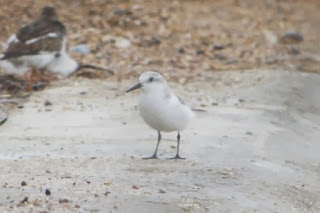 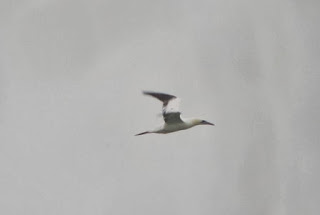 Sanderling and Gannet on a wet and windy morning, Selsey Bill (A. House)
Sunday, 15th December: Generally damp and fairly gloomy for much of the day with a fresh southerly wind keeping things cool on the coast. At the Bill a selection of divers and grebes included a Red-necked Grebe and a little movement of Slavonian, whilst at Pagham the 2 Ruddy Shelducks (which I've not yet seen!) were still present.


Pagham Hbr: Church Norton: nothing much in dire weather, but there was a big gathering of 150+ Great Black-backed Gulls, almost all adults, in the harbour and a dozen each of Red-breasted Merganser and Great Crested Grebe offshore.
(Also a belated report - I forgot to put on Friday's list from the Bill a Fulmar E (and was reminded how rare they are in Dec!) (AH) 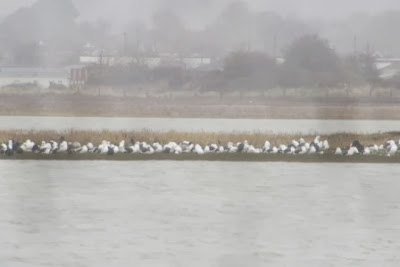 A gathering of Great Black-backed Gulls in the gloom at Church Norton (A. House)
North Wall: Mild, murky and wet. 2 Ruddy Shelduck still in the harbour with a group of Common Shelducks. Along Pagham Rife a group of 29 Yellowhammers. On Honer reservoir there were 9 adult Mute Swans, to the east of the reservoir the finch flock has increased to around 120 birds, mainly Linnets. At Marsh farm there were 11 Pied Wagtails. A flock of around 1000 Brent Geese were just to the east of Marsh Farm (Jim Weston).


Saturday, 14th December: Rather cloudy but mainly dry and quite cool, with a strong SSW wind.


Fishbourne Creek: Highlights of a pleasant morning here were - a flock of 6 Spotted Redshank, 2 Greenshank, the wintering Whimbrel,  a Green Sandpiper, 3 Grey Wagtails, 3-4 Rock Pipits, singles of Yellowhammer and Bullfinch, up to 10 Pintail, 100+ Black-tailed Godwit, 20+ Common Gulls, a couple of Buzzards and good numbers of Brent Geese, Wigeon and commoner waders. The only slight downside was not a sign of a Goldeneye on what was once their favourite haunt in the area (AH). 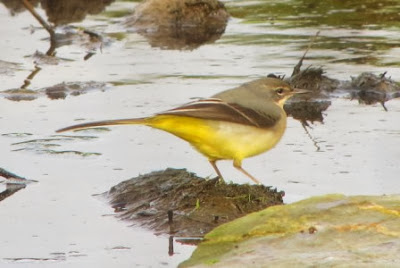 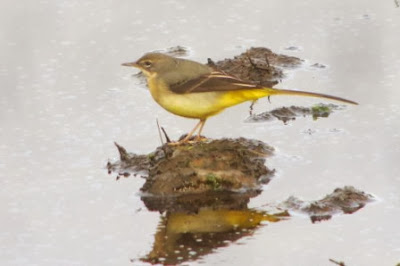 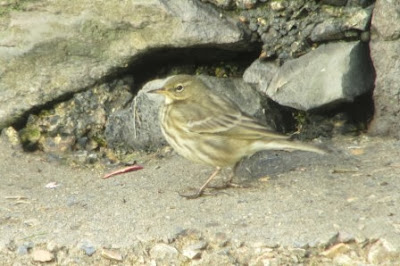 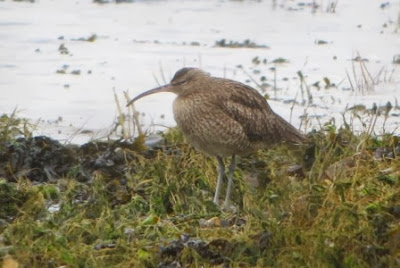 Grey Wagtails, Rock Pipit and wintering Whimbrel at Fishbourne Creek (A. House)
This afternoon I went Easton Lane, Earnley and had two surprises - firstly a pair of Ravens appeared cronking their way through the huge mixed corvid flock and settled in a field of their own near Ham Farm, and secondly there was a huge flock of Stock Doves (estimated at 3-400 birds) that came up with the crows. It has been a few years since I have seen that many together down here (AH).

Pagham Hbr: The 2 Ruddy Shelducks were still present today (per RBA).
Posted by Birderowen at 17:44