Friday, 27th December: Wet and windy again, with strong/gale south-westerlies and heavy showers. Yours truly will be away for the weekend so Andy House will be running the blog for the next two days - all reports to him please.

Sarah Russell reports...I walked a stretch of the Canal this morning, it was relatively sheltered and not too muddy.  Two Grey Wagtails, a Little Grebe, 27 Goldfinch, and 28 Long-tailed Tits in two flocks were the highlights.  Stopped off at Ferry Pool between showers and started a bird count but didn't get very far as the wind was determined to take my tripod and the Lesser-brained Motorist was out in force, tooting his horn.  Clearly visible at the back of the pool was one of the Ruddy Shelducks, also c70 Curlew, c80 Shelduck, c38 Shoveler, c100 Wigeon, c18 Canada Geese, c20 Black-headed Gulls and 4 Great Black-backed Gulls (SR).

Ivan Lang reported an odd summer-plumaged 'Golden Plover' amongst a flock of regular w/plum Golden Plovers at Church Norton. Unfortunately it was not possible to confirm the exact identity of this bird (apparently it looked a bit short-tailed and the axillaries were not fully seen but may or may not have been white) as the flock kept flying around and then the s/plum bird disappeared. It may be worth checking out in coming days.... note that nothing is yet being claimed!  Ivan's report herewith...
The highlight of the morning was a return of the wintering Avocets with 23 in the centre channel. Good numbers of waders are now in the harbour with at 600 Knot, 1500-2000 Lapwing, 1800 Dunlin and 700 Golden Plover. Within the flock of the Golden Plover one individual stood out as it was in almost full summer plumage, which invoked the interest of a few birders; on further observation the bird seemed to have darker underwings than expected from Golden Plover and shorter tail, it was also having a bit of a hard time from the other plovers. Unfortunately, after the flock was disturbed a few times the bird disappeared. so it would be worth checking out the Golden Plover flock to see if it is more than a European Golden Plover (IL) 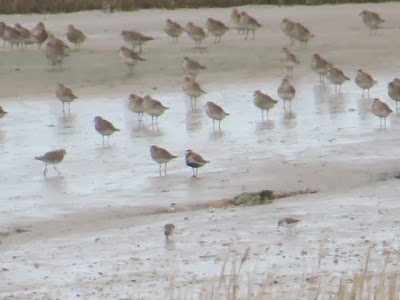 Pagham Hbr: Church Norton: One (and possibly two) Long-tailed Duck offshore, along with 3 Eider and 10 Red-breasted Mergansers. Along the spit, a few Skylarks and Linnets, a beautifully showy Kingfisher on the old harbour mouth, a pair of Goldeneye in the actual harbour mouth and the Peregrine on its island. The harbour was teeming with life in the winter sun, but I couldn't find much else out of the ordinary. Around the churchyard there were 2 Song Thrushes, 2 Great Spotted Woodpeckers and 40+ Goldfinches (AH)

Back to Church Norton this afternoon - biggest surprise was a flock of five redhead Goosanders that cruised into the harbour and down the central channel. Also there were 3 Long-tailed Ducks together on the sea and a single Slavonian Grebe and Guillemot offshore, too, but otherwise not much different to this morning (AH). 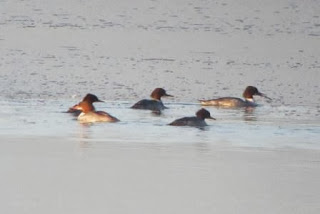 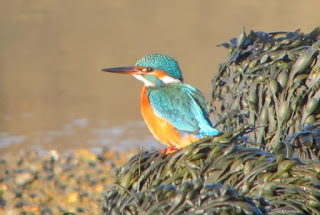 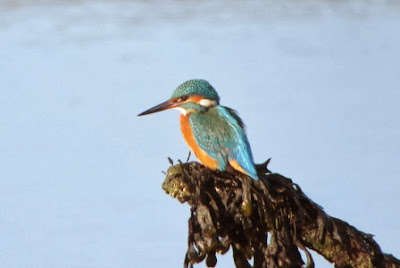 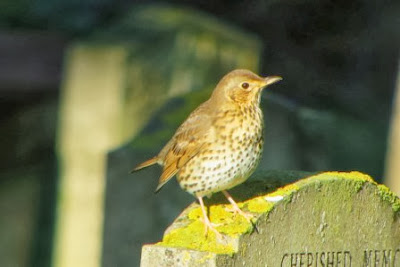 Redhead Goosanders, the showy Kingfisher and a Song Thrush, Church Norton (A. House)


Christmas Day, Wednesday, 25th December: A very merry Christmas to all and best wishes for a bird-filled new year. Brighter, drier and a bit cooler this morning with welcome glimpses of sun, so let us all enjoy the moment, even if the forecast is for the weather to go downhill again shortly. Once again apologies for late news yesterday, due to technical problems beyond my control (blame BT!)

A late report from yesterday from Ian Pitts.... I did undertake a very soggy walk from Selsey to Church Norton between midday and 2pm with actually little to report (I would have been better off sending you some from recent weeks, I have made a mental note to send these in future after each walk). The best sightings were 3 Eider (all females) and a Guillemot offshore, together with the usual R B Mergansers. Also at Park Farm as I reached home a Grey Wagtail flew overhead calling (IP).

At Church Norton, 3 Eider and 6 Red-Breasted Mergansers offshore and 100+ Knot and 6 Bar-tailed Godwits amongst the waders on the beach, and the 2 Ruddy Shelduck still on Sidlesham Ferry (AH).
Selsey to Church Norton 10.00rs (SH): A Long-tailed Duck, an Eider, 4 R/b Mergansers, 1 Med Gull and a Kittiwake. 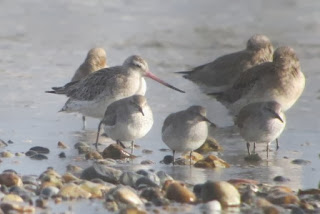 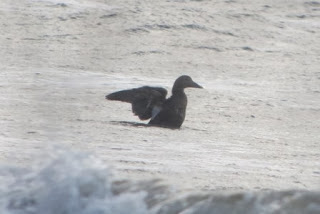 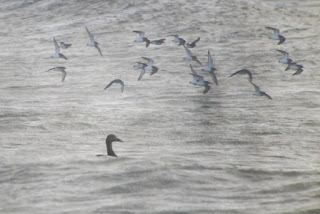 That's it for today.  Happy Christmas again OM.
Posted by Birderowen at 09:08