Tuesday, 24th December: The predicted and prolonged storm arrived with a vengeance yesterday evening, reaching its peak around 0300 today before the wind and rain very slowly began to recede. It was probably one of the most severe winter storms for a good many years, resulting in plenty of disruption this morning. Things had improved considerably by mid-morning with a bit of blue sky and even a hint of sunshine appearing as the wind subsided. Once again the sea was watched for a while, although it was back to normal today with nothing out of the ordinary - perhaps a surprise in itself given the ferocity of the storm.
Apologies for late evening updates and/or any info missed from contributors....... seems BT were working on their system today and broadband was unavailable for lengthy periods.
Selsey Bill 0800 - 1000hrs: Overcast then brighter, wind SW6-7. (Obs: SH/SR/CRJ/AH)
Great Northern Diver - 2 os
Red-throated Diver - 1W, 1os
Great Crested Grebe - 4W
Cormorant - 47W
Gannet - 5W
Brent Goose - 26W
R/b Merganser - 19W, 6 os
Common Scoter - 4 os
Pintail - 2W
Razorbill 1w
Auk  sp. 3w
Sparrowhawk - 1 gardens
Kittiwake - 3W
Pied Wagtail - 1 ob 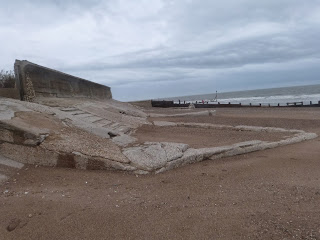 The wall, after the storm (S. Russell)
Sarah comments," the above pic shows how our viewing point looks following the strong tides. The shingle has been sucked away, revealing an earlier garden wall and the area now resembles an archeological site."

Pagham Hbr: The North Fields are flooded and footpaths are only passable with good Wellington boots. Viewed from the North Wall were 1400 Lapwing, 660 Wigeon, 80  Black-tailed Godwits, 23 Redshank, 21 Moorhen and 34 Canada Geese. Happy Christmas. Jim Weston
Church Norton: A Firecrest and a Treecreeper amongst a big mixed flock of Goldcrests and Blue and Great Tits at the bottom of the path from the car-park, and offshore a close-in Black-throated Diver, 3 or 4 Eider, a dozen Red-breasted Mergansers and a couple of Mediterranean Gulls.
Ferry Pool: The two Ruddy Shelduck present this morning among 126 Common Shelduck and 35 Shoveler (AH). 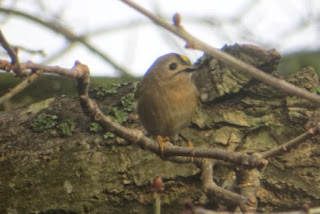 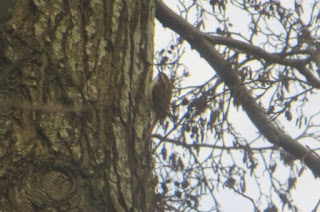 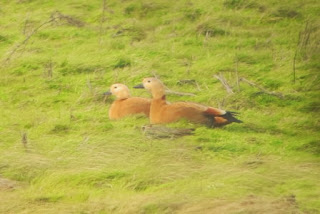 Goldcrest and Treecreeper at Church Norton, and Ruddy Shelducks at Sidlesham Ferry (A. House)

Monday, 23rd December: Overcast and very windy with rain. Once again sea-watching was the only real option and Sam Hill and Andy House braved the weather for three hours this morning, being rewarded for their efforts with a close Balearic Shearwater. Sam reports, "At 0820 I had a distant shearwater west which I thought a Balearic, then at 0840 a definite Balearic flew west at about half mile distance, Andrew joined me shortly after, he then picked up the shearwater sat on the sea within 100 yds of the shore, it then drifted past in front of us; a few record shots taken." 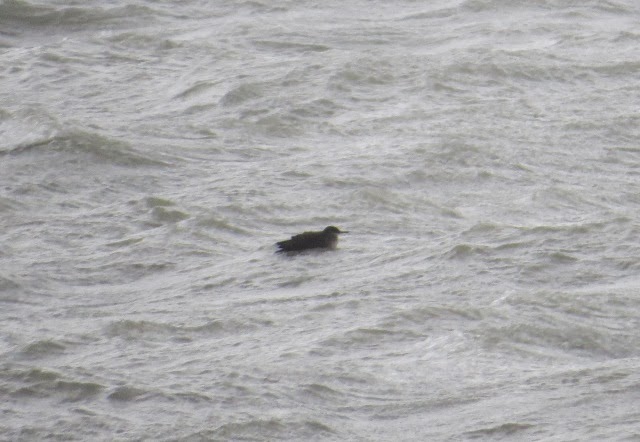 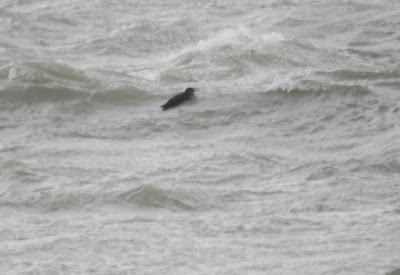 Record shots of a Balearic Shearwater off the Bill this morning (two above - Sam Hill, below - Andy House) 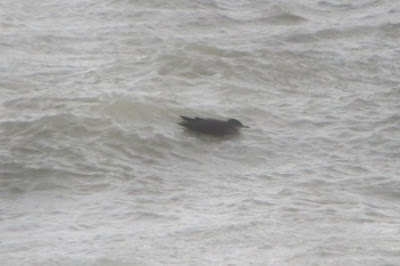 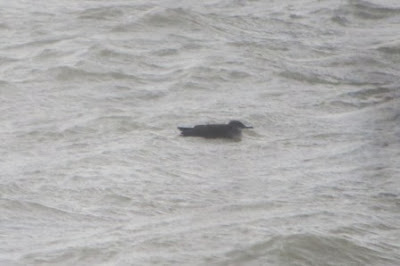