Tuesday, 10th December: Dry and mild again with sunshine and cloud. Wind light S2.
The milder weather and high pressure is forecast to last for the rest of this week.


Pagham Hbr: North Wall: Beautiful weather, but not much to report - about 900 Brent Geese in the fields, with quite a few youngsters amongst them, 300 Wigeon and 100 Curlew also, each in their separate field! One Snipe and a few Wigeon and Teal on the Breech Pool and a few Black-tailed Godwits in White's Creek was about it (AH).


Chi G Pits: Again, not much to report - reasonable numbers of Gadwall and Pochard about on both the Ivy Lake complex and Drayton Pits, and at the latter a few Teal, Wigeon and Shoveler, and a couple of Snipe, and a huge mixed flock of Goldcrests, Long-tailed, Blue and Great Tits (AH). 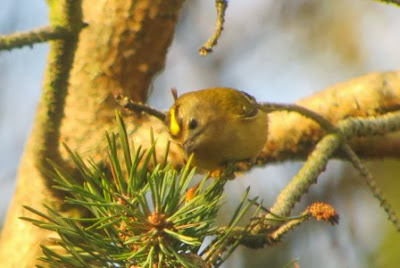 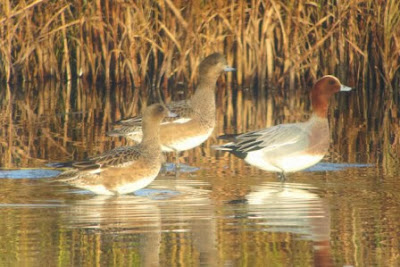 Goldcrest and Wigeon at Chi G Pits (Andy House).
A nice bit of variety to report from the Worthing contingent, as follows:
"Spent all day around the Peninsula with our first birding stop at Medmerry Beach although we found little of note except 200 Brent Geese, 40 distant Golden Plover and single Stonechat. Church Norton produced a lovely Firecrest in the bushes on the path towards the inner beach. Offshore not as exciting as last week with approx 12 Slavonian Grebes, a single Goosander and 3 Long-tailed Ducks, plus 12 Red-breasted Mergansers and 3 Red-throated Divers moving back and forth.
Dell Quay and Fishbourne; 6 Spotted Redshank feeding in a tight flock together with 4 Greenshank and at last a wintering Whimbrel. In the car park by Apuldram Church 2 Firecrests, 2 Chiffchaffs, a Green Woodpecker and 5 Yellowhammer. In Fishbourne Creek 3 Rock Pipits, a Grey Wagtail and a Jack Snipe. At Drayton Pit (Chi GP) by the A259 (opposite the garden centre) we had a Bittern fly over the pit from the north side." (Bernie Forbes, Dave Smith & Dorian Mason)﻿

Monday, 9th December: Dry, mainly sunny and quite mild, with very light wind, SW2. A decidedly calm day with a flat sea, but the glare made viewing conditions quite difficult at times.

Selsey Bill: Spent an hour looking without success for the Parakeet. Nothing moving offshore, but there were 2 Slavonian Grebes, 3 Red-throated Divers, 2 Great Northern Divers, 2 Common Scoter, 6 Great Crested Grebes and about 20 Red-breasted Mergansers on the sea (Obs: AH).

Pagham Hbr: Church Norton: All five Long-tailed Ducks were offshore again, along with a dozen Slavonian Grebes, 3 Common Scoter and a few Great Crested Grebes and Red-breasted Mergansers, though the low tide and light made viewing difficult. There was also a big roost of several hundred Dunlin, with a few Knot, Grey Plover and Bar-tailed Godwits on the exposed shingle on the low tide (AH).  See photos below ................. 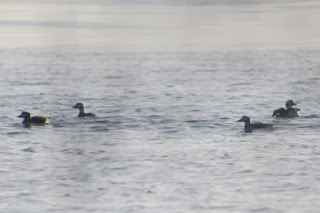 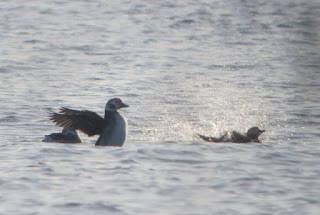 Long-tailed Ducks off Church Norton beach and wader selection at roost (A. House) 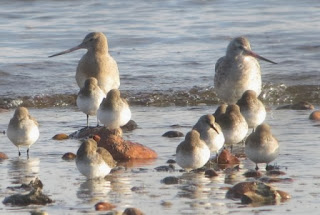 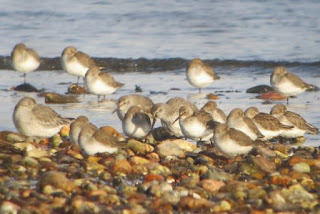 A nice sunny morning with little wind, just right for a bike ride down to the harbour, lots of common birds, but not much unusual. Honer Reservoir  1pr Stonechats...N Wall/Harbour c 1000 Lapwing in the air, and a close Peregrine over the Breech Pool. In the fields c 1000 Wigeon and similar numbers of Brent Geese trying to find winter wheat that wasn’t guarded by scare guns. (CRJ). 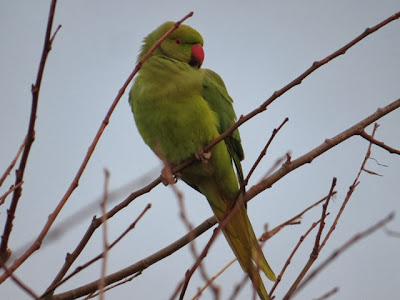 Rose-ringed (Ring-necked) Parakeet, Selsey Bill (Sam Hill)
Medmerry: Sam Hill logged 40 species from the banks, including
Brent Goose - 1000+
Golden Plover - 20
Lapwing - 500+
Green Sandpiper - 1
Peregrine - 1
Merlin - 1
Kestrel - 3
Buzzard - 2
Sparrowhawk -1
Yellowhammer - 8
Reed Bunting - 2
Later, Andy House visited: At the Medmerry/Westfields area I was pleased to find the Little Owl still in residence, but not much else to report bar a big flock of Brent Geese being repeatedly disturbed by the teenage motorcyclists who have discovered the path along the sea-defences . 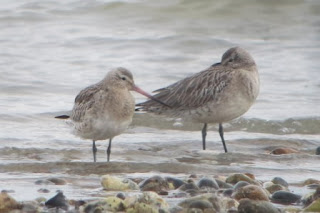 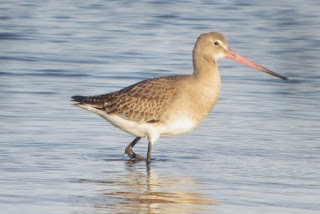 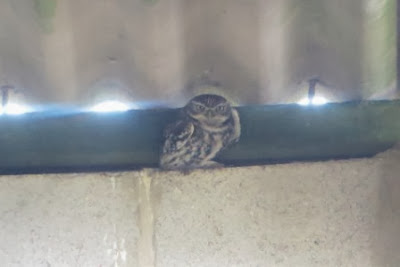