Friday, 12th December: Overnight westerly gales and heavy rain had eased somewhat by dawn, with conditions set to improve for the rest of the day. First news is that an early seawatch at the Bill produced a Pom Skua and 3 Great Northern Divers.....

Church Norton: I made it out for a quick look over the harbour, but there was not a lot going on. Two of the three Spoonbills appeared out of the creeks to settle on Tern Island, the Whimbrel briefly appeared near the bench and there were a couple of Bar-tailed Godwits near the old harbour mouth. Inspired by OM and BFF's efforts yesterday in counting the Knot in the harbour, I did likewise and got to 198 out on the mud, amongst the many Dunlin and Grey Plover. A couple of Jays, a couple of Song Thrushes and a couple of Goldcrests were the only birds of note about the bushes. (AH)
(Glad to see they can't keep a good man down Andy...!) (OM). 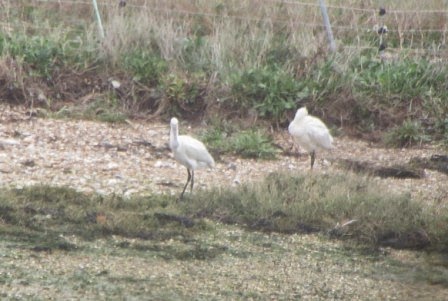 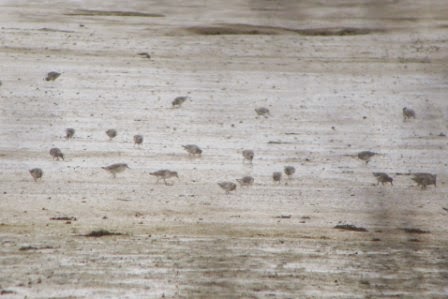 Ferry Pool: Nothing out of the ordinary but the pool was worth watching for the sheer numbers of birds present, the noisy flock of Lapwing being particularly impressive as they gathered at the waters' edge.  Large numbers also of Teal, Wigeon, and Shelduck, 17 Shoveler, 26 Curlew, 1 Grey Heron, and a single Snipe in the waterlogged field.  A Kestrel hunting right at the edge of the road just above the oncoming cars later caused consternation when it hovered close to the Visitor Centre feeders.
A Kingfisher was in the channel alongside the cycle track (back left of visitor centre), and 4 Black-tailed Godwits were at the sluice along with a Grey Wagtail (SR).
The 2 Ruddy Shelduck were present during the high-tide roost (C&ME).

Medmerry: Ham: The Southern Pochard was still at the long pool this afternoon, whilst the Brent Goose flock on the fields near Ham Lane contained the Barnacle Goose (BI).

Thursday, 11th December: A fairly bright start with sunshine and cloud, but also a strong W wind gusting to near gale force, producing a very rough sea. Increasing cloud and a few showers by afternoon, with a forecast of heavy rain and gales overnight. An hour's sea-watch this morning at the Bill was not productive, but elsewhere the day list included the regular three Spoonbills, a Jack Snipe, a Woodcock and a Firecrest.
Unfortunately though, my esteemed co-editor and regular photographer Andy House is suffering at present with a disc problem, which is causing him great pain and restricted mobility. When we spoke this morning he was still bed-bound and high on painkillers; needless to say he was very frustrated at not being able to get out birding in his usual way and feels it may be a bit of a long job before he is fully fit again. We do hope he is back to his old self soon, but meanwhile it may have a bit of  a knock-on effect with the blog, so please understand if things seem a little slower than usual for a while, though I/we will endeavour to continue getting the news out daily if possible (OM).
There have been no reports of the imm White-fronted Goose amongst the Brent flock on the Peninsula for the last few days and the reason is now clear.... it has been frequenting Climping beach with 1000+ Brents and was there again today (B. Akinola, per Climping website). It is unlikely to roost there though and the flock probably just visits to feed before commuting elsewhere, so it may well re-appear on our patch at any time (OM). 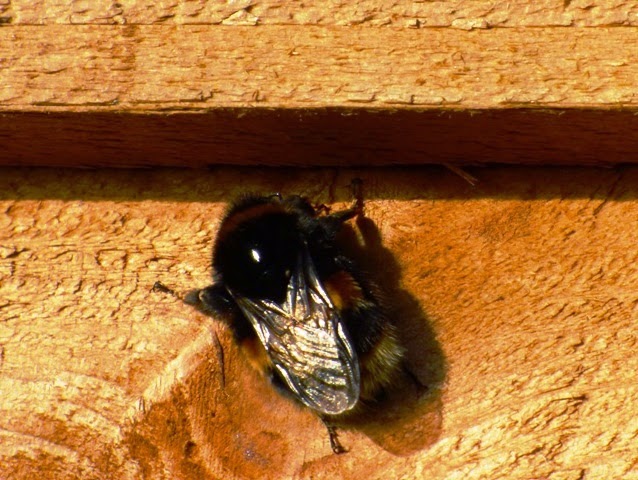 Bumble Bee sp. on the fence at Bill House (OM)

Selsey - Drift Lane area: A Woodcock and a Jack Snipe this morning, plus 16 Common Snipe and a Jay. There was a moment of drama when a Snipe rose, only to be snatched in the air (about 3 metres above ground) by an opportunistic Sparrowhawk. The raptor attempted to fly off with its prey, but the burden became too great and it dropped the Snipe into the marsh; the observers went to check out the poor wader only to see it suddenly rise again and fly off at speed - a lucky bird! (OM/BFF)

Church Norton: The three Spoonbills were once again roosting on Tern island but actually walked around a bit before settling down again! On the mudflats were plenty of Dunlin and Grey Plover (which we didn't count) and 123 Knot and 9 Bar-tailed Godwits (which we did!). A Peregrine was zooming about over the harbour occasionally disturbing everything, and on our walk back to the car park a Firecrest was located in the hedgerow (OM/BFF). 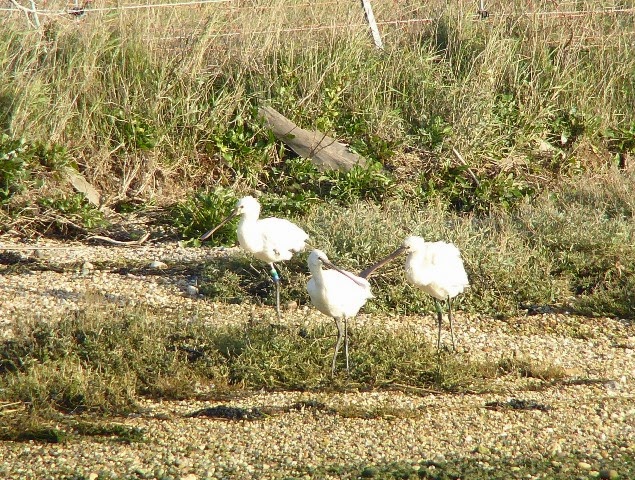 Wednesday, 10th December: The Sussex Bird Report 2013 literally thumped onto my doormat yesterday. Always eagerly anticipated, this year's production by the Sussex Ornithological Society runs to a massive 288 pages and is packed with detailed information on the birds recorded in the county last year; this of course involves many records from the Selsey Peninsula, including official acceptance of some scarce and rare species. The report clearly involves a huge amount of work by a whole group of people and Joanne Chattaway and her editorial team are to commended on their fine and prompt publication. I'm pleased to say that both of your blog editors have contributed in their own small way - AH writing some species accounts and providing photos and yours truly proof-reading and advising - so we both have some idea of just how much team effort is involved to bring about the right result. Which kind of brings me around to this blog (neat, eh!?). This blog is also very much a team effort (I couldn't do it on my own!) and its daily production depends on the efforts of the contributors, most being local to the peninsula. Glancing through the pages of the Sussex Bird Report soon reveals the number of county records that involve our patch; in the case of sea-watching records this is particularly obvious and our thanks go to our log-keeper Justin Atkinson for his detailed and meticulous submissions, but our thanks also go to all who have contributed in whatever way and we hope the blog will continue to be of interest to all visitors to the site (OM). 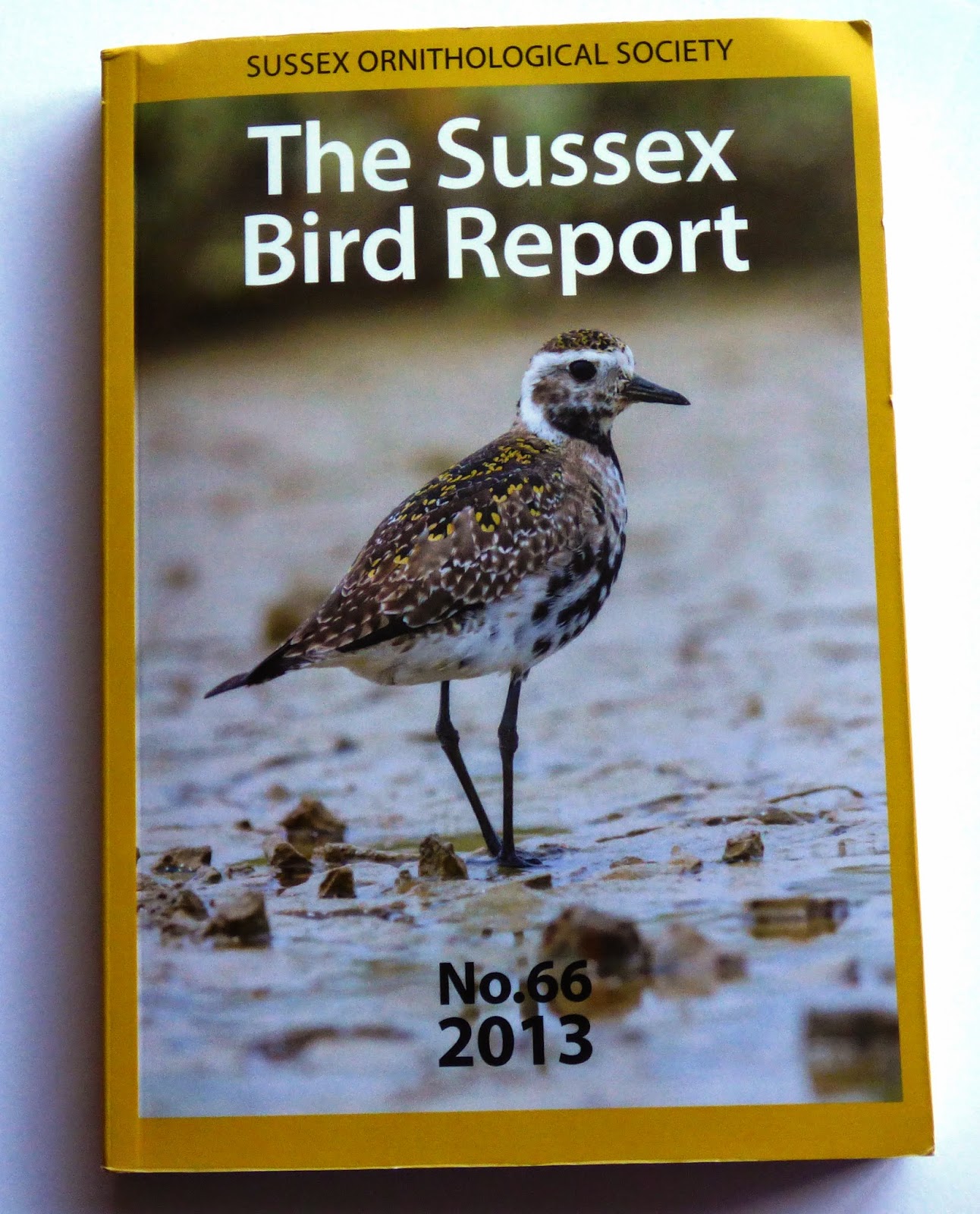 The Sussex Bird Report 2013 (published by the Sussex Ornithological Society) - essential reading for anyone interested in Sussex birds (OM).
After strong winds and some rain overnight, today began dry with sunshine and cloud and a moderate W wind.
North Wall: A look along the wall this morning produced a minimum of 3 Spotted Redshanks, 5 Snipe, 100+ Black-tailed Godwits, a Pintail among many Wigeon and Teal, and hundreds of Lapwings. The lower water level meant the Breach Pool was just heaving with birds this morning.
Out in the harbour the 2 Ruddy Shelduck were amongst 50 Common Shelduck, and a Peregrine was buzzing about putting up all the Lapwing and Golden Plover - a very rough estimate was 2000 of the former and 200 of the latter.
Also ARK reported two Goldeneye and a Pochard on the Lagoon. (AH) 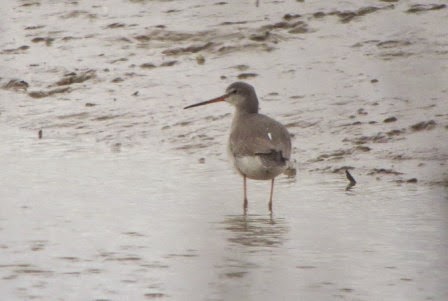 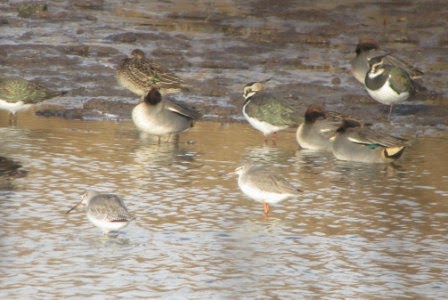 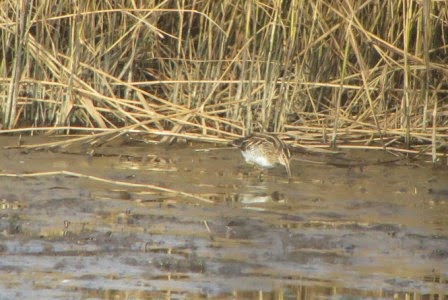 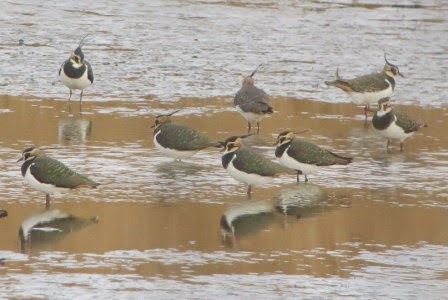 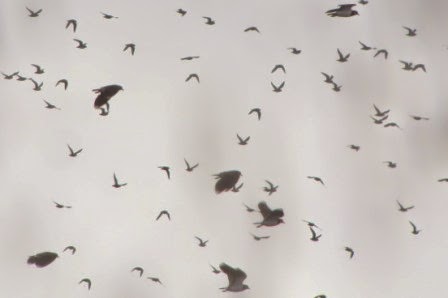 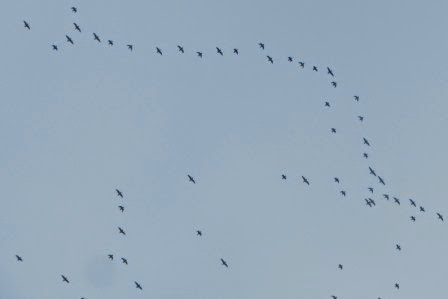 Medmerry: Ham Farm area - The Black Brant was with a big flock of Brent Geese this morning, but no sign of the White-fronted Goose. (AB) 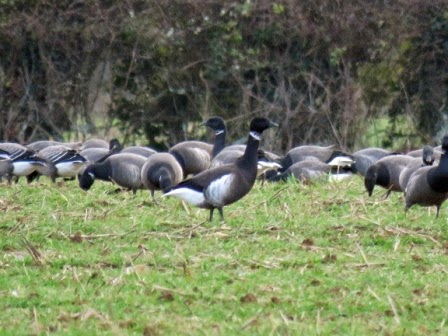 Black Brant at Medmerry (AB)
East Head: The slightly odd-looking Barnacle Goose was amongst many Brent Geese this morning, and a Great Northern Diver flew over east. (AB) 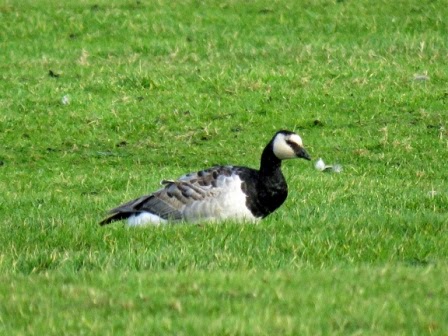 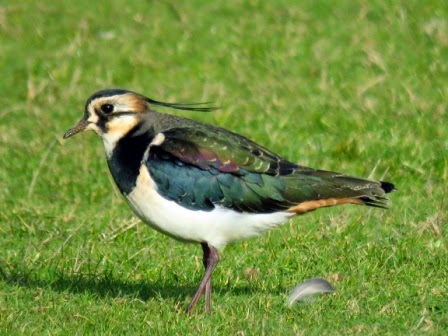