Wednesday, 3rd December: A pleasantly bright start with sunshine and cloud, but with the latter set to increase during the day to give the risk of the odd shower later. Notably cooler than of late with a fairly strong N/NE wind.
Church Norton: The Black Brant was in with 1000+ Brent Geese on the first/last field west of the road into Selsey (where the 'Wave' roundabout is.) In the harbour the 3 Spoonbills were roosting on Tern Island along with the Greenshank and 5 Bar-tailed Godwits. The Whimbrel was down near the bench, 7 Greylag Geese went over east and there were 2 Slavonian Grebes offshore. (AH) (Seems the Brant can now at last validly claim to be on the Selsey list Andy! OM) 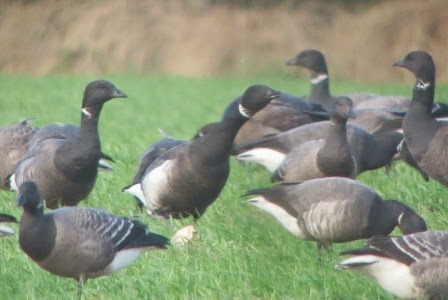 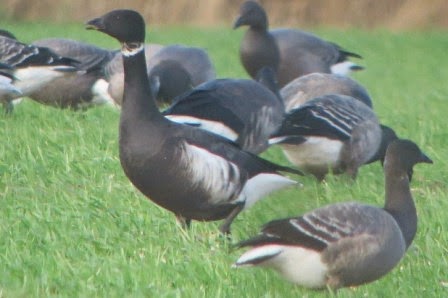 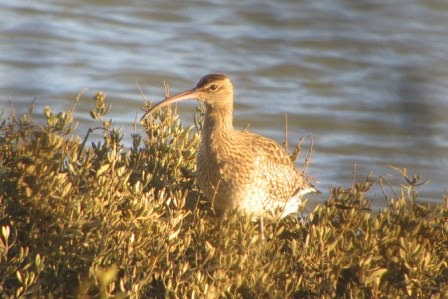 Sidlesham Quay: A Black Redstart present this morning. (JDW)
Ferry Pool: One Ruddy Shelduck with 25 Shelduck on the pool, along with 30 Shoveler, 20 Teal, 80 Wigeon, 8 Black-tailed Godwits and c500 Lapwing. (AH) 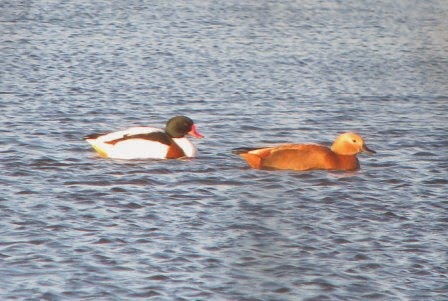 Common and Ruddy Shelduck (above), Shoveler & Lapwing on the Ferry (AH) 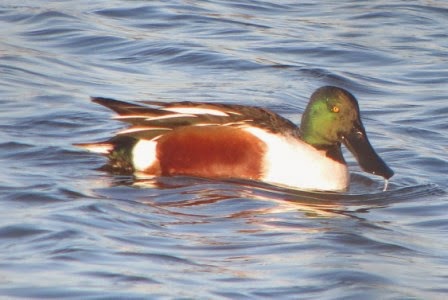 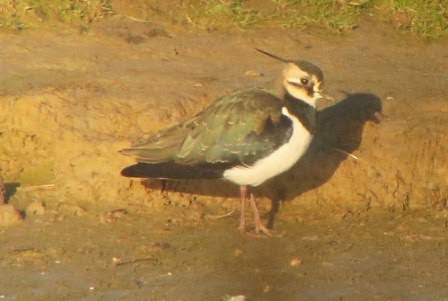 North Wall & North Fields: A considerable drop in water level on the Breach Pool; it was nevertheless host to 170 Teal, 56 Wigeon, 1 Gadwall, 47 Black-tailed Godwits and 2 Snipe. (JDW)
Honer Reservoir held 6 Coots, 2 Little Grebes and 31 Black-headed Gulls. There were 21 Yellowhammers at this location, too. In nearby Honer Field there were 460 Brent Geese and 70 Curlew, whilst 36 Coots were on Pagham Rife. (JDW) 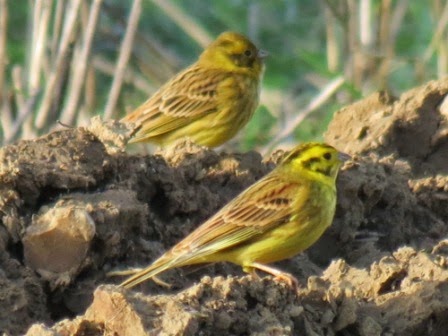 Yellowhammers (above) & Brent Geese and Curlews on the North Fields (JW) 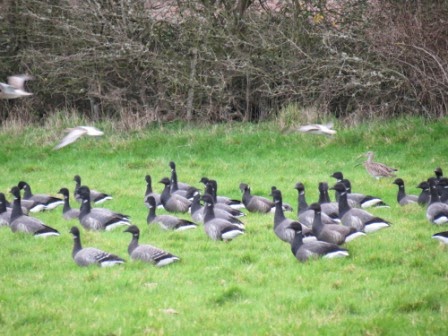 Medmerry: West Sands Viewpoint: A Black Redstart on the rough ground along with 2 Stonechats,  9 Meadow Pipits and a Kestrel.  In the reserve itself there was very little on the rapidly rising tide this afternoon, c200 Brent Geese, 34 Dunlin, 11 Ringed Plover, 7 Curlew, c50 Wigeon, 14 Little Egrets (SR).
Ham area: A Southern Pochard seen on borrowes pit SE of two-toned grey barn at end of Ham Lane, whilst cycling yesterday . Came back today to photograph. I know it's not a wild bird but looks good in this wild setting! (Krys Furlepa). 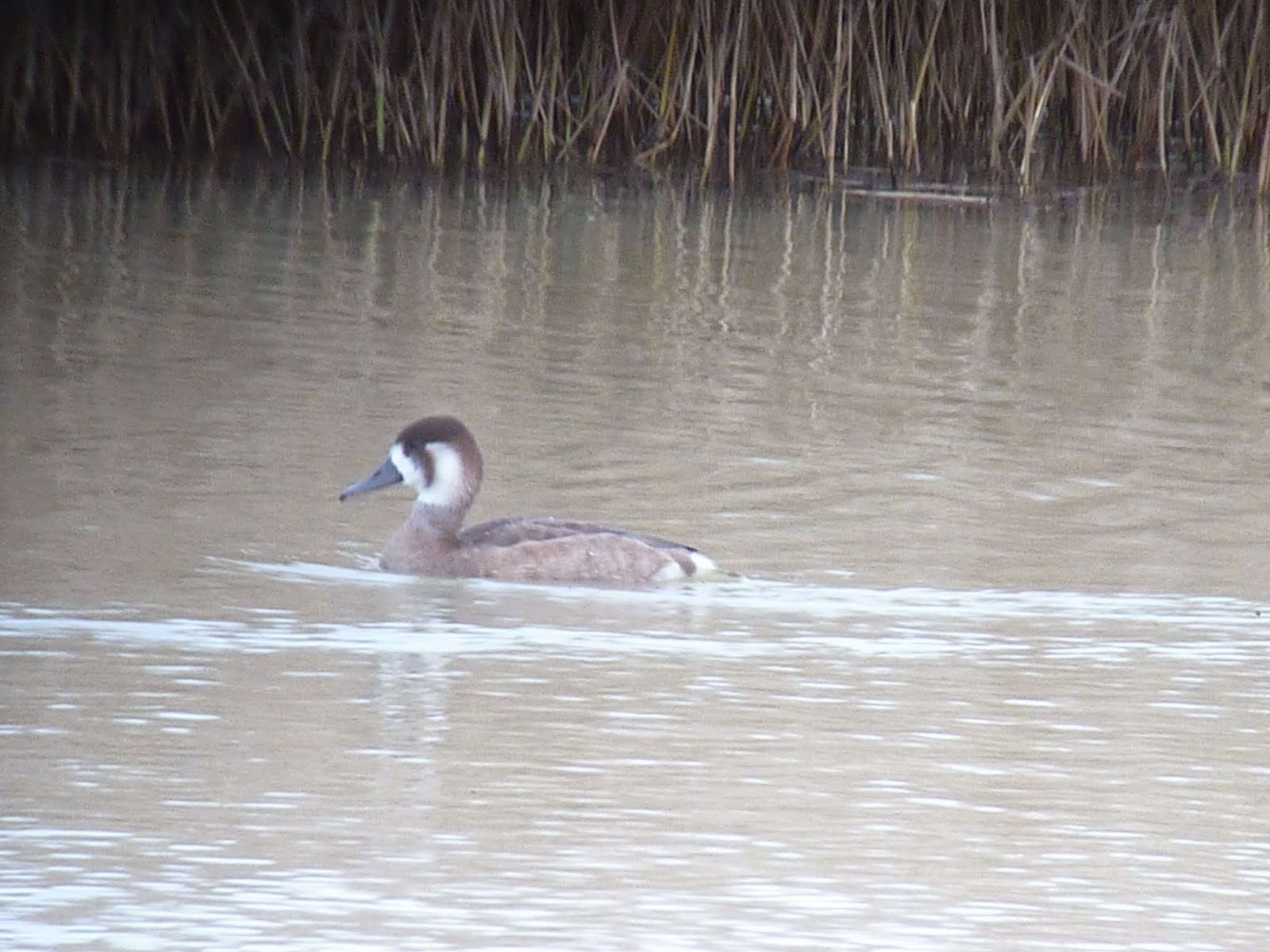 Tuesday, 2nd December: Another gloomy grey day, with a chill northerly breeze picking up during the morning from a flat-calm start.....  predictably, birding highlights were few but included a Black Brant and a Pale-bellied amongst the dark-bellied Brent Goose flock near Church Norton, 9 Slavonian Grebes and the Spoonbill trio.


Selsey Bill (0730-0900hrs}: I arrived on a grey, drizzly, surprisingly calm and fairly cheerless morning whilst it was still dark; apart from a Chiffchaff in Bill House garden and a Little Egret flying over there was precious little to lift the spirits except the festively-lit Bill House tower. I was soon joined by DF but there was no improvement ... not a diver or merganser could we find in an hour and a half and there was nothing moving except a few Brent Geese (18E & 5W), and 2 Great Crested Grebes and 4 Teal east. Just five species in the log.... time to move on! (OM/DF) 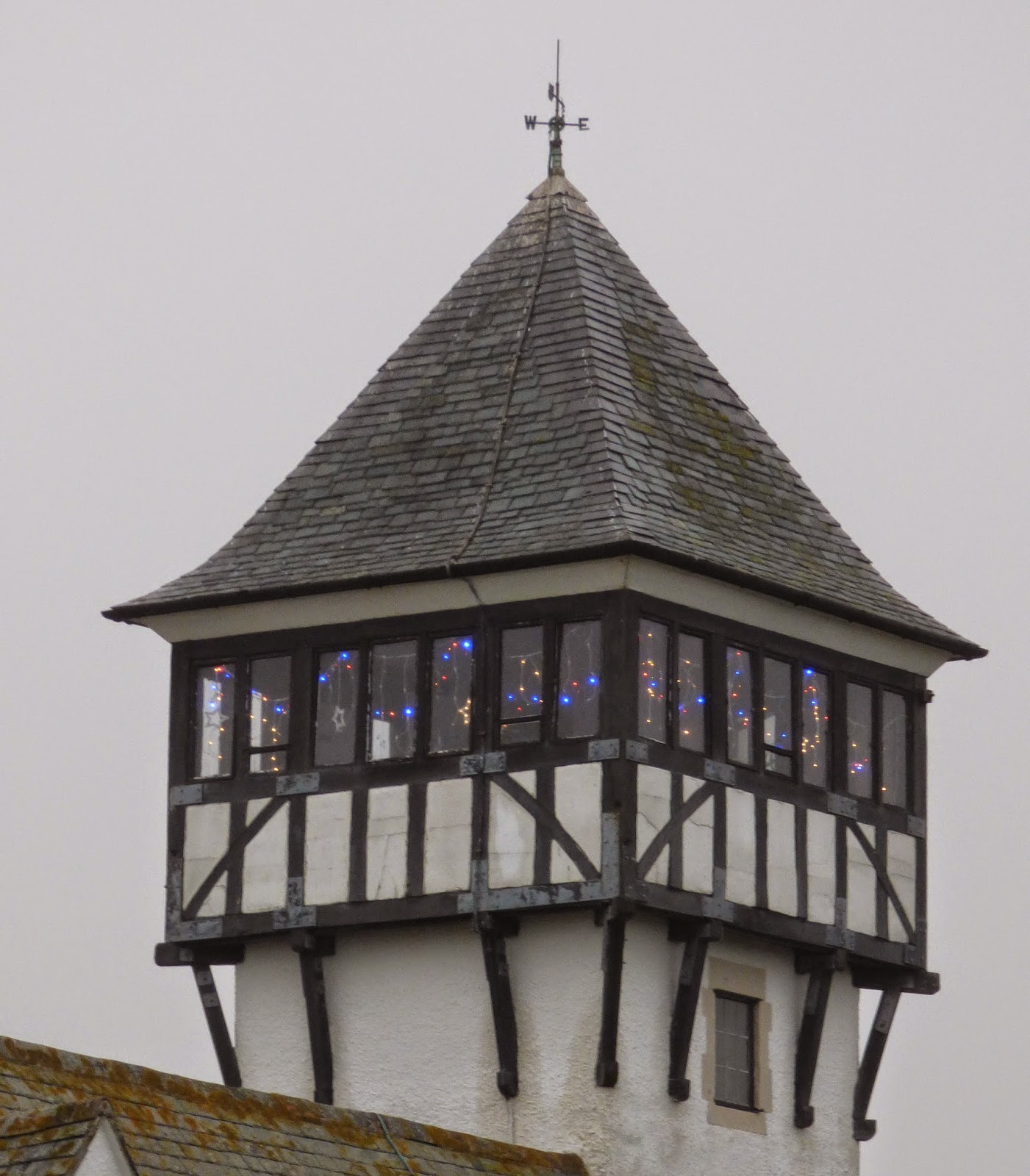 
Church Norton: I had a good look through the 1500+ Brent Geese in the fields between the Nature's Way complex and Grange Lane, looking for the elusive grey goose, which I failed to find - but I did uncover a Black Brant and a Pale-bellied Brent Goose lurking within the flock. (AH) 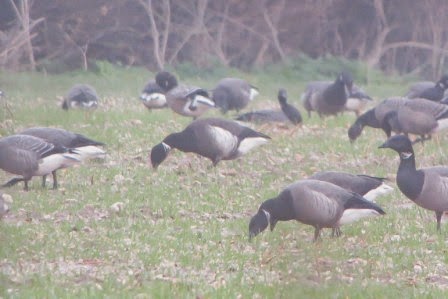 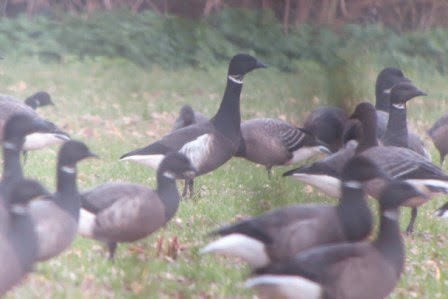 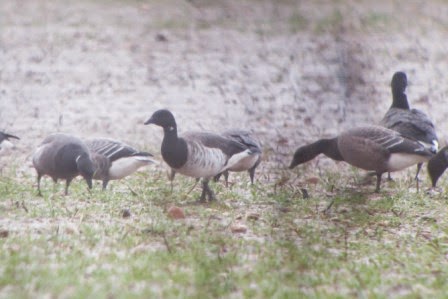 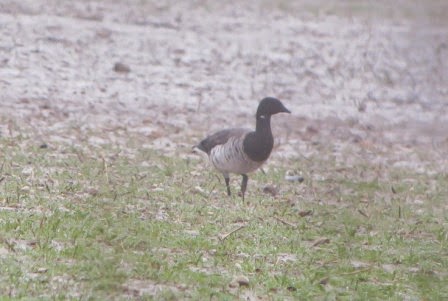 Meanwhile, at the harbour there were 9 Slavonian Grebes offshore from the spit this morning (per DF) - the first of the autumn here, the 3 Spoonbills were snoozing on Tern Island and the Greenshank was still in the creek opposite the horse's field. (AH) 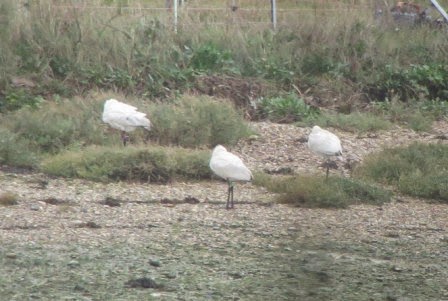 Spoonbills on Tern Island (AH)
Selsey area:  Drift Lane Marsh - There was a Woodcock again this morning, along with an impressive count of 22 Snipe. Two Roe Deer were also present, nervously keeping an eye on me in the murky conditions. Northcommon Farm was notably quiet however with just a couple of Goldcrests in the hedgerows and a large flock of 75 Curlew feeding on a flooded playing field. (OM) 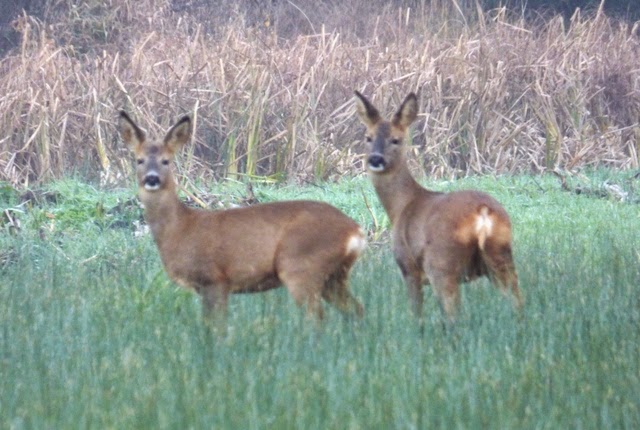 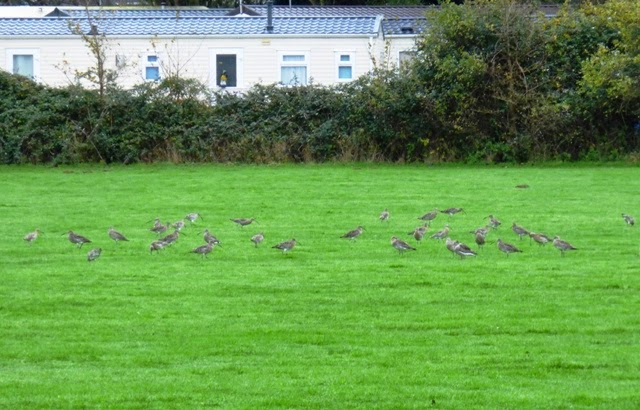 
Church Norton: A quick look this morning produced the three Spoonbills feeding together near Tern Island, the Whimbrel in the harbour and two Redwings near the Mound. Also about 1000 Brent Geese on Rectory Lane, but not a grey goose in sight! (AH) 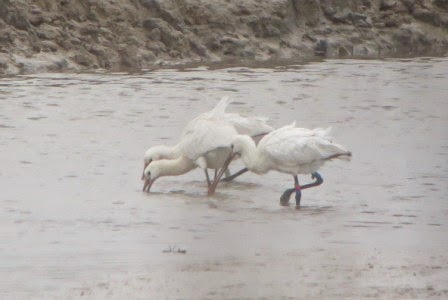 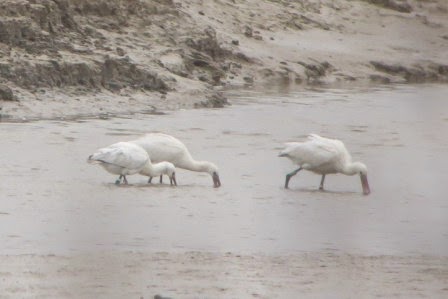 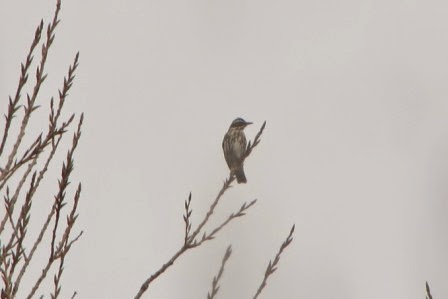 Sidlesham: An equally quick look along our lane produced a Bullfinch, two Mistle Thrushes, two Jays and a dozen Goldfinches. (AH)
Posted by Birderowen at 08:09