Long Pool: No sign of any grey geese this morning, though there was a Kingfisher by the sluice and a Buzzard in the fields. (CRJ/TR)


Ferry Pool: There were 2 Ruddy Shelduck, 700 Lapwing and a Kestrel present, and 15 Avocet flew in to the pool overhead from the harbour. A small flock of Canada Geese lifted off the Ferry Pool and flew towards the North Wall and there appeared to be a grey goose at the back but views were poor and we couldn’t be sure. (CRJ/TR)

Selsey: Chainbridge Field: 30 Golden Plovers were all we could find in poor conditions. (CRJ/TR)

Wednesday, 17th December: A grey, damp and gloomy day, but very mild for the time of year....


First of all a bit of news from SR regarding the Spoonbill, ringed Green V094 - I've had a speedy reply from the Copenhagen Bird Ringing Group. From what I can tell it was ringed in Nibe, Denmark on the 15th May 2014 and is approximately 1 year old. On the 4th October it was spotted in Germany on a large stretch of wetland known as Holter Hammrich, part of the Ostrhauder Fehn, where it was again reported on the 16th of that month.


Long Pool: As I walked back from a birdless look along the pool late this afternoon a solitary grey goose dropped in on the boundary between the ploughed and cropped fields south of the path. It was very late (3.45pm) and I only had binoculars, but I am pretty certain it was a Bean Goose. The picture below is no help at all, but it did appear to have orange legs, it was generally a 'dark' bird (and in flight), but the bill was difficult to determine, though it didn't appear pink and the belly was dark (cf juv White-front). Hopefully it will still be there in the morning and a better view can be had. (AH) 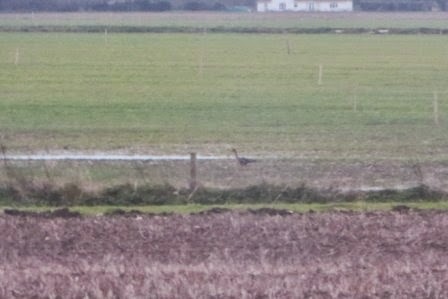 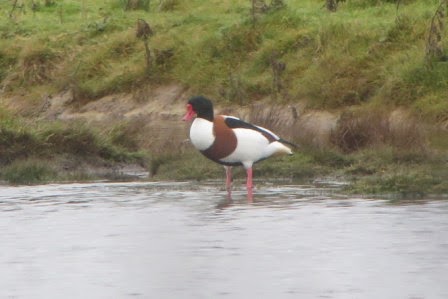 Shelducks on the Ferry (AH) 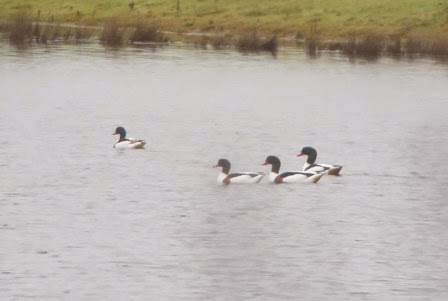 East Head / West Wittering: Three Spoonbills, all apparently unringed, were seen on an RSPB outing today (per SOS website)... if I understand correctly the birds were probably on Snowhill marsh (OM).
Tuesday, 16th December: A dismally grey and foggy start gave way to a pleasant day.....


Church Norton: Took a walk around this afternoon and came across two of the Spoonbills, Green V094 and companion. This is the first time I've seen them awake and feeding! They seemed to be finding assorted flat fish and crustaceans and appeared very relaxed. Also of note were 3 Goldeneye and 12 Red-breasted Mergansers. (SR) 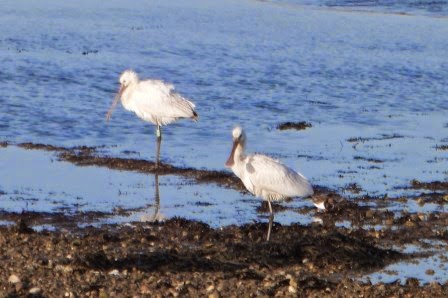 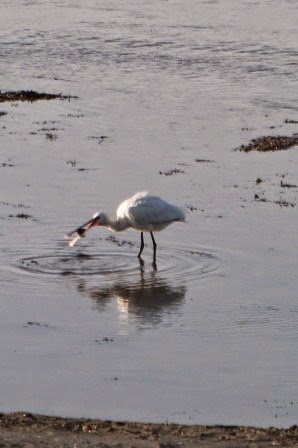 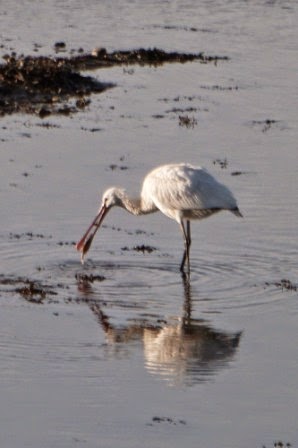 Medmerry: West Sands to the breach - Fairly quiet here this afternoon, though a Greenshank dropping in was a surprise. On the pools there were 5 Curlew, c20 Grey Plover, c40 Dunlin, c20 Golden Plover, c100 Lapwing, c30 Teal and c25 Shelduck, whilst offshore there were as many as 40 Common Scoter and 4 Great Crested Grebes, and a couple of Buzzards and 20+ Skylarks were out in the fields. (AH) 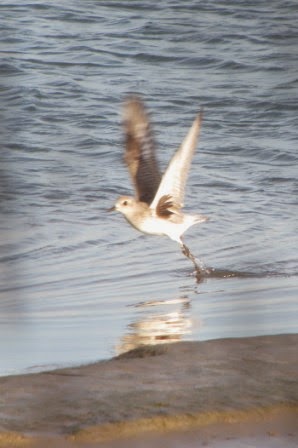 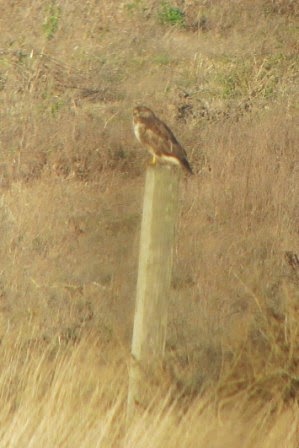 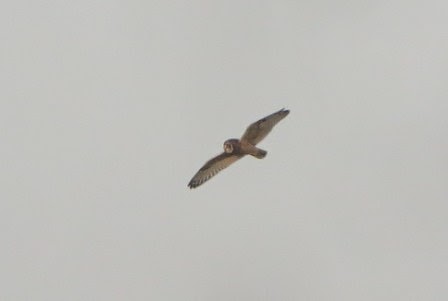