Wednesday, 31st December: A grey, gloomy start with a moderate south-westerly wind....which was decidedly chilly on the coast. And as 2014 draws to a close Andy and I wish everyone a VERY HAPPY AND BIRD-FILLED NEW YEAR (OM). 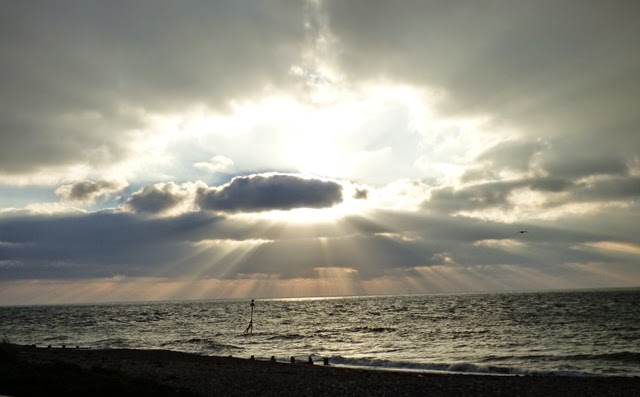 At the Bill this morning; above - a bit of divine intervention.? ...(if so it didn't make for easy counting of distant birds) and below - JA and SH in action logging auks (Sam is not asleep just using his phone!)(OM) 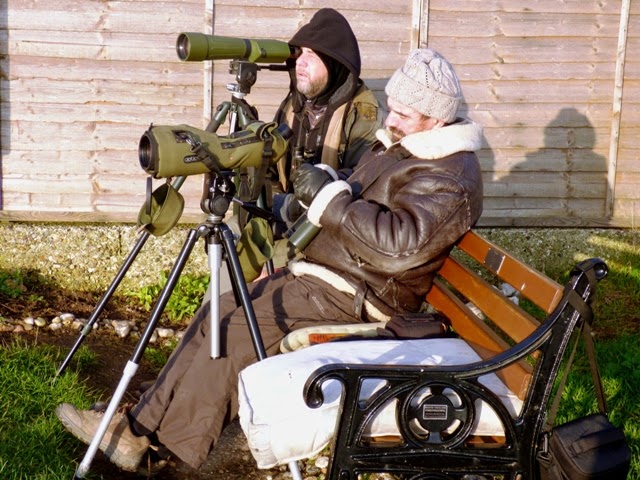 Church Norton: The Green Sandpiper was still around Park Farm,  the two Ruddy Shelduck were in the harbour, a drake Goosander was in the channel off Tern Island along with a dozen Red-breasted Mergansers and four Stonechats along the front. (S&SaH) Also 15 Avocets were off the end of the Long Pool. (KF) A single Slavonian Grebe and 6 Great Crested Grebes were offshore (OM/SR)

Honer Farm and Reservoir: No sign of the usual two Whooper Swans this winter as far as I know, but a flock of 41 Mutes on the South Mundham fields. On the reservoir 49 Black-headed Gulls, 4 Common Gulls, 3 Mediterranean Gulls, 4 Coot and a pair of Gadwall. Also present were a Stonechat and 5 Meadow Pipit. Not much else to report except for a couple of Kestrel and a flock of c750 Brent Geese up over Marsh Farm. (CRJ)
Ferry Pool: The Bean Goose was not on the field, but I am pretty certain it flew over with a flock of Brent Geese that came in from the west and went off over the harbour. There were many less Brent Geese than yesterday, though the Canada and two Greylag Geese were still present, along with 300 Wigeon, 40 Shoveler, 100+ Black-tailed Godwit and 500 Lapwing. Also a Cetti's Warbler was in the reeds by the road, and 5 rey partridges flew into the nearby arable fields from the west side, where shooting was taking place. (AH)

Pagham Spit and Lagoon: There was a total of 9 Goldeneye (3 drakes}; five on the lagoon and four in the harbour mouth channel, where 7 Red-breasted Mergansers were also present and at least one Spoonbill was feeding. A Chiffchaff was in the small bushes near the hide (OM).
Fishbourne Creek: Highlight of an interesting morning were three Spoonbills dropping into the creek before going back out into the main channel - they were all 1st-winters and unringed, presumably the birds from Snowhill Creek.
Other highlights included a male Marsh Harrier over, 3 Goldeneye in the channel, about 6 Spotted Redshank and 5 Greenshank spread about the area, a Whimbrel in the same area as one previously wintered near the boatyard, two pairs of Stonechats and about half a dozen Rock Pipits.
There were a few Common Gulls and a Lesser Black-backed Gull about, 100+ Black-tailed and a few Bar-tailed Godwits, masses of the commoner waders and probably 2000 Brent Geese, though flocks were coming and going all morning. (AH/KF) 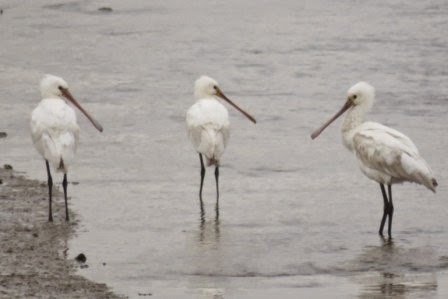 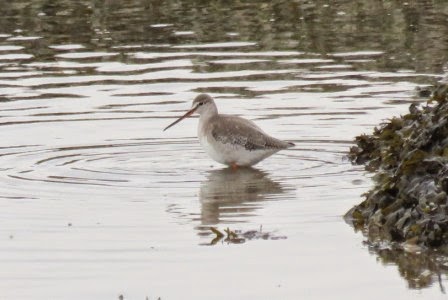 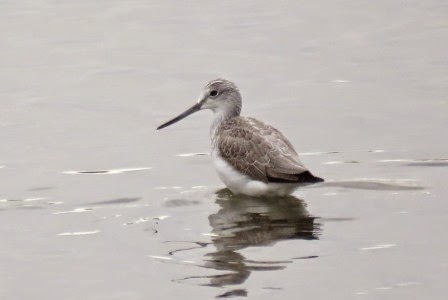 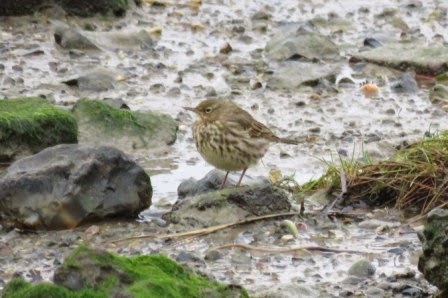 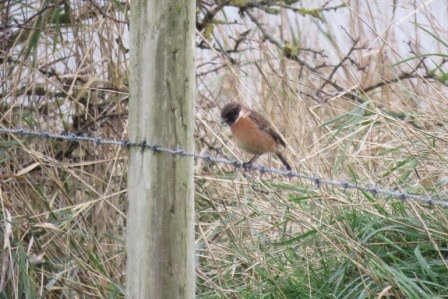 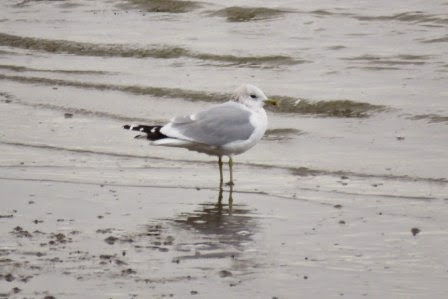 Birdham: There were c80 Golden Plover, c40 Lapwing and c200 Brent Geese in the arable field just south of Cowdry Farm, along the Birdham straight this morning. (AH)
Tuesday, 30th December: A bright, cold start with heavy frost quickly gave way to a cloudy but still day. Bird-wise the Tundra Bean Goose was still present at the Ferry and there were some hints of a bit of hard-weather movement with wildfowl numbers beginning to increase and a handful of divers off the Bill....


Selsey - Drift Lane area: A Woodcock flushed from a bit of frozen marsh and showed well although briefly, and there was at least one Jack Snipe and 15 Common Snipe this morning, plus a Great Spotted Woodpecker, whilst nearby c.100 Curlew were feeding in a damp field behind the old Coastguard cottages (OM),

Ferry Pool: The Tundra Bean Goose was still present on the fields this morning in the company of 2 Greylag Geese, about 60 Canada Geese and 300 Brent Geese. (It seems to show quite a lot of orange on the bill for Tundra, but its size and structure would seem to support this conclusion - see pics below).
There were also 120 Black-tailed Godwits, 20-30 Curlew and many hundreds of Lapwing on the fields and at least 300 Wigeon and 40 Shoveler on the pool. Also, a Water Rail was lurking in the roadside reedbed. (AH/BI) 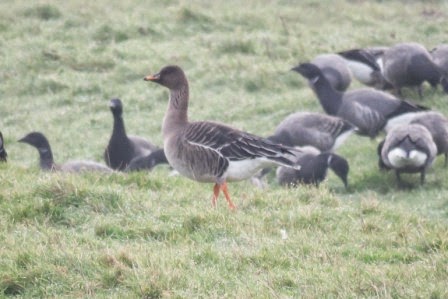 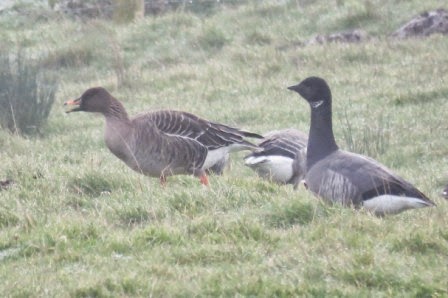 Tundra Bean Goose with Brent Geese (above), with Greylag Goose, Black-tailed Godwits & Wigeon and Shoveler on the Ferry (AH) 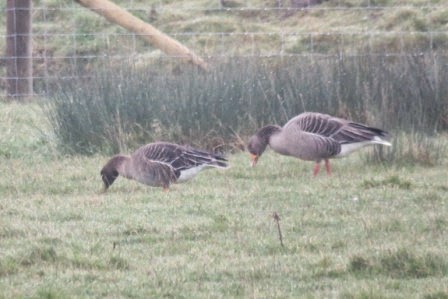 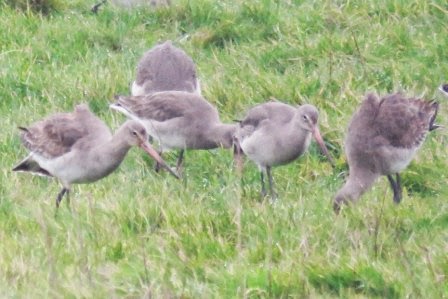 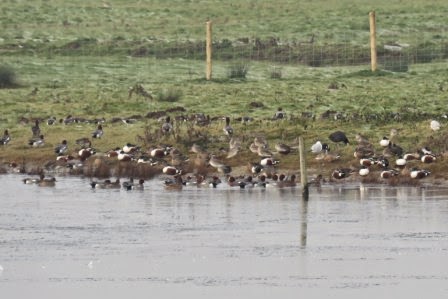 Church Norton: A male Brambling was in the hedge at the back of the field before the harbour, but little else of note. (A&YF)
Three Goosander - two males and a female - were off the beach early this afternoon. (BI) 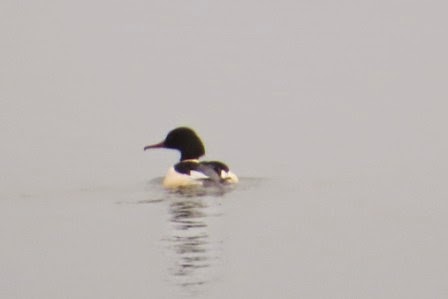 Goosander off Church Norton (BI)
No joy with the Goosanders later in the afternoon, but the three Spoonbills were performing well in the channel beside the spit. The only birds on a flat calm sea were a Guillemot and two Great Crested Grebes, and there was not much else out of the ordinary in the harbour, though a drake Red-breasted Merganser was in the harbour mouth. (AH) 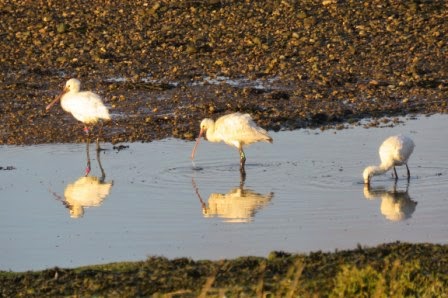 All three Spoonbills together (above) & separately at Church Norton (AH) 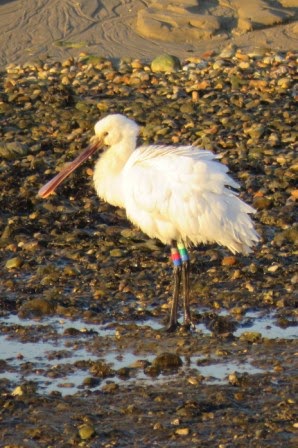 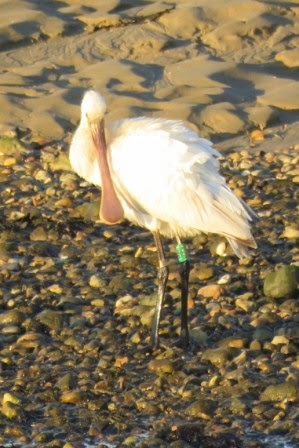 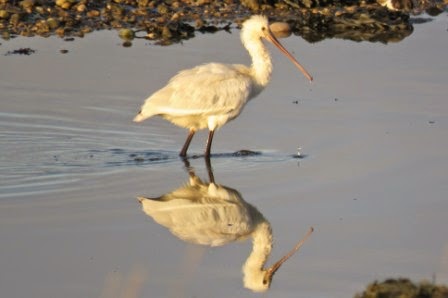 Medmerry: Chainbridge to Ham viewpoint - There were 1000 plus Brent Geese at Ham Farm, and the Southern Pochard was still on the long pool. Also present were a Chiffchaff, a few Yellowhammers, a pair of Stonechats and a few Skylarks and Meadow Pipits around the sluice. (BI) 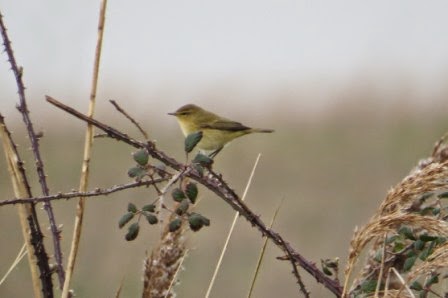 
Chainbridge Field: A Short-eared Owl was out and about in the mist at dusk (SR). 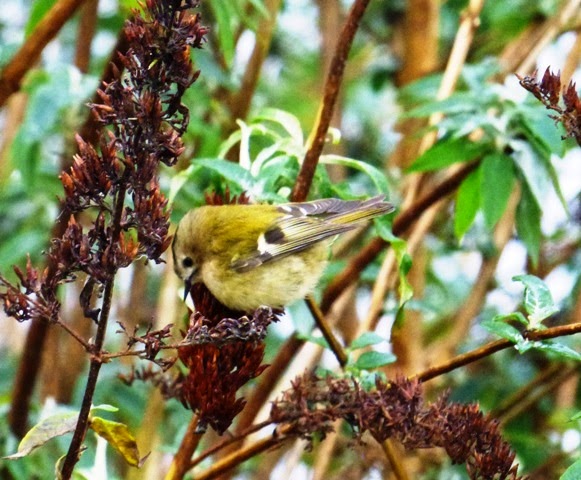 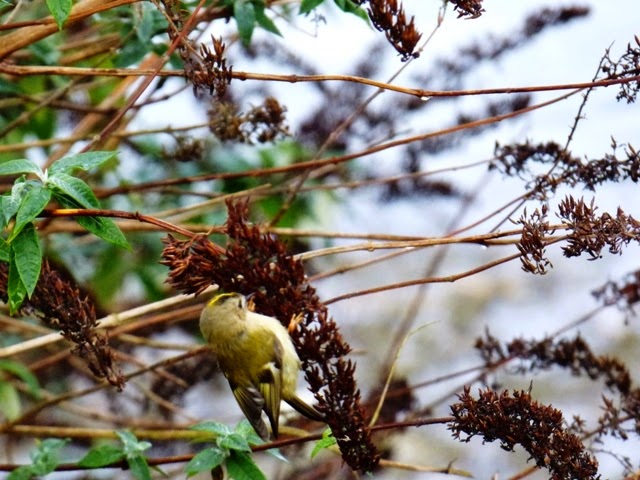 Goldcrests at Drayton GP (OM)
A check of Ivy Lake and Westhampnett pits failed to produce anything of significance and certainly no sign of any cold-weather scarcities! (OM)
West Wittering: The three Spoonbills at Snowhill Marsh were still present today (per BFF) so we still have six present on the Peninsula.
Posted by Andrew House at 14:08