Saturday, 6th December: A cold, frosty and bright sunny day with a cool NW wind, making a welcome change from the grey dreariness of the last few weeks. Given that it is a weekend with fine weather, quite a few observers were obviously tempted out into the field, resulting in a nice range of species being logged...... reports include a male Hen Harrier, one or more Marsh Harriers, the Black Brant, 2 Ruddy Shelduck, 3 Spoonbills, 15 Slavonian Grebes, 2 Spotted Redshank, the regular Whimbrel and 2 Black Redstarts, of which fuller details appear in the reports below....

Chichester GP's - Drayton Pits: Anticipating the southern part of the Peninsula would be well covered today, I decided to stay north and visit the Pits. I hadn't been there too long and was listening to a calling Water Rail, when quite unexpectedly my personal highlight of the morning occurred involving a different type of rail ........ it was unmistakeable as I first heard then saw it ......yes, a steam locomotive! Battle of Britain class "Tangmere" came roaring through at main line speed, steam spewing out into the cold bright air and hauling a long rake of coaches; just magnificent and surely one of the finest mechanical sights there is. Oops, seems I've gone off on one, sorry to those less enthused and back to the birding....
I worked the pits for a couple of hours but there was nothing out of the ordinary. The wildfowl numbers were still low, the most obvious being c.50 Tufted Duck and 45 Gadwall, with just a dozen or so Pochard, 10 Shoveler and a handful of Wigeon and Teal. Nine Snipe were the only waders noted and 3 Water Rails were heard but not seen, whilst 40 Common Gulls and 1 Mediterranean Gull were also logged. 2 Chiffchaffs and a Cetti's Warbler were in the vegetation and back-up birds included 2 Jays, 2 Green Woodpeckers and a Sparrowhawk (OM).
Medmerry: Ham - a male Hen Harrier was observed from the viewpoint and a large flock of c.2000 Brent Geese was also present; the Black Brant and Pale-bellied Brent were amongst this flock, together with a grey goose sp.(IL) The latter has been somewhat elusive and previously reported as possibly a Greylag or a juv White-front... further update later. 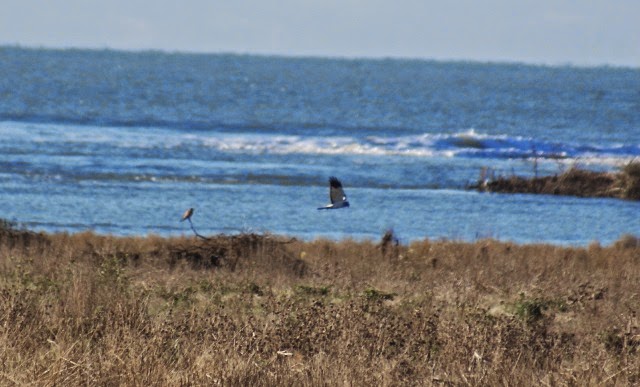 Male Hen Harrier from Ham viewpoint  and below, part of the Brent Goose flock (IL} 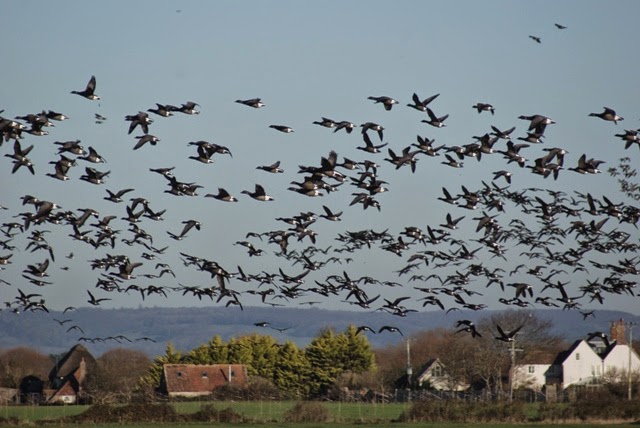 Independently BI and I went through the huge Brent Goose flock without finding a grey goose, though one flew over on its own - see the poor pic below - but I'm not much the wiser. (AH) 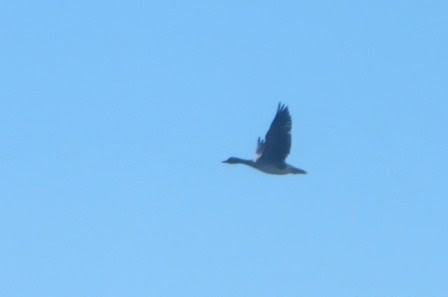 Mystery goose (above), Brent Geese & being disturbed by a Buzzard at Medmerry (AH) 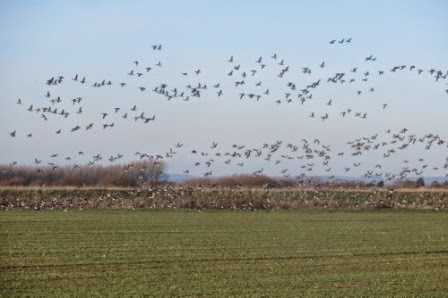 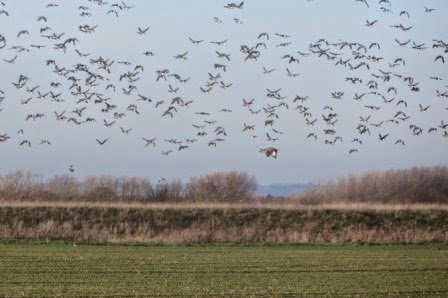 Not content with a mystery goose at Ham Farm, I found a rather mysterious duck on the pond between the farm and the bank this afternoon. I think, from what I can find in the books, that it is a female Southern Pochard, undoubtedly an escape, as it is an African species related to Red-crested Pochard, but I am quite prepared to be corrected! (AH) (note: this bird was first reported and identified on 3rd Dec by KF}. 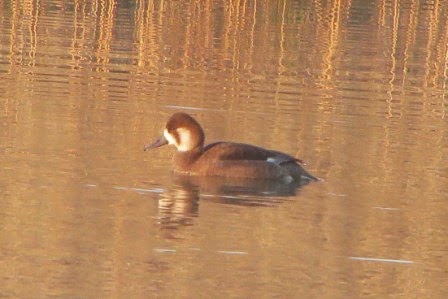 
Medmerry: West Sands to the breach - A female Marsh Harrier flew over high and purposefully heading west this morning, and there were 2 Black Redstarts about - one on the rubble piles and one by the last caravans. Also, there were c25 Common Scoter offshore, a pair of Stonechats and 20 odd Linnets and Meadow Pipits on the rough ground, and at least 50 Skylarks coming up off the fields at the back. Just a few waders - c100 Lapwing, c40 Dunlin and c10 Grey Plovers on the high tide, plus a few Wigeon and Teal. (AH) 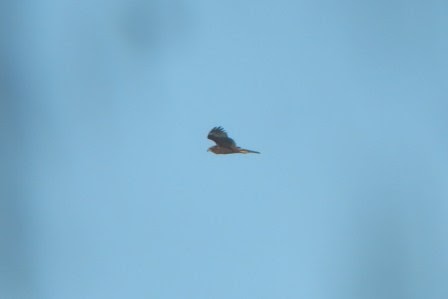 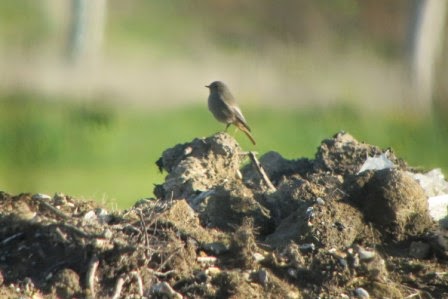 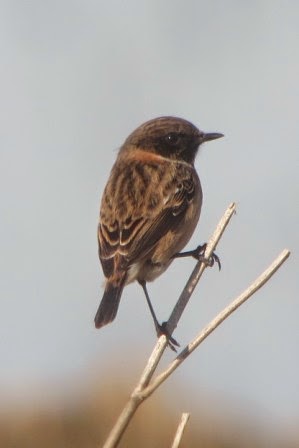 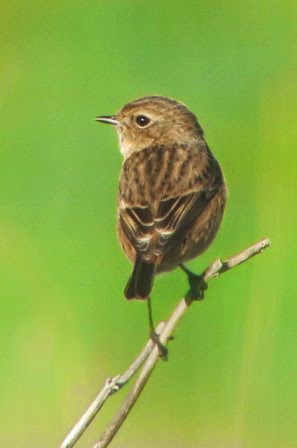 North Wall: The North Wall held good numbers of Black-tailed Godwits and 2 Spotted Redshanks with at least 20 Snipe around the Breach Pool. A pair of Stonechats was busy just behind the main pool, too, and another Cetti's Warbler was very vocal.
In the harbour the 2 Ruddy Shelducks were visible along Thrift Shelf with a large group of Shelduck. Around 20 Knot were seen with a good number of Golden Plover appearing as the tide rose to join the Grey Plover, Redshank and multitude of Dunlin already present. WIldfowl consisted of good numbers of Wigeon with fewer Pintail mixed in, and Brent Geese were only seen in small flocks flying over. A Rock Pipit was also present along the rocks (!) as we walked back.(AB/PB) 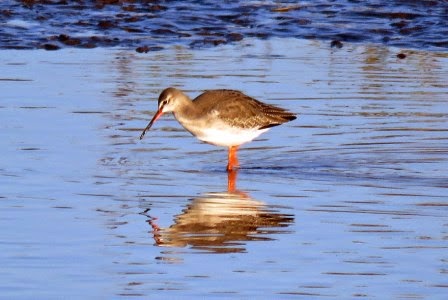 
Pagham Lagoon: There was a drake Goldeneye present this morning, along with at least 30 Little Grebes dotted about the place and one or two Water Rails calling from the edges. A Kingfisher zipped briefly up the lagoon from the walkway bridge where a Cetti's was calling. Also 2 Little Egrets present. (AB/PB) 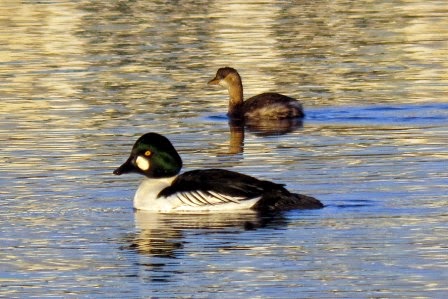 
Church Norton: There were as many as 15 Slavonian Grebes offshore this morning, along with 6 Great Crested Grebes, and in the harbour the 3 Spoonbills mostly snoozed the high tide away. The Whimbrel was also present, as were 3 Red-breasted Mergansers, and there were a couple of Chiffchaffs in the bushes. (AH/AB/PB) 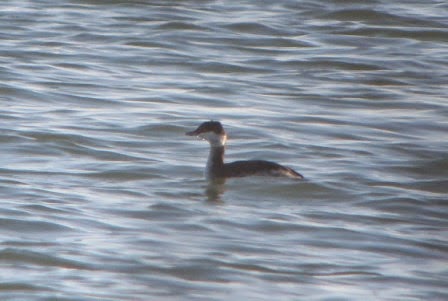 Whimbrel at Church Norton (below) (AB) 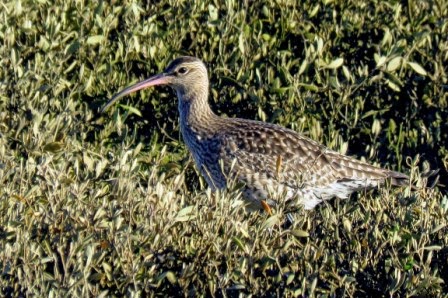 Friday, 5th December: An altogether better morning, with the sun even making an appearance, albeit brief....
Church Norton: As the doctor recommended that I should keep moving, I went for a therapeutic walk along the spit this morning, and was rewarded with an interesting selection of birds. Offshore there were 13 Slavonian Grebes, including a group of 9 together, along with 6 Great Crested Grebes, but absolutely nothing else on the sea.
A Short-eared Owl flew across from the east side of the harbour and settled on Tern Island, where the 3 Spoonbills were roosting, and along the spit there were a pair of Stonechats and up to 20 Skylarks. In the harbour the Greenshank and the Whimbrel were still present, along with plenty of roosting Knot, Grey Plover and Dunlin, and there were a dozen Pintail in with the Wigeon and Teal. (AH) 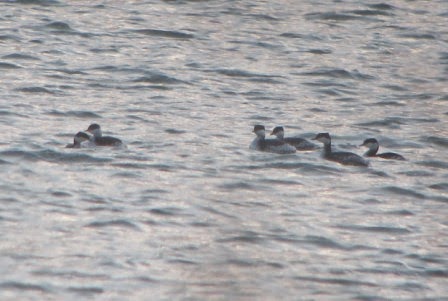 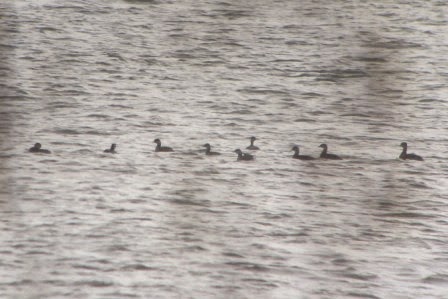 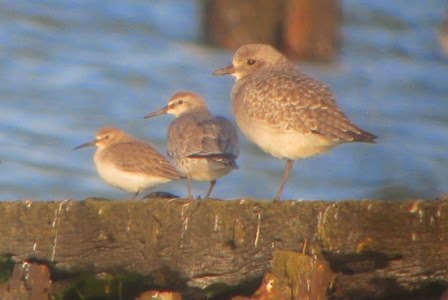 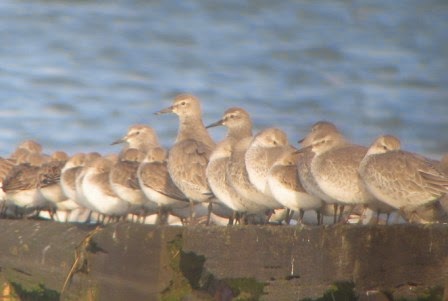 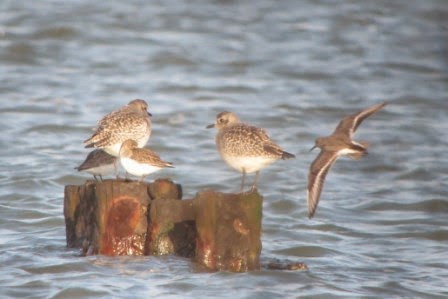 Medmerry: Easton Lane west to the beach - We recorded the following from the bank:
Brent Goose - 1000 on the wing
Sparrowhawk -  1
Buzzard - 1
Kestrel - 4
Green Sandpiper - 1
Skylark - 32
Stonechat - 10
Redwing - 3
Chiffchaff -   1
Reed Bunting - 22
Yellowhammer - 10
(C&ME)
Ham: Went to Ham today to see and photograph the Southern Pochard and the field behind Great Ham House was heaving with (c.2000) Brent including the Black Brant, one Pale-belly and one brown goose, probably an immature Greylag. I was there between 1130 and 1230 and the geese were spooked twice by a Peregrine then a Common Buzzard but resettled both times.(C. Holt}.
Thursday, 4th December: Another dreary morning, gloomy with heavy cloud and intermittent drizzle and a cold NE wind..... conditions gradually getting murkier and less pleasant as the day went on! It was the sort of day when finding birds was always going to be a bit of a struggle, but despite this there were a few bits of interest....... up to five Great Northern Divers, the three amigo Spoonbills, a Whimbrel, a Jack Snipe  and seven Goldeneye making the effort seem worthwhile.
Selsey Bill (0845-0915hrs}: Cold, damp, grey and murky, NE3. (Obs: OM/BFF) Nothing much moving and half an hour was enough for us!  Log below...
Great Northern Diver - 1W
Gannet - 1E
R/b Merganser - 1E
Common Scoter - 3W
Med Gull -  2os


Selsey (west): Drift Lane area - A Jack Snipe was in with 24 Common Snipe; also 11 Mallard, a Chiffchaff, a Grey Wagtail and 30 Curlew passing over, whilst Roe Deer numbers had increased to four (OM/BFF).
Coastguards: There were 3 Great Northern Divers offshore this morning, presumably seeking out the shelter of the west side in preference to the rougher waters of the Bill-tip; also 2 Common Scoter there (OM/BFF). 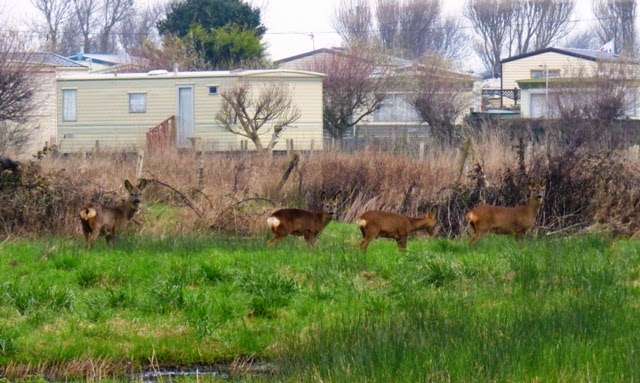 
Medmerry: West Sands to the breach - It seems like the semi-resident Great Northern Diver has finally headed out to sea as it was well offshore, preening itself and fairly distant. Also offshore were a Red-throated Diver, 3 Great Crested Grebes and c35 Common Scoter, whilst an Eider was just inside the breach mouth. Around the rocks, rough ground and rubble piles there was no sign of the Black Redstart but a Grey Wagtail flew over, whilst In the damp field behind the windmill 2 Stonechats were present (OM/BFF) 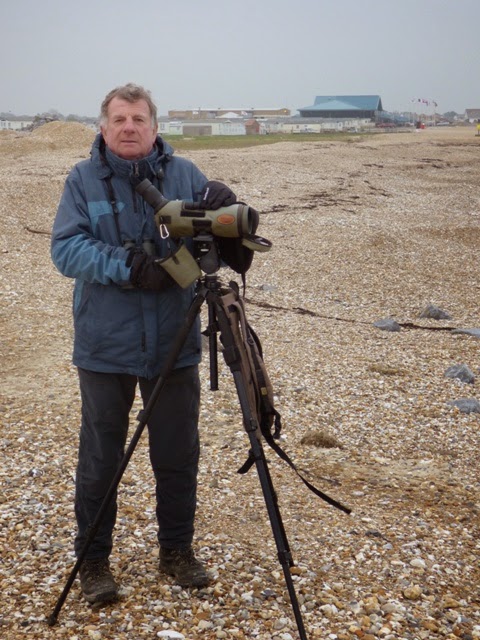 A cold and grumpy old man - alias BFF - on Medmerry beach scanning the sea for divers, and (below} Stonechat near Medmerry windmill (OM). 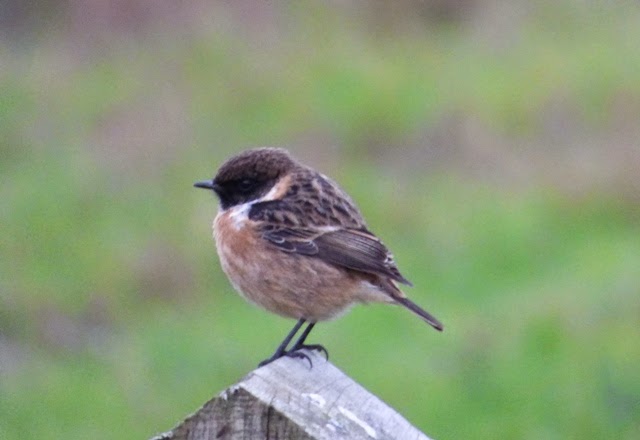 Church Norton: The three Spoonbills were still present early afternoon roosting on Tern island, but all sleeping and as inactive as ever. The Whimbrel was also seen (OM/BFF).

Fishbourne Creek: A short visit produced 15+ Yellowhammers around the horse paddock, a flock of 40 Skylarks in an adjacent field, and 7 Goldeneye in the channel. There were plenty of Dunlin and common waders on the falling tide, but by now the cold and damp had got to us so it was time to abandon and head home for a warming cup of tea (OM/BFF).

Sidlesham: Confined to quarters with acute sciatica, but out of the window there have been 40 Brent Geese and 2 Jays over, and a Great Spotted Woodpecker on the feeders! (AH) 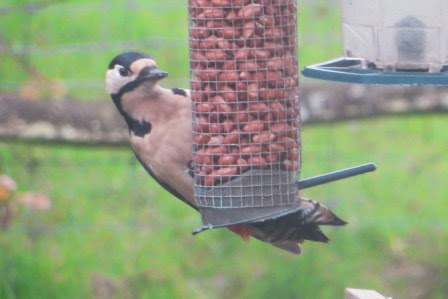 Great Spotted Woodpecker in a Sidlesham garden (AH)
Posted by Andrew House at 11:51