West Wittering / East Head: Three Spoonbills on Snowhill marsh, and a small flock of Yellowhammers and a Rock Pipit around the dunes, with numerous Stonechats. Plenty of the commoner waders and ducks, but very few Brent Geese about (BI).

Church Norton: The three Spoonbills were still here, as well, roosting the high tide away on Tern Island, so it looks like we have a completely unprecedented six Spoonbills over-wintering on the peninsula.
Not much else to report on a brief look, though there were four Red-breasted Mergansers in the harbour. (AH) 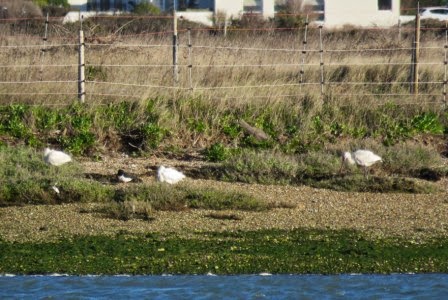 Spoonbills on Tern Island (AH)
Medmerry: Chainbridge to Ham Farm: I made it most of the way to Ham this morning, and there were a few bits along the way. The lonely juvenile White-fronted Goose was still in the brassica field along with a dozen Ringed Plovers, a Grey Wagtail moved along the rife, there were a pair of Stonechats by the gate, half a dozen Reed Buntings in the hedges and a few Meadow Pipits flitting about, then, just as I got back to the car a Short-eared Owl came briefly up off the bank, putting up several hundred Lapwings and 50+ Golden Plover from the tidal area. (AH) 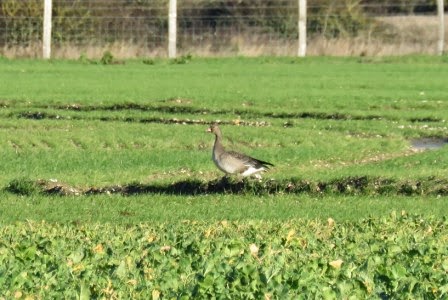 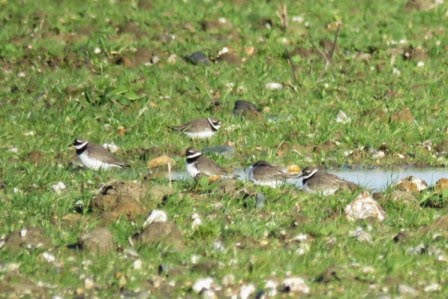 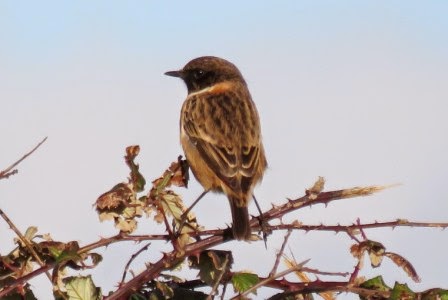 Ferry Pool: Less birds than yesterday, but there must be at least 1000 Lapwing on the field, with 50 or so Golden Plover amongst them. Otherwise there were c30 each of Shoveler, Teal and Shelduck, and plenty of Wigeon in the fields with 50 or so Canada Geese. (AH/BI) 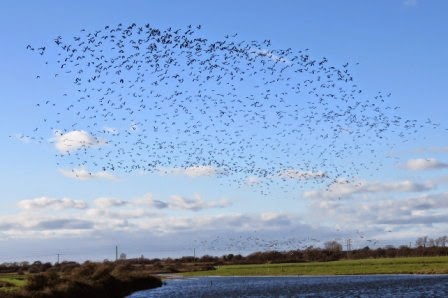 Who wants to count them? Lapwings over the Ferry (AH) 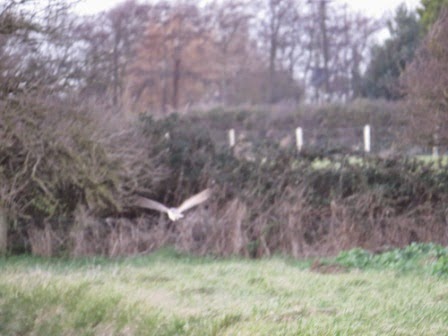 Barn Owl at dusk at Northcommon Farm (IP)
Tuesday, 23rd December: Not a bad morning - very mild, plenty of cloud, a bit of sunshine and a blustery breeze - but then some drizzle to spoil things by early afternoon. There being nothing new on the scene the birding had a general feel of 'same old thing' and perhaps this was true to some extent, but the day list produced amongst others a White-fronted Goose, 3 Spoonbills, a Whimbrel, a Woodcock, a Jack Snipe, a couple of Great Northern Divers, a Peregrine, a Merlin and even an escaped Southern Pochard... not a bad mix for an outing at this time of year given the uninspiring weather conditions (OM).

Church Norton: The three Spoonbills were back doing what they do best - snoozing on Tern Island - and there were also 12 Bar-tailed Godwits roosting nearby. Just one Slavonian Grebe and one Great Crested Grebe were offshore, whilst in the harbour there were four Red-breasted Mergansers, the Peregrine buzzed over and there were plenty of the commoner waders and wildfowl, including a decent flock of Knot and the wintering Whimbrel (AH/BFF/DM/OM). 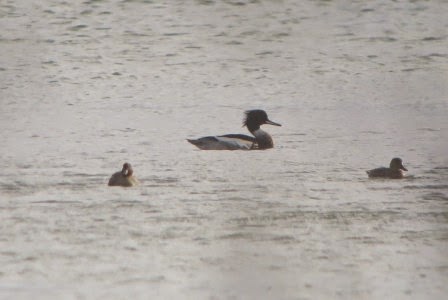 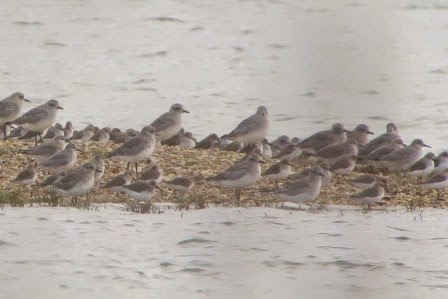 Ferry Pool: There was a huge amount of activity on/around the pool on the high tide. The two Ruddy Shelduck were present, along with 65 Shelduck, 44 Shoveler, 25 Teal, c200 Wigeon, 3 Gadwall and c50 Canada Geese. There were also c150 Golden Plover dropping in amongst c1000 Lapwing, and there were c50 Black-tailed Godwits and c30 Curlews in the back fields, and a couple of Buzzards and a Kestrel were also about. (AH) 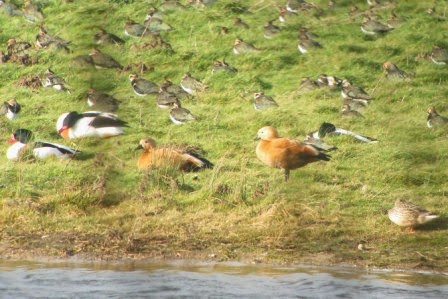 Ruddy Shelduck with Shelduck and Lapwing (above), Golden Plovers, Shoveler and Kestrel on the Ferry (AH) 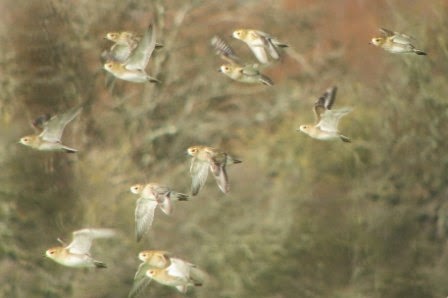 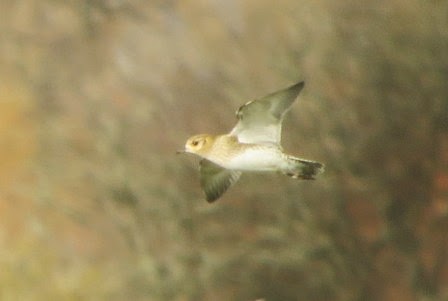 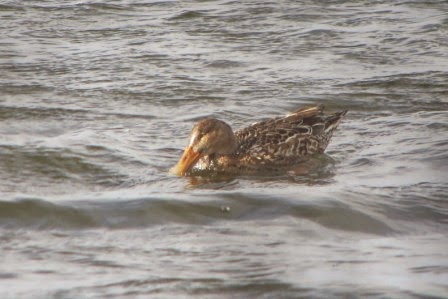 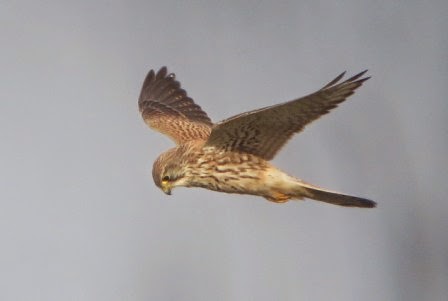 Medmerry: Breach and Viewpoint - waders were moving back and forth, though nothing unusual was on offer when we visited just after high tide. A flock of 42 Ringed Plovers was on the mud, whilst 60+ Grey Plovers and 50 Dunlin settled briefly before moving off and 30 Golden Plover flew over. A single Buzzard and a couple of Kestrels were about it (OM/BFF/DM).
Chainbridge to Ham viewpoint: We were probably a bit early for any owls, but there was certainly more activity here, a large flock of 500 Lapwings and 120 Golden Plover suddenly taking to the air although the cause of their panic was not established. A large flock of 120 Stock Doves was noteworthy, then the lone juv/1st w White-fronted Goose was noted, being Billy-no-mates and warily keeping its distance on the edge of a kale strip in a large grassy field. A large flock of 800+ Brent Geese was some distance away in fields near the Ham viewpoint, but nothing scarcer was found amongst them. Two Stonechats were along the fences and c.30 Skylarks in the adjacent field, the Southern Pochard was still on Ham ponds, whilst out on the marsh a handful of Pintail were amongst a small flock of Teal and Wigeon (OM/BFF/DM). 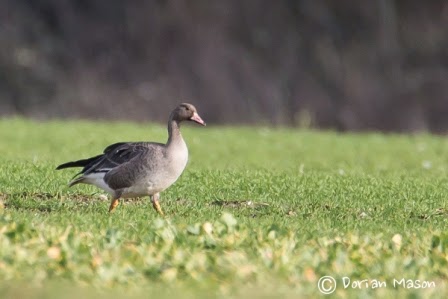 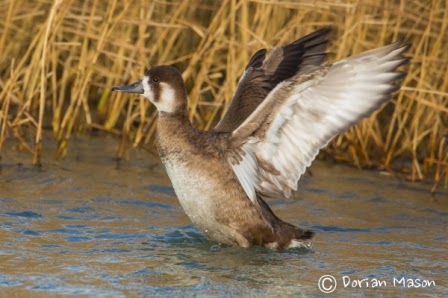 Monday, 22nd December: Another overcast, gloomy but rather mild day, with a fresh to strong WSW wind....
Church Norton: Not a lot to report this afternoon on a big tide and a blustery wind. The 3 Spoonbills were present on the island, but something spooked everything and they flew off and didn't return. The Whimbrel was seen briefly, there were 5 Bar-tailed Godwiits and 100+ Knot on the mud when the tide dropped, and there were a couple of Mediterranean Gulls and 30 Common Gulls amongst the Black-headed Gulls. Otherwise it was just plenty of the regular stuff. (AH) Later, a report of 2 Firecrests along the main path from the car park (per RBA). 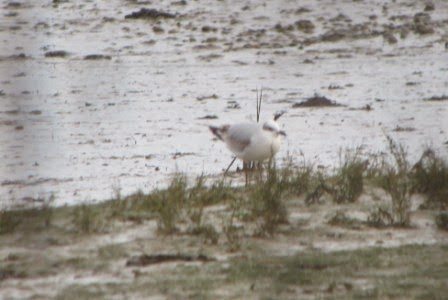 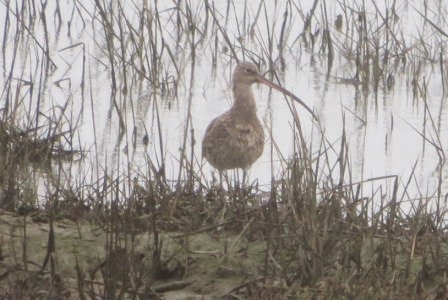 Medmerry: Over the middle of Medmerry today at 1230hrs, a flock (!) of ca.105 Snipe, high up and looking for somewhere to roost I presume. Southern Pochard still on Ham ponds, 2 Kestrels and 1 Stonechat at Ham viewpoint, and a flock of ca.45 Stock Doves on nearby stubble. Six Yellowhammers near Easton farm. Female Eider still in channel near breach (PH).
Posted by Birderowen at 09:45