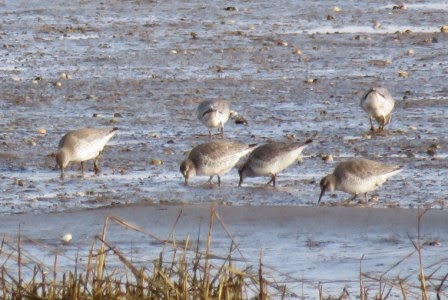 
North Wall: A cold, brisk NW wind along the Wall this morning White's Creek was almost deserted - just a few Wigeon, and one each of Little Egret and Spotted Redshank. The Breach Pool was similarly quiet with 70 Teal, 53 Black-tailed Godwits and a Spotted Redshank. Honer Field held 700 Brent Geese, 90 Curlew, 44 Black-tailed Godwits, 40 Lapwing, 260 Wigeon and 14 Moorhens. Elsewhere along the Wall was quiet. The large field immediately east of Marsh Farm held 200 Lapwing, 45 Curlew, 12 Black-tailed Godwits and 300 Wigeon. There were 800 (skittish) Wigeon in the field between The Wall and Halseys Farm. (JDW) 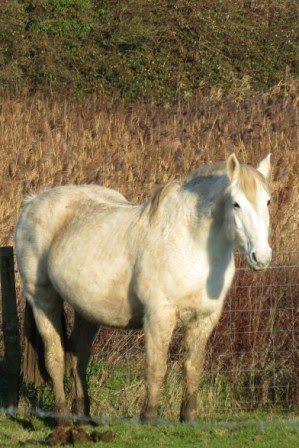 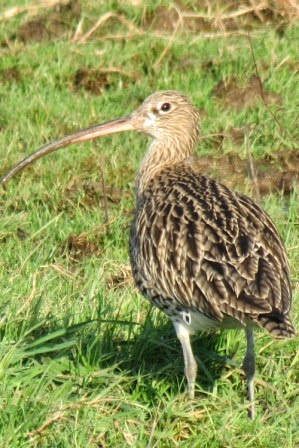 Pony & Curlew along the North Wall (JDW)
Medmerry: West Sands to the breach - Windy conditions made viewing difficult this morning, but a Peregrine flew through, a couple of Stonechats, c10 Meadow Pipits and c40 Goldfinches were along the banks, and on the pools there were a few Grey Plover, half a dozen Shelduck and 30 Teal. Also there were 45 Curlews on the small paddocks immediately before the caravan park check-point at Warner Lane. (AH) 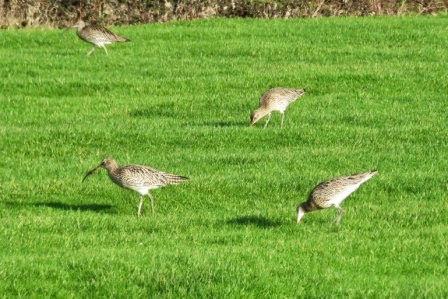 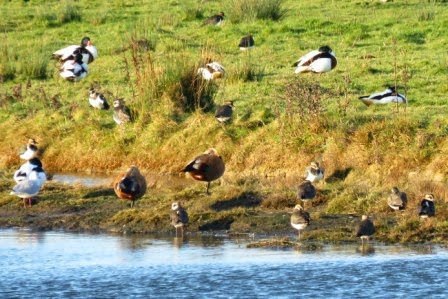 Ruddy Shelducks, Shelducks and Lapwing on the Ferry (AH)
Medmerry: Easton Lane westwards - Birds seen this afternoon included a Green Sandpiper, a Greenshank, a Kingfisher, 17 Fieldfare, 29 Gadwall, 2 Stonechat, 5 Yellowhammer & 2 Reed Bunting. (S&SaH/IP separately)
Ham Farm area - No sign of the White-fronted Goose in its favoured field, though there were about 800 Brent Geese! There were another 120 in the field by the farm, along with 200 Lapwing and 40 Golden Plover, and around the hedgerows/fences were single Corn Bunting and Yellowhammer, a pair of Stonechats and a few Meadow Pipits. Also seen were 4-5 Kestrels and Buzzards, but no other more 'interesting' raptors. (AH) 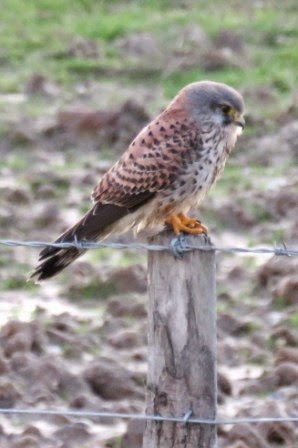 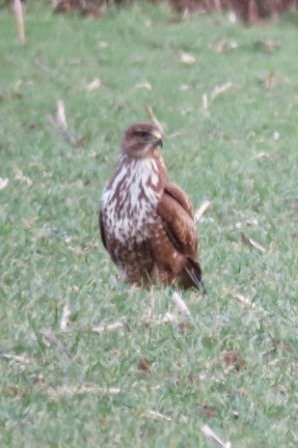 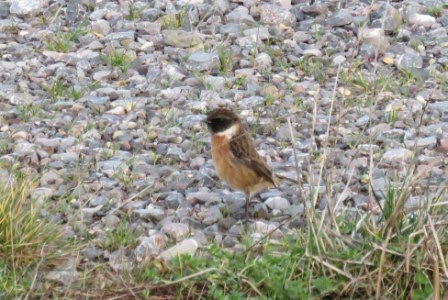 Ivy Lake: No sign of the female Red-Crested Pochard, though there were 10 Common Pochard, including 2 females, and the best sighting was 2 Kingfishers zipping across the smaller pools. (IP)

Fishbourne Creek: It was very full of water at high tide, but not brimming with birds; highlight being 3 Goldeneyes, 2 of which were drakes. (IP)

Boxing Day, Friday, 26th December: A cold start with heavy overnight frost, then cloudy with a light ENE wind, but with the prospect of rain by afternoon. At the Bill a few wildfowl and bits and pieces moving about, and an increase of Great Northern Divers offshore to nine.......... 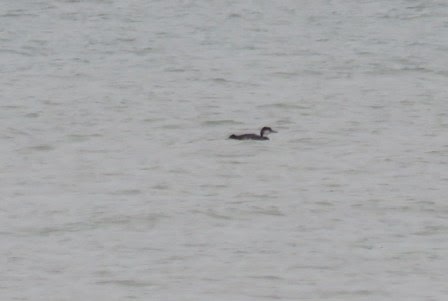 Great Northern Diver off the Bill (AH)
Church Norton: I cycled along to Church Norton this afternoon, getting rather wet in the process. The tide was rapidly rising and there were plenty of our usual waders and waterfowl to please the visitors, but nothing out of the ordinary apart from the drumming Woodpecker in the Priory grounds. The 3 Spoonbills were roosting on Tern Island alongside a couple of Grey Herons and a handful of Little Egrets. A dozen close-in Pintails were looking rather splendid, 4 Mergansers were diving for their lunch, and Grey Plover, Knot, Dunlin and Redshank jostled for position on the remaining little islands and promontories. (SR)
It was pretty quiet ealier on - one of the Spoonbills out on the mud was the highlight, and a solitary juvenile Brent Goose was the only bird on a perfectly calm sea! (AH) 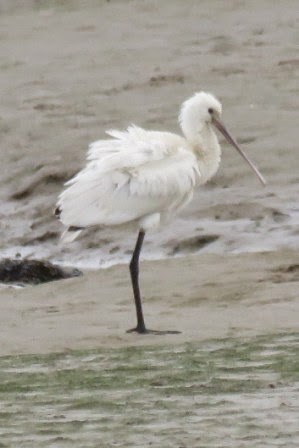 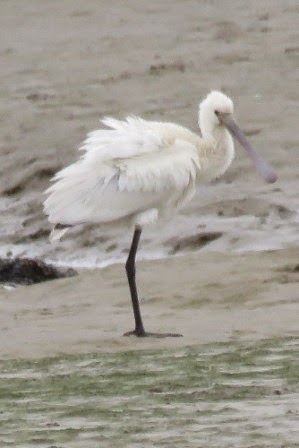 Our regular walk to Norton early this afternoon produced the Green Sandpiper and Grey Wagtail at Park Farm, the 3 Spoonbills roosting on Tern Island, 8 Red-breasted Mergansers
in the harbour and a Stonechat on the spit, along with a Red-throated Diver and 2 Gannets offshore. (S&SaH)
Ferry Pool: Still up to 1000 Lapwing on the field, along with 80 Brent Geese, 50 Canada Geese and 200 Wigeon. Along the edge of the pool were 40 Shelduck and 25 Shoveler. (AH)

Christmas Day, Thursday, 25th December: A fine, cold and crisp day with a cool W/NW wind. The editors would like to wish all contributors, regulars and casual visitors to this blog site the compliments of the season and hope you have a peaceful and enjoyable Christmas (AH/OM). Wasn't too sure there would be any birding news today, but as ever several of the locals managed to make it out in the field for a short while.......
Church Norton: This morning there was a single Spoonbill that flew into Tern Island, a Greenshank on the island, a Raven over, 2 Red-breasted Mergansers in the harbour, a Stonechat on the horse's field, and the Grey Wagtail and Green Sandpiper around Park Farm Reservoir. (S&SaH/IP/AH) 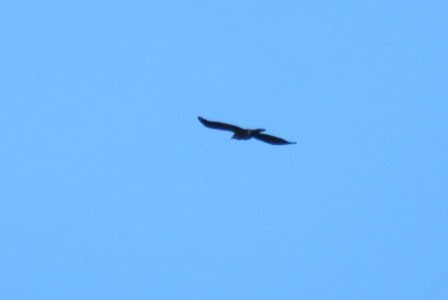 Raven (above), Spoonbill & the resident Redshank by the bench at Church Norton (AH) 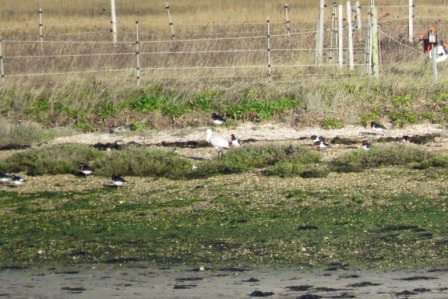 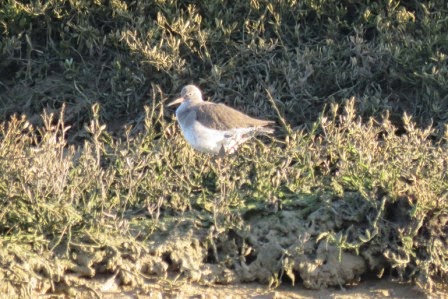 Chichester GP's - Ivy Lake: Generally quiet apart from a few Cormorants in the roost and a scattering of Great Crested Grebes and Tufted Ducks. On Copse lake the female Red-crested Pochard was showing well along with a Kingfisher and there were eight Little Egrets in their roost (BI} 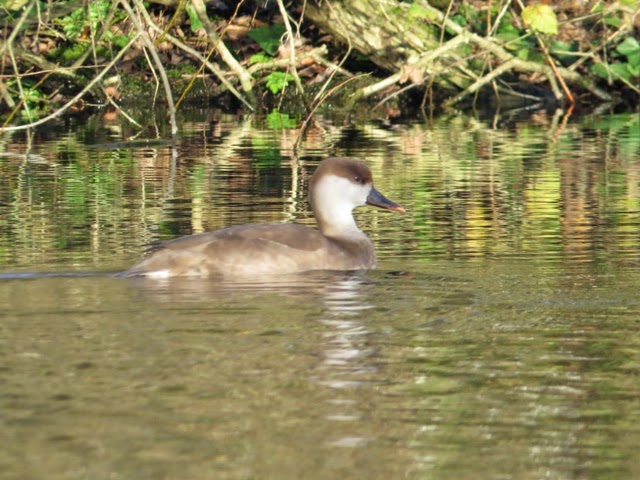 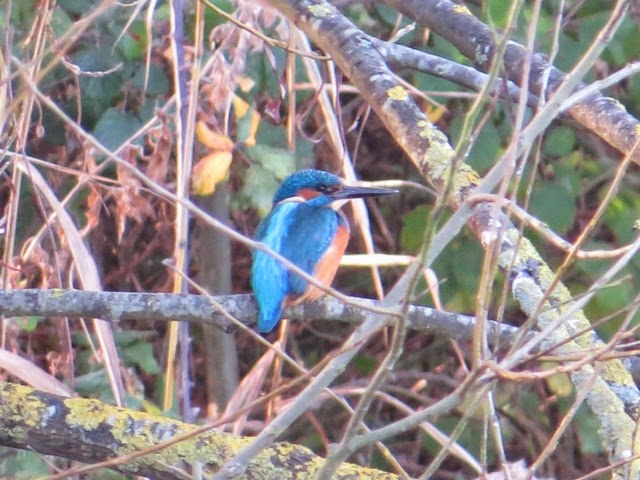 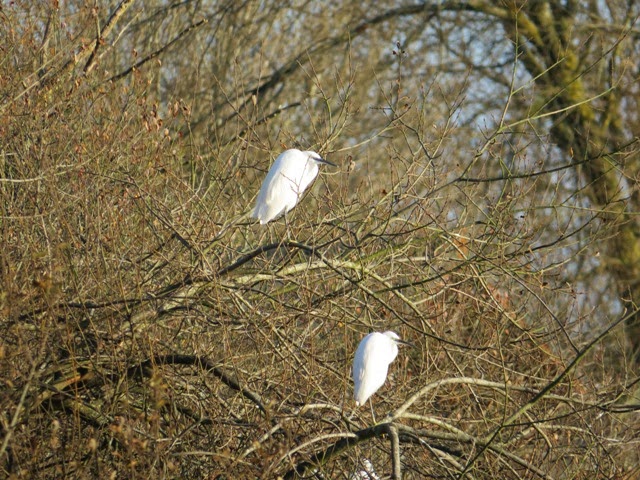 Medmerry: A nice day for a bike ride but the birds seemed to be keeping tucked away out of the wind..... Chainbridge Field to Ham:  No owls despite a good search, 4 Stonechats close to the bridge, and a Kingfisher flew across heading toward the pools.  Further along toward Ham the lonely White-fronted Goose was in its usual place, happily munching away, whilst on the Ham long pool the Southern Pochard kept company with a few Tufted Ducks.


West Sands - Breach Viewpoint: It was high tide when I reached the viewpoint; 2 more Stonechats were in the field opposite, a Buzzard, a chattering flock of Goldfinches, c30 Grey Plover, and assorted Teal and Wigeon, Stock Doves and Lapwings in the fields and distantly a large flock of Brent (SR}.
Posted by Birderowen at 08:40