Monday, 29th December: A very cold and frosty morning, fine and sunny again with a fresh NW wind, although the temperature today may only just about get above freezing. One item of early news concerning found property..... I got a call from Paul Bowley who had found some spectacles/shades in an expensive looking black case at the Bill. If they are yours and you can identify them, please contact me or Paul to arrange their return (OM).
Selsey Bill: (0800 - 0930hrs) (Obs: AGB/PB)
Great Northern Diver - 1os
Red-throated Diver - 2W, 2E
Gannet - 7E
Shelduck  4W
Common Scoter - 5W
Red-breasted Merganser - 2W, 2os


Ferry Pool: A Tundra Bean Goose was at the back of the pool this morning with the Canada Geese, and there were also 2 Greylag Geese and several hundred Brent Geese and Wigeon on the grass. There were at least 120 Black-tailed Godwits, 30 Curlews, 50 Golden Plover and 500+ Lapwing on the fields, a Water Rail and six Snipe  on, and a Kingfisher over the pool, and there were still three Gadwall, c50 Shovelers and c40 Shelduck present, too. (IL/AH/AGB/PB/SR)
The Tundra Bean Goose was still present late afternoon. (S&SaH) 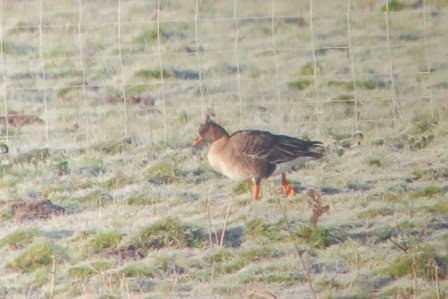 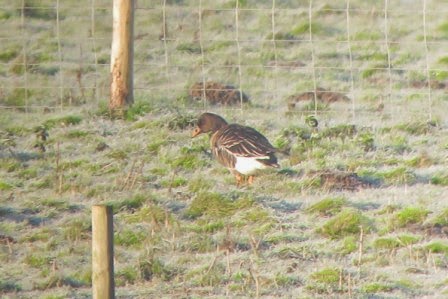 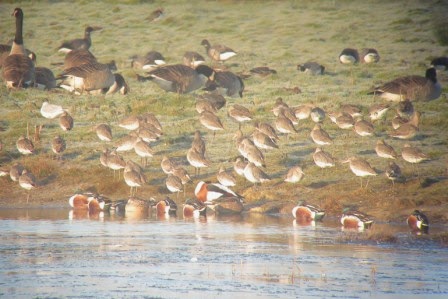 Church Norton: The Whimbrel, the leucistic Curlew and the two Ruddy Shelducks were in the harbour, and the three Spoonbills and an Avocet were in the channel at the end of the Long Pool. (AGB/PB)
North Wall: A Spotted Redshank was in White's Creek, feeding south of the sluices (S. Thomas)
Medmerry: West Sands to the breach - There was a Rock Pipit briefly on the rocks this morning and there were five Sanderlings and a Dunlin on the now quite large area of sand around the breach. Not much in the pools, about 20 Grey Plover, 20 Dunlin and a couple of Curlew was about it, and there was just a flock of 30 or so Goldfinches and a few Meadow Pipits along the fences. (AH) 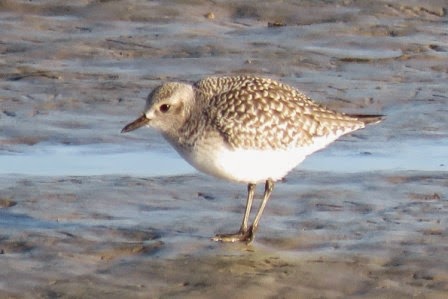 Medmerry: Easton Lane area - Not a lot in a fairly quick look, though a dozen or so Fieldfares were on the uncropped field just past the first pool, at least 100 Teal were on the tidal area and a Snipe came out of one of the ditches. (AH)
Medmerry: Chainbridge Field to Ham Farm - One Short-eared Owl was present along the hedgerow of Chainbridge Field, but didn't seem very keen to hunt, a Green Sandpiper came out of one of the ditches and there were a couple of Buzzards about, too. (S&SaH/AH) 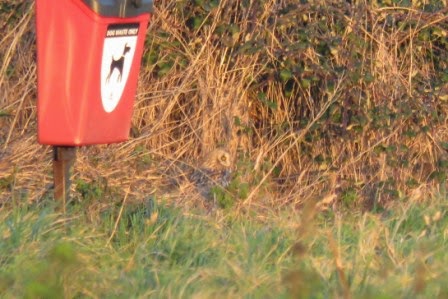 Spot the Short-eared Owl! Chainbridge Field (AH)
There was a huge flock of Brent Geese - at least 1500 - at Ham Farm, and there were 100+ Golden Plover and 200+ Lapwing in the same field.
A Stonechat, a Skylark and 10+ Meadow Pipits were along the bank, the Southern Pochard was still present and a Water Rail was in another of the ponds. There were also 20+ Dunlin and 10+ Ringed Plover on the tidal area nearby. (AH) 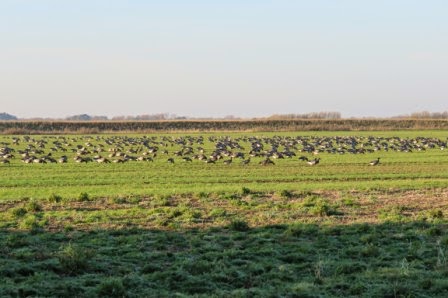 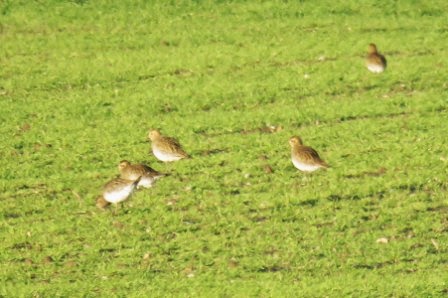 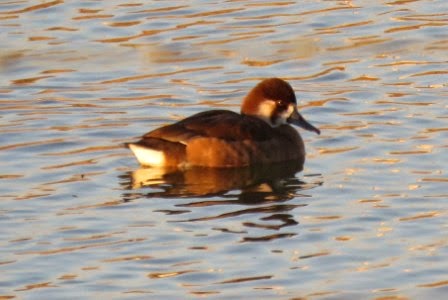 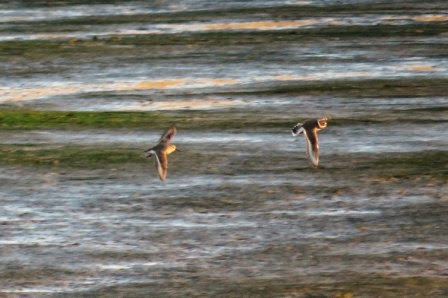 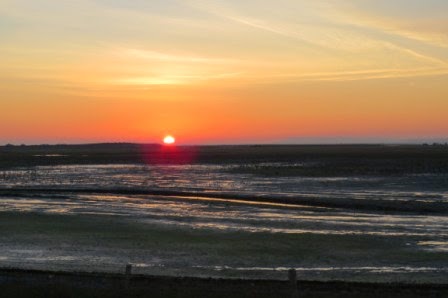 
Church Norton: The rarest bird of the morning for me - which will hardly set the pulses racing, but in 5 years this is only my third sighting - was a pair of Gadwall on the 2nd Several. Otherwise there was no sign of any Spoonbills this morning in the harbour on the low tide, but both the Grey Wagtail and Green Sandpiper were just beyond Park Farm, a male Stonechat was along the fence line at the start of the Spit, whilst offshore there was just one Great Crested Grebe, and two Red-breasted Mergansers, which flew along the shoreline. (IP)
To add to the above list,there were 5 Avocets and a Yellow-legged Gull in the harbour, and a Red-throated Diver and 11 Pintail offshore. (S&SaH)


North Wall: About five Snipe along the Breach Pool, plus 40 Teal and a handful of Reed Buntings, but not much else. There was a big flock of Brent Geese (800?) in the field with the footpath through it, and there were plenty of Curlews and Black-tailed Godwits at the far end, too distant to count. (AH) 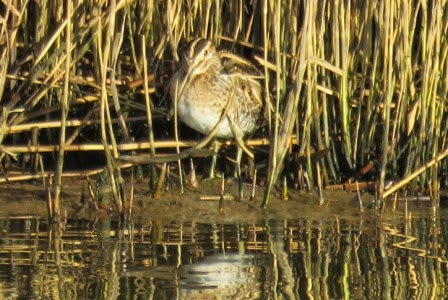 Snipe on the Breach Pool (AH)

Pagham Lagoon: A very smart drake Goldeneye was the highlight, and there were also 6 Pochard, 30 Tufted Duck, 40 Little Grebes and a few Common Gulls present. (AH) 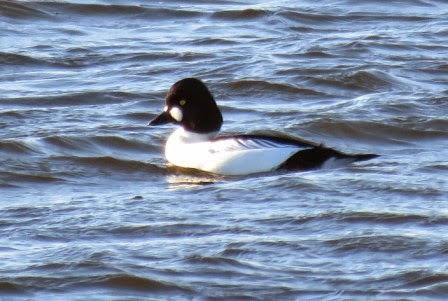 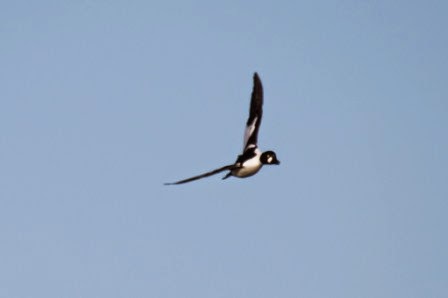 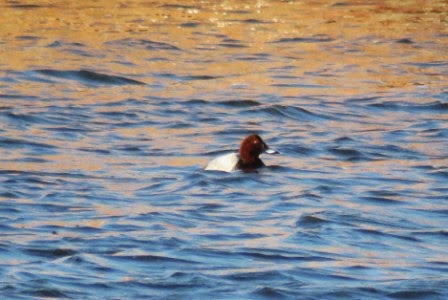 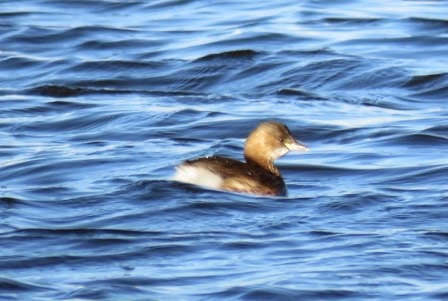 Ferry Pool: Still large numbers of birds on the fields, including 80+ Black-tailed Godwits, 40+ Curlew, 400 Brent Geese, 200 Wigeon and at least 1000 Lapwing. On the pool itself there were 3 Gadwall, 30 Shoveler and similar of Shelduck and Teal. (AH) 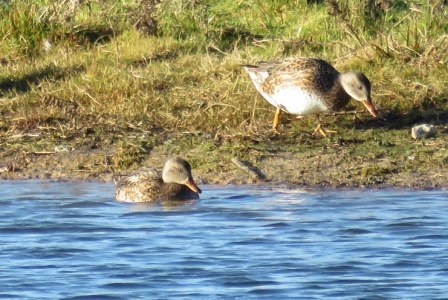 Gadwall on the Ferry (AH)
Posted by Birderowen at 09:22