Saturday, 12th April: With the wind still light and westerly the Bill remains closed to most easterly seabird passage, but as ever there were a few things of interest.....and with a fair number of observers on the peninsula there were also a variety of reports. 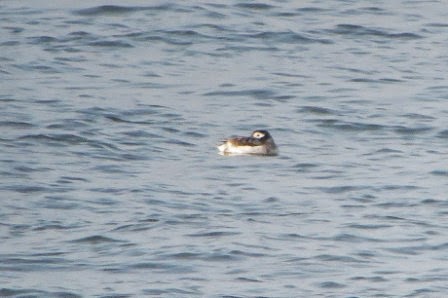 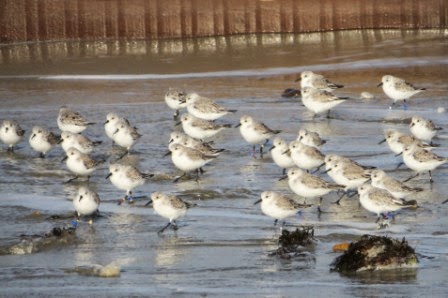 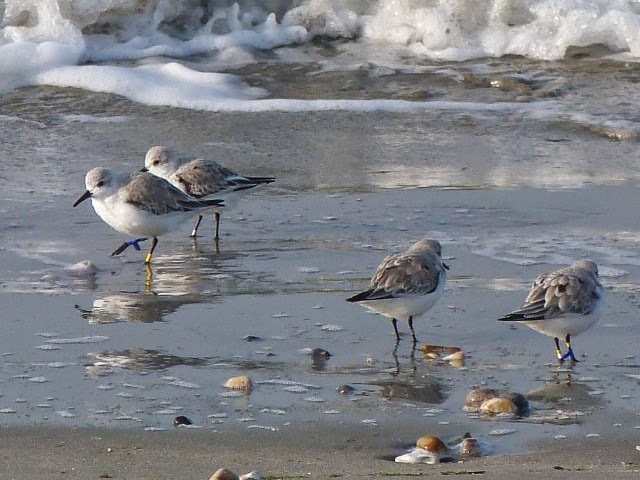 Selsey Northcommon Farm: A male Redstart being harassed by a resident Robin, 2-3 Willow Warblers, a pair of Stock Doves and 2 Green Woodpeckers (OM)
Ferry Pool/Visitor Centre: Two Cuckoos flew over the centre early this morning. Also in the vicinity were a Common Whitethroat and a Lesser Whitethroat. On the Ferry still 6 Avocets, plus 2 Wigeon, 4 Gadwall and 20+ Shoveler. (C&ME/C&JM/AH)


North Wall/area:  231 Black-tailed Godwits and 1 Spotted Redshank on a very muddy Breech Pool. A Wheatear in the field behind and a Cetti's Warbler seen carrying nesting material just west of the Pool. A Sand Martin and Swallow around the Pool and several Chiffchaffs singing in Owl Copse. (JW). Two Spoonbill reported from the North Wall area, 1 imm Spoonbill flying southwards along Church Norton Spit towards the Bill (& later reported over Medmerry), 2 Wheatears on the spit, 1 Common Redstart at Glebe Meadow and 1 Gannet on the sea (IL)


Church Norton: Another Cuckoo seen & heard here, plus one at Park Farm Selsey, the regular Nuthatch in the churchyard, though fewer migrants were seen today. There were single Whitethroat and Lesser Whitethroat seen, and plenty of Blackcaps, Chiffchaffs and a few Willow Warblers about, plus a steady trickle of Swallows and Sand Martins over, whilst in the harbour 6 Sandwich Terns were indulging in a bit of displaying, and on the sea there was a female Eider and a female Red-breasted Merganser. (C&ME/C&JM/SdeH/S&SaH/AH) 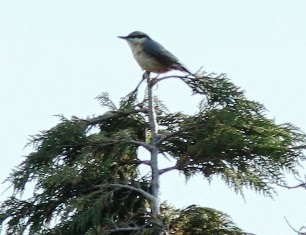 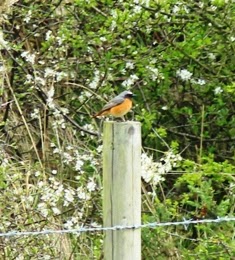 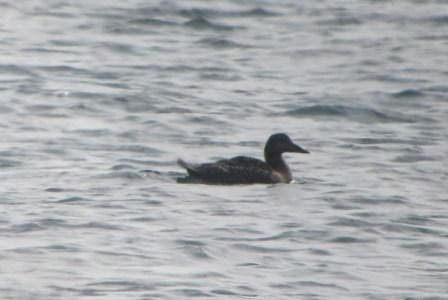 Horse Paddock off Warner Lane: 2 pairs of Blackcaps, 1 pair of Linnets, 1 pair of Red-legged Partridges, and a Grey Heron looking rather out of place. (SR)


Church Norton: An interesting morning, though predictably the most interesting birds made life difficult. The male Redstart was still skulking in the churchyard keeping away from the local Robins, and two more were seen along the path through Greenlease Farm. Also there, heard but not seen, was a Nightingale in the hedges just east of the farm. There were up to five Wheatears along the beach, a Common Whitethroat briefly in the car-park, a Sedge Warbler in the first Several, plenty of Chiffchaffs and Willow Warblers about, and there were at least 40 Blackcaps, seemingly in every bit of blackthorn blossom right around the circuit.
The Nuthatch was heard initially between the Severals and again from Rectory Lane, a Sand Martin and half a dozen Swallows flew over, a female Eider was offshore, and finally a single Brent Goose and a single Sandwich Tern were in the harbour. (AH) 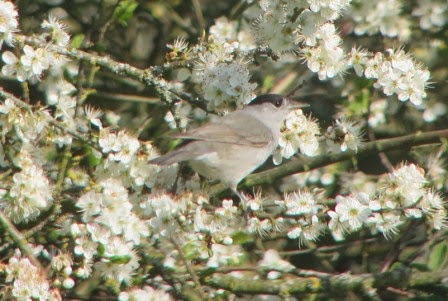 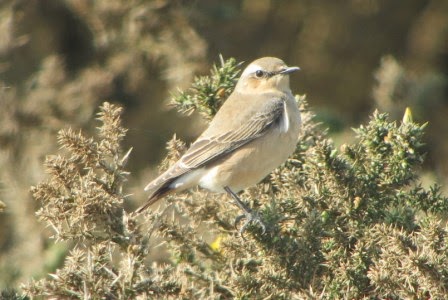 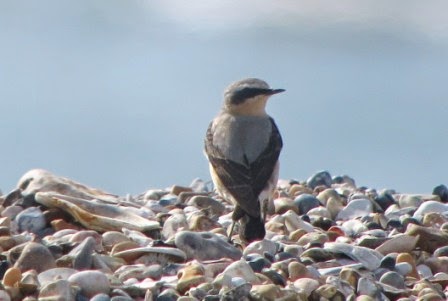 Further visits to Church Norton from S&SaH, AH & CRJ late this afternoon found a Long-tailed Duck on the sea, the Nightingale singing occasionally on Greenlease Farm, a couple of Swallows, a Mistle Thrush and numerous Blackcaps, Chiffchaffs and Willow Warblers. (AH) 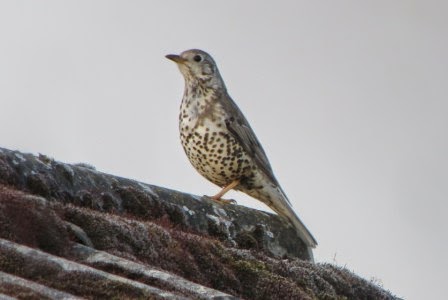 Mistle Thrush at Church Norton (AH)
Medmerry: Through the caravan park today around the rubble and tyres: four Wheatears, a male Common Redstart, a pair of Stonechats, lots of Linnets, a Willow Warbler and a few Pied Wagtails (BI)
A late afternoon look round the same area found a Little Ringed Plover, a pair of Ringed Plover, the four Wheatear, and a Tree Pipit along with 3 or 4 Meadow Pipits. (AH) 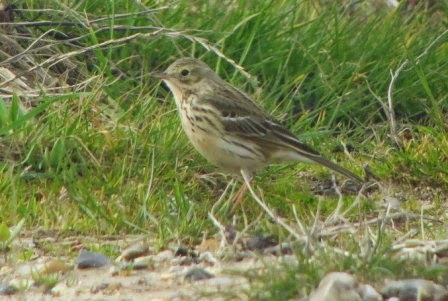 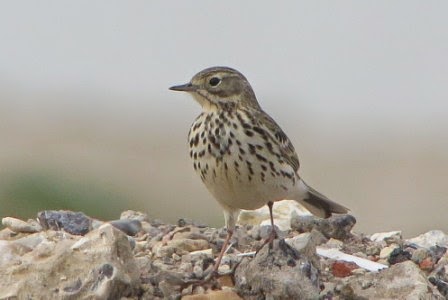 Thursday, 10th April: A bright, sunny morning with no sea passage to report, but something of a fall of passerines....

An additional hour (12-1300hrs) produced just  Red-throated Diver - 3E, Oystercatcher - 2E. Sandwich Tern - 2E, 1W and Swallow - 1N. So there I was, quietly taking lunch and birding, when this alien thing appeared almost overhead, buzzing its way slowly along the beach...... spacecraft? No, it was a drone... and its cheeky owner was wisely a good distance away from me. Still, it may have uses in the future as an early warning pom-detector! (OM). 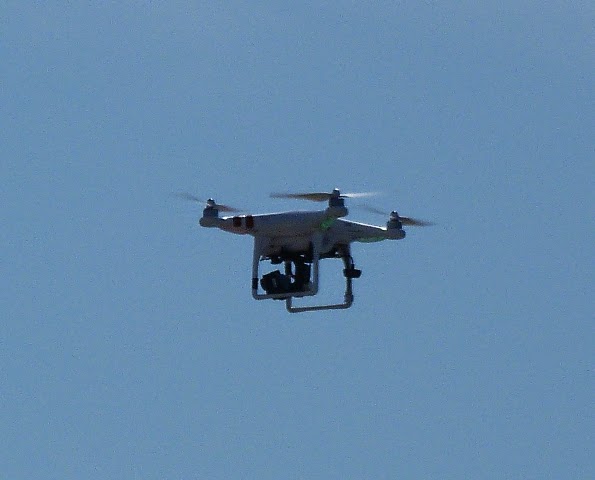 Is it a bird? Is it a plane? No it's an irritating remote-controlled drone aerial camera at the Bill! (OM)


Church Norton: A frustrating morning! A&YF reported briefly seeing a Pied Flycatcher in the churchyard, and shortly afterwards a Hoopoe by the concrete wall, which flew off into the (private) Priory area, but despite much searching neither could be refound! A male Redstart around the churchyard wasn't much more obliging, but did briefly give itself up on a couple of occasions. Otherwise there were up to ten Blackcaps about, and up to twenty Chiffchaffs and/or Willow Warblers around that area and similar along the west side. There were also half a dozen Sandwich Terns in the harbour, plus 2 Bar-tailed Godwits and 2 Buzzards (AH/OM) 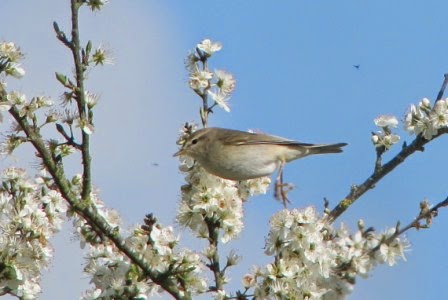 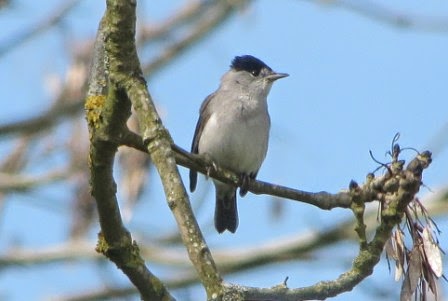 North Wall/Fields: Not much to report on my bike ride around the area today, except an obvious fall of Willow Warblers, they seemed to be singing everywhere, minimum 20. On the way to Honer Reservoir 4 Yellowhammers and 4 Chiffchaffs singing, 45 Mute Swan in the field to north; on the Breech Pool c100 Black-tailed Godwits, more Blackcaps about today also. On the return ride 4 Swallows steaming north over Marsh Farm (CRJ).
Medmerry: A Whimbrel over, calling, this morning, and a fall of Willow Warblers on the dead hedges in the new intertidal area.(PH) Cuckoo seen and heard close to the Easton Road Car Park plus noticeable increase in Blackcaps, Willow Warblers and Chiffchaffs. Earnley Flood Pools: 4 Avocets and 3 "White" Wagtails.(P. Stent & G. Tamlyn)
Posted by Andrew House at 12:36