Wednesday, 23nd April: At last a south-easterly at the Bill, but nobody told the birds..... although Poms are beginning to appear along the coast in East Sussex and beyond, so it must surely just be a matter of time (although I'd be grateful if they could hang on just a day or so until my commitments are clear!) Meanwhile, today I received some welcome feedback on the blog, as it seems information we provided on 12th April was picked up and has led to the provision of data for the Sanderling ringing scheme.... with a number of colour-ringed birds seen at the Bill on 12th April being identified, most having been originally ringed at Hayling Is, Hants and wintering in the general area. However, three of these birds had also been tracked further afield.... one being sighted on several occasions in France, whilst two others were located in Iceland in June. News on further Bill sightings on 15th April is awaited. Thanks to Anne de Poitier, Pete Potts and J.W.H.(Jeroen) Reneerkens. (OM).
More info, and some background information about the Sanderling project can be read here: http://www.waderstudygroup.org/res/project/sanderling.php
Selsey Bill 0548-1700hrs: Cloud, showers/light rain, wind SE 3-4. (Obs: CRJ/AH et al)
Very similar to yesterday - a few Bonxies and an Arctic Skua and a slow trickle of terns and Common Scoters was about the size of it. Full log below......
Great Northern Diver - 5 os
Black-throated Diver - 2E
Red-throated Diver - 1E
Diver sp - 3E
Gannet - 37E, 7W
Fulmar - 2E, 5W
Grey Heron - 1 p (early)
Shag - 1 os (s/plum)
Brent Goose - 29E
Common Scoter - 161E
Oystercatcher - 7E,1W
Curlew - 5E
Whimbrel - 9E
Turnstone - 2 ob
Great Skua - 11E
Arctic Skua - 5E
Sandwich Tern - 98E
Comic Tern - 265E (probably all Commons but some distant)
Little Tern - 10E, 4 os,
Kittiwake - 7E, 3W
Common Gull - 29E
Razorbill - 1 os
Auk sp - 3W
Swallow - 5N
Additional watch 1700 to 1920hrs (Obs: SH)
Gannet - 8E, 2W
Little Tern - 4 os
Common Tern - 92E
Sandwich Tern - 16E
Kittiwake - 7W 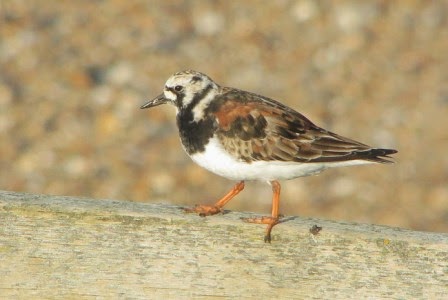 Turnstone (above) & Sandwich Tern at the Bill (AH) 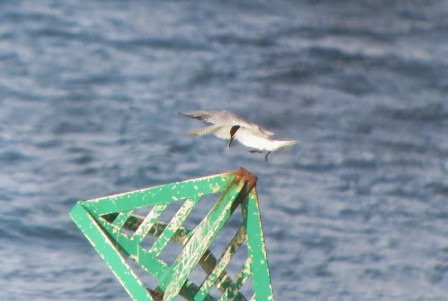 Ferry Pool: 2 Little Gulls briefly dip-feeding this morning. Also a Cuckoo at the back and 23 Black-tailed Godwits. (G&RH) The summer-plumaged Spotted Redshank was in Ferry Channel this morning (G&RH) and a Kingfisher was there this evening. (AH) 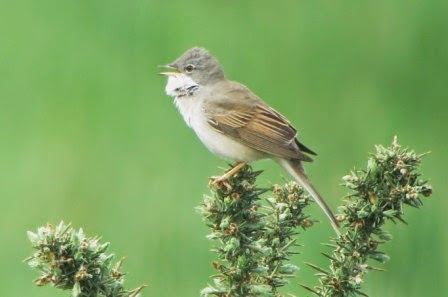 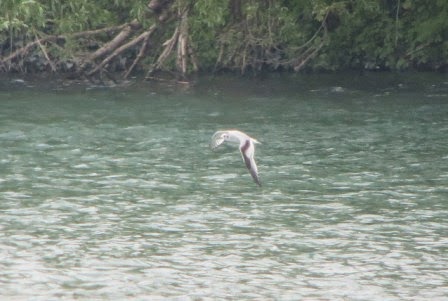 Medmerry: A female Eider inside the Breach Channel today and a Yellow Wagtail at Earnley yesterday. (PH)

Tuesday, 22nd April: Rain overnight and into the morning, with a change of wind direction to SW. The damp (and early) start found me, one other brave soul and a certain Mr Janman wandering around the area of the Tramway hoping to locate yesterday's Subalpine Warbler - to no avail and all very disappointing - whilst everyone else was presumably and perhaps sensibly waiting on news (still no sign by early afternoon). Meanwhile a quandary arose when a message from Matt at Seaford informed me of Poms passing that location; in the end CRJ stayed put looking for the warbler whilst I headed to the Bill, where there was already a small gathering of regulars. No Poms for us I'm afraid, but once again an early flurry of passage gave false hope before things quietened down considerably, although there was a notable influx of Wheatears at various sites (OM). 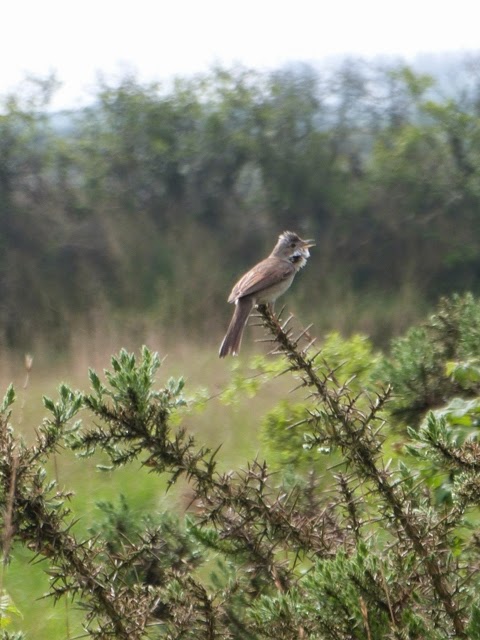 North Wall: A really splendid male Whinchat in the stables field. Reed and Sedge Warblers could be seen/heard all along the Wall. Linnets nest building. Just a pair of Tufted Ducks and Teal on the Pool. The Little Grebes at Owl Point have a single chick, well disguised on parents back (JW). Also a report of 2 possible Common Cranes drifting NW over the Visitor Centre around 13.00 (IL)

Church Norton: A Redstart in the churchyard (IL). At Church Norton we sat on the bench on the Inner Beach and counted at least 25 Wheatears nearby, with another birder having 25 on the beach by the Severals and 8 more counted in the fields along Norton Lane; we therefore estimated 58 just around Church Norton! From the Inner beach we found a large flock  of 420 Dunlin feeding on the mudflats. In with this flock we had a winter plumage Curlew Sandpiper, 3 Sanderling and 6 Knot, with at least 30 Bar-tailed Godwits  and 12 Whimbrel feeding in the harbour. Hearing of a Ring Ouzel along the west side of the harbour we walked up and found 2 Ring Ouzel around the bushes north of the dry reed bed; also 3 Common Redstarts, a calling Cuckoo, a Lesser and 3 Common Whitethroats and a Sedge Warbler. Scoping the feeding Dunlin flock from the gorse bushes we had a much closer view of the feeding Curlew Sandpiper, but at around 1300 hrs they all took off flying out of the harbour (BFF/DIS/DM). 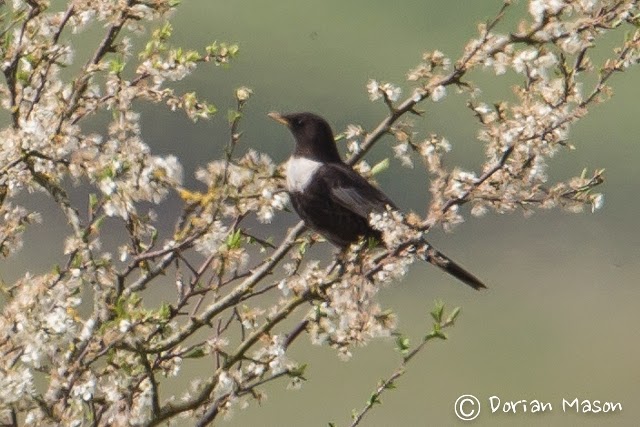 Ring Ouzel on West side of Pagham Hbr, and Wheatear at Church Norton (D. Mason) 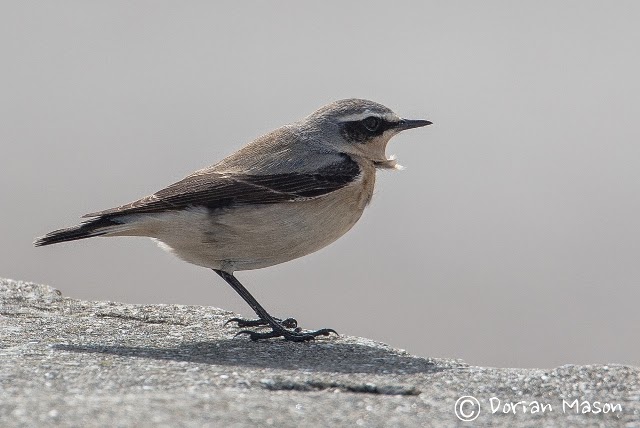 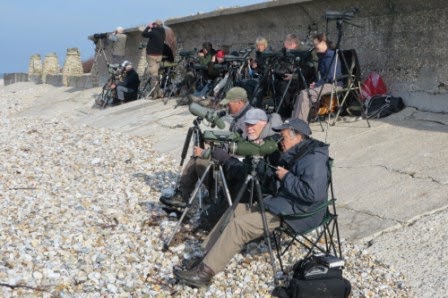 The gathered crowd at the Bill, full of anticipation.....(AH) 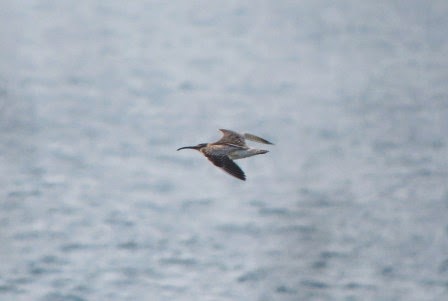 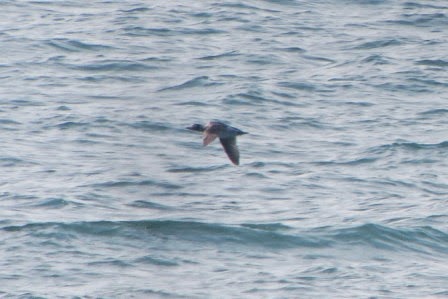 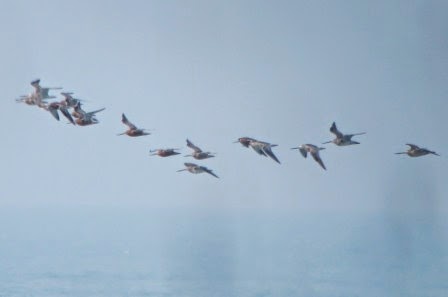 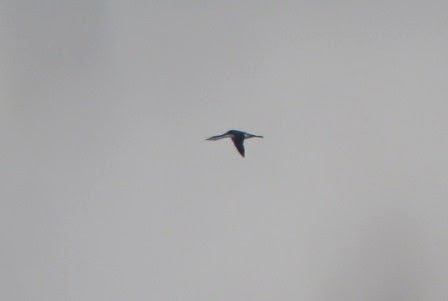 Ferry Pool: Still 3 Avocets, 5 Gadwall, 2 Wigeon and a single Wheatear at the back this morning. (AH)

Church Norton to Long Pool: Very quiet around the churchyard/hide area - a single Willow Warbler singing - but a bit more along the west side. Another female-type Marsh Harrier flew over at 9.40 (different to Saturday's bird, ie no feathers missing), and along the path a Lesser Whitethroat, 5+ Common Whitethroats and 10 Linnets. More Whitethroats, a Lesser Whitethroat, a single Reed Warbler, 5+ Sedge Warblers and 2 Reed Buntings were along the Long Pool, and at least 15 Whimbrel, 20 Curlew and 5 Black-tailed Godwits were in the harbour. (AH) 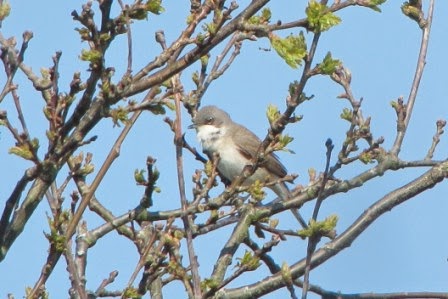 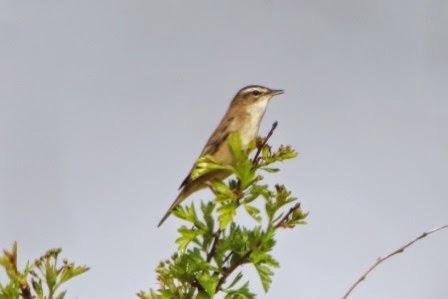 Pagham Spit: News from Trevor Guy's Pagham Birder blog of a Short-eared Owl flushed from the spit this morning. (AH)
Posted by Andrew House at 13:07