Saturday, 26th April: A promising-looking day for sea-watching, with a strong southerly-based wind and a weather front with early morning rain. The rain soon gave way to sunshine and cloud, staying dry until mid-afternoon when occasional showers returned. At the Bill there was once again a flurry of passage for the first few hours, before it disappointingly died away, to early afternoon at least. Ten Bonxies and five Arctic Skuas, plus about 150 Commic Terns, somehow seemed scant reward for the conditions and the morning's effort, not helped by news of a much larger movement at Dungeness. Other impressive totals from East Sussex showed that good numbers of birds either passed us here just too far out, or perhaps crossed over from mid-Channel, but either way we missed out on a good deal of excitement.... but our day will come! (OM).  Log follows below ... 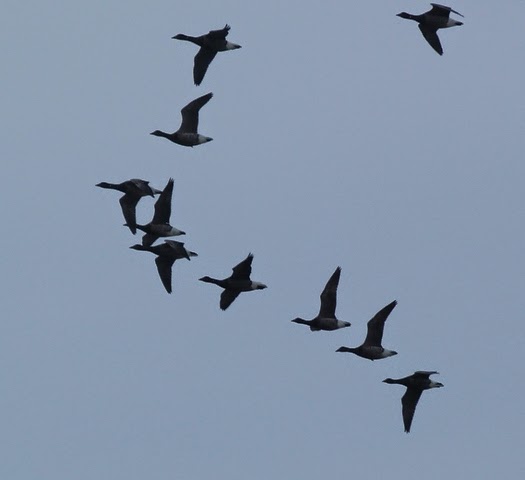 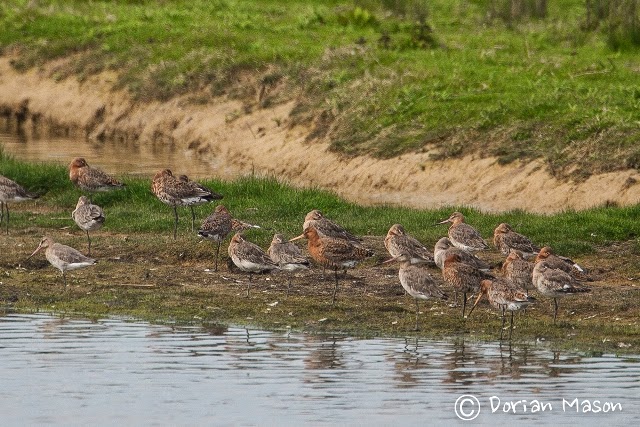 Black-tailed Godwits on the Ferry Pool: (above) D. Mason and (below) S. Russell 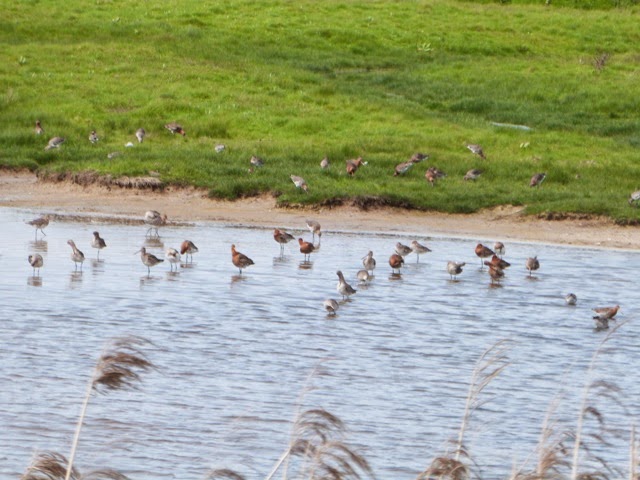 Church Norton: On a regular walk to Norton, SH logged the following: a Wheatear, 5 Cetti's Warblers, 12+ Chiffchaffs, 2 Blackcaps, 6 Swallows, 10+ Whitethroats, Reed and Sedge Warblers heard (SH).
This morning there was an Eider offshore and a Fulmar went west, close inshore, and in the harbour/ offshore 5+ Little Terns, 10+ Common Terns and 10+ Sandwich Terns were present. Also in the harbour there was a flock of 15 Whimbrel roosting together and similar of Bar-tailed Godwits. This afternoon 3 Greenshanks were in Ferry Channel and the same numbers of the previous species on the mud. (AH) 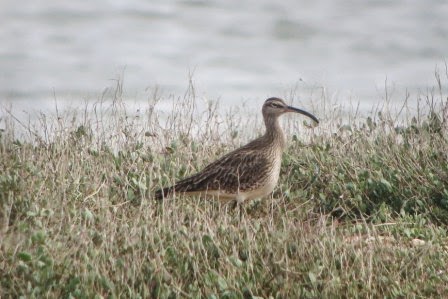 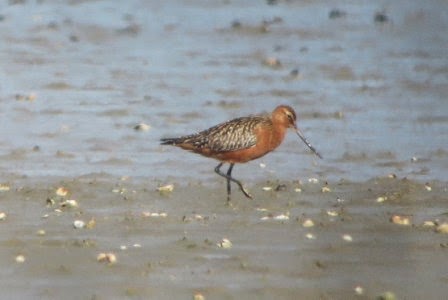 Chi GPs: Ivy Lake: A Swift and 6 House Martins high over the lake this morning, and 11 Common Terns present (CRJ).
Friday, 25th April: What a difference 24 hours makes! Cool, very wet and dismal this morning, but not bad enough to put off a few hardy souls ..... though perhaps it should have done. (AH). I arrived at the Bill at 0715 to find a very wet JA huddled against the wall, having been there since 0525! Passage had been minimal and after nearly a couple of hours more watching, and a visit by AH, hopes that the continuous heavy rain would ease were dashed - if anything the rain got heavier. Both JA and AH left mid-morning, and so I found myself alone, but working on the theory that faint heart never won fair maiden, I decided to give it a bit of a go, despite the conditions and the NW wind. This involved watching from under an umbrella, or the car, so was it worth it? Well I lasted until 1255hrs (making an overall coverage time of some seven and a half hours!) and I wish I could report something good, but in truth it was fairly dire - the only highlight being a nice flock of 12 Little Gulls moving east. Otherwise the sea produced just a few Commic, Sandwich and Little Terns, a fly-by from the regular Long-tailed Duck and a mere handful of waders, whilst incoming migrants were non-existent save for a bedraggled Wheatear and a Willow Warbler in the gardens. Oh dear! But I'm home now, drying out and preparing to be back tomorrow, for things can only get better (OM). 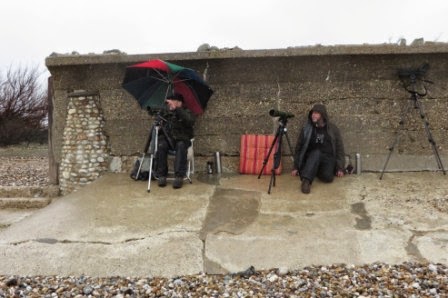 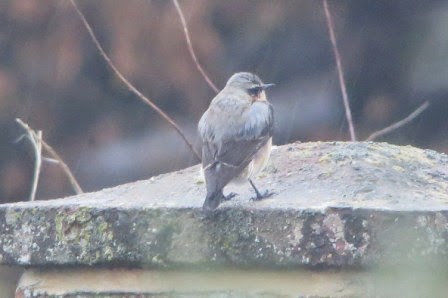 Wheatear in the rain (above) & Fulmar at the Bill (AH) 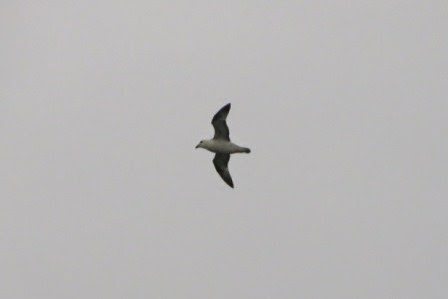 Church Norton: A quick stop in the pouring rain produced little, bar 8 Whimbrel and 4 Curlews on the spit in the harbour. (AH) 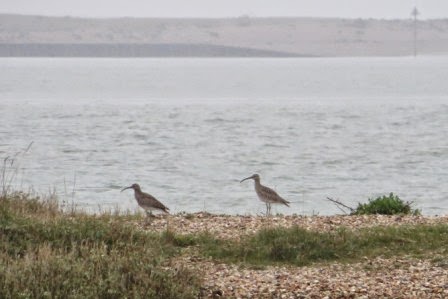 Thursday, 24th April: A calm, still and slightly misty start this morning with little or no breeze ..... sunny and fairly warm later.


Church Norton had 8 Willow Warblers, 2 Common Whitethroats and 3 Sedge Warblers at the Severals, also a Cuckoo flying around the Priory (BFF/DIS/DM).
A late afternoon walk along the Long Pool produced a male Whinchat, a Reed Warbler, a Lesser Whitehtroat and several Sedge Warblers and Whitethroats, plus a Greenshank and a Kingfisher in the creek. (AH)
Medmerry (West Sands-Breach): The female Eider - presumably the one that has been lingering off the Bill and Church Norton recently - was in the breach mouth again this morning. Also 3 Wheatears, 1 Greenshank, 1 Whimbrel, 1 Little Ringed Plover and a few Linnets and Meadow Pipits about, though the new pools were mostly frustratingly devoid of birds. (AH) 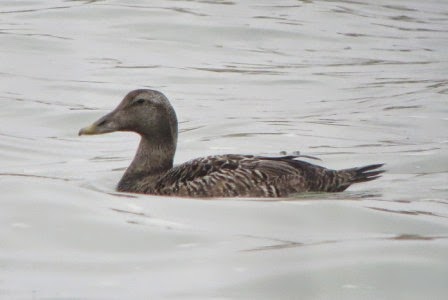 Female Eider at Medmerry (AH)
Pagham Lagoon & Spit: A visit to the east side of the harbour was quite productive this morning. Our old friend, the Iceland Gull, seemed in no hurry to head north from the Lagoon, and on the spit there were 3 Whinchats, including two stunning male birds, a Wheatear, a Lesser Whitethroat and 20+ Linnets. Two Little Terns and two Sandwich Terns were in the (old) harbour mouth and 3 Mediterranean Gulls flew over, but there were generally rather few waders in evidence. (AH) 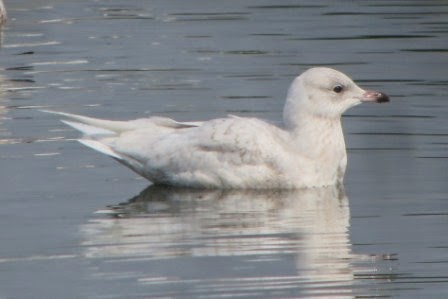 Iceland Gull (above) on the lagoon & Whinchats on the spit (AH) 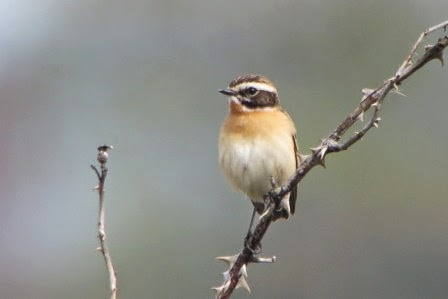 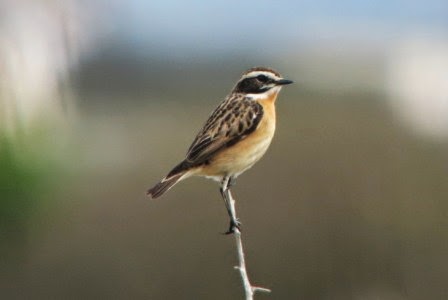