Easter Sunday, 20th April: A change to cloudy and overcast conditions, with a blasting, cool north-easterly and the forecast of heavy rain later. First news today is from SR, out and about early, reporting that the Ring Ouzel is still present at 6.30am! 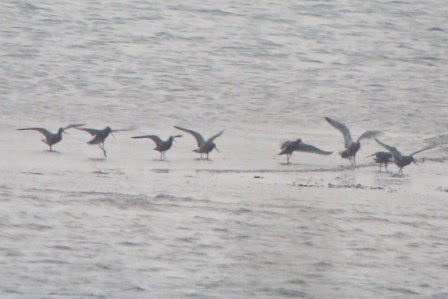 Bar-tailed Godwits briefly stopping in the gloom at the Bill (AH)
An afternoon seawatch produced an Arctic Skua and a couple of Bonxies. Log below... Also a seal close inshore, and opinion was favouring Grey Seal. Any comments on pictures below appreciated. (AH) 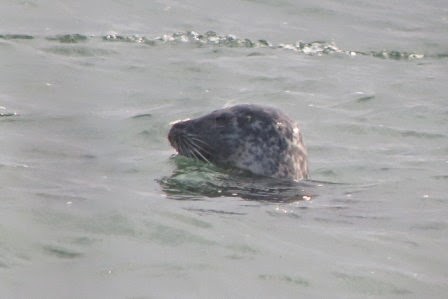 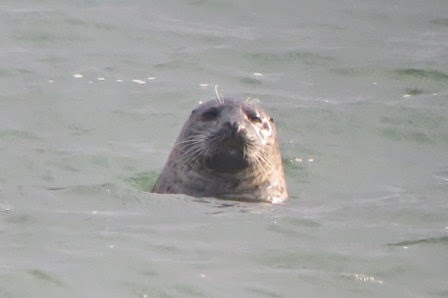 Medmerry: (West Sands) A Little Ringed Plover near the rubble heaps, and a few Linnets and Skylarks about. (BI)
Ferry Pool area: 2 Avocets, 4 Gadwall & 3 Shoveler present on the pool. (SR) A Greenshank over Long Pool (CRJ) 3 Blackcaps and a Chiffchaff around the Visitor Centre. (BI)
This afternoon 5 Black-tailed Godwits on the Ferry, a Snipe over the Long Pool, 2 Brent Geese, 7 Whimbrel and 3 Grey Plovers roosting on the exposed islets and 4 Sandwich Terns feeding off the spit. (AH) 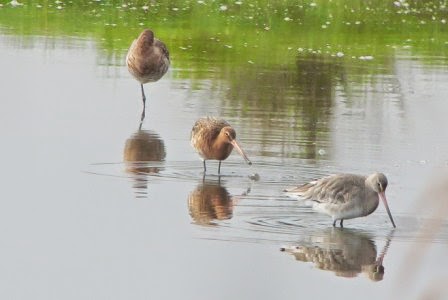 Black-tailed Godwits on the Ferry (AH)
Church Norton: 2 Whimbrel, 2 Bar-tailed Godwits, 4 Grey Plovers and 80+ Dunlin in the harbour, plus a Blackcap and a Jay in the churchyard. (BI/AH) 6 Blackcaps in the Bluebell Wood (S&SaH) 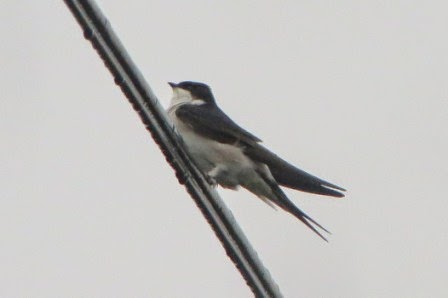 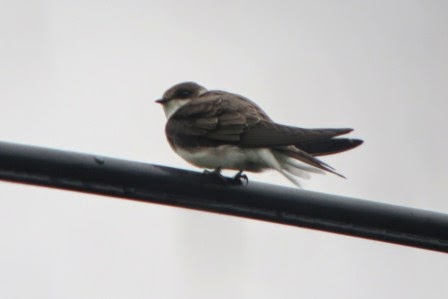 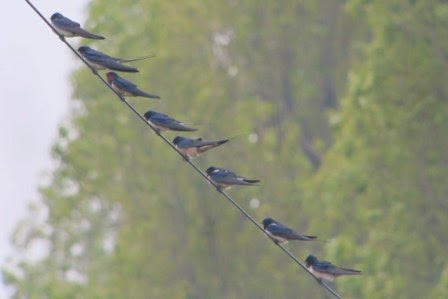 A mix of all three at Westhampnett Pit (below) (BI) 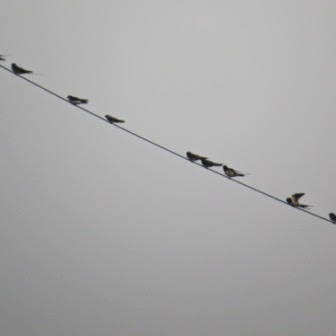 Saturday, 19th April: The chill north-easterly persists, with cloud cover building during the morning......but by evening the first Pom Skua of the season had been logged... and no I wasn't there! (OM).
Selsey Bill: Still slow - a Bonxie and an Arctic Skua east this morning, and a few terns, but not much else. (AH) Then a late afternoon watch by the real locals stole the show and produced a Pom Skua east along the 'mile basket' line at 1725hrs and also a Bonxie and a couple of Little Gulls... game on! (JA/SH).

Selsey, Warner Lane: The Ring Ouzel still present this morning. (SR)
Ferry Pool: The Garganey was reported as present very early this morning, but not seen subsequently. A female-type Marsh Harrier appeared from the south at 9am, before gaining height and drifting off over the harbour. Otherwise it was quiet - a Reed Bunting, a Stock Dove, 2 Avocets, a Little Grebe, 5 Gadwall (4 drakes), 4 Teal, 3 Shoveler and 25 Shelducks being about it. (AH/GH/OM) 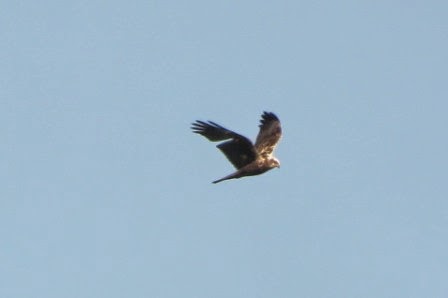 Marsh Harrier over the Ferry (AH)
Long Pool: A Cuckoo was in the bushes at the far end, upsetting a pair of Meadow Pipits, and another one was calling from the Tramway. A Lesser Whitethroat and several Whitethroats along with 4-5 Sedge Warblers were seen/heard from the path, and the near summer-plumaged Spotted Redshank, a Greenshank and 2-3 Whimbrel were in the channel. (AH/GH/OM) 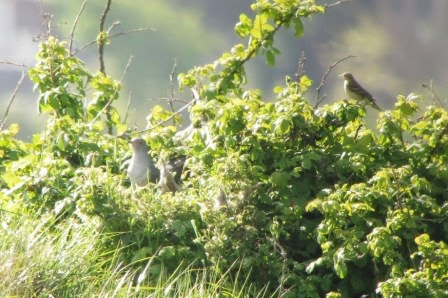 Cuckoo & Meadow Pipit on the west side (AH)

Walk from Golf Links Lane to Medmerry banks, east side:  A brief visit fitted in this afternoon, it was bit of a shock to see large areas of the banks that had previously been green and verdant are now brown and quite dead, it looks as if they've been sprayed.  Also, some members of the public were being a little dim, one lady managed to climb over the barbed wire fence and walk along the new shoreline (see pictures!).  Not very good birding conditions. Sightings: 1 Reed Bunting, 22 Skylarks, 16 Linnets, 2 Blackcaps, 3 Whitethroats, 1 Lesser Whitethroat, 1 Kestrel (SR) 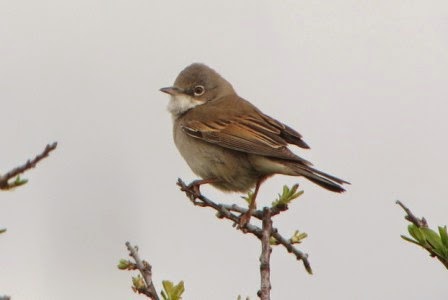 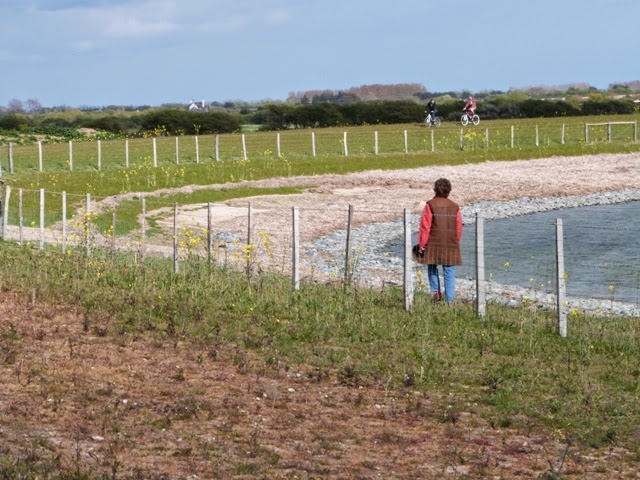 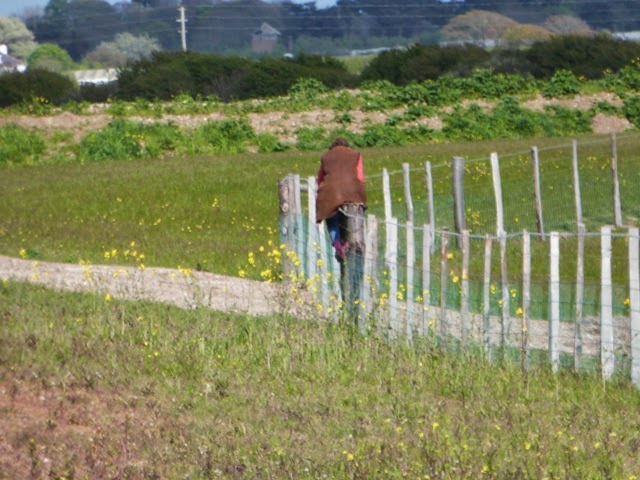 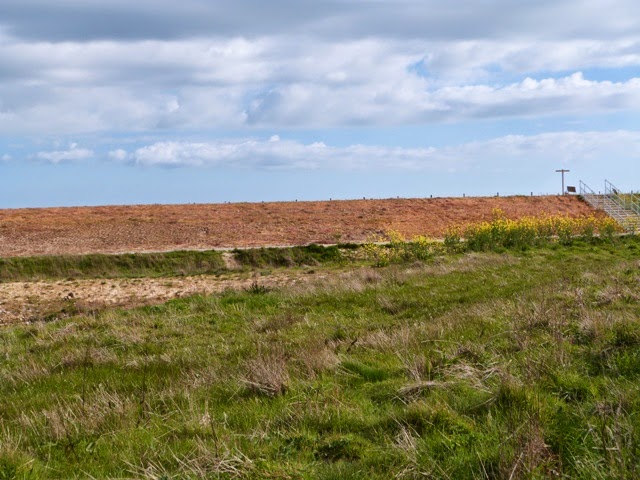 Good Friday, 18th April: Sunny and dry but with a fresh E/NE wind; the start of the Easter holiday, which should see plenty of observers out and about on the Peninsula, so let's just hope the birding lives up to expectations. First news today is that the Ring Ouzel at Warner Lane Selsey is still present for its fifth day (SR) and a drake Garganey is on the Ferry. Potentially much rarer however is belated news of a rare dark form of Fulmar - known as blue Fulmar - photographed by a fisherman off Selsey Bill last month. Whilst 'blue' Fulmars do occur in British waters, this bird may have come from much further afield...... an update appears below:-

Unusual Fulmar off Selsey Bill on 17th March 2014: The following information was provided by Paul James following contact from local Selsey fisherman and occasional birder Chris Wilson. It seems the information originally appeared on the SOS website but it somehow escaped OM/AH at the time so did not appear in these pages. I have no knowledge  or experience of such rare forms of this species, so can do no better than to attach the emails from PJ which are self-explanatory, and the photos from PW; I am very grateful to both for their information (OM) 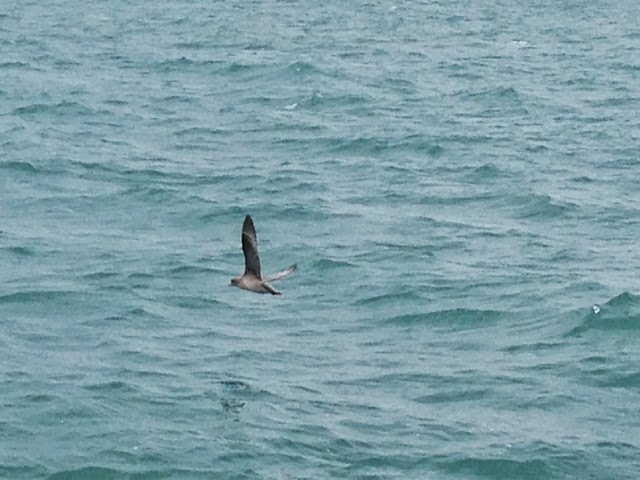 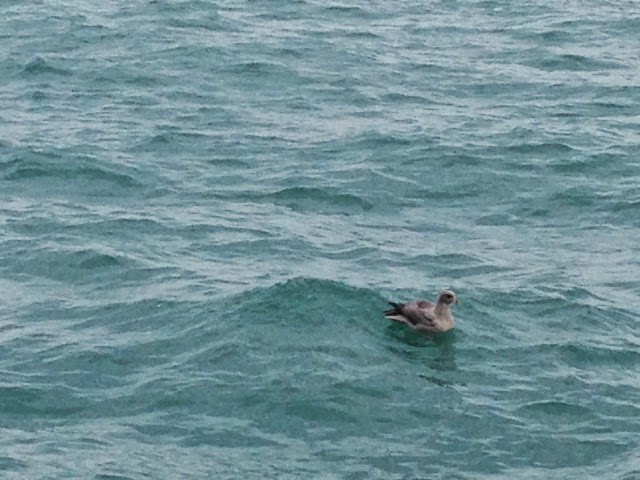 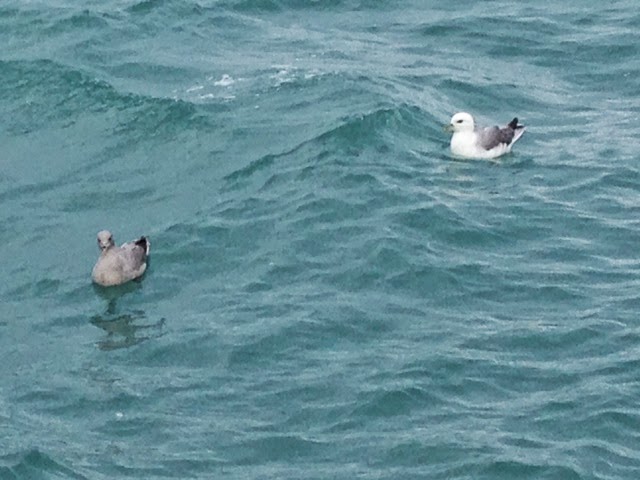 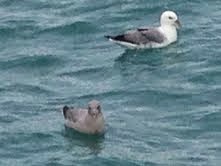 (all photos copyright C. Wilson)
Hi Chris, I've done some more research into Blue Fulmars and am now of the opinion that your bird of 17th March may be something quite special. Have a look at this website http://birdingfrontiers.com/2011/05/19/the-blue-fulmar-pelagic/ and you will see a photo of a so called ‘double dark’ Atlantic Blue Fulmar which bears a striking resemblance to the bird you had. The ‘True Blues’ are birds of the High Arctic (Svalbard, Franz Josef Land, Novaya Zemlya etc) so assuming it is one, it's a very long way from home and potentially an exceptional record for the English Channel. I have sent your photos to Martin Garner of Birding Frontiers for his comments and will keep you posted of any developments.
I've had a reply from Martin Garner who confirms that your bird is in his words 'quite a striking double dark Atlantic bird'. As I mentioned previously, 'true blues' are birds of the High Arctic with a major feeding ground being the Barents Sea. Martin is only aware of a handful of other records for southern England from Devon, see http://birdingfrontiers.com/2011/06/17/atlantic-and-pacific-blue-fulmar/ for some photos.  Paul James.
_________________________________________________
Selsey, Warner Lane: The Ring Ouzel was still present from 0720hrs (SR).


Ferry Pool: A drake Garganey put in an appearance this morning though, as is seemingly typical, it was either asleep or feeding at the very far end. Otherwise 5 Avocets, a single Black-tailed Godwit, a Little Grebe and 2 pairs of Gadwall present. (AH) 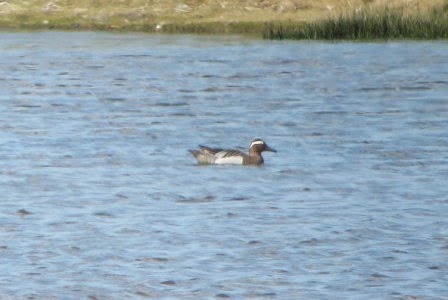 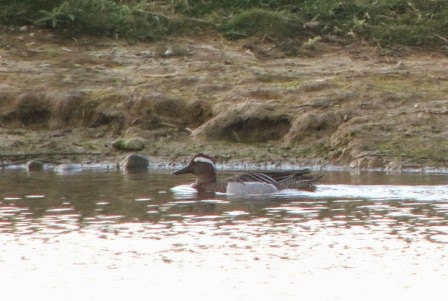 Garganey (above) and Little Grebe on Ferry (AH) 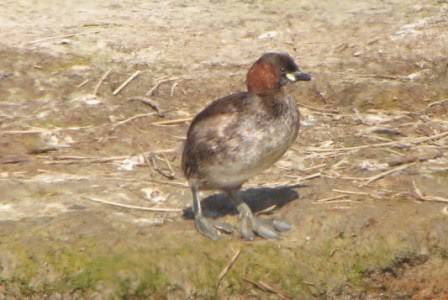 Church Norton: Pretty quiet - one or two Whimbrels in the harbour (BI), a few Blackcaps and Chiffchaffs about, and a Reed Warbler and at least 4 Sedge Warblers in the Severals (S&SaH)
The small area of woodland next to the last Several held 1 Sparrowhawk, 3+ Blackcaps, 1 Willow Warbler, c.5 Chiffchaffs and at least 2 Cetti's Warblers....also a request: could birders along this part of the beach (opposite the last Several) keep an eye open, at low tide, for a stray fishing net that has come away from its floats.  Luke Dray and Bart Ives found it on the beach but the tide claimed it before they could do anything about it; the net has a fine mesh and could all too easily entrap seabirds (SR).
Late afternoon there were at least 6 Whimbrel in the harbour, along with a Bar-tailed Godwit, 30 Curlew, 60+ Dunlin and 20+ Ringed Plover. (AH) 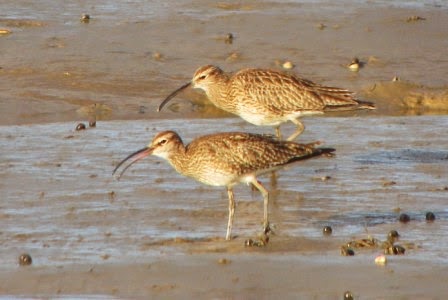 
Long Pool: A Lesser Whitethroat showed briefly, plus at least ten Common Whitethroat and 4 Sedge Warblers. Looking back towards the Ferry Pool along the mud creek from the top of the long pool we located two Spotted Redshank, one almost in summer plumage and the other partial moulting. (IP/PB/CN)


Medmerry:
West Beach: 5 Wheatears, 7 Linnets, 5 Meadow Pipits, 9 Shelduck, 2 Curlew, 8 Lapwing, and 1 Corn Bunting, singing for a short time from what remains of the greenery on the rough 'building site' ground (SR). Also seen were a female Redstart and a Whitethroat. (SR)
Easton Lane westwards: At Earnley Pools we heard a Yellow Wagtail fly over (unseen), and there was also a Whinchat and 2 Wheatears along the fenceline there, plus Lesser & Common Whitethroat in the area. The 2 Avocets were present, but little else of interest was on the pools. (IP/CN)

Ivy Lake: A fairly brief look at lunchtime produced a Hobby in amongst a swirling mass of Swallows, and there were three Common Terns over the water. (AH)
Posted by Birderowen at 08:04