Monday, 14th April: Another dry, bright morning with a light-moderate NW wind - after a clear moonlit night - promising little on the sea and apparently little in the way of coastal migrants either. But some days can be deceptive and this was one of them, for despite the unlikely prospects it soon became obvious there was a considerable fall of night migrants on the southern end of the Peninsula; nothing rare, but a good selection that made the morning quite exciting. Redstarts everywhere! More of the same please!
Selsey Bill (0720-1010hrs): Bright and sunny, wind cool NW 3, good vis. (Obs: SR/OM/AH/BFF/DS): Still next to no sea passage, but more than compensated for this morning by an unexpected fall of at least seven Redstarts in and around the gardens, along with a Common Whitethroat, 2 Wheatears, 2 Blackcaps, and some Chiffchaffs and Willow Warblers. Full log follows below... 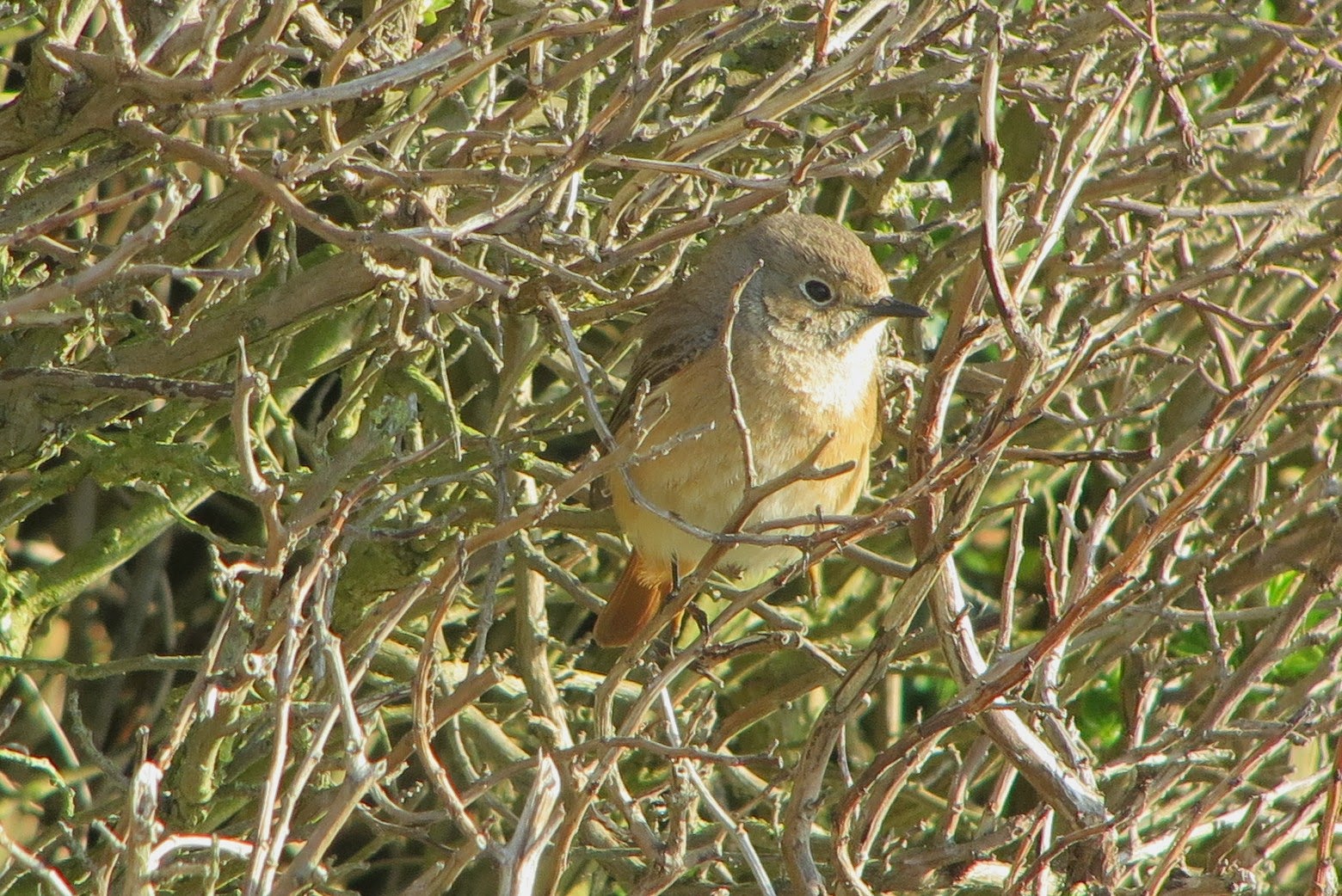 Three different Redstarts and a Wheatear (bottom) at the Bill (AH) 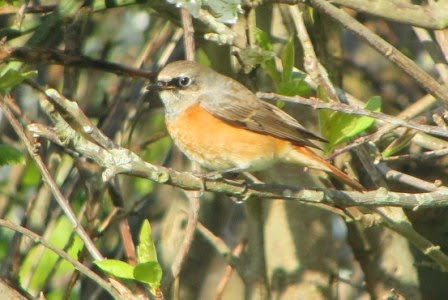 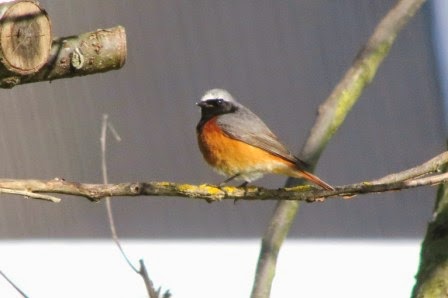 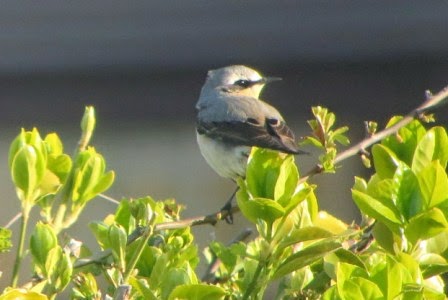 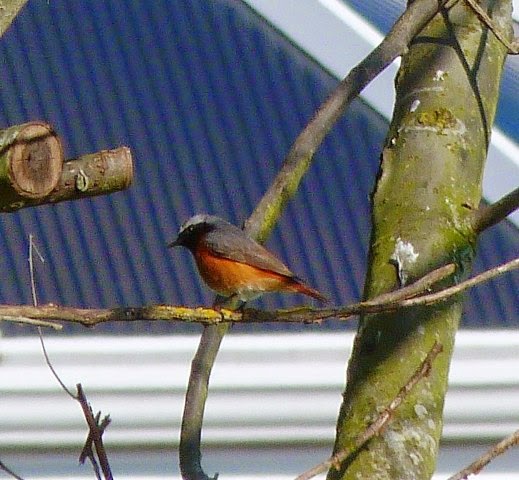 
Selsey: Warner Lane: A Ring Ouzel in the horse paddocks this morning well found by SR soon had the locals scurrying for a look, when it eventually became apparent there were two birds present - along with a Whinchat and another Redstart. (SR) Ring Ouzels, Whinchat & 2 male Redstarts still present early evening. (SH) 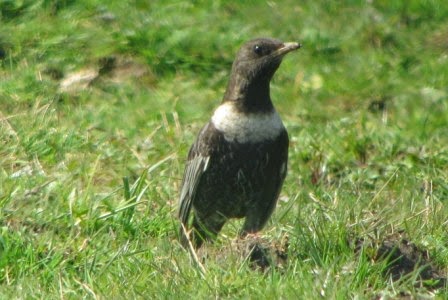 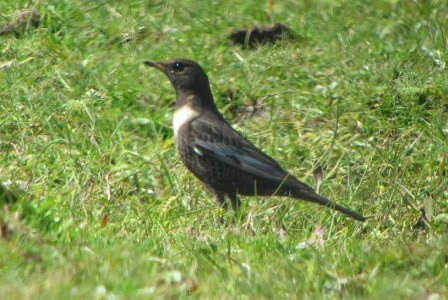 Ferry Pool: Five Avocets this morning, along with a pair of Wigeon and four Gadwall. Also IL reports that half a dozen each of Lapwing and Redshank are nesting on the field which is good news, too. (AH)


Church Norton: The two Spoonbills were roosting in the harbour again this morning. Also another male Redstart was in the hide/churchyard area, along with the Nuthatch (heard but not seen) two Peregrines flew over together and 80-100 Dunlin flew up through the harbour. (AH/CRJ)  Later, further along the West side, a Whinchat was located (TG-P). 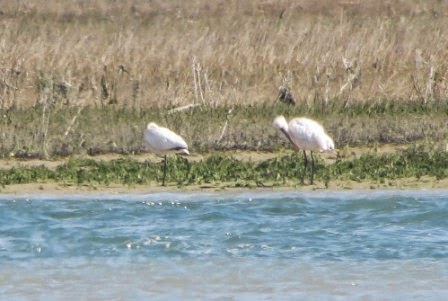 North Wall: Two more Common Redstarts reported here, too (per Birdguides) .. not sure if the same, but 2 Common Redstarts, a male & a female, in the horse paddocks this afternoon along with a White Wagtail (BI).

Medmerry: Easton Lane - Earnley flood pools:  A Little Ringed Plover, a Dunlin and 5 Avocets were present, together with 10 Tufted Duck, 4 Teal, 2 Gadwall, 4 Canada Geese and (to coin a BFF phrase) 2 'bilge' geese in the shape of an almost-Barnacle and a small and imperfect 'Canada Goose' type - perhaps the less said the better! Also logged were 10 Swallows, 2 Sand Martins, a House Martin,  8 Meadow Pipits, 3 Whitethroats, 15 Linnet, 2 Wheatears and 3 Yellowhammers. (OM/BFF). 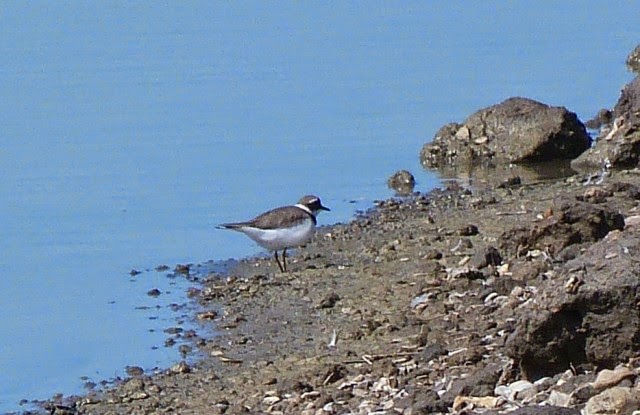 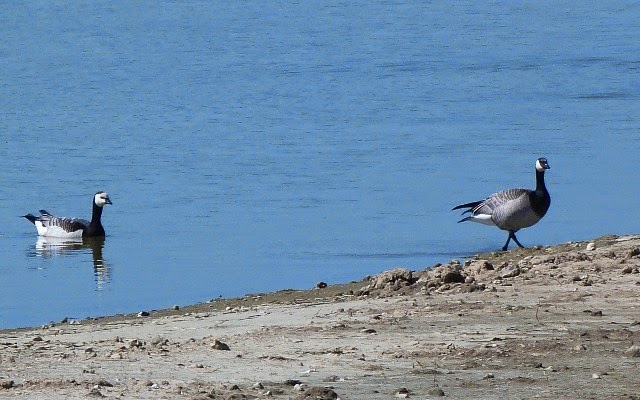 Church Norton: A walk to Norton from Selsey East beach (0845hrs) produced the following:- Peregrine - 2, Sparrowhawk - 3, Buzzard - 4, Common Sandpiper - 1 (from Severals into Hbr), House Martin - 1, Swallow - 20+, Blackcap - 20+, Chiffchaff - 20+, Willow Warbler - 2 and Common Whitethroat - 1. (S&SaH/PB)
Also seen/heard were a Lesser Whitethroat by the Severals (IL) and a Cuckoo from the churchyard, 6 Whimbrel, 2 Black-tailed Godwit and 3 Sandwich Terns were in the harbour, a Peregrine flew over and the 2 Spoonbills were roosting by the New Island at high tide. (AH) 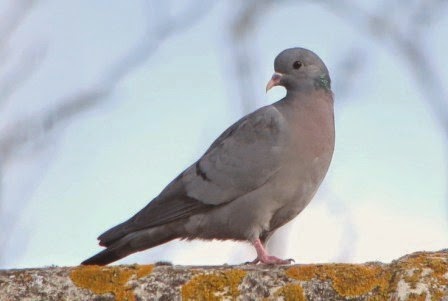 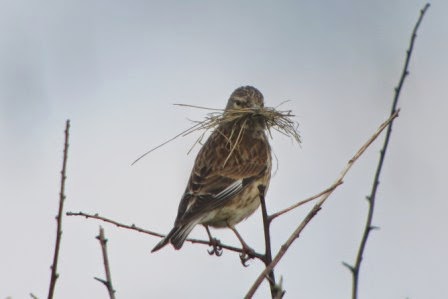 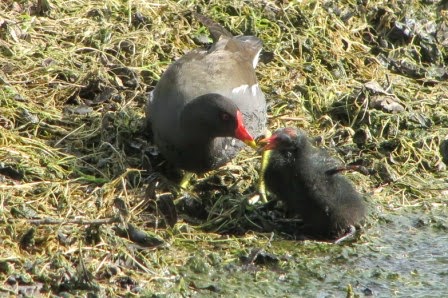 Ferry Pool: A Ruff was on here yesterday & again this morning (IP), plus 4 Avocets and 2 Wheatears today. (AH)
Yeomans Field: The male Common Redstart appeared for about 2 minutes along the fence at the bottom of the field, I waited a further 45 mins. or so for it to return but had no luck. Also present there were 6 Blackcaps, 4 Cetti's Warblers, 2 Linnets, 5 Swallows, 1 Green Woodpecker and a Cuckoo heard but not located. Several more Blackcaps and Cetti's Warblers along the tramway, too. (SR)﻿

Medmerry: Firstly a report from IP & RW -
Highlight was a Great White Egret seen flying high over the Earnley Pool at 9.30am heading West - we presume from the angle that it may have arrived from the sea, but we cannot be certain as it was only located after it had flown over us. Otherwise the following were seen -
Buzzard - 3
Sparrowhawk - 1 (male)
Avocet - 3
Dunlin - 5
Green Sandpiper - 1
Redshank - 5
Black-tailed Godwit - 1
Little Gull - 1 (1st yr)
Green Woodpecker - 1
Barn Swallow - 6
Tree Pipit - 1 display flying
"White" Wagtail - 3
Wheatear - 3 (1 male, 2 female)
Corn Bunting - 1

PH reported a further two Corn Buntings to the east of the reserve, and a Wheatear there, whilst I found a further 3 or 4 birds to the north, along with half a dozen Yellowhammers. It would seem that there are at least 3 or 4 singing males around the new reserve which is very encouraging after the disturbance of the last year or two and, with plenty of new areas of suitable habitat being created, hopefully they will continue to prosper. (AH) 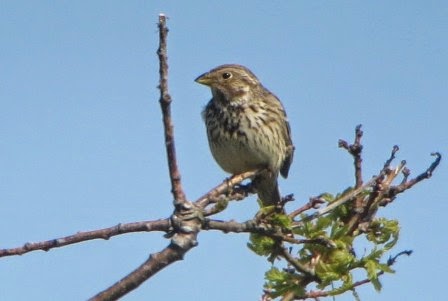 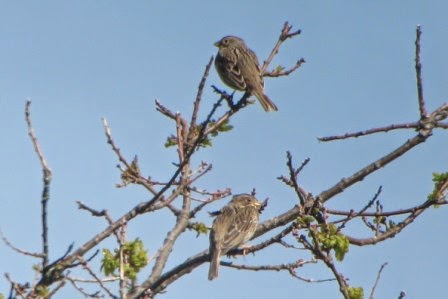